10-Minute Recipe for a Party: Cherry and Goat Cheese Crostini

Because breaking out the grill is reason enough to celebrate, summer is party season. It’s also cherry season, so use the fruit to make some phenomenal crostini that will have your guests wowed before they even get to your perfectly grilled burgers. But what if you want a crowd-pleasing appetizer you can make any time of year? This recipe still has you covered because you can just as easily use frozen cherries. We’re not saying this 10-minute recipe is perfect, but it’s close. 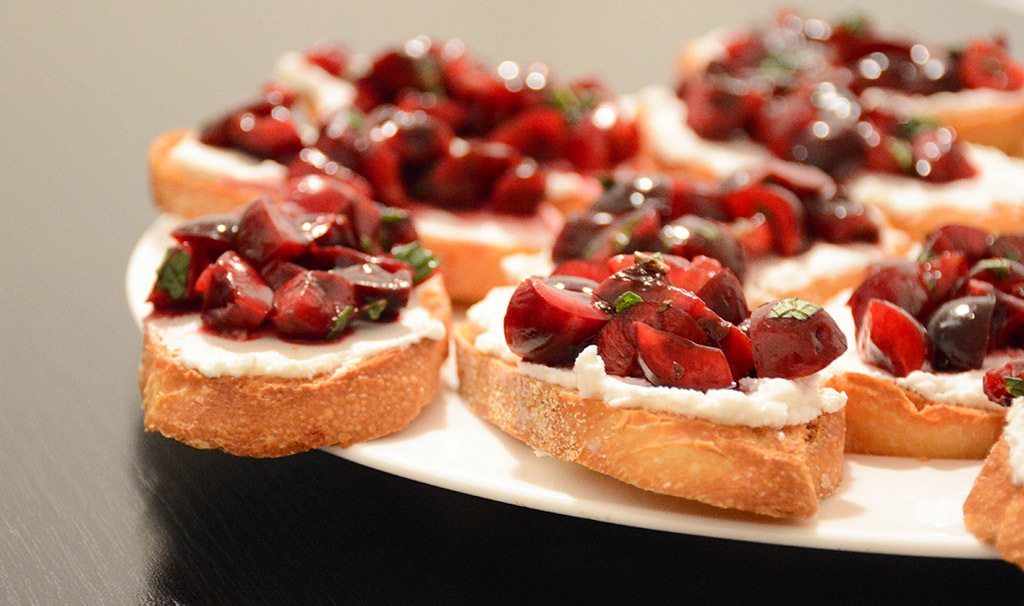 Like most popular types of produce, cherries stick around for an irritatingly short amount of time every year. We’re all for cooking with what’s available at the farmers’ market, but it’s hard to get excited about seasonal cooking when you’re left with little besides potatoes and onions leading up to a winter get-together. We got around the issue by crafting an appetizer that uses macerated sweet cherries, which works with both fresh and frozen fruit, plus staples you can always find at the grocery store. These crostini are also designed to be super simple, because every host should get to have fun at his or her own bash.

Before you get started with anything else, preheat the broiler so it’s ready to toast when you are. For the actual bread, a baguette is the best choice because it creates the perfect size when sliced on the bias. That being said, you can always substitute with another variety of bread. Just be sure to choose a good-quality loaf that has a nice crust. If you go with something larger, you’ll want to cut the slices into halves or quarters to keep the size manageable for an appetizer.

Let’s talk pitting cherries for a second. If you’re using frozen fruit, you don’t even have to worry about it since the cherries get pitted prior to packaging. For those of you using fresh fruit, you have a few options. Using a cherry pitter is the most obvious answer, but it’s a little silly to invest in one if you don’t go through tons of cherries every year. The Kitchn highlights three alternative methods that work just as well. We’re partial to using a chopstick to push the pit out.

Once you’ve pitted and chopped the cherries, the topping comes together super fast. Just toss the fruit with a bit of salt, lemon juice, honey, and some fresh mint. Frozen cherries are already pretty wet, so you may want to drain off some of the extra moisture before adding the other ingredients. You can make this mixture a few hours in advance if you’d like, but hold off on adding the mint until closer to when you want to serve.

When you’re ready to toast the bread, give each slice a little drizzle of oil to help it brown. Stick with one side so they don’t end up greasy. Using the broiler makes this go super fast, but it also means you have to flip the slices halfway through to ensure sure they fully toast on both sides. They go fast, so don’t be tempted to walk away during this step.

After the toast is cool enough to handle, give each one a good smear of goat cheese. Not a goat cheese fan? Ricotta is another great option for folks who like something a bit milder. Even cream cheese will work. Add your cherry topping to this 10-minute appetizer, then it’s time to eat. 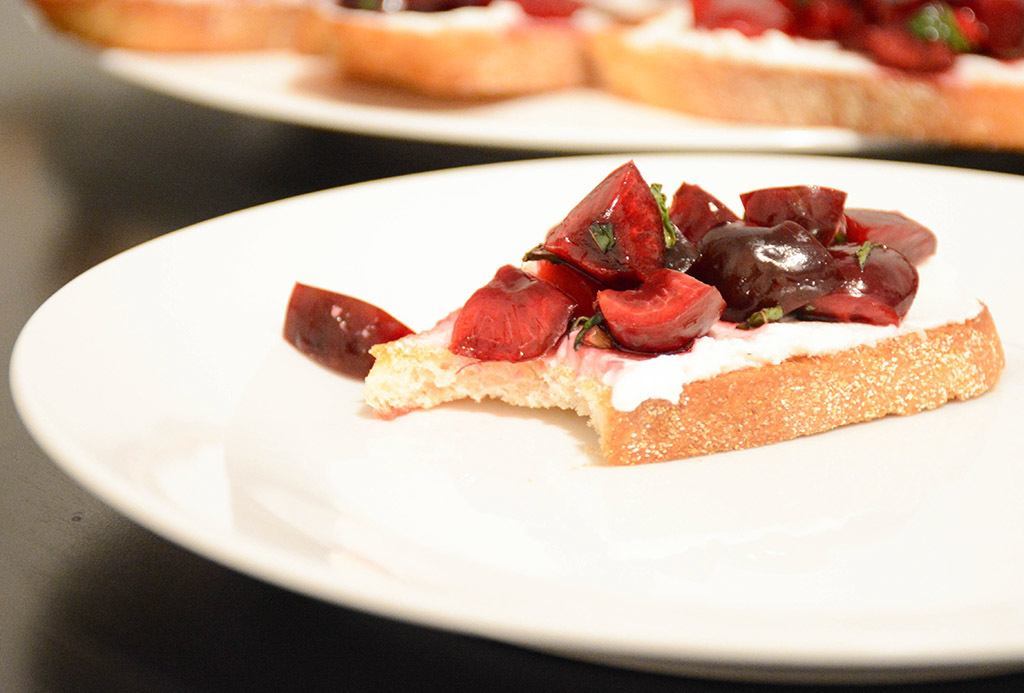 If you want to make things even easier on yourself, set up a DIY crostini station. This works particularly well for larger gatherings when you don’t have time to assemble 50 crostini. Just set out a platter of the toasted bread, some softened goat cheese, and the macerated cherries. This recipe makes 12 crostini.

Directions: Preheat broiler to high. Toss cherries with lemon juice, honey, and a pinch of salt until well combined. Add mint and lightly toss once more.

Drizzle one side of each bread slice lightly with olive oil and season with salt. Arrange on a baking sheet and broil until golden on one side, about 1 to 2 minutes. Flip bread slices over and continue to broil until second side is golden, about 1 minute longer. Remove from oven and let cool briefly.

Evenly spread goat cheese over oiled side of each piece of toast. Top with cherry mixture, dividing evenly, and serve.