100,000 Acres Burned by More Than a Dozen Deadly California Wildfires

Seventeen separate California wildfires continued to devastate northern part of the state Tuesday, with at least 15 people killed and more than 100,000 acres burned, much of it in wine country. 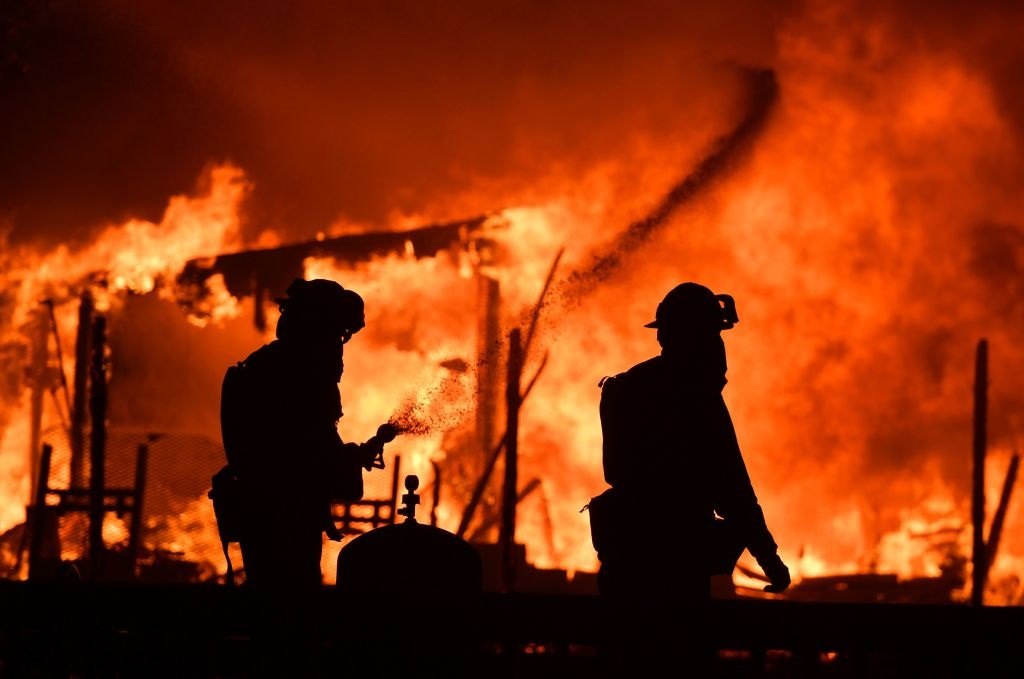 Firefighters douse flames as a home burns in the Napa wine region in California on Oct. 9, 2017, as multiple wind-driven fires continue to whip through the region. | Josh Edelson/AFP/Getty Images

The area burned to date in Napa and Sonoma is three times larger than Washington, D.C. in size, CNN reported, adding that 20,000 of the acres were burned in a 12-hour timeframe on Monday. The fires are burning over a 200-mile region and are among the deadliest in California history.

More than 100 people were injured and 2,000 structures were destroyed. The outbreak of wildfires was fueled by dry conditions and strong, 50 mph winds. The fires tore through forests and residential neighborhoods. Smoke was sent as far as San Francisco, located around 60 miles away.

A total of 25,000 residents were evacuated as a result of the fires. “These folks have lost everything,” Cal Fire Director Ken Pimlott said Tuesday at a news conference. “When you look at the destruction, it’s literally like it exploded. Some of these folks were literally just sleeping at home in bed and had no idea.”

Missing persons were being sought among ruins and rubble by family members and friends. Lack of cell service was hampering search efforts.

The city of Santa Rosa was devastated by the Tubbs wildfire, in particular the neighborhood called Coffey Park. This fire broke out Sunday night in Castiloga, Calif. and spread south into the Santa Rosa neighborhoods. Photos of the destruction in Santa Rosa were tweeted Monday and Tuesday:

It's like a nuclear attack. This is Santa Rosa. pic.twitter.com/Xp2GEx8tO3

Before & After image of a neighborhood affected by #TubbsFire in Northern Santa Rosa. @lookner pic.twitter.com/etr6Ahz6Yg

Wildfires left this neighborhood in Santa Rosa, California, unrecognizable for a resident driving back through. https://t.co/r9M2pcFEQ9 pic.twitter.com/j6Wrw09Sgr

Meanwhile, a separate fire Tuesday caused mass evacuations near Disneyland. The fire started Monday morning in Anaheim, Calif. Like the northern California fires, it moved quickly, fueled by strong winds. Between 3,000 and 4,000 residents were evacuated. Those near the theme park shared photos on Twitter:

this is so sad. i took this in july the second one is today. #CaliforniaWildfires #PrayForCali pic.twitter.com/PfoKYXQdb4

According to a 2016 study conducted by Columbia University, wildfires in the western United States have gotten bigger over the past three decades. Hotter temperatures and drier conditions are partly to blame.