15 Surprising Things That Trump’s Body Language Reveals About Him 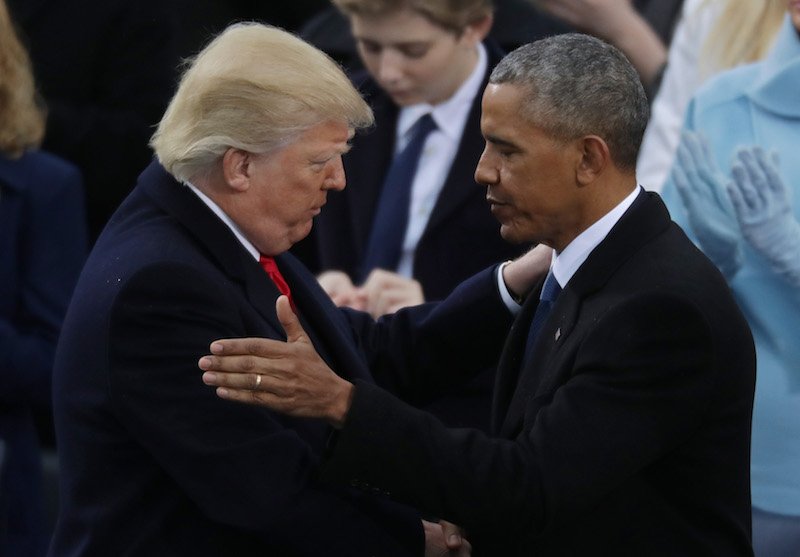 The majority of language is nonverbal.

Body language says so much more than words ever can. Whether you realize it or not, the way you stand, gesture, and even the look on your face can help form someone’s opinion about you. And no one has more suggestive mannerisms than President Donald Trump.

Trump may be known for the off-the-wall things he says (and tweets), but if you look closely, you can learn a lot about him based on non-verbal clues.

Let’s take a deeper look at the most surprising things Trump’s body language reveals about him, including one rare gesture most people don’t get to witness from Trump (No. 12).

1. He’s on a quest for dominance

Donald Trump’s body language shows that he sees himself as the alpha male in almost every situation.

Every time you see Trump vigorously shaking hands with someone, walking slightly ahead of a group, or even pushing people out of his way, you’re witnessing a physical show of power and dominance. Regardless of what words are coming out of his mouth, the president is constantly showing his peers and the world that he’s in charge of whatever is happening around him with this type of body language.

Next: This personality trait is apparent.

You’ll find dozens of photos of Trump deploying what’s known as the “steeple,” a gesture where the fingers of one hand rest on the fingers of the other in a triangle-like pose. According to Allan and Barbara Pearse’s book, The Definitive Book of Body Language, this move alone is proof of his extreme confidence.

“We found that the steeple was frequently used in superior-subordinate interaction and that it indicates a confident or self-assured attitude. Superiors often use this gesture position when they give instructions or advice to subordinates, and it is particularly common among accountants, lawyers and managers. People who are confident, superior types often use this gesture and, by doing so, signal their confident attitude.”

Next: He knows he’s the best.

It goes beyond just words — Trump’s body language is proof positive that he thinks very highly of himself.

As a celebrity turned politician, there’s no question that Trump had a larger-than-average ego to begin with. But one body language expert who’s been studying Trump for months noticed he’s been raising his hands higher when gesturing since he got elected president. This could indicate he has an even more elevated opinion of himself now.

Next: This is why words don’t even matter.

4.  He’s emphatic, even when he can’t find the words

Trump is known for making up words on the spot and even speaking in half-formed sentences and thoughts. One thing that rarely fails him? Hand gestures.

No matter what Trump is saying with his mouth, his hands are always moving to emphasize his points. Body language experts cite “weapon-like gesturing” such as karate chopping, giving a thumbs up or “A-OK” symbol, or waving fists in the air as further proof of Trump’s depth of feeling for whatever he’s talking about.

Next: He will literally push people out of the way.

5. He likes being the center of attention

President Donald Trump fights his way to the front at a NATO summit. | Bombard’s Body Language/YouTube

Who can forget the time Trump literally pushed his way to the front of a crowd of NATO leaders? It was the move which inspired thousands of internet memes. But this very move is quite typical for people with high opinions of themselves (like Trump).

Maybe it has something to do with being a celebrity — or maybe it’s just some innate trait. But Trump’s body language clearly shows that he likes being on camera and never shies away from the spotlight.

6. Not everyone is worth his time

One thing you’ll notice Trump doing frequently is ignoring certain people while paying close attention to others. In Trump’s world, either you’re worthy of his attention or you’re not. He once turned down a handshake with German Chancellor Angela Merkel during a meeting in the Oval Office. Some speculate that it’s because he feels uncomfortable in the presence of smart, powerful women.

Next: Here’s what’s really going on with Trump and his wife.

7. His relationship with Melania has changed

Look back on photos of the Trumps before Donald got elected president and you’ll see a very different version of the couple. Trump’s body language toward his wife is often protective, possessive, and proud. There’s also a lot of love and playfulness in the photos.

It’s a stark contrast to how his body language looks now. He’s a lot more rigid and formal with Melania and sometimes ignores her completely. It could be an indication that there’s a lot of stress and tension in their relationship or that they’re drifting apart.

Next: He’d be terrible at playing this one game.

It’s unclear whether Trump means to or not, but his face conveys a myriad of emotions. During meetings or events, it’s not uncommon to see him scowling, sneering, biting his lip, nodding, and smirking. It’s easy to see exactly how Trump feels based on facial expressions alone.

Next: There’s no denying this trait.

Love him or hate him, there’s no denying that President Trump has charisma. His smile is contagious and engaging. He’s also well-known for positive reinforcing behavior such as excessive head bobbing while speaking or listening.

Next: He knows who’s in charge.

It’s one thing to assert dominance — it’s another to believe that power is owed to you. Trump sees himself as superior to just about everyone else.

During the 2016 presidential debate, Trump positioned himself directly behind Hillary Clinton while she was answering a question about healthcare. The stance and positioning served as a type of warning and was a clear message to the candidate — Trump was asserting his power in a very physical way.

Next: He’ll let you know when you’re out of line.

11. He wants people to respect his authority

Few things irritate President Trump more than people not showing deference to his authority and power. Sometimes he avoids letting this happen by asserting control from the get-go.

One of the most common ways Trump accomplishes this is through a handshake “yank.” By pulling the other person toward himself while shaking hands, Trump is letting them know he means business — and he’s in charge.

Next: It’s surprising when Trump does this.

12. He has moments of submission

The State of the Union address | Chip Somodevilla/Getty Images

Not every move Trump makes is assertive or even aggressive. Occasionally, the president addresses the crowd with his palms open and out, which is a non-verbal sign of openness, honesty, and even submission.

Being president isn’t easy. Many former leaders admit to feelings of extreme stress and anxiety during their tenure that manifested physically.

Trump may be a confident leader, but he’s not immune to these stressors. Body language such as a hunched posture and a tense facial expression prove that he’s feeling the pressure of the presidency.

Next: Critics think this is often true.

The same “palms out” stance that can convey submission may also be an indicator that Trump’s lying about something. People attempting to hide the truth use the pose to appear honest even though they’re telling a lie.

Next: Here’s the most vital truth about body language, though.

Even the best body language experts in the world can’t decipher every single thing that Trump is thinking. Often the words the president is speaking don’t match up with the moves he’s making with his body or the look on his face. In those instances, it’s anyone’s guess which is accurate.

Read more: The Most Fascinating Things You Never Knew About Donald Trump’s Childhood