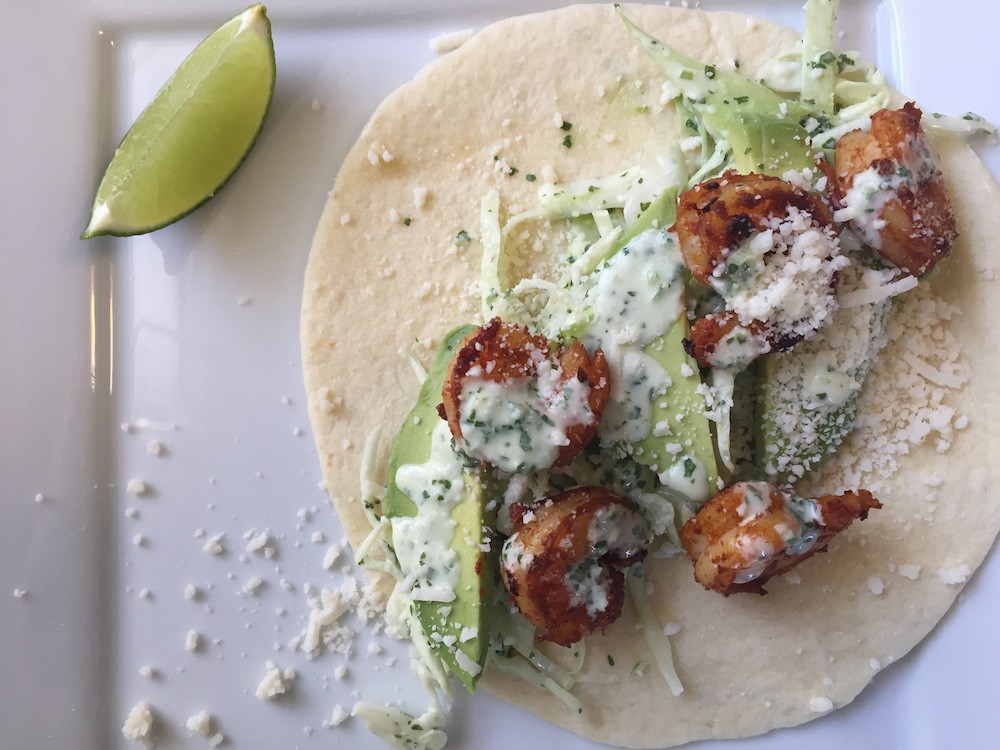 When it comes to simple dinner ideas, my brainstorming centers around three main categories: pasta, soups, and tacos. There are endless pasta possibilities, and pretty much any vegetable can become the backbone of a delicious stew or broth. Tacos are where I get stuck. Give me a flour tortilla stuffed with ground beef or shredded chicken any day — at least until I get bored out of my mind. After a while, even hot sauce becomes ho-hum.

My husband and I were on the sixth week of the same meat/rice/beans tacos when I went looking for an alternative. I had a bag of frozen shrimp in the freezer, and decided it was time to master the shrimp taco once and for all. Some versions have mango salsas or grilled shrimp, which are delicious in their own right, but I wanted a version I could make year-round. When I found a recipe for spicy shrimp paired with a cilantro-lime cabbage slaw, I had a feeling I’d hit the jackpot.

My tastebuds proved me right. The spices on the shrimp give them a healthy kick, which is simultaneously cooled with the “coleslaw” dressing of cilantro, lime juice, sour cream, and a few other basic ingredients. Thinly-sliced cabbage adds the perfect crunch that every taco requires, and slices of avocado add an extra hint of richness. Sprinkle cotija cheese over the top for a last punch of flavor, squirt with a fresh lime wedge, and you’ve got the freshest, most balanced taco you’re ever going to eat. It’s simultaneously satisfying and light — a perfect combination for summer meals, or for a detox when your fall and winter menus have been a little too indulgent.

The true advantage of these tacos, however, is how ridiculously easy they are to make. From start to finish, the recipe shouldn’t take longer than 30 minutes to prepare, but at least half of that time can be cut by finishing some of the preparations ahead of time. Cabbage and shrimp are incredibly healthy for you, these tacos are full of flavor, and you won’t waste a bunch of time in the kitchen. What more could you ask for? 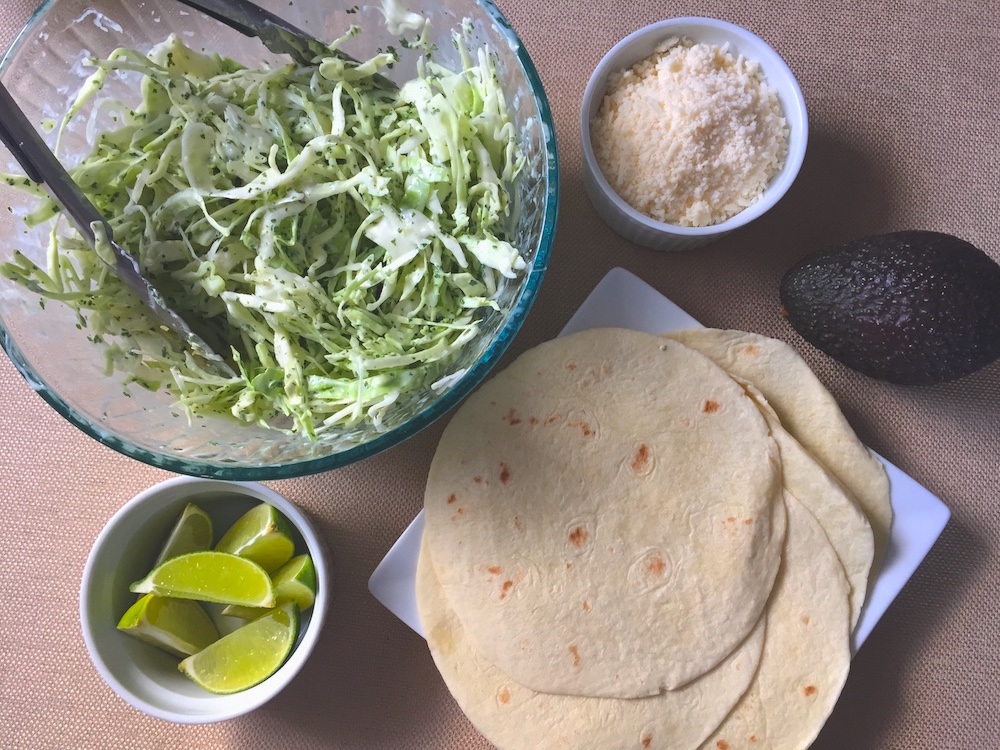 This recipe originally comes from Pinch of Yum, with some adaptations along the way. Though most of the ingredients are simple and straightforward, you might have trouble finding cotija cheese, depending on where you live. Most Mexican specialty stores will carry it, but even your supermarket will likely have a version of it. Any fresh, crumbly cheese that’s labeled “queso fresco” or something along those lines will work as well. It’s sometimes pre-grated, or will come in a loose block form that you’ll need to crumble yourself.

In addition, any type of cabbage will work for this recipe. I typically use regular green cabbage since it’s the cheapest and most widely available, but heads of red cabbage or the frilly Napa cabbage would work, too.

For the coleslaw sauce

Directions: In a large zip-top bag or medium bowl, toss peeled shrimp with chili powder, cumin, and any seasoning you have on hand. (I use a chipotle mixture, but pretty much any grill or meat seasoning will do.) Add desired amount of cayenne pepper, and toss until shrimp are evenly coated. Set aside, up to several hours if storing in the refrigerator.

To prepare the coleslaw sauce, put all of the ingredients except for the sour cream in a blender or food processor. Mix until well combined. Add the sour cream, and pulse until fully incorporated. Set aside.

Thinly slice raw cabbage into ribbons until you have 2-3 cups. Place in a medium bowl. Just before cooking the shrimp, add coleslaw sauce in ¼-cup increments, tossing with two forks or tongs with each addition. Add sauce to your desired consistency. It should take on the look and feel of a typical coleslaw where the cabbage is covered by the sauce, without becoming too saturated. (You will likely have some sauce left over.)

In a medium skillet, heat 1-2 tablespoons of your desired cooking oil, and add shrimp in an even single layer to the pan. Sauté for 5-8 minutes, flipping occasionally, until the shrimp are cooked through.

To serve the tacos, place slices or smashed avocado on the tortilla, followed by the slaw mixture and shrimp. Top with leftover sauce, cotija cheese, cilantro, and a spritz of lime juice, as desired. Serve immediately. 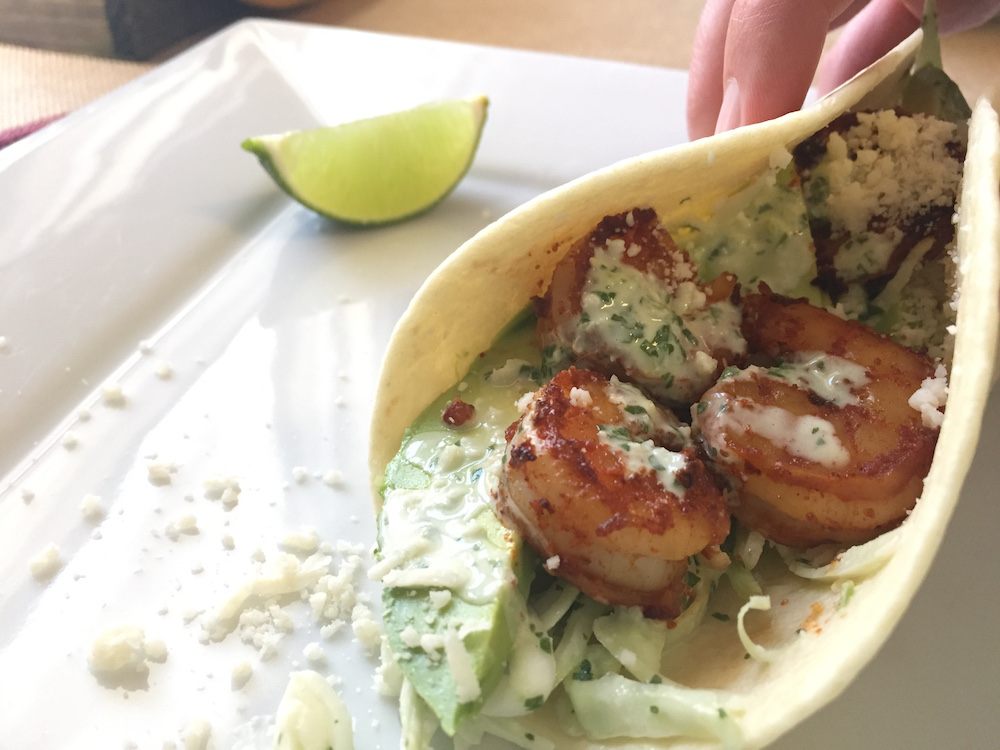 As you can probably tell, it only takes one time or so of making this recipe before you become a pro. It’s simple, but the beauty is that there are extra shortcuts you can take.

For instance, thawing your shrimp in the refrigerator overnight and coating them with the spices before you leave in the morning means you have zero protein prep at night. If you forgot to thaw them, most frozen bags of shrimp offer quick-thawing techniques, which typically include running cold water over the shrimp in a colander for 5 minutes. All you need to do is pat the shrimp dry, and violá, your shrimp are ready to be spiced and thrown in the pan. I think spicing them ahead of time gives them extra flavor, but the original recipe has you coat them with spices right before cooking them anyway. Po-tay-to, po-tah-to.

A quick word on the spice mixture: As long as you keep the chili seasoning and cumin for color and flavor, the rest is flexible. If your family complains about too much spice, lose the cayenne pepper altogether. I’ve used whatever seasoning flavor is in my pantry, which has ranged from chicken grill seasoning to the chipotle rub I mentioned before. Just make sure the seasoning mix has salt and pepper in it — or add a dash of each as well.

If you’re at the point where you just-can’t-even with dinner prep, lose the whole head of cabbage and purchase a bag of the pre-sliced coleslaw mix. One bag should be enough to serve four people (with about 5 shrimp per taco), and you won’t have to pull out your big chef’s knife. Score.

Last but not least, I’ve found that the coleslaw sauce can last in a sealed container in the refrigerator for up to 5 days. Make it the night before and toss with the cabbage just before serving, and you’ll have dinner on the table in no time at all.