5 Nutritious Recipes Using Olives for a Punch of Flavor

Healthy eating usually means greens galore, which can leave your meals feeling both sparse and bland. Save your taste buds from such a sad fate by working olives into your cooking. Usually considered just a pizza topping, these fruits are brimming with nutrients and pack a serious punch of flavor. These 5 recipes show you how to get started. 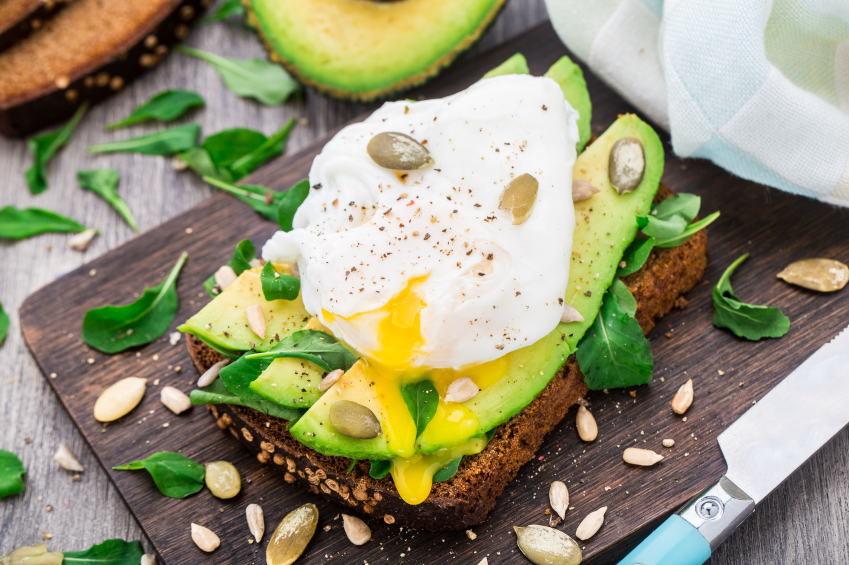 Most breakfast sandwiches include a combination of eggs, bacon, and cheese. This triple threat always tastes delicious, but it’s not the healthiest way to start your day. Instead of topping your breakfast with a mound of smoked pork, try olives with this Mediterranean-inspired sandwich from Chowhound. They add just as much flavor without requiring any additional cooking, which means this sandwich is pretty speedy.

As for the specifics, olives contain 65 calories per ounce compared to bacon’s 149 calories for the same amount, making them a great way to lighten up this breakfast classic. And even though they’re loaded with the salty taste most of us love, olives still contain less sodium per ounce than bacon.

Directions: Heat olive oil in a large skillet set over medium heat. Add eggs and begin to cook. Meanwhile toast bread under the broiler or with a toaster. Cook eggs to your desired doneness, spooning some of the oil over the tops of the whites to help them cook. Remove eggs to a plate.

Increase skillet heat to high and add red pepper flakes. Stir in kale and cook, tossing, until just wilted, about 1 to 2 minutes. Stir in olives.

Top each slice of toast with an equal amount of greens. Add an egg to each, then top with avocado, feta, and a sprinkle each of salt and pepper. Serve. 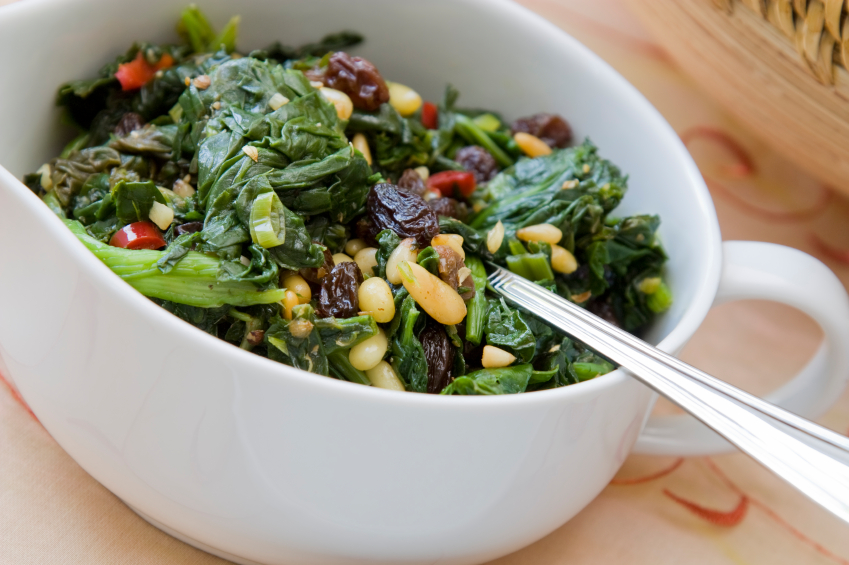 If you’ve been serving the same sautéed spinach with dinner night after night, you’ll love this chard side with olives and currants from Eating Well. The dried fruit and olives give this dish a sweet and savory flavor we absolutely love while the goat cheese adds a bit of creaminess and tang. Serve it with some simply cooked chicken or pork for an easy weeknight dinner.

If taste alone isn’t enough to make you want to cook this delicious side, consider what olives can do for your immune system. One study published in Food & Function found extracts found in table olives can inhibit disease-causing bacteria, which reduces your chances of falling ill. We bet you could do with less sick days in your life.

Directions: Heat oil in a Dutch oven or other heavy pot over medium heat. Add chard stems and season with salt and pepper. Cook, stirring often, until softened, 3 to 5 minutes. Stir in leaves and continue to cook, stirring constantly, until wilted, about 2 minutes. Add olives and currants. Top with goat cheese and cook just until chard is tender and goat cheese melts, about 2 minutes longer. Serve.

3. Chicken Tagine with Fennel and Olives 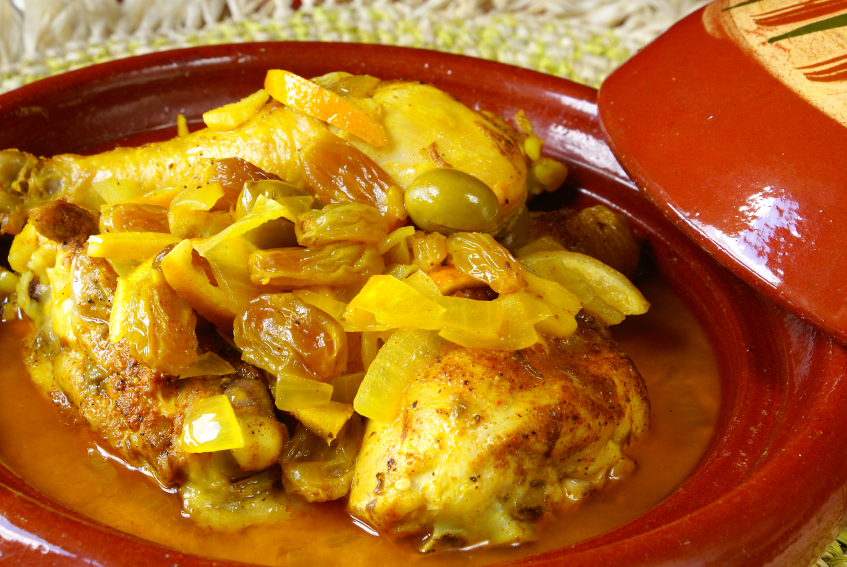 With tons of flavor from a combination of herbs, spices, fennel, and olives, this fragrant chicken tagine from Bon Appétit takes the struggle out of eating well. One of the smartest tricks is using boneless, skinless chicken thighs. They’re just slightly fattier than breast meat, but stay juicier and more flavorful. Feel free to use any one of your favorite green olives or go for a variety.

Mediterranean ingredients often get the green light for their heart-boosting benefits, but olives can do much more than help out your ticker. One 2015 study found women who consumed a type of extract found in olives experienced an improvement in bone mineral density after 12 months.

Directions: Mix cumin, paprika, salt, and cayenne in a small bowl to combine. Cut each chicken thigh crosswise into thirds, then toss with spice mixture.

Heat 1 tablespoon oil in a large skillet set over medium-high heat. Add chicken and cook until browned, about 2 minutes per side. Remove to a plate and set aside.

Add 1 tablespoon of oil and fennel to same skillet. Cook until golden in spots, about 5 minutes. Return chicken and any accumulated juices to skillet. Stir in broth and lemon juice. Bring to a simmer, scraping up any brown bits from the bottom using a wooden spoon. Cover, reduce heat to low, and simmer until chicken is cooked through, about 15 minutes. Add olives and simmer until just thickened, about 5 minutes. Stir in cilantro, season with salt and pepper, and serve. 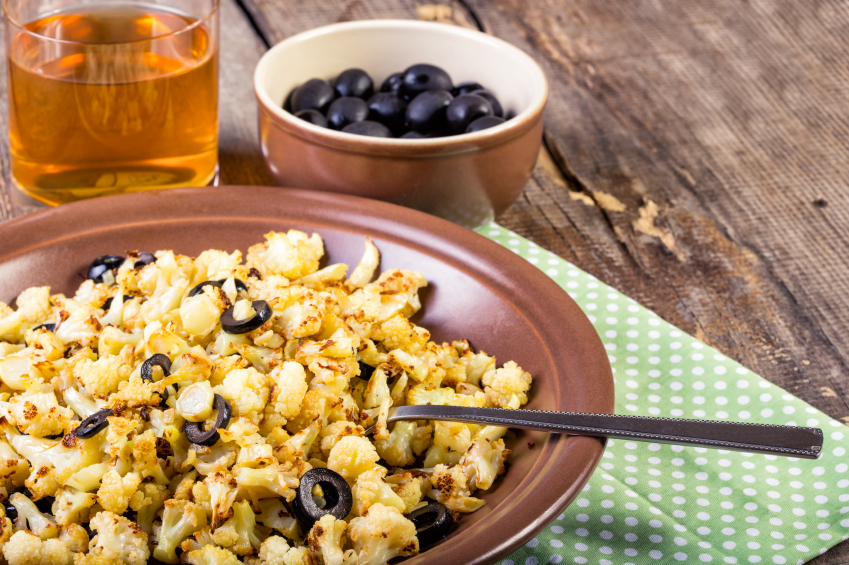 We all love a hot and bubbly gratin when the weather is a little chilly. The bad news is most of them are swimming with cream, cheese, butter, or even all three. The New York Times managed to capture all the comforting taste of the classic in a much healthier package with this olive and cauliflower version. This recipe has so much flavor, all you need is a light sprinkling of cheese to achieve the desired effect.

Many vegetables have been linked to anti-cancer benefits, and it turns out olives may help in the fight against the disease. Research published in Molecular & Cellular Oncology found a type of compound found in olives can kill cancer cells. These are just preliminary findings, but they’re still promising.

Directions: Bring a large pot of water to a boil and break up cauliflower into small florets. Salt water generously and cook cauliflower for 5 minutes. Transfer to a bowl filled with ice water and let cool completely. Drain well and let dry on a few layers of paper towels.

Preheat oven to 375 degrees Fahrenheit. Oil a 2-quart baking dish. Heat 1 tablespoon oil over medium heat in a large, heavy skillet. Add onion and cook, stirring, until tender, 3 minutes. Add garlic and a pinch of salt. Cook, stirring, for about 30 seconds, until garlic is fragrant. Remove from heat and stir in olives.

Place cauliflower in prepared baking dish and add onion mixture, remaining olive oil, parsley, and half of cheese. Season with salt and pepper and mix to combine. Spread mixture into an even layer in dish and sprinkle remaining cheese over top. Bake for 25 to 30 minutes, or until cheese is browned. Serve.

5. Fish with Tomatoes, Olives, and Capers 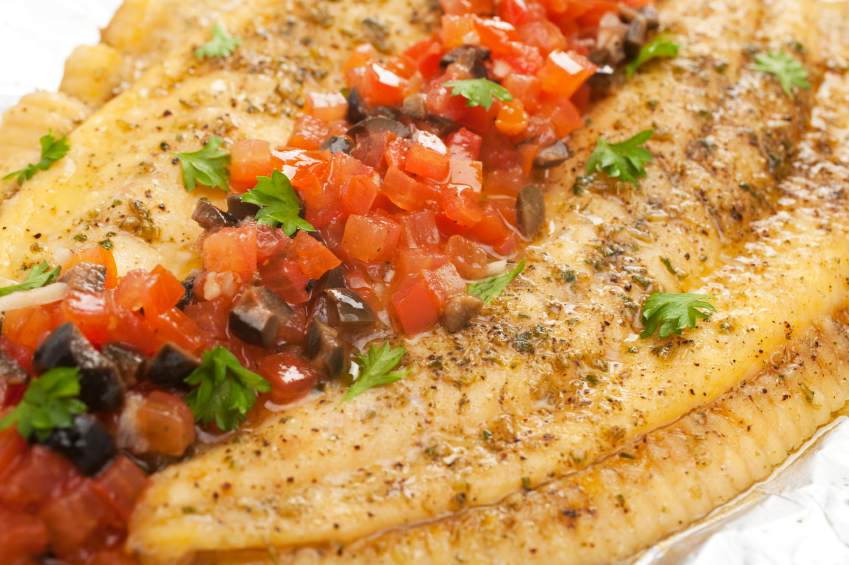 If you don’t typically cook a lot of fish, it can be difficult to figure out what to do with the protein other than grill or broil a fillet. Give your next seafood night a lot more excitement with Ellie Krieger’s fish topped with a tomato-olive sauce, featured on Food Network. Our favorite part about this dish? It’ll be on the table in 15 minutes.

We’ve all heard about the benefits of olive oil and the fruits themselves are equally as good. One recent study revealed the fats found in processed olives are just as high quality as those in extra-virgin olive oil. And because you’re combining both ingredients with fish, this dinner is a total winner.

Directions: Heat 2 teaspoons of oil in a large nonstick skillet over meidum-high heat. Add fish and cook until opaque in center, about 2½ minutes per side. Remove to a platter and tent with foil.

Heat remaining oil in same skillet. Add onion and cook, stirring, for 2 minutes. Add wine and cook until reduced by half, about 2 minutes. Stir in tomatoes, olives, capers, and crushed red pepper and cook for 3 minutes more. Stir in spinach and cook until just wilted, about 3 minutes. Season with salt and pepper. Spoon sauce over fish and serve.