The U.S. government has updated its Dietary Guidelines for Americans, and the new rules about what we should and shouldn’t eat are getting mixed reviews. Nutrition experts have criticized them for being vague and confusing. Cancer researchers are upset that people aren’t being told to cut back on red and processed meat. The sugar industry is up in arms about suggestions that people curb their sweet tooth.

What’s the average diner to do? One is to realize that the revised guidelines aren’t all that different than what we’ve heard before, though there are a few notable changes. Most significant is the recommendation that Americans to cut back on sugar, which should make up no more than 10% of your daily calories.

Dietary experts also want people to vary the types of protein they eat, particularly by eating more seafood, nuts, and seeds. (Initial suggestions that people cut back on their red meat consumption were removed from the final guidelines because of pressure from the meat industry, NPR reported.) People should also aim to get less than 10% of their daily calories from saturated fat (a recommendation that’s unchanged from previous years), eat more fruits and vegetables, and limit sodium to no more than 2,300 milligrams a day.

The recommendations may not be earth-shattering, but many people are going to have to change their diet if they want to follow them. Men who love to chow down on fast food and red meat are in particular need of a change. The average man in his 20s, 30s, and 40s is eating more than double the suggested amount of sodium, much of it from packaged and processed foods, according to the guidelines. Many guys are also eating too much meat and eggs and not enough fruits and veggies, the report concluded. But everyone needs to focus on eating healthier foods.

“Most Americans would benefit from shifting food choices both within and across food groups and from current food choices to nutrient-dense choices,” the guidelines note.

Ready to make some changes to the way you eat to better follow the new guidelines? We’ve put together this list of five recipes that fit with the government’s suggestions about how we should eat. 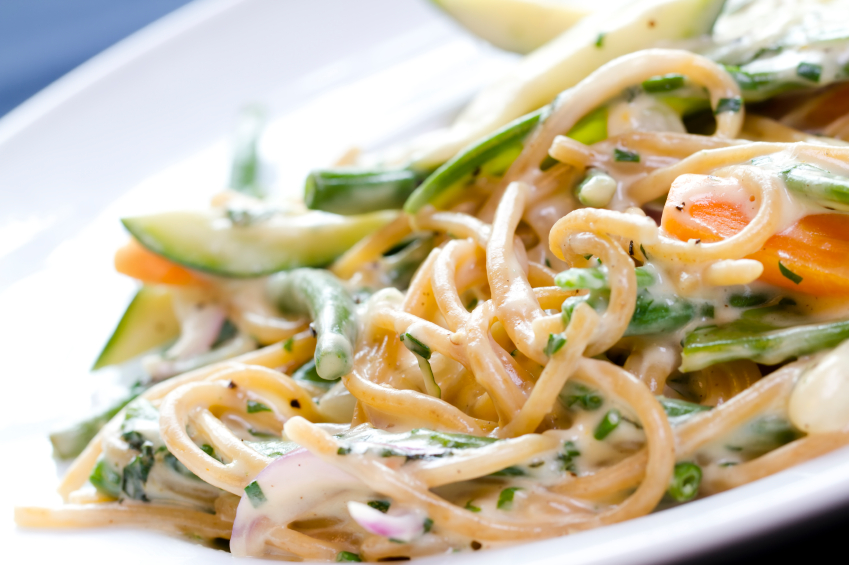 Your mom was right: You need to eat your veggies. The new guidelines urge Americans “to increase the vegetable content of mixed dishes while decreasing the amounts of other food components that are often overconsumed, such as refined grains or meats high in saturated fat and/or sodium.”

This recipe for pasta primavera from the Food Network hits those goals. For one, it’s chock full of healthy vegetables like peppers, asparagus, and carrots. Plus, it calls for whole-wheat pasta, a better-for-you alternative to white pastas made with refined grains. 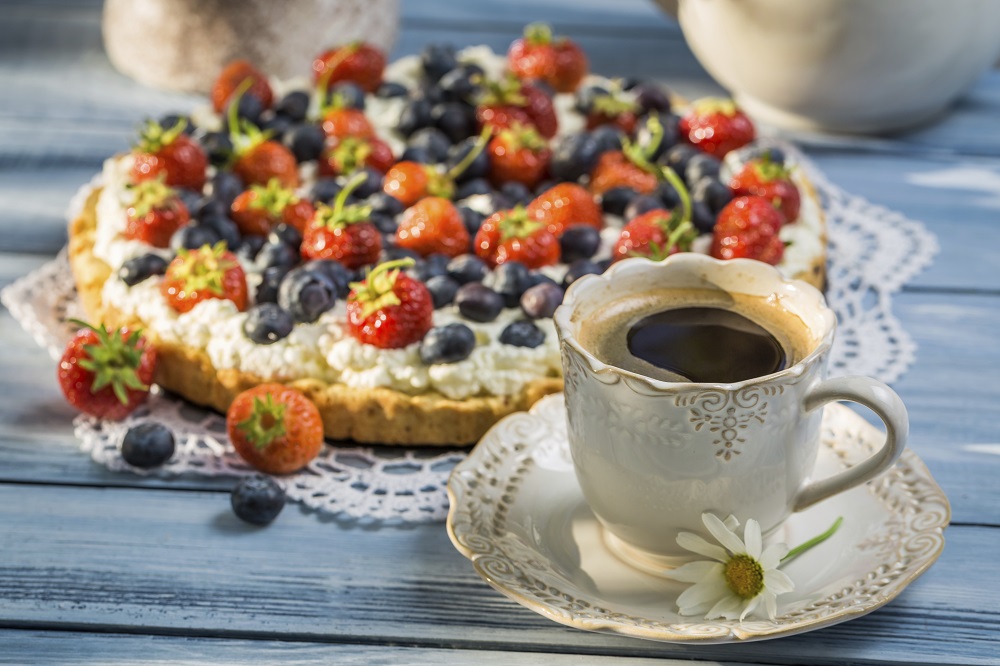 The crackdown on sugar in the new dietary guidelines might have you thinking you’ll have to forego dessert forever. Not so. Dessert is fine, but you should think about replacing cakes and cookies with fruit-based treats. The change helps in two ways: Not only are you cutting back on refined sugar, but you’re also eating more fruit, another thing the government’s nutrition experts say we should be doing more of.

This no-bake tart from the Minimalist Baker is free of refined sugar and topped with colorful fresh fruit like blueberries and kiwi. The filling is made with tofu sweetened with maple syrup, so you can sneak a bit more plant-based protein into your diet. Finally, a crust made of refined flour is swapped out for one made of dates and walnuts.

Directions: Pat the tofu dry and place on a clean towel. Cover with another towel, then place a plate on top. Place a few cans or other heavy object on the plate and let the tofu drain for at least 15 minutes and up to 1 hour.

Meanwhile, add the walnuts to a food processor and pulse until a semi-fine meal forms. With the processor still running, add the dates one at a time. Continue to mix until a dough forms. (You want it to hold together when you squeeze it with your fingers.)

Line a pie or tart pan with parchment paper. (You can also make individual desserts using several 4¾-inch tart pans.) Press crust into the pan until you have an even layer. Transfer pan to freezer to chill.

Place the drained tofu, lemon juice, vanilla, and maple syrup in a blender. Blend until the mixture is creamy and smooth. Taste and adjust flavor as desired.

Remove pie pan from freezer. Spoon the lemon-tofu filling into the crust. Place in the refrigerator to chill for 2 to 4 hours. Top with sliced fruit or berries of your choice, then serve. 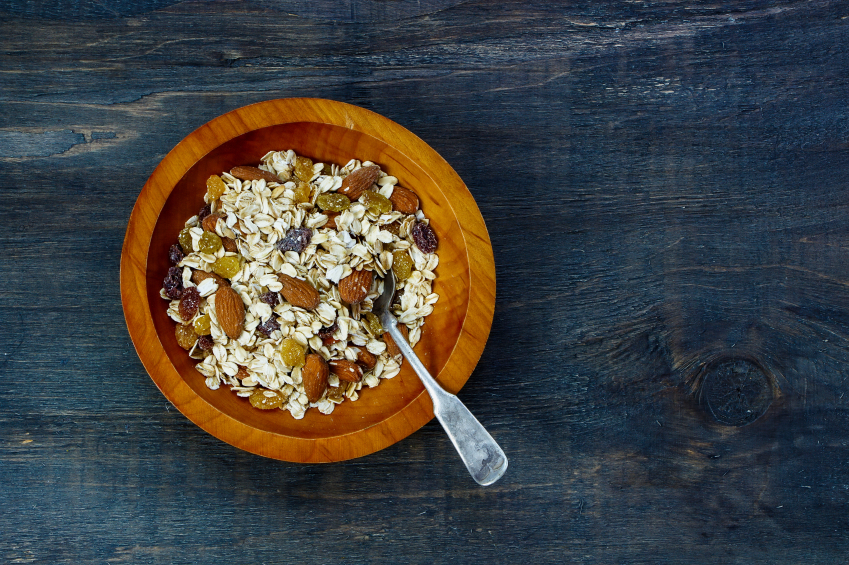 By now the suggestion that Americans eat more whole grains and fewer refined grains is old news. Many of us aren’t getting the message, though. “Average intakes of whole grains are far below recommended levels across all age-sex groups, and average intakes of refined grains are well above recommended limits for most age-sex groups,” the guidelines note.

Breakfast is a good time to load up on whole grains, and your options aren’t limited to oatmeal and granola. Instead, try this fruit and oat muesli from Epicurious, which contains tasty oats plus almonds, a variety of fresh fruit, and milk and yogurt (the guidelines also suggest eating more low-fat dairy). The recipe serves 6, so you’ll want to scale it down if you’re not cooking for a crowd.

Directions: Mix first oats, milk, yogurt, and vanilla extract in a large bowl. Let stand 5 minutes to soften oats. Whisk orange juice and honey in medium bowl. Stir in grated apples and almonds, then 3 cups chopped fruit. Stir fruit mixture into oat mixture. Cover; chill. Spoon into bowls. (Note: Muesli can be made up to 8 hours ahead of time.) 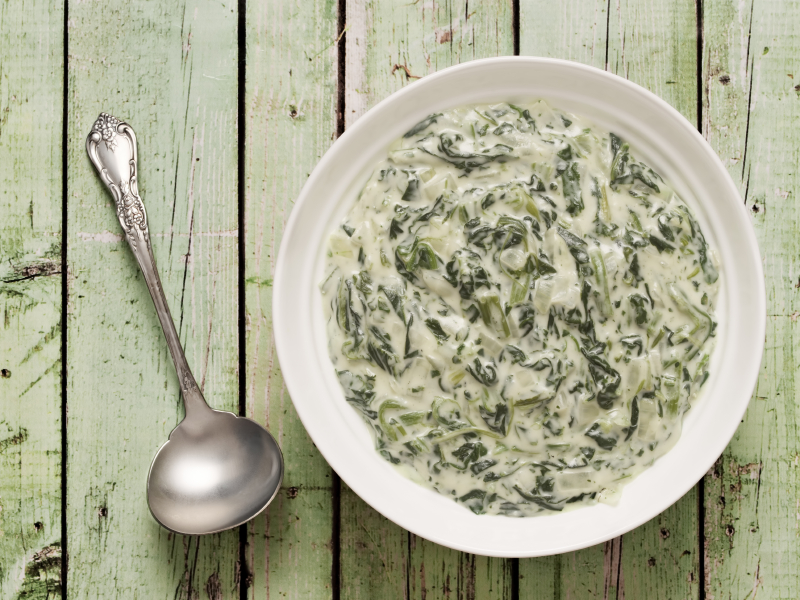 Americans need to eat more dairy foods, specifically lower-fat or fat-free options. Yogurt is a particularly good way to eat more dairy, with the guidelines suggesting that people choose it for a snack or use it as an ingredient in spreads.

Try adding a little more dairy to your day by making this super-simple spinach-garlic yogurt from Bon Appétit. It’s perfect as a dip, spread on whole-wheat toast, or as a side with some grilled fish or chicken. Plus, this tangy concoction is also loaded with spinach, so you can get more of those much-needed vegetables into your diet.

Directions: Heat 1 tablespoon oil in a large skillet over high heat. Add half of spinach and cook, tossing often, until just wilted; transfer to a colander and let cool. Repeat with 1 tablespoon oil and remaining spinach. Squeeze spinach well to remove excess water, then coarsely chop.

Mix chopped spinach, garlic, yogurt, cilantro, and remaining 1 tablespoon oil in a medium bowl; season with salt. Cover and chill at least 1 hour before serving. Dip can be made up to a 1 day ahead; the garlic flavor will get more intense the longer it sits.

5. Halibut with Lentils and Mustard Sauce 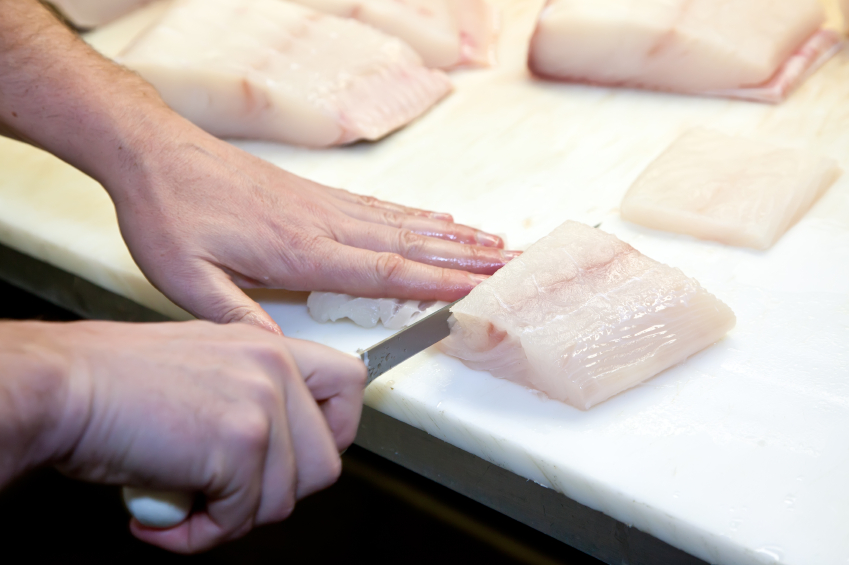 All Americans should be eating at least 8 ounces of seafood per week, per the new guidelines. For guys, increasing consumption of seafood goes hand-in-hand with cutting back on protein that’s higher in saturated fat, like red meat.

If the call to eat more seafood makes you groan, try looking beyond the obvious choices. Shrimp, tuna, and salmon are the three most-consumed types of seafood in the U.S., but if you’re bored with those choices or don’t like their taste, you still have options, like this simple recipe for pan-fried halibut with lentils from Real Simple.

Directions: Heat 1 tablespoon of the oil in a large saucepan over medium heat. Add the onion and cook, stirring occasionally, until soft, 5 to 6 minutes.

Add the garlic and sweet potato and cook, stirring, for 1 minute.

Add the broth and lentils and simmer, covered, until the lentils are tender, 20 to 25 minutes. Season with ½ teaspoon each salt and pepper.

Meanwhile, heat the remaining oil in a skillet over medium-high heat. Season the fish with ¼ teaspoon each salt and pepper. Cook until opaque throughout, 3 to 5 minutes per side.

In a bowl, whisk together the mustard, wine, and tarragon. Divide the lentil mixture and fish among plates and drizzle with the sauce.