5 States That Have the Worst Airline Ticket Prices 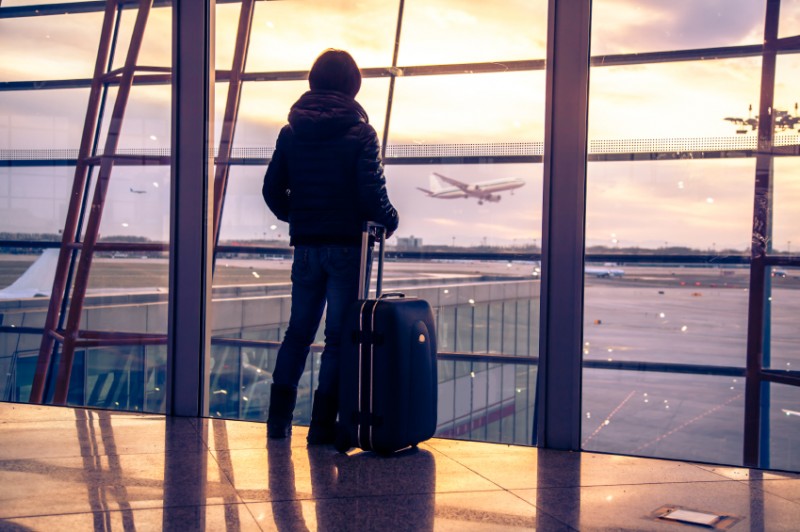 There’s no question that when you’re traveling, airfare is often the highest-ticket item on your bill. Unfortunately, paying out big money for the convenience of flying across several states or countries doesn’t always mean that you’ll arrive stress free, with no issues. In fact, taking a flight has become synonymous with delays, cancellations, lost baggage, and other snafus that quickly make you feel like you’re in a remake of Planes, Trains and Automobiles — minus the railroad part.

With carriers in the United States transporting more passengers every year, it’s a good idea to know if you’re getting a good deal, and if you should expect delays in your trip. In 2014, U.S. airlines transported more than 761 million passengers on domestic and international flights, more than any year prior. As of August 2015, that figure was already up to 534 million people for the year. The average domestic flight is $392. Aside from some slight dips near periods of recession, the ticket price has steadily climbed.

Stratos Jet Charters Inc. compiled extensive data from the Bureau of Transportation Statistics to see which states have the lowest and highest airfares, and where you’re most likely to get stranded because of a delay or cancellation. The company included data from all domestic and international flights from 314 U.S. airports from January to August of 2015, and found some interesting information about making sure the money you pay for flights will be worth it.

For example, the day you fly can impact whether you’ll get to keep your flight itinerary or if you’ll need to be rebooked after a cancellation. Mondays are the most popular day for airlines to cancel flights — far more than any other day of the week. More than 17,400 flights were cancelled on Mondays since the beginning of the year, with the next highest on Tuesdays with 12,373 flights cancelled. Chicago O’Hare International Airport has the largest number of cancelled flights, in August totaling 6,585 flights. But because O’Hare handles more flights than almost any other airport (except for Atlanta’s Hartsfield-Jackson airport), other airports have a higher percentage rate of cancellation. O’Hare’s cancellation rate is about 3.16%, while LaGuardia’s cancellation rate is 5.48% despite handling less than half of the traffic that some of the larger airports do.

In other words, if you’d rather pay your money and avoid further frustration, try to avoid airports like LaGuardia and O’Hare when possible to avoid extending your travel time. 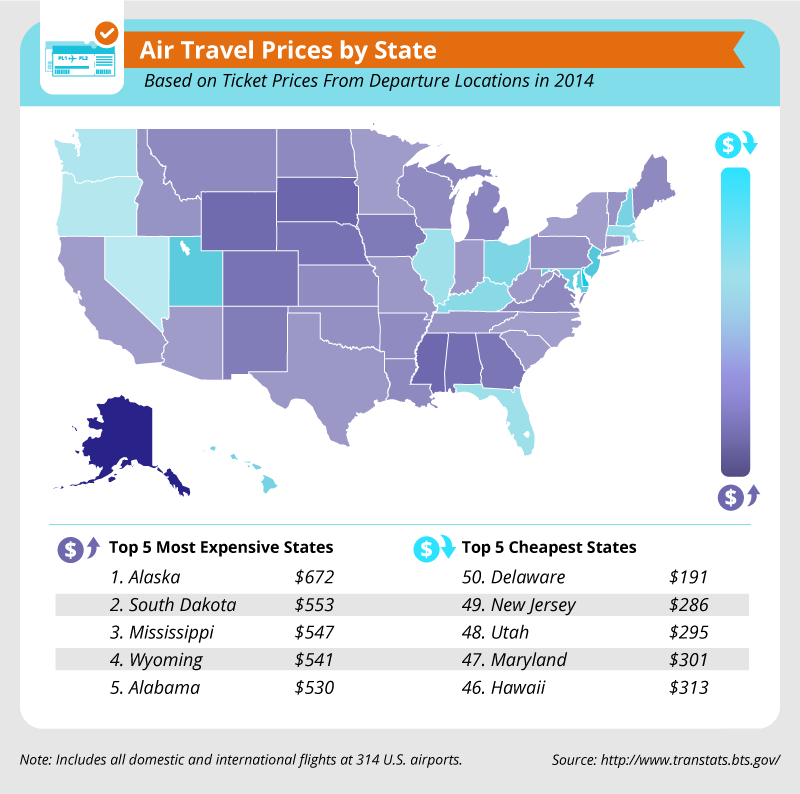 When it comes to paying for tickets, some destinations and departure states are much cheaper than others — and some results are surprising. The graphic above shows the best and worst states to fly from in terms of cost. Alaska is by far the most expensive, with average flights costing $672. South Dakota and Mississippi are also high, both with average ticket costs around $550. Average ticket sales for departures from Wyoming and Alabama are also high, at $541 and $530, respectively.

Delaware is home to the cheapest departures in the country, with average tickets at about $191. Departures from New Jersey and Utah are both under $300, and Maryland’s average departure ticket costs $301. As perhaps a surprise to some, Hawaii comes in fifth with an average ticket cost of $313.

Though you’ll get a deal in many eastern states, you’ll likely pay for it with more delays. Flying from Delaware might be the best for your wallet, but not your sanity. Flights from the state ranked the worst in terms of delayed departures, with only 66% of flights leaving on time since the beginning of 2015. New Jersey, also known for more affordable flights, only has a 72% punctuality rate, the second worst in the country.

If you want the best of both worlds, flying from Hawaii and Utah are your best options. Both have reasonable flight costs compared to other states, and they rank first and second in terms of on-time departures. Hawaii’s flights leave as scheduled 89% of the time, and Utah’s flights are on time 86% of the time — the highest rates in the country. 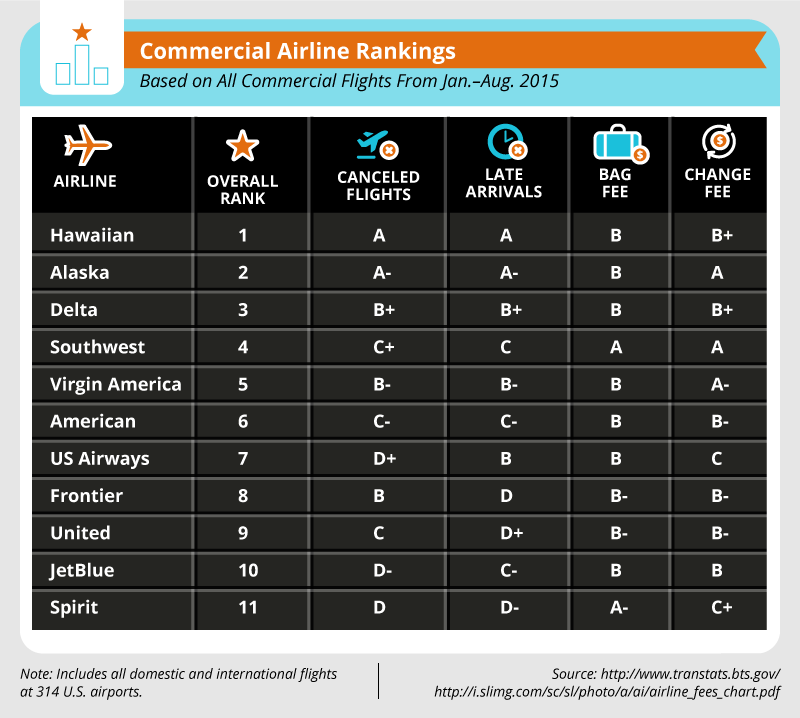 As part of its analysis, Stratos also took into account data from individual airlines. Spirit and other budget airlines are known for saving you some money (if you don’t check bags or elect for any other “extras”), but you’ll likely make up for it with less than stellar service. Spirit is known for cancelled flights and late arrivals, and ranks worst in the 11 major airlines Stratos studied. Hawaiian Airlines came in first, followed by Alaska and Delta.

For more information about the rankings, check out the full report here.