Cooking for others is intimidating for anyone, especially kitchen novices. But because there’s no way to avoid the occasional potluck or afternoon hangout where your friends need something to nibble, it’s worth learning a simple appetizer or two. In fact, some of the fastest, easiest recipes are also the tastiest. These bourbon-glazed cocktail franks prove it, so it’s time to get cooking.

While this is definitely over-simplifying, recipes often break down into ones driven by technique and ones driven by ingredients. The former usually involve time-intensive processes and lots of components while the latter tend to lean on ingredients that already have a lot of flavor, which significantly speeds things up. The speedy route is a lot more approachable for beginners, so we went for assertive ingredients: bourbon, maple syrup, Dijon mustard, and Worcestershire sauce. The cocktail franks themselves also have a lot of flavor, so there’s no way this appetizer can turn out bland.

Grab your biggest, heaviest skillet for this recipe, then add all of your liquid ingredients. And please, please use real maple syrup. The imitation stuff won’t taste the same and we’re not entirely sure how it will turn out texture-wise. It’s a small investment that yields delicious results, so don’ try to cut corners. Once everything’s in the pan, give it a good stir to fully incorporate the mustard. Now you get to play with fire.

In all seriousness, you need to take precautions any time a recipe involves flambéing. Any high-proof spirit like bourbon is, well, high-proof. These bottles usually contain about 40% alcohol, so they’re extremely flammable. For this reason, you never want to pour directly from the bottle into a pan over the heat. It’s best to measure out what you need, remove the pan from the flame, add the alcohol, then transfer it back to the burner. You might lose a few seconds, but this method is the best way to ensure you don’t have an accident. We removed the temptation to shortcut safety by starting with the alcohol in a cold pan before even moving it to the stove.

As for the ignition, professional chefs often tilt the pan right over an open flame. This isn’t the best idea because it can catch you off guard. It might also make a mess of your stove, so opt for a stick lighter or a long kitchen match instead. Check out this great demonstration from America’s Test Kitchen to see the entire method.

If you’re not a drinker or just don’t feel like using booze, you can substitute something in place of the bourbon. Apple cider or chicken stock would both work. If you go with stock, you may need to add a bit more syrup to get the right level of sweetness.

Once your flambéd (or virgin) sauce has reduced, toss in your cocktail franks. The glaze will continue to thicken as the meat heats through, and the entire process takes just minutes. These franks are good as is, but a sprinkle of sliced scallions adds a nice hit of onion flavor and gives you major presentation points. If you’re so inclined, a bourbon-based beverage would pair nicely with this simple appetizer. 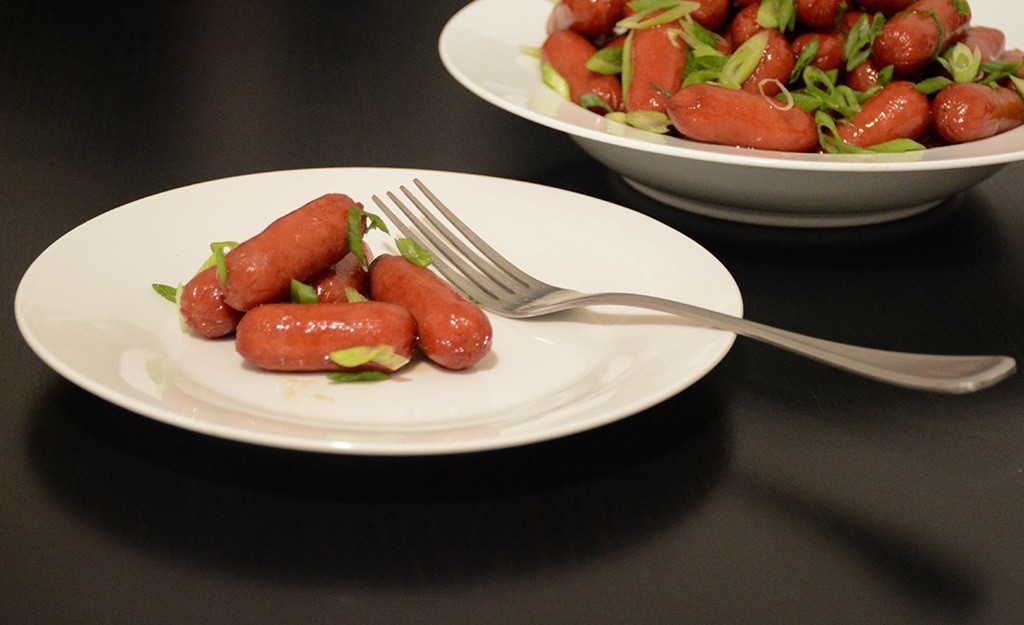 Don’t go crazy with an expensive bottle of bourbon for this dish, but use something you’d still feel comfortable drinking. You can even find smaller bottles of decent brands at most liquor stores. This recipe makes enough for 6 to 8.

Directions: Combine syrup, bourbon, Worcestershire, and mustard in a large, heavy skillet. Stir to combine. Set skillet over medium-high heat. Carefully ignite mixture using a stick lighter or long kitchen match. Allow flames to die down as mixture simmers and cooks until it begins to thicken, about 2 minutes.

Add cocktail franks and continue to cook, stirring occasionally, until franks are heated through and coated with glaze, about 5 to 6 minutes. Serve garnished with scallions.