Every city offers its own certain claims to fame. Savannah, Ga., has historic charm. Miami has wonderful beaches and some awesome cheeseburgers. New York has a little bit of everything, including world-class restaurants. But not every city can be among the best football cities in America.

We’ll start off by showing you which NFL cities are scraping the bottom of the barrel. We’ll play spoiler for a second: Even though the Cleveland Browns hardly have a prayer when they take the field, you won’t see the city among the worst.

It’s hard to believe that a big city in a football-crazy state like Florida makes the worst list, but here we are. Since winning the championship in the 2002 season, success has been fleeting for the Tampa Bay Buccaneers. Having some of the ugliest uniforms in the league surely doesn’t help.

Next: Expensive tickets and poor results are not a good combination.

It might be one of the best spots in America for tailgating, but Chicago is one of the worst NFL cities out there. The lack of success (no winning seasons from 2013 to 2017), the small stadium, and having some of the most expensive tickets in football firmly put Chicago in the ‘worst’ category.

Next: Not checking enough boxes to be among the best.

They had a couple factors that hurt their score. | Doug Pensinger/Getty Images

Despite winning a championship not too long ago, Denver is still one of the worst football towns out there. It just doesn’t score high enough in the WalletHub metrics. The Broncos have just three Hall of Fame players and zero Hall of Fame coaches. Also, the revolving door in the coach’s office over the last few seasons hurts the score.

Next: A big city in a football hotspot shows up.

Houston is a fairly new team. | Thomas B. Shea/Getty Images

Houston is big and getting bigger, but that’s not enough to keep it off the worst list. Yes, the Houston Texans are a relatively new team (2002 was their first season), and despite that, they’ve had some success on the field. Yet the modest success isn’t enough to move the needle and prevent Houston from landing near the bottom of the WalletHub rankings.

Next: The worst NFL city of all probably won’t surprise you.

They have quite a few disappointed fans. | Robert Reiners/Getty Images

The Jaguars bucked the odds and came within a game of making it to Super Bowl 52. That blip of success hardly makes up for years of ineptitude on the field. Poor results, disinterested fans, and one of the worst stadiums in pro football help make Jacksonville the No. 1 worst city for NFL fans.

Next: The worst of the worst.

Being among the worst in NFL cities isn’t a good look for the places we just visited. But as we’re about to see, some parts of the country would kill to swap places with them. We’re about to visit the absolute worst football cities in America. 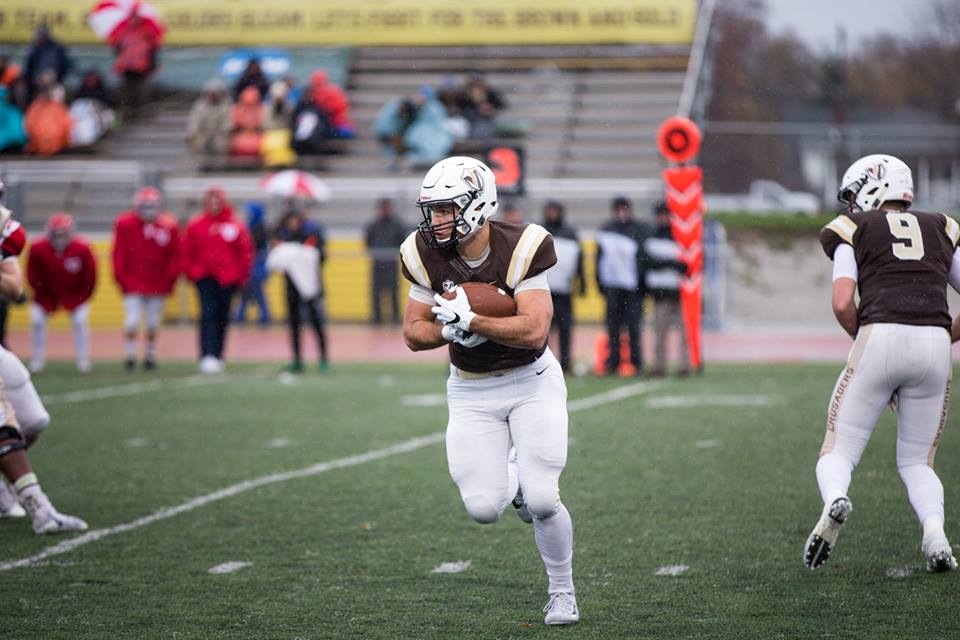 If you’re looking for big-time competitive football in Valparaiso, it’s college football or bust. Valparaiso University has a team, but it competes in the lower-level NCAA Football Championship Subdivision. It takes effort for Valparaiso football fans to head to Indianapolis and Chicago NFL games. Plus, as we saw a minute ago, Chicago is a pretty lousy NFL town. Put it all together and Valparaiso comes up short.

Next: A city that understands Valparaiso’s pain. 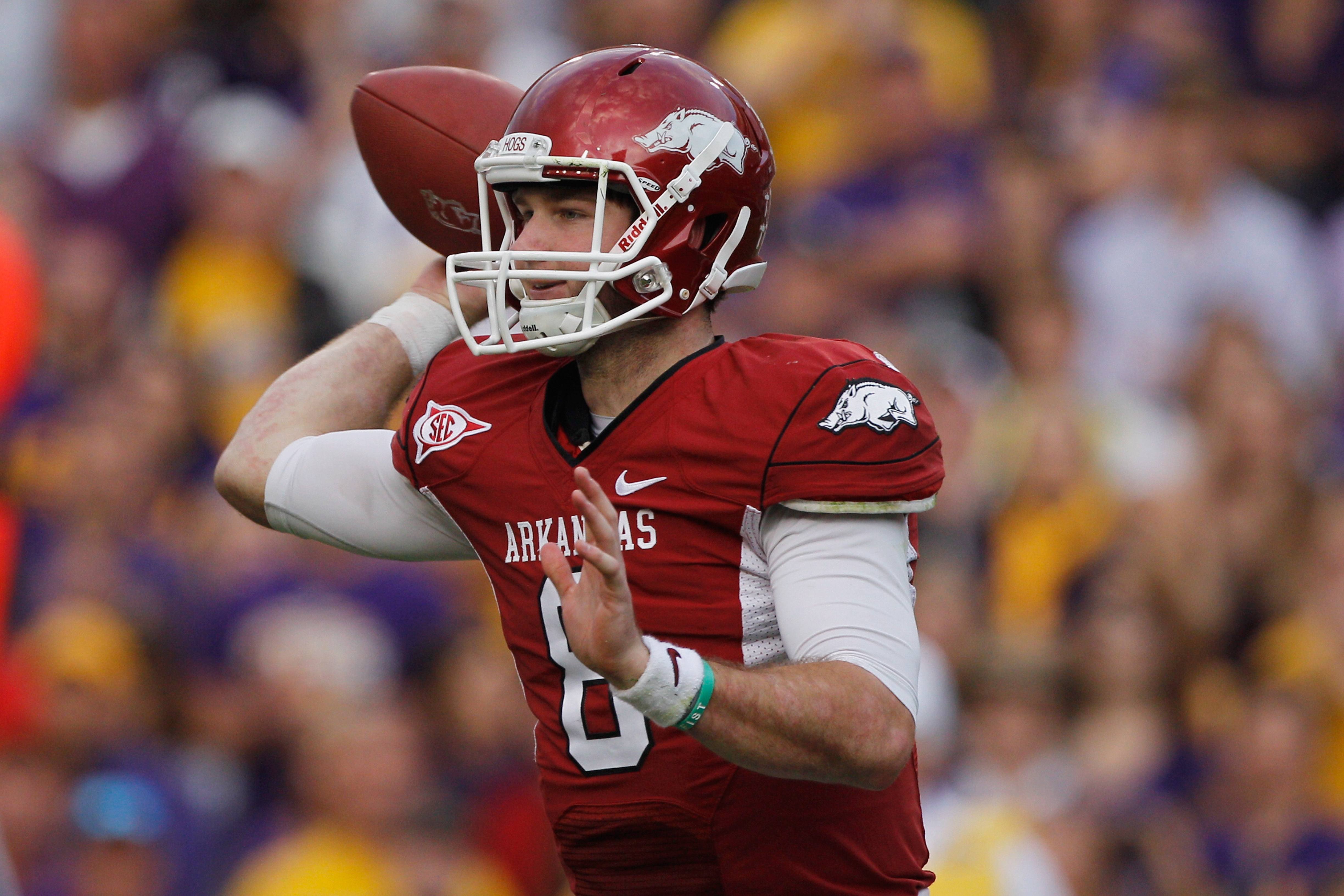 There aren’t a whole lot of options. | Chris Graythen/Getty Images

Like we just saw in Valparaiso, Ind., the options for football fans in Pine Bluff are very limited. The team at the University of Arkansas-Pine Bluff plays at the NCAA-FCS level. Big-time college football or NFL action isn’t easy to get to, which makes Pine Bluff one of the worst football cities out there.

Next: It’s not shocking to see a basketball hotbed among the worst for football.

Sure, Charlotte and the NFL’s Carolina Panthers aren’t far away (about 22 miles), but that’s not enough to save Davidson from the worst list. After all, North Carolina is more of basketball state. It has two of the best college basketball schools in the country. If the folks in Davidson want to check out a big-time college football game, they have to put in some effort and drive halfway across the state.

Next: There’s only one football choice in this corner of the country. 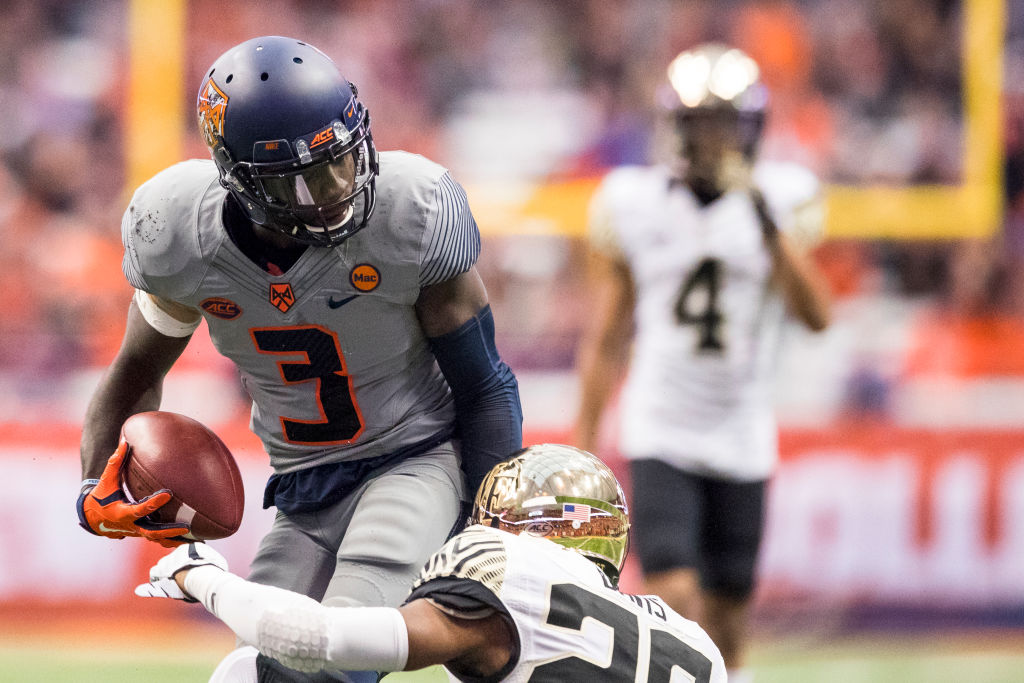 Syracuse might as well be a football desert. Pro football in Buffalo or New York City is hundreds of miles away. Syracuse University has a major college football team, but with just four postseason appearances since 2001, it’s debatable just how vital the team is.

Next: Let’s visit the worst city for football. 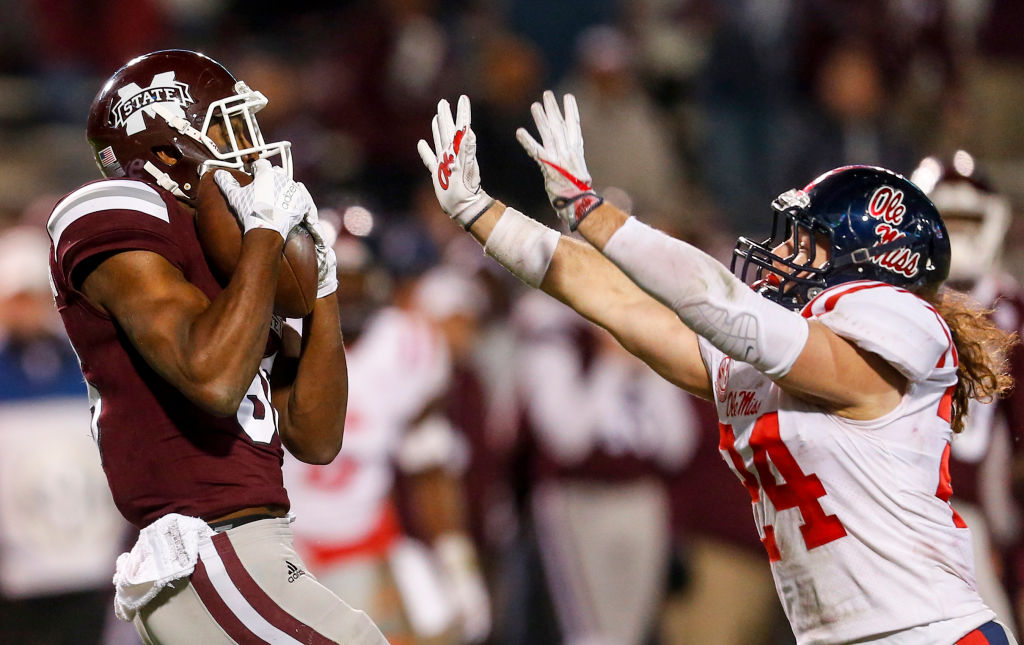 Even the college teams are far. | Butch Dill/Getty Images

It’s almost all cons and no pros for football fans in Jackson. Certainly no pro football. The closest NFL cities — New Orleans, Atlanta, and Nashville — are 188, 381, and 415 miles away, respectively. There isn’t any big-time college football in town. Heck, even the state’s two big-time college football programs aren’t easy to get to. Starkville, Miss., is 126 miles down the road and Oxford, Miss., is 161 miles away. The complete lack of access to major competitive football in Jackson is what makes it the worst football town in the United States.

Next: Let’s turn around and look at the 10 best football towns.

We’ve seen the worst NFL cities and the worst cities overall. Now it’s time to tour the best football cities in America. All of these cities have NFL teams, and some boast big-time college football teams to boot. Ready for kickoff? Here we go. 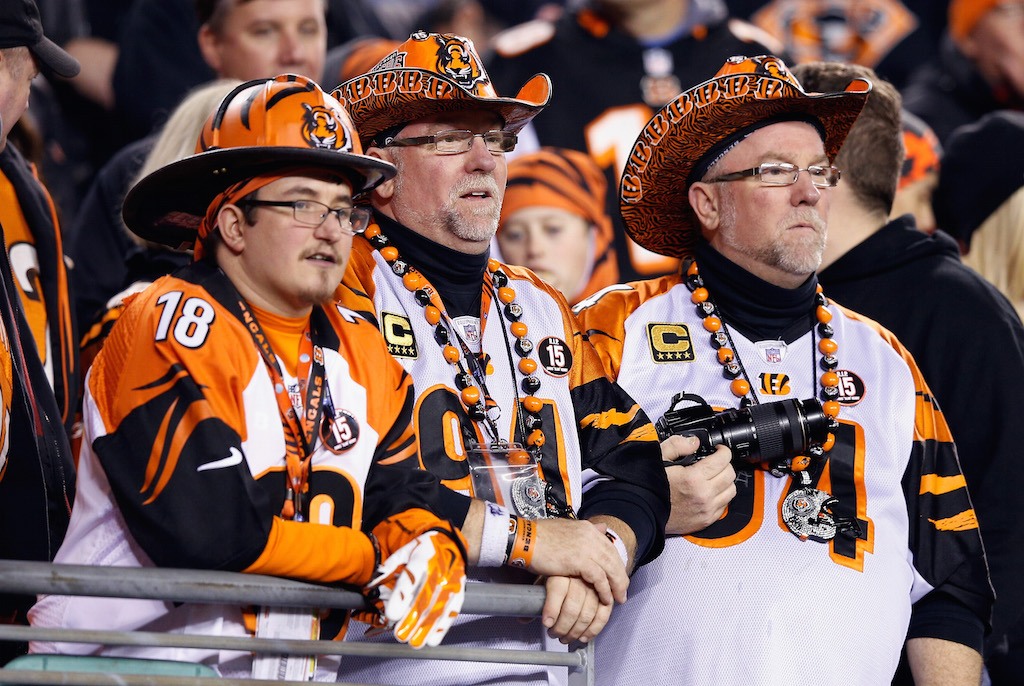 The city that had one of the worst NFL head coaches of all time pushes its way into the top 10. The Cincinnati Bengals have never won a Super Bowl, but their fans keep showing up. And for football fans who don’t dig the NFL, the University of Cincinnati plays Division I college football within city limits.

Next: Still top 10, but probably not for long.

No word yet if the fans will follow to Las Vegas. | Ezra Shaw/Getty Images

Everything points to Oakland not making this list. Their stadium should be demolished instead of hosting the Raiders. Plus, the team is moving to Las Vegas, so the Raiders are basically a lame duck franchise. But the fans keep showing up to support their team. Thanks to multiple Super Bowl wins and some recent success, Oakland is No. 7 in WalletHub’s pro football rankings. The lack of a college team dropped Oakland two spots in the overall rankings, but it’s still in the top 10 — for now.

Next: Riding high and going higher in the future.

The Eagles’ win in Super Bowl 52 brought Philadelphia its first NFL championship. The city and its famous celebrities are riding high from that win, and Philadelphia will only move higher in future rankings since WalletHub factors in championships. If the college game is more your thing, Temple University and the University of Pennsylvania both play within the city limits.

Next: A suburb gets in on the act.

The Fiesta Bowl bumps Glendale up on the list. | Christian Petersen/Getty Images

At first glance, this Phoenix suburb shouldn’t be one of the best NFL cities. But when you stop and consider that Glendale is where the Arizona Cardinals play, it makes more sense. Not only that, but the city hosts college football’s Fiesta Bowl every year. Plus, the Fiesta Bowl and Cardinals games take place in a bucket-list-worthy stadium. When you consider that, it’s easy to see why Glendale makes the cut.

Next: Four teams push this town toward to the top 5.

There are plenty of options at the very least. | Tom Pennington/Getty Images

In 2016, Los Angeles went from zero to two NFL teams in the blink of an eye. The San Diego Chargers and St. Louis Rams both moving to town hardly registered with fans — at least if you go off the number of Twitter followers for each team. But the two NFL teams plus UCLA and USC’s programs provide plenty of options for football fans. That’s how L.A. lands this far up the list.

Next: Two reasons this metropolis makes it this high.

There’s not one but two NFL teams. | Rich Schultz/Getty Images

The WalletHub rankings factor college football into the overall scores. Even though New York barely registers on the college football radar, it still makes the list for two reasons: The New York Giants and New York Jets. Between them, the two NFL franchises have five championships, numerous Hall of Fame players, and some legendary coaches. The only negative is they play home games in New Jersey. Otherwise, their history of success makes New York one of the best football cities out there.

Despite this year’s loss, fans have a lot to be happy about. | Tom Pennington/Getty Images

Boston College and Boston University play football within the city limits, and Harvard plays just across the Charles River in Cambridge. But college football isn’t why Boston makes the list. It has a little something to do with the New England Patriots and their five Super Bowl titles. It doesn’t matter if the dynasty is failing. Those five championships and the legions of fans who live and die with the Patriots will keep Boston high on the list of top football towns for a long time to come.

Next: You can’t mention NFL football without mentioning this team. 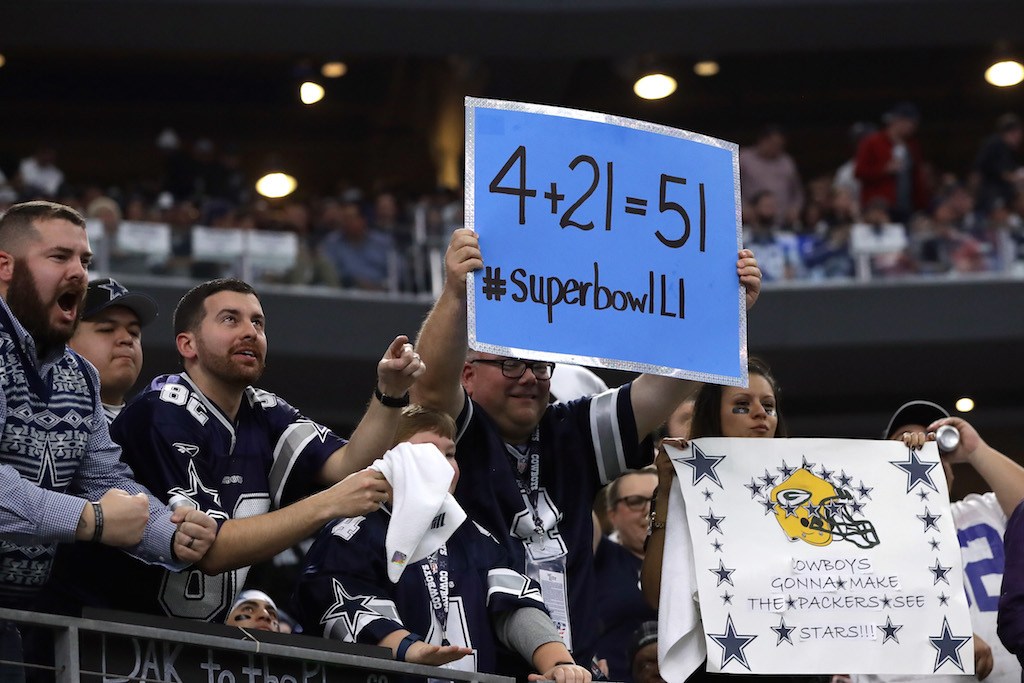 The legacy alone makes for a great city for fans. | Ronald Martinez/Getty Images

Like Boston, Dallas has five Super Bowl titles thanks to the Cowboys. They’re called America’s Team for a reason, and the Super Bowls have something to do with it. They’ve been better at crushing fans’ dreams recently, but their legacy of success makes Dallas a great football city.

Next: The city with the most Super Bowl wins. 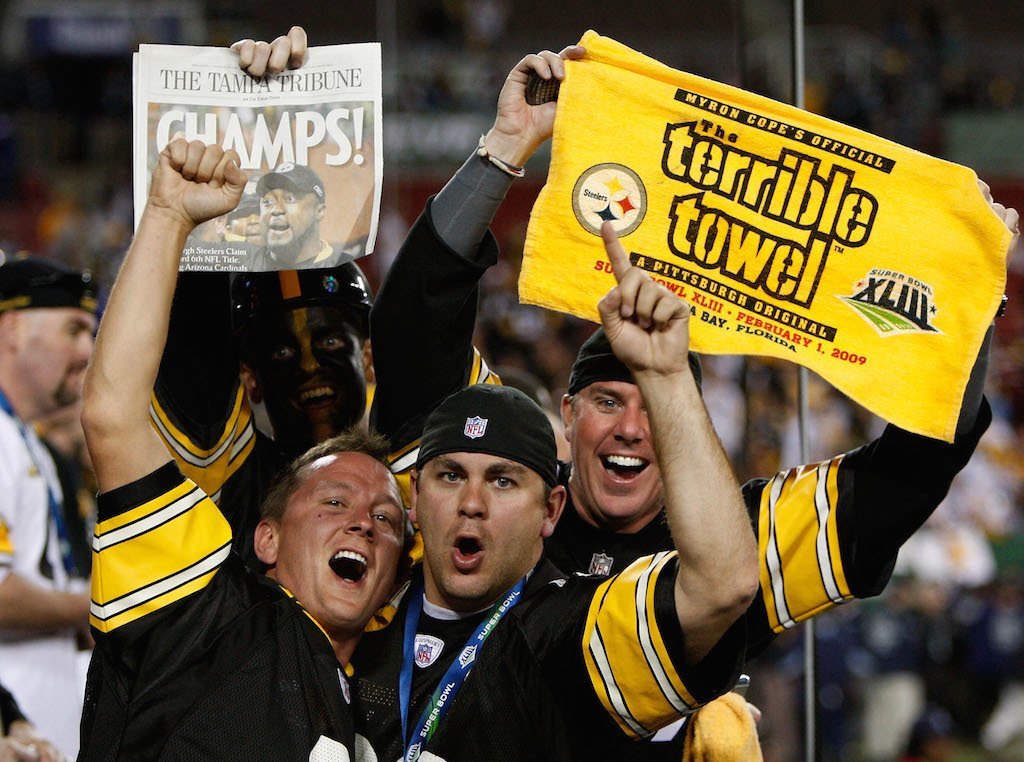 They have the most titles of any franchise. | Kevin C. Cox/Getty Images

The six Super Bowl titles for the Steelers are the most for any NFL franchise. A list of the team’s greatest players includes a fair share of the NFL’s best all-time players. Throw in the devoted fans, and you get the No. 2 football city in America.

Next: The best city for football is…

The Green Bay Packers are the No. 1 reason people in northern Wisconsin leave the house in autumn and early winter. OK, that might be stretching the truth, but not by much. At least the team gives Packers fans something worth watching. Their top quarterbacks are among the best to ever play the game. The team has four Super Bowl titles, and it’s always a contender to win another one. The fact the Packers have accomplished all that in a city of barely over 100,000 people makes it the best football city in America.