These Are the Most Quintessentially American Dog Breeds

Many of the most popular dog breeds in America hail from other parts of the world. A recent U.S. president chose Portuguese water dogs to live at the White House. Even America’s very favorite dog breed, the Labrador retriever, hails from Canada. And another popular breed, the German shepherd, comes to us via Europe. But there are also some quintessentially American dog breeds that originated right here in the United States.

Below, check out the all-American dog breeds that you may not have even known got their start in the United States.

These beautiful dogs are full of energy and, surprisingly enough, are among the most commonly banned breeds in the U.S. | iStock.com/DronG

The Alaskan malamute is a native Alaskan breed. The AKC reports that the breed counts among its cousins the Samoyed from Russia, the Siberian husky, and the Eskimo dogs of Greenland and Labrador. The Alaskan malamute gets its name from the native Inuit tribe called the Mahlemuts. (This tribe settled in the Kotzebue Sound in northwestern Alaska.) These powerful dogs descended from the domesticated wolf-dogs who accompanied Paleolithic hunters across the land bridges of the Bering Strait. Experts think that they migrated to the North American continent about 4,000 years ago.

Next: Despite its name, this dog breed doesn’t actually have any Eskimo heritage.

As you might guess from its name, the American Eskimo dog also numbers among the American dog breeds recognized by the AKC. The group has German ancestors. In fact, despite the word “Eskimo” in its name, the breed doesn’t seem to have any traceable connection to Eskimo culture. The breed likely descended from European spitzes. That includes the white German spitz, the white Keeshound, the white Pomeranian, and the Volpino Italiano, also known as the white Italian spitz.

Next: George Washington owned some of these beautiful dogs.

The American foxhound is one of the rarest dog breeds. | iStock.com/pro16productions

Another of America’s native dog breeds, the American foxhound descends from a line of dogs that came to the American colonies from England in 1650. A man named Robert Brooke transported them, and eventually “established a breeding and working pack of black-and-tan foxhounds in America,” as the AKC explains. These beautiful hounds actually formed the basis of several other strains of American hounds, too. George Washington himself owned some of these beautiful foxhounds. Washington even established some of the best early examples of the breed.

Next: This is the first hairless dog breed to originate in the United States.

Many people don’t know the story of the American hairless terrier. | lenanet/iStock/Getty Images

Most people know about hairless cats. But many haven’t heard of the American hairless terrier. The AKC reports that American hairless terriers are the first hairless breed to originate in the United States. Interestingly enough, they had the same lineage as the rat terrier until the 1970s. In 1972, a rare mutation occurred in a litter of rat terriers. So a completely hairless puppy was born in a litter of otherwise “normal” rat terriers. People love these dogs because of their playful personalities. Plus, even allergy sufferers can often own one without major issues.

Next: This dog breed may trace its heritage to animals brought to the Americas by Spanish conquistadors.

One of the lesser-known American dog breeds, the American leopard hound numbers among the oldest tree dog breeds in America, according to the AKC. We don’t know the breed’s exact origin. However, as the AKC explains, “Those who have researched the history of the breed maintain that dogs brought to the New World by Spanish conquistadors played a role in the evolution of the American Leopard Hound.”

Next: This dog breed looks like the original bulldog.

The American Staffordshire terrier, one of the many breeds that people popularly refer to as “pit bulls,” may be one of the most popular American dog breeds. The AKC reports that the breed that, today, we call the American Staffordshire terrier looks a lot like the bulldog you would have found in England up until the early part of the 19th century. But American breeders created this dog because they wanted a heavier, sturdier dog than the English breed.

Next: This American breed has many European ancestors. 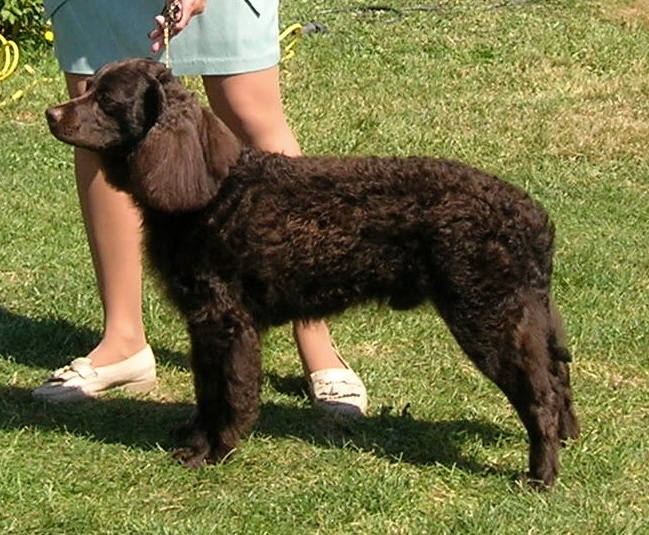 The American water spaniel’s origin is a bit of a mystery. | Awsguy1/Wikimedia Commons

Next: This dog can hunt very large animals.

Surprisingly enough, the black and tan coonhound is one of the least expensive dog breeds. | Avondell iStock/Getty Images

The black and tan coonhound has gained a reputation as an easygoing hunting dog. Experts think the breed descended from the St. Hubert hound and the Talbot hound. (The Talbot hound dates back to at least 11th century England!) The AKC reports that despite the label “coonhound,” the black and tan coonhound “is equally proficient in hunting deer, mountain lion, bear, and possibly other big game.” But if you don’t want to hunt, the breed also makes an entertaining pet.

Next: This dog is a perennial favorite among American dog breeds.

As you might guess from his name, the Boston terrier numbers among the truly American dog breeds recognized by the AKC. the organization reports, “Their many charms have made Boston Terriers a true American favorite for more than a hundred years.” The breed resulted from a cross between an English bulldog and a white English terrier. Initially, breed enthusiasts called the Boston terrier the “American bull terrier.” But they met with opposition from bulldog and bull terrier owners, so they changed the name in 1891.

Next: This entire breed traces its origin to two puppies rescued from a shipwreck.

Another of our favorite American dog breeds? The Chesapeake Bay retriever. The breed originated in the United States. Yet the breed counts among its ancestors two Newfoundland puppies, named Sailor and Canton, who were rescued from an English ship that wrecked off the coast of Maryland. As the AKC explains, “The two dogs, who turned out to be wonderful retrievers, were presented to the gentlemen who helped the shipwrecked, and many of the nondescript dogs used for retrieving in the area were bred to them.”

Next: A polar explorer developed this powerful breed. 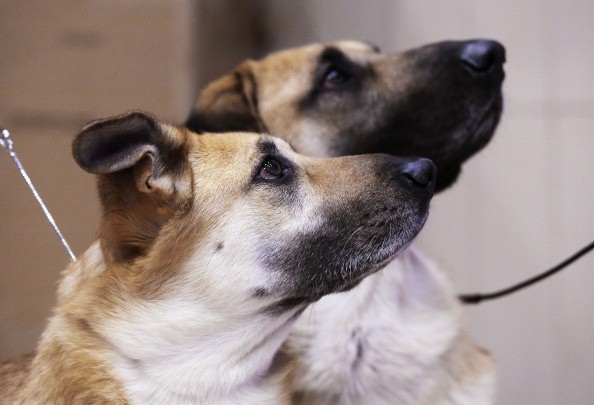 The breed was developed in the early 1900s on a farm in New Hampshire. | John Moore/Getty Images

The Chinook counts as another all-American dog breed. The AKC reports that polar explorer Arthur Treadwell Walden developed the breed during the early 1900s on his farm in the Wanalancet, New Hampshire. Interestingly enough, Walden’s farm was located along the same road — the Chinook Trail — where Milton and Eva Seeley helped develop the AKC Siberian and Malamute breeds. Walden bred a mastiff-type dog with the Greenland husky and the German and Belgian shepherds to create an American sled dog.

Next: This American dog breed originated as a mountain dog. 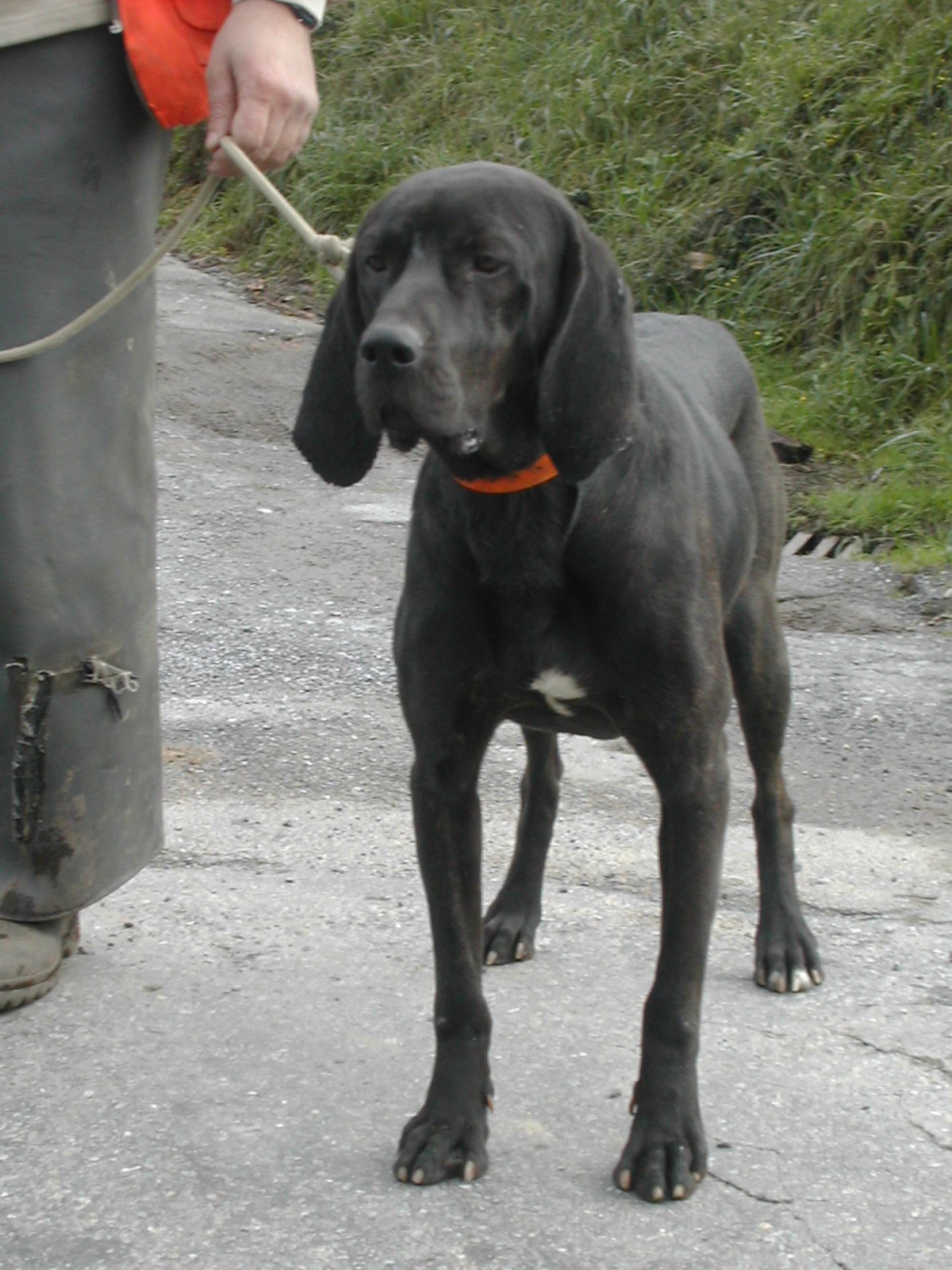 Even though it originated in the United States, the Plott hound got its name from a German family. | DTabCam/Wikimedia Commons

The AKC reports that the Plott hound derives its name from a German family who immigrated to America. The breed was created in the United States, but descends from the Hanoverian Schweisshund (bloodhound). German gamekeepers actually still love the Hanoverian, which itself was developed by crossing an ancient trailing hound like the St. Hubert with a lighter and faster hound. Plotts originated as a mountain breed, and originally hunted animals like bears and wild boars.

Next: Theodore Roosevelt owned one of these dogs.

Next on the list of American dog breeds? The rat terrier, which the AKC characterizes as an American breed that originated from a mix of crosses by early immigrants. Those immigrants bred fox terriers with other European terriers common in the 19th century, including the Old English white terrier, the Manchester terrier, the bull terrier, and later crossed with beagles, smooth fox terriers, toy fox terriers, whippets, and Italian greyhounds. Presidents have chosen many different dog breeds to live in the White House, but Theodore Roosevelt owned a rat terrier during his time in office.

Next: This breed traces its origins to dogs imported before the Civil War.

The redbone coonhound traces its origin to dogs imported before the Civil War. | Spencer Platt/Getty Images

The AKC reports that the redbone coonhound has an all-American origin story. Scottish immigrants brought red foxhounds with them to America in the late 1700s. Red Irish foxhounds also got imported before the Civil War. By the late 18th century, raccoon hunters began breeding “for hotter-nosed, faster dogs that were swifter at locating and faster at treeing raccoons.” So the redbone coonhound was born right here in the United States.

Next: This American dog breed counts as both a toy and a terrier.

One of our favorite American dog breeds, the toy fox terrier, came to be when American fanciers crossed small smooth fox terriers with various toy breeds. (Those toy breeds included min pins, Italian greyhounds, Chihuahuas, and Manchester terriers.) The AKC considers the toy fox terrier both a toy and a terrier, and notes that “both have influenced his personality and character.”

Read more: This Is the Most Commonly Banned Dog Breed in the U.S.