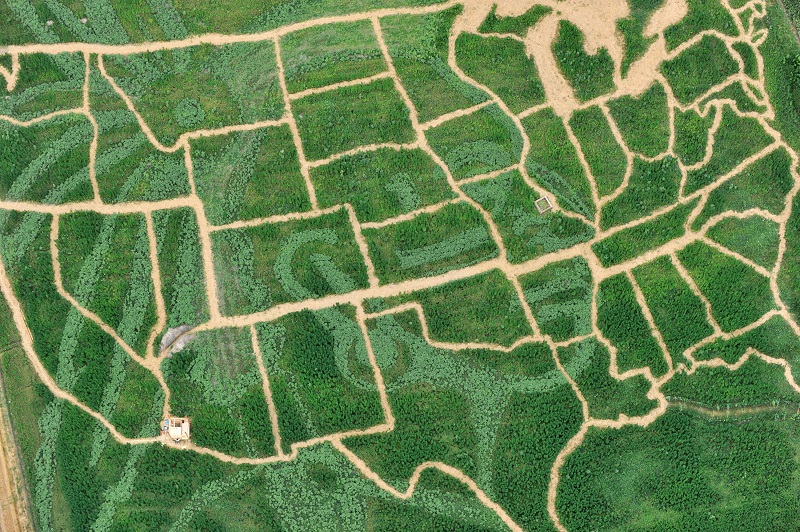 America is enamored with marijuana. The still federally-illegal substance, which has been given voter-approval by four states, is quickly gaining support from more-conservative audiences, and is even bound to find its way into the 2016 presidential election as Ohio, an important swing state, is set to test the waters this Fall.

The benefits of legal cannabis have been undeniable — thousands of jobs have been created, millions in revenue for entrepreneurs, tax revenue, and crime has even decreased as a result. So far, the experiment looks to be paying off in select areas of the country. And voters in other states are paying close attention.

A new study, published by Drugabuse.com, dug through petition data from We The People. Using the data, collected from all over the country beginning on We The People’s launch in September of 2011, Drugabuse.com crafted a series of maps that show where the initial groundswell of legalization support started, and where it is heading. The most obvious takeaways are that the west coast were the initial trailblazers in the legalization movement — something we’ve seen manifest in Washington, Oregon, and Alaska all having voted for marijuana legalization — and that support is spreading east, even as you read this.

Overall, this is the map from all data collected between 2011 and this year: 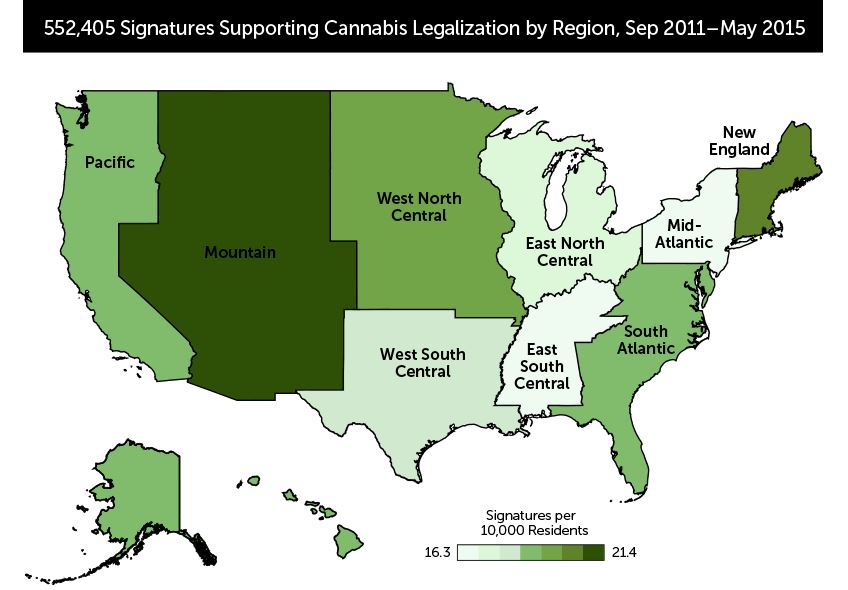 If you’re wondering why the west coast isn’t as green as the rest of the country, it’s because there was a drop in signatures in the middle of the data set. Because three west coast states legalized marijuana during that time. But what also catches the eye is the ‘mountain’ zone, and New England are all far more supportive than the central swaths of the country — though that looks to be changing when you take into account the most recent data sets.

For example, check out the following maps that sum up petition signatures with each passing year: 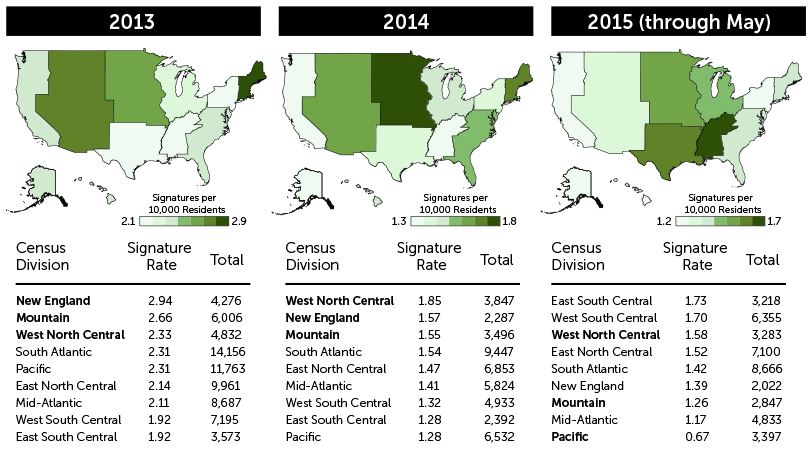 If there’s one clear indication to be seen in these maps, it’s that in just a couple of years, support for legalization has shifted south, and east. Typically, the midwest and south are far more conservative areas than the west and the northeast, but it seems the economic benefits — and distinct lack of ‘end of the world’– type scenarios playing out in weed-friendly states is catching some attention.

Though there really aren’t any southern states that appear to be headed for legalization in the immediate future, we did mention that Ohio looks primed to give it a good shot this Fall, even if the proposed law is rife with controversy.

And here again, how things have changed over the past four years:

The shift is underway, now it’s just a matter of seeing as to whether groups in these regions and states can mount effective policy pushes to get legalization measures on the ballot. We’ve speculated as to what states are likely next in line to legalize, with Maine, Massachusetts, and California headlining the list. But again, Ohio has thrown everyone a curveball, and there’s really no telling as to what other states might try to push something onto the ballot in short order.

Either way, it’s doubtful we’ll see a southern state attempt to rock the proverbial boat, especially since the federal government under Barack Obama has yet to really decide one way or another about reclassifying cannabis as something other than a Schedule 1 substance. If or until that happens, marijuana legalization is probably going to continue to spread state-by-state, with California (and its massive population and economy) being a huge domino set to fall.

We’ll see what happens in the next couple of years, but in the meantime, studies and maps like those from drugabuse.com are allowing us to get a visual representation of how attitudes toward cannabis are changing. In a very short amount of time, a rather wacky experiment taken on by Washington and Colorado has clearly piqued public interest, and the whole country — not just the coasts — are seeing the benefits.