If your family has a great American road trip planned this summer, have we got some stops for you. The United States has a wealth of the weird and the wonderful, from museums to natural formations. Add some of these hot spots to your vacation itinerary and don’t forget the camera.

Fans of the supernatural shouldn’t miss this one (page 12) and art-lovers just have to swing by this Southern favorite (page 15).

1. Craters of the Moon National Monument 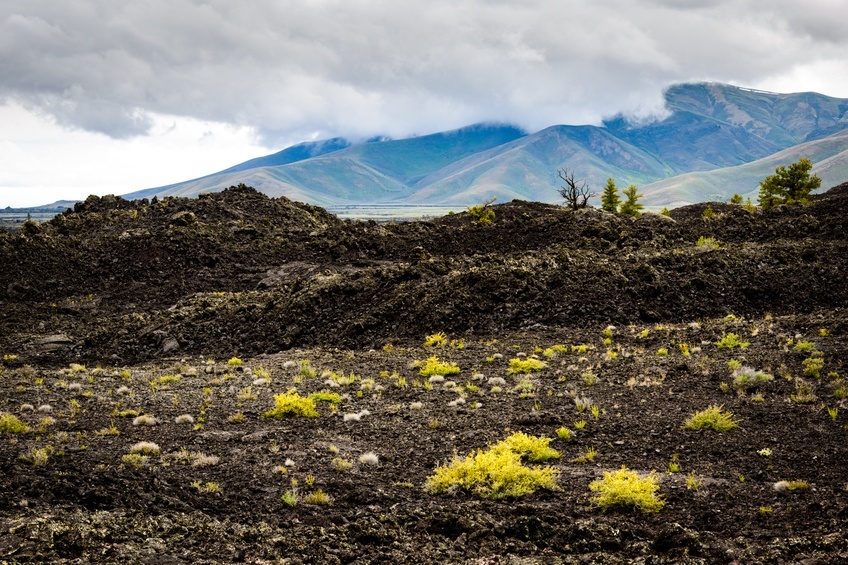 Craters of the Moon National Monument and Preserve | iStock/Getty Imagse

You’ll feel like you landed on the real moon at this Idaho national monument. The rugged landscape, about the size of Rhode Island, makes for some pretty surreal vacation pictures. Thousands of years-old lava has also created underground “lava tubes” that just beg for exploration. But make sure you bring a water bottle — this site has zero.

Next: This museum will make you want to clean out your hairbrush after your vacation. 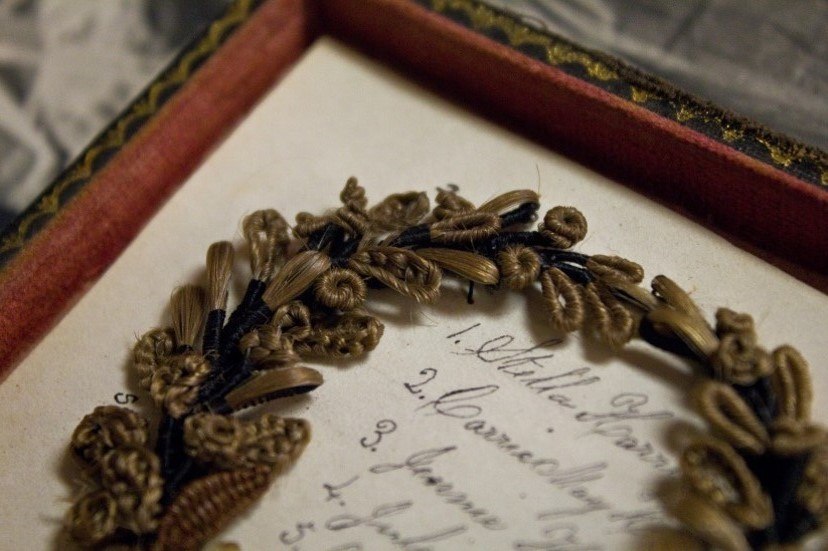 Independence, Missouri houses the only hair museum in the world. Leila’s Hair Museum features more than 600 different wreaths and more than 2,000 pieces of jewelry made from human hair, mostly worn by men and women during the Victorian age. You can even see hair from celebrities like Michael Jackson and Marilyn Monroe.

Next: Bring your sunglasses to the following shiny vacation site. 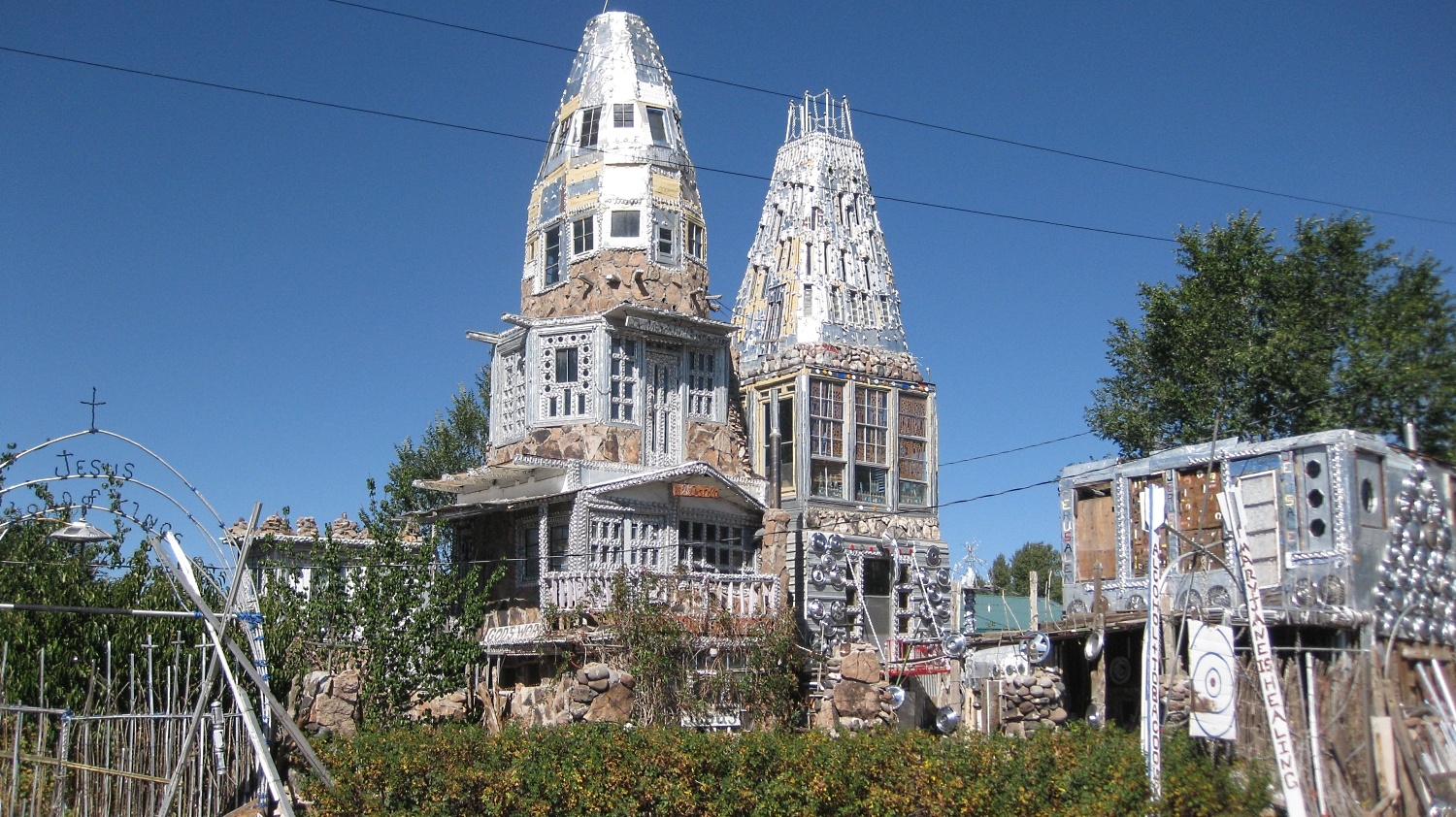 Donald “Cano” Espinoza, a Native American Vietnam War veteran, constructed Cano’s Castle in Antonito, Colorado. And you might say he has eccentric taste in architecture. The castle features a four-story house and several other buildings, all made out of beer cans and metal castaways. Joanna Gaines would probably not approve.

Next: Have a spiritual experience at this site. 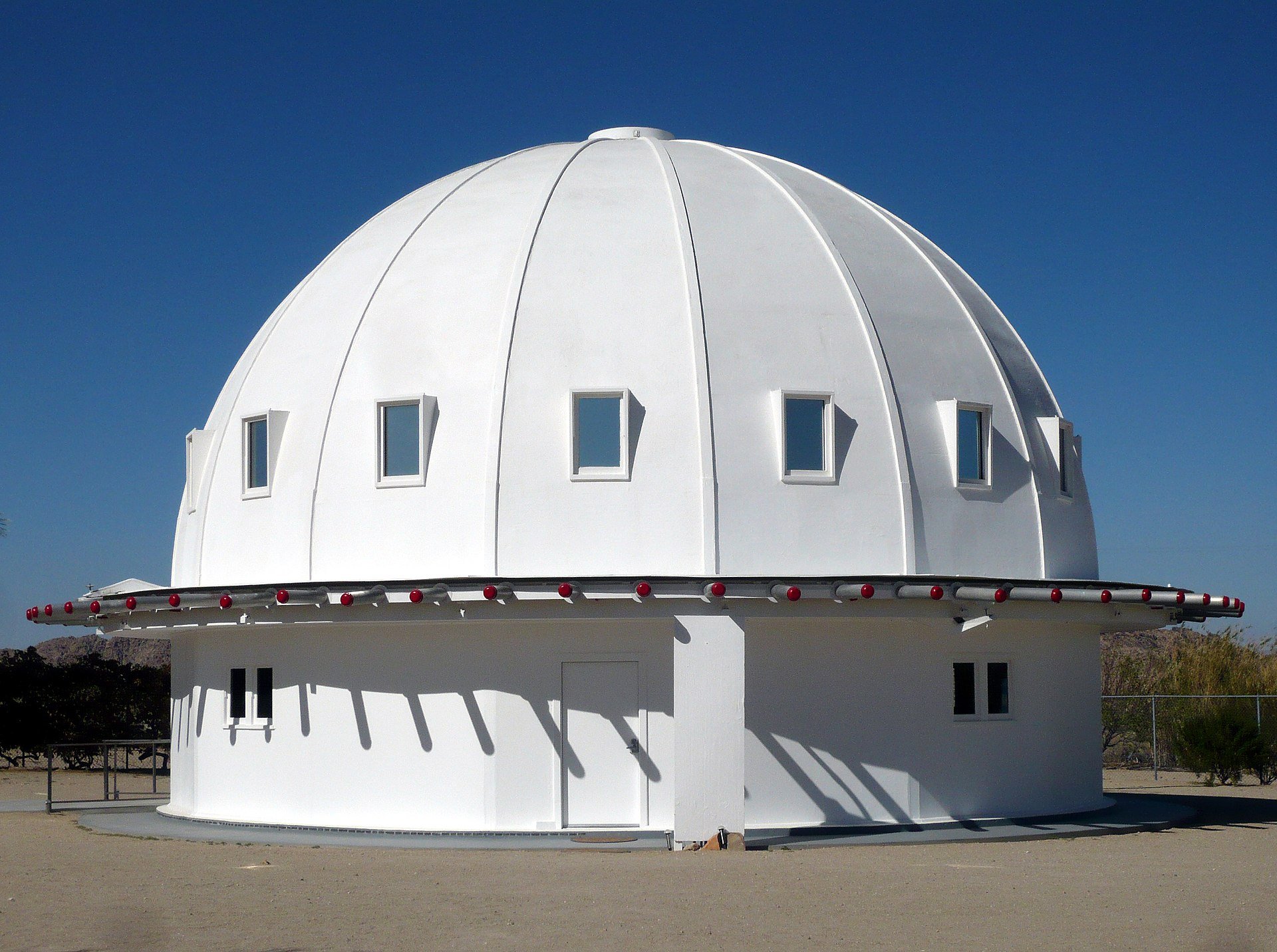 Former aeronautical engineer and test pilot George Van Tassel spent 18 years building The Integratron in Landers, California. The leader in the UFO community also claimed he really made contact with extraterrestrials there. While you might not see any aliens during your vacation, you can get sonic healing sessions. Some people consider the site a mecca for spiritual healing.

Next: This ode to the humble throne will make you reconsider your decorating. 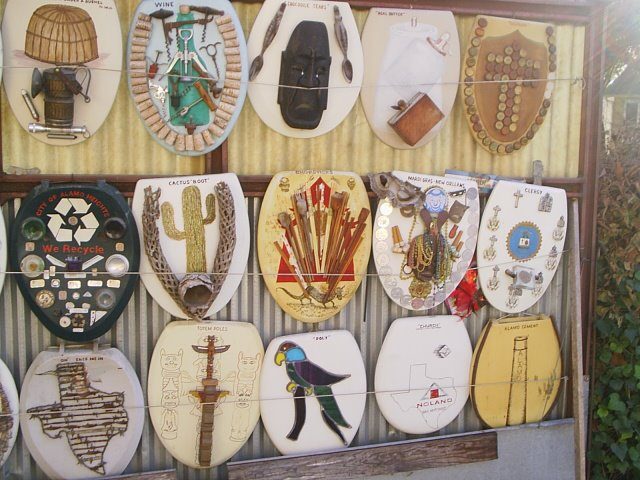 Some of us take pride in our work, but retired plumber Barney Smith took his love of the craft to a new level. He originally started Barney Smith’s Toilet Art Museum in his garage. Today, the San Antonio, Texas museum pays homage to the artistic toilet seats Smith has created. Travelers can bring discarded toilet seats to Smith, who will also engrave them if he uses your contribution.

Next: Antique store fans will also love this vacation stop.

6. The House on the Rock 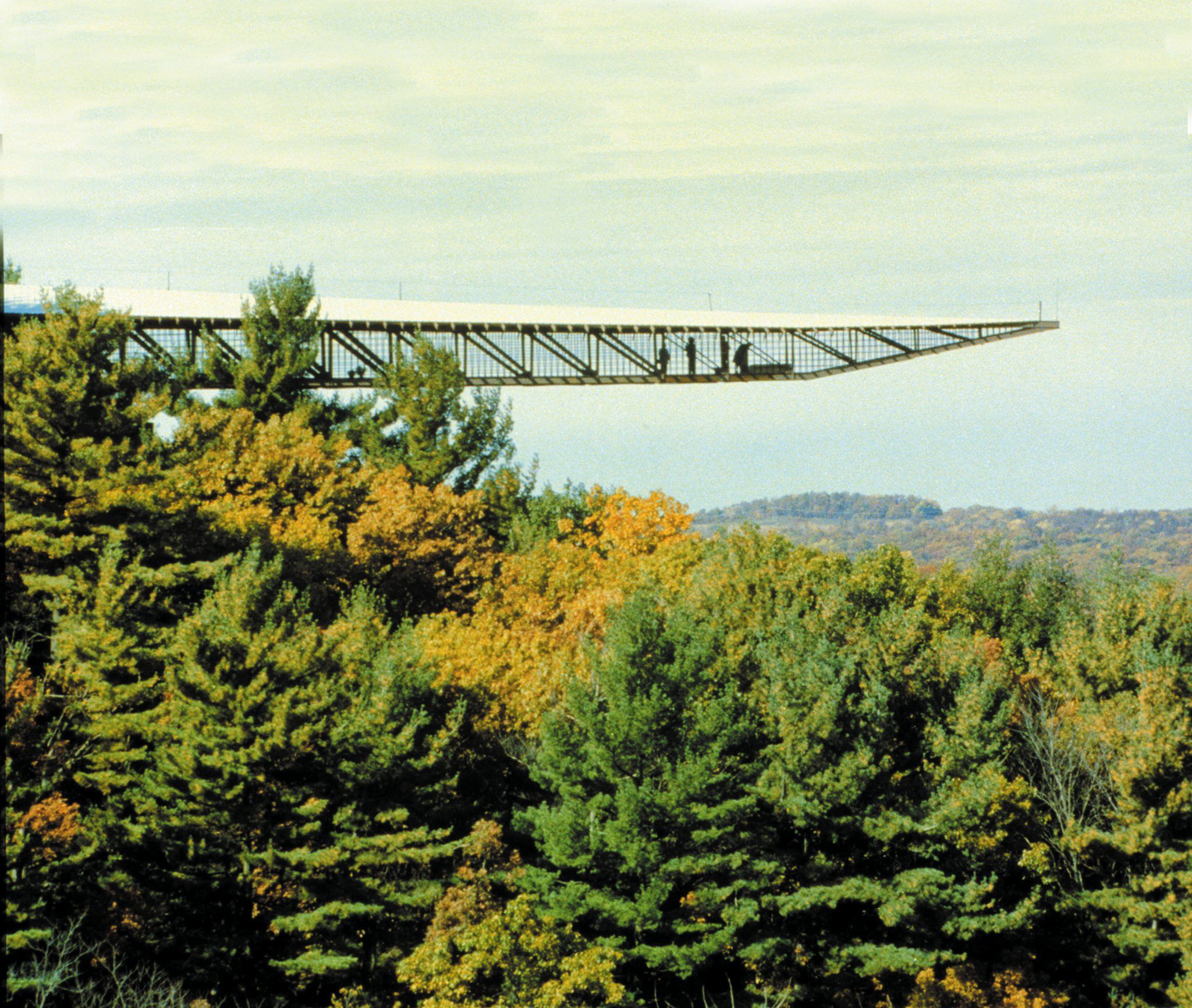 Originally opened in 1959, The House On The Rock in Spring Green, Wisconsin, houses one of the world’s largest collection of oddities. The complex has something new and exciting in every fully-stuffed corner. Check out music machines, a massive carousel, sea monster replicas, and more.

Next: Take a break from gambling at the following vacation spot. 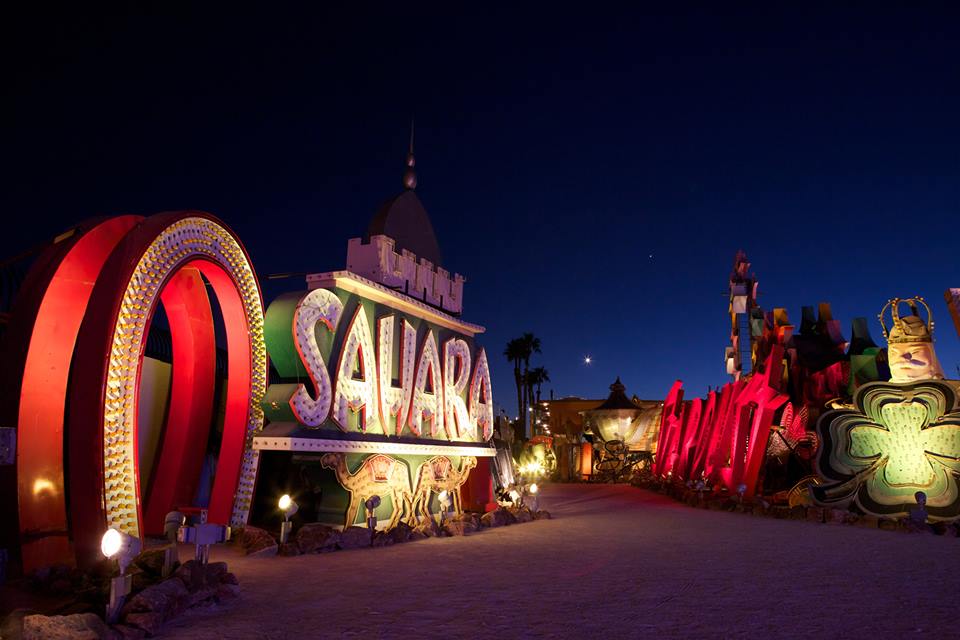 Most of us know Las Vegas for its slot machines, but Sin City has so much more. Once you get sick of gambling, live spectacles, and gluttonous buffets, check out The Neon Museum. Its collection of vintage and iconic Las Vegas signs will make you nostalgic for a bygone area. Don’t miss the Neon Museum Boneyard for a real trip back in time.

Next: This architectural oddity will also put HGTV to shame. 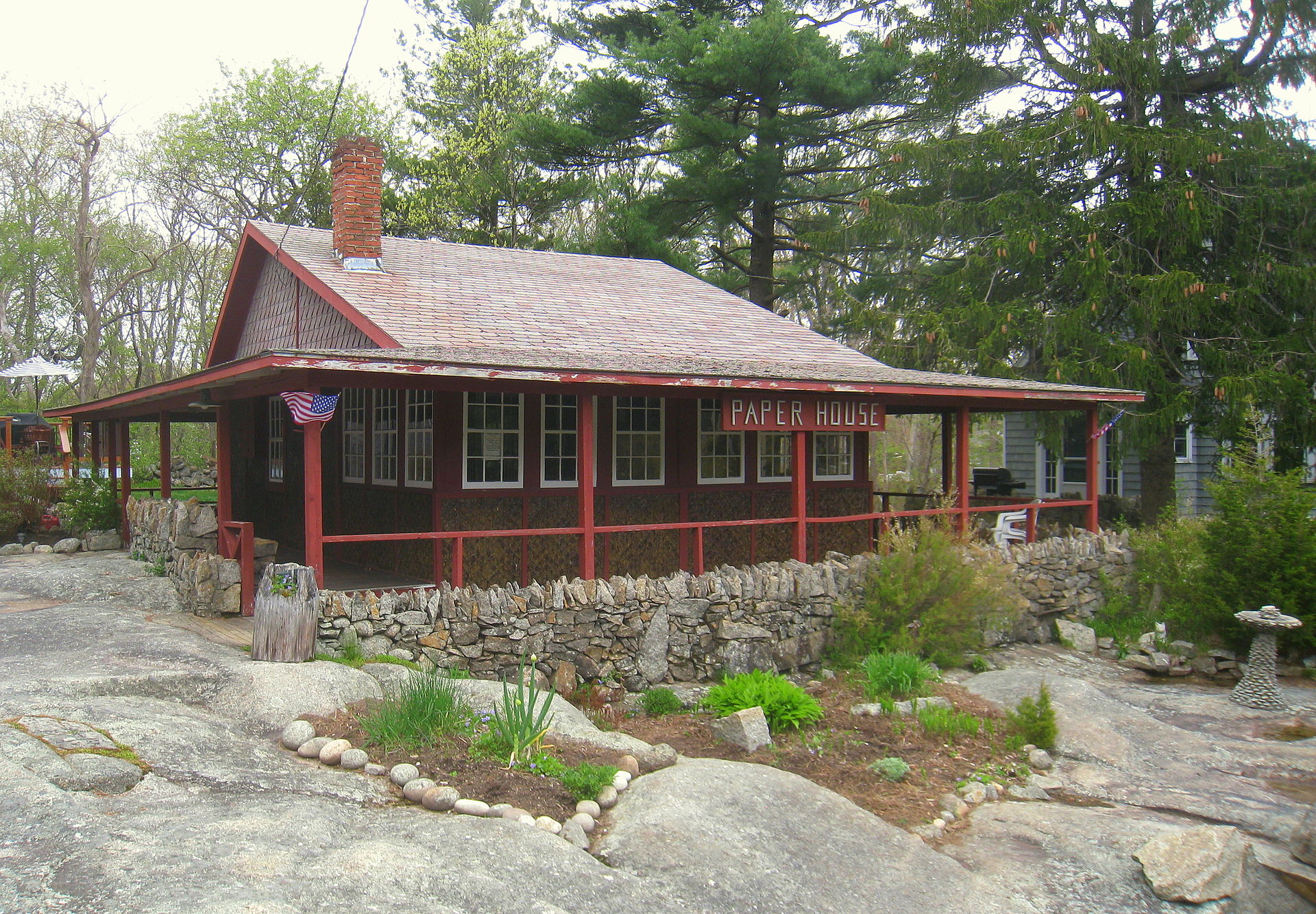 In 1922, a mechanical engineer named Elis F. Stenman decided to build a summer home out of newspaper, just to see if it would work. Today, the Rockport, Massachusetts Paper House has become a vacation attraction. Marvel at some next-level origami, like a paper piano and even functioning tables and chairs. Just don’t light any matches inside.

Next: Most of us try to stay far away from the following. 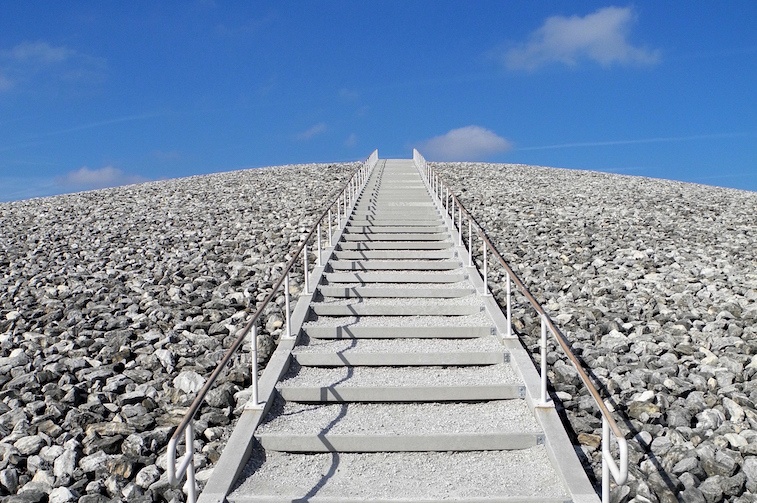 If you want to learn more about nuclear history, head to St. Charles County, Missouri. There, the Nuclear Waste Adventure Trail and Museum traces the history of the largest explosives factory in the country. You can also stand atop a mountain from a Cold War-era uranium refinery and look out over acres of radioactive land. Don’t worry, it’s all perfectly safe.

Next: This marvelous house also confuses its visitors. 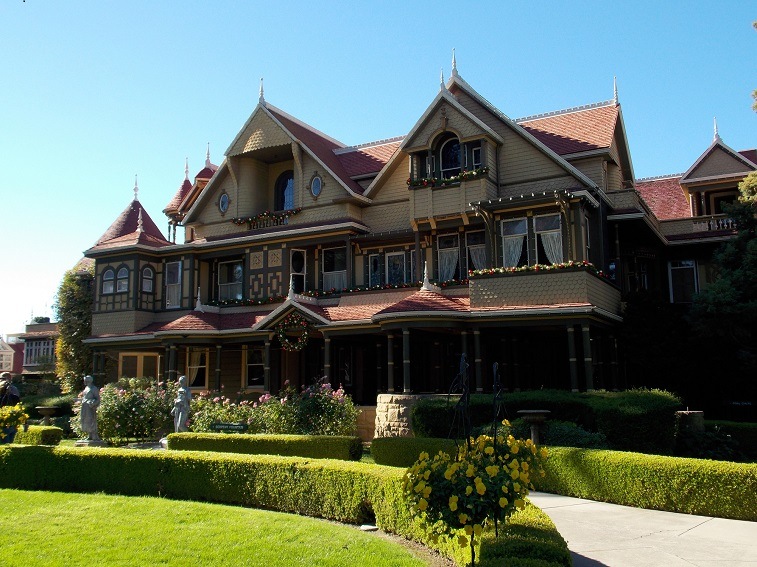 The historic Victorian mansion known as the Winchester Mystery House and its gardens. | Getty Images

The slightly unusual widow Sarah Winchester bought an unfinished farmouse in San Jose, California and transformed it into an architectural wonder. Over 38 years, she added stairs that lead to nowhere, doors that open into blank walls, and lots of secret passageways. As the story goes, she believed evil spirits haunted her, so she made the house so convoluted to confuse them. Today, the Winchester Mystery House confounds both architects and regular people.

Next: You might get hungry while visiting the following. 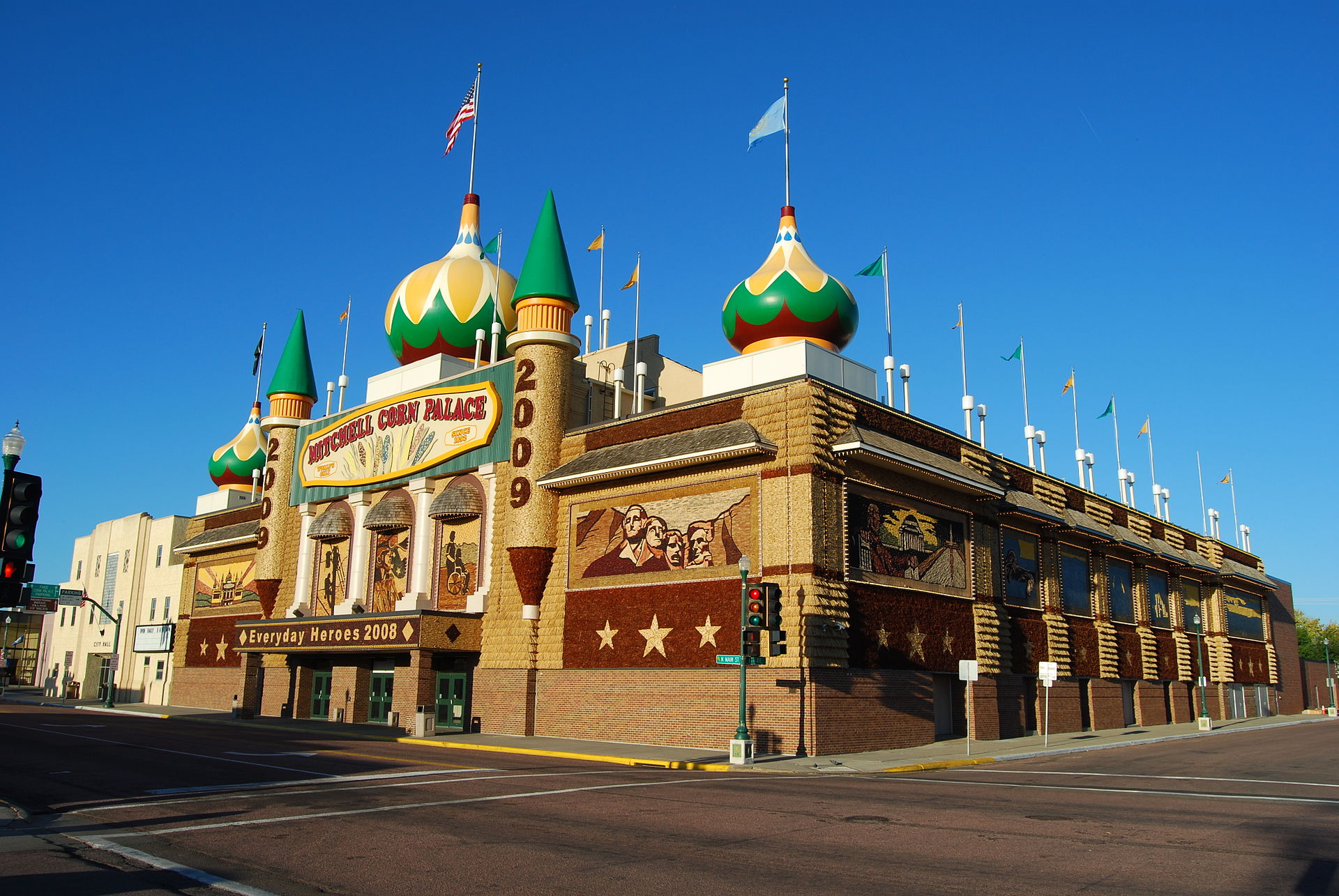 Learn all about one of the chief crops of the dust bowl in Mitchell, South Dakota. At the world’s only Corn Palace, decorated with millions of kernels of corn, you can pay homage to everyone’s favorite tasseled vegetables. Inside, you can find corn murals and exhibits explaining its history. Best of all? It’s free! As the world’s only Corn Palace, this bizarre attraction in Mitchell, South Dakota, is decorated with different colors of corn based on a theme.

Next: Paranormal fans will also want to hit up this spot. 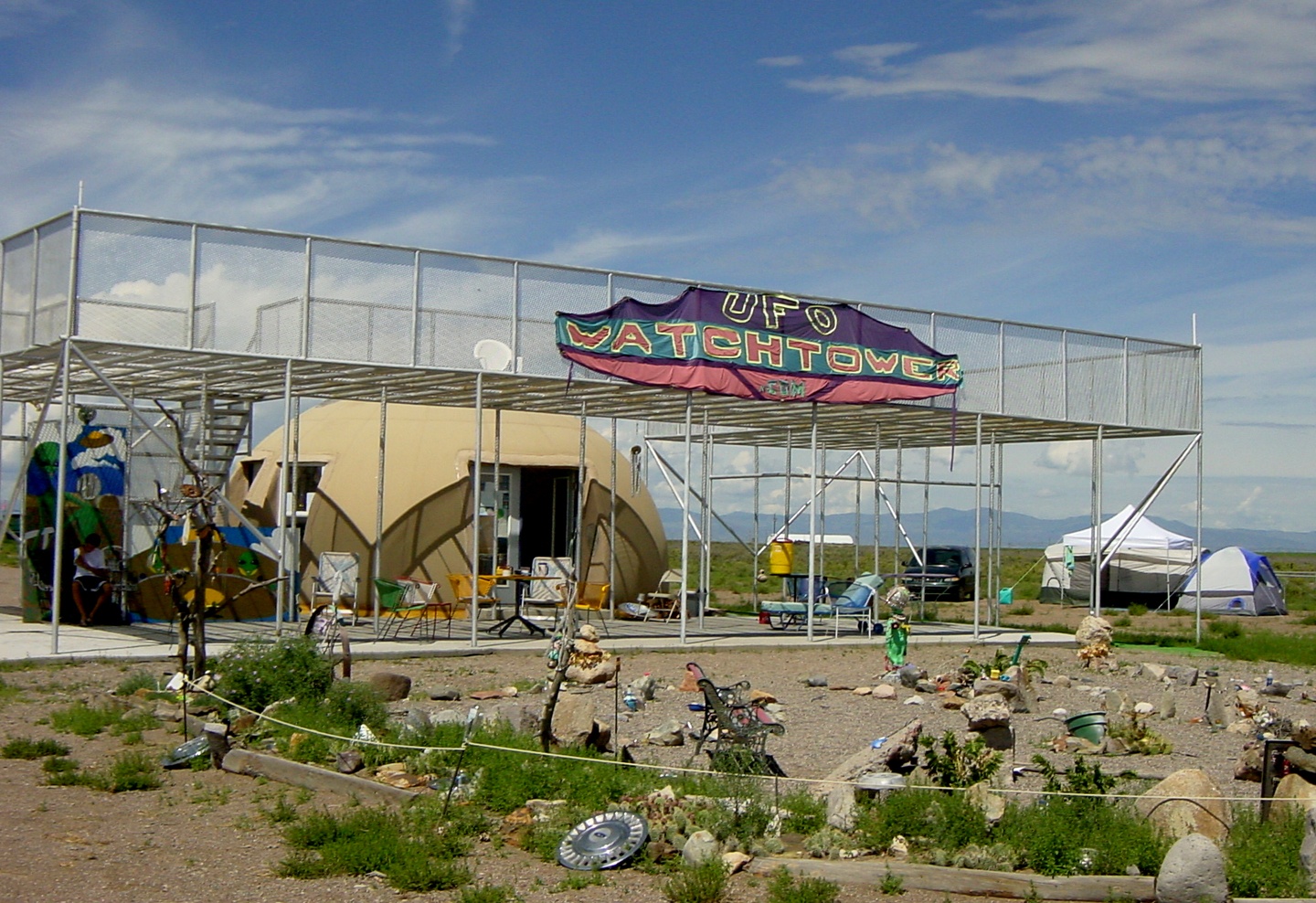 Whether you believe in UFOs or not, Judy Messoline of Hooper, Colorado, sure does. She created the UFO Watchtower to observe them, complete with a nearby campground and a gift shop. Visitors can make offerings to extraterrestrials at the energy vortexes, and some even get married while on vacation there. Your very best conspiracy theories will all find a home with Judy.

Next: Get a little macabre at the following museum. 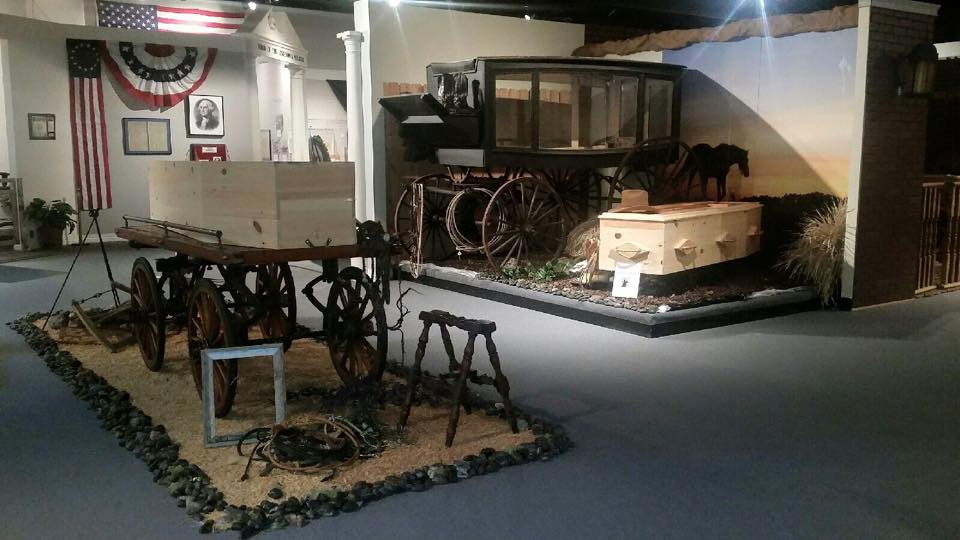 The National Museum of Funeral History |

Many people find death disturbing, but at The National Museum of Funeral History in Houston, Texas, you can learn more about it. This museum collects funeral items, rare coffins, and even recreations of famous figures. Set aside your squeamishness as you check out memorabilia from Marilyn Monroe, Michael Jackson, and other famous deceased people. You might also start planning your own fantastic funeral, right then and there.

Next: While some dispute the title, you have to check out this spot on your next vacation. 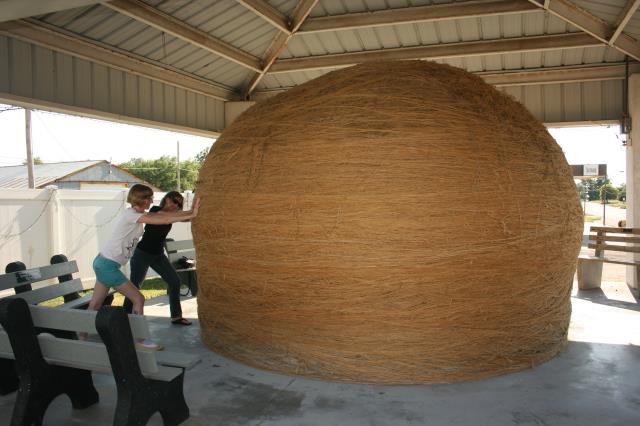 For some reason, people really want the coveted title of “world’s largest ball of twine.” Several locations have disputed it, but the most recent indication in 2014 finds it in Cawker City, Kansas.

Started by Frank Stoeber in 1953, the ball of twine weighed an enormous 19,873 pounds the last time someone measured in 2013. Every year, the town holds a twine-a-thon, to add to the behemoth. It might not make much of a day trip, but definitely stop for a photo-opp.

Next: Bring your camera for this site, too. 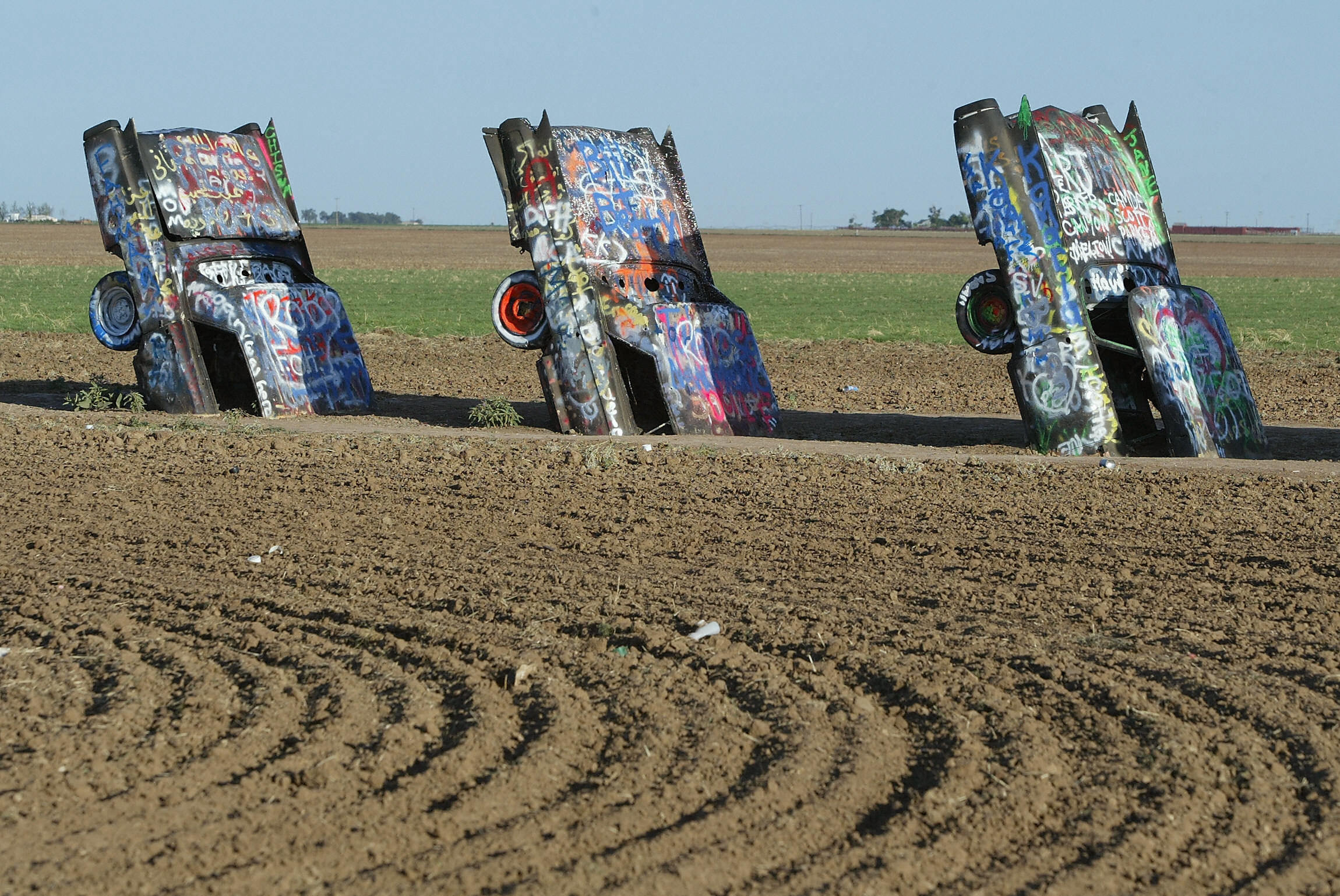 If you drive down Route 66, you can’t miss Cadillac Ranch, one of the country’s most iconic roadside attractions. Located in Amarillo, Texas, the art installation features 10 vintage Cadillacs buried in the sand with their noses down. Visitors come from far and wide to sign their names and pose in front of the graffitied cars, and you won’t want to miss your chance. Grab some Tex-Mex in town before you leave, as well.