America’s Oldest Restaurant Has Been Around For Over 300 Years

History buffs, ahoy! Whether you have a culinary road trip planned or live nearby, the oldest restaurants in the country have stuck around for a reason. Work up an appetite for these storied spots, and soak up some of the old-timey vibes with your meal. You’ve got to check out the landmark eatery that’s been open in the same New York spot for 300 years (page 9). 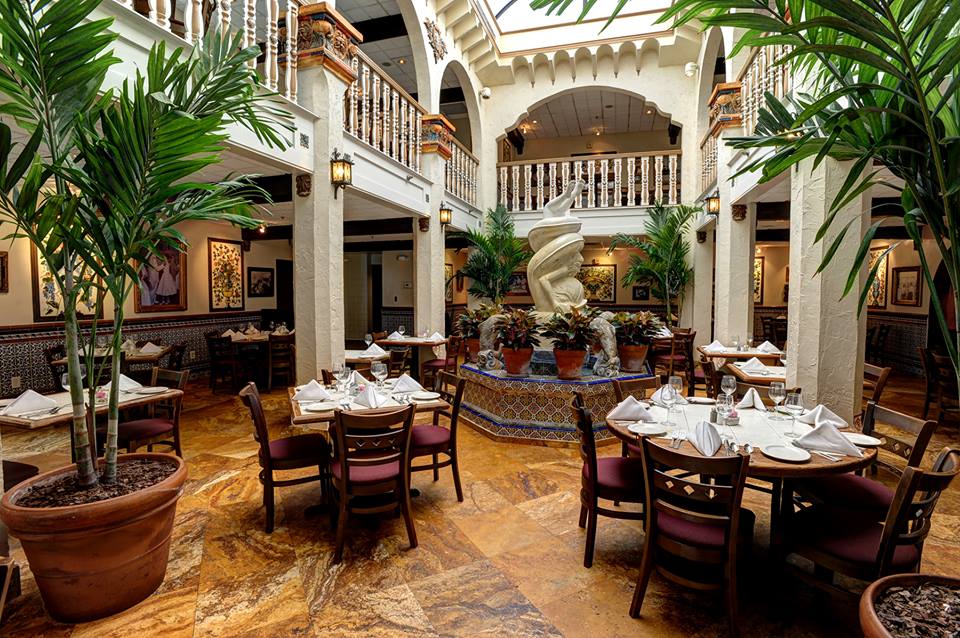 The oldest Spanish restaurant in the country first opened in 1905, making it one of the younger spots on this list. This extravagant Tampa restaurant first began creating Cuban specialties long before the missile crisis and eventual re-opening of relations between the two countries. Don’t miss the live flamenco performances as you chow down on delightful Spanish fare.

Next: Sit in JFK’s favorite booth at this oyster spot. 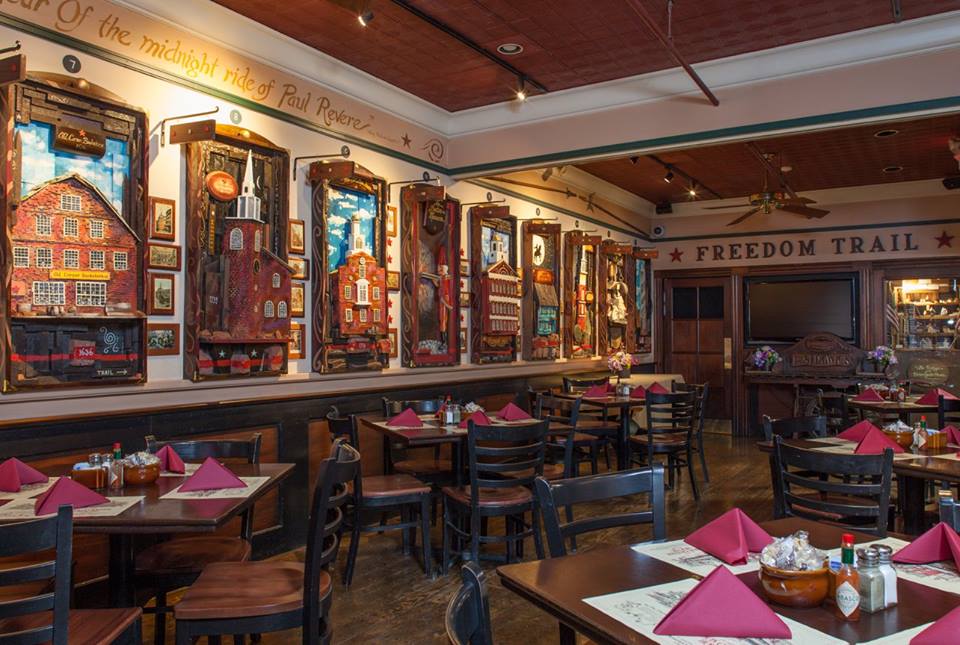 Built in 1704, Union Oyster House has served some of the nation’s founding fathers. When you visit, imagine Benjamin Franklin or John F. Kennedy sitting next to you. It became a restaurant in 1826, and you can recreate the olden days when you sit in JFK’s favorite booth. The “ye olde” designation fits.

Next: A famous politician loved this Midwestern restaurant. 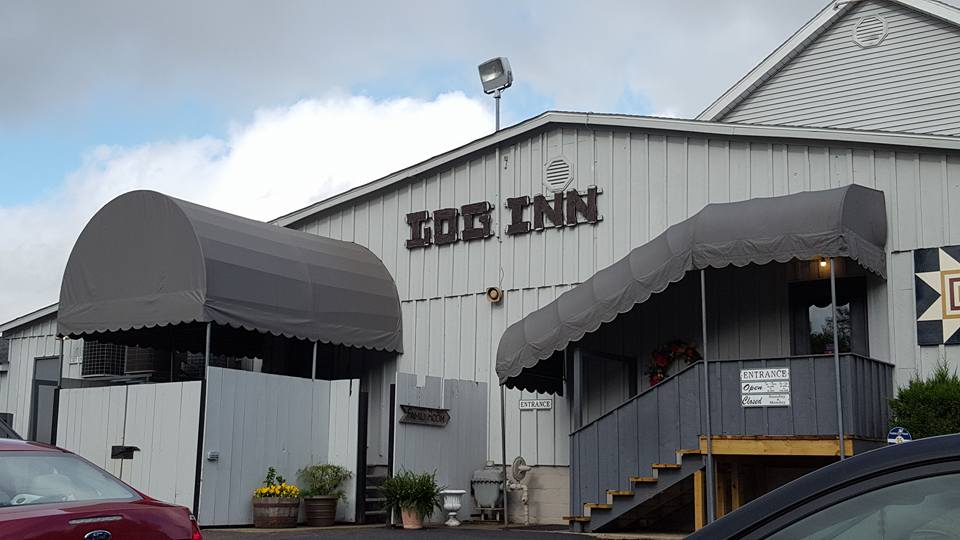 Southeastern Indiana’s Gibson County holds a historic spot; Abraham Lincoln once stopped there while campaigning back in 1844. It also was an Underground Railroad stop and a stagecoach landmark. At the Log Inn, you can get a hearty helping of history, along with some stick-to-your-ribs food.

Next: This Southern standard has remained open for 100 years, so far. 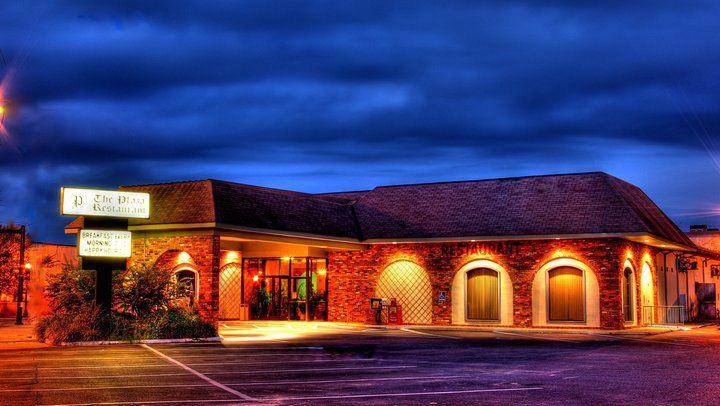 This storied Southern restaurant recently celebrated its 100th anniversary. It first started serving cocktails, lunch, and dinner in 1916, so you can only imagine what those walls would say. The Plaza earned a name for its pies, so grab a slice for dessert if you don’t fill up on shellfish first.

Next: The Golden State’s gold standard in historic dining 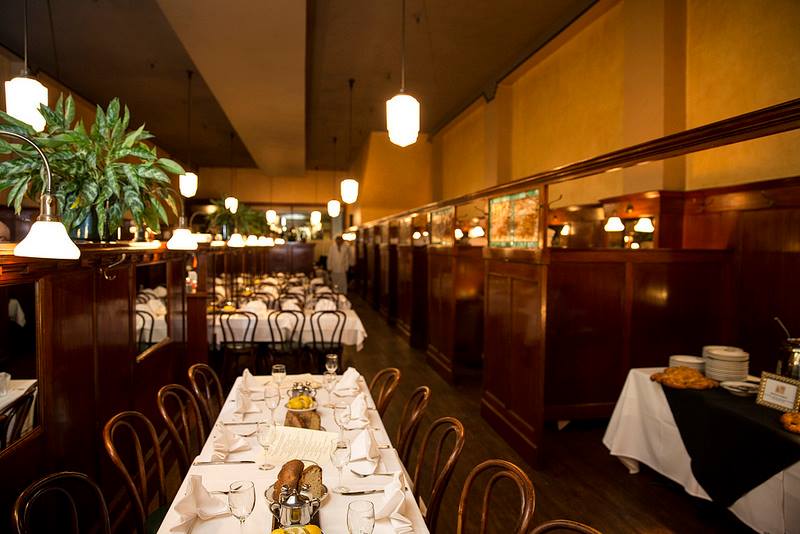 Check out the Art Deco vibe at this eclectic restaurant. Inside, you’ll take in high ceilings, wood paneling, and a majestic bar that will make it feel like 1849 all over again. Don’t skip the fresh seafood when you visit. But plan to wait; the restaurant also doesn’t accept reservations.

Next: Skip the fishing trip and eat these fresh-caught options instead. 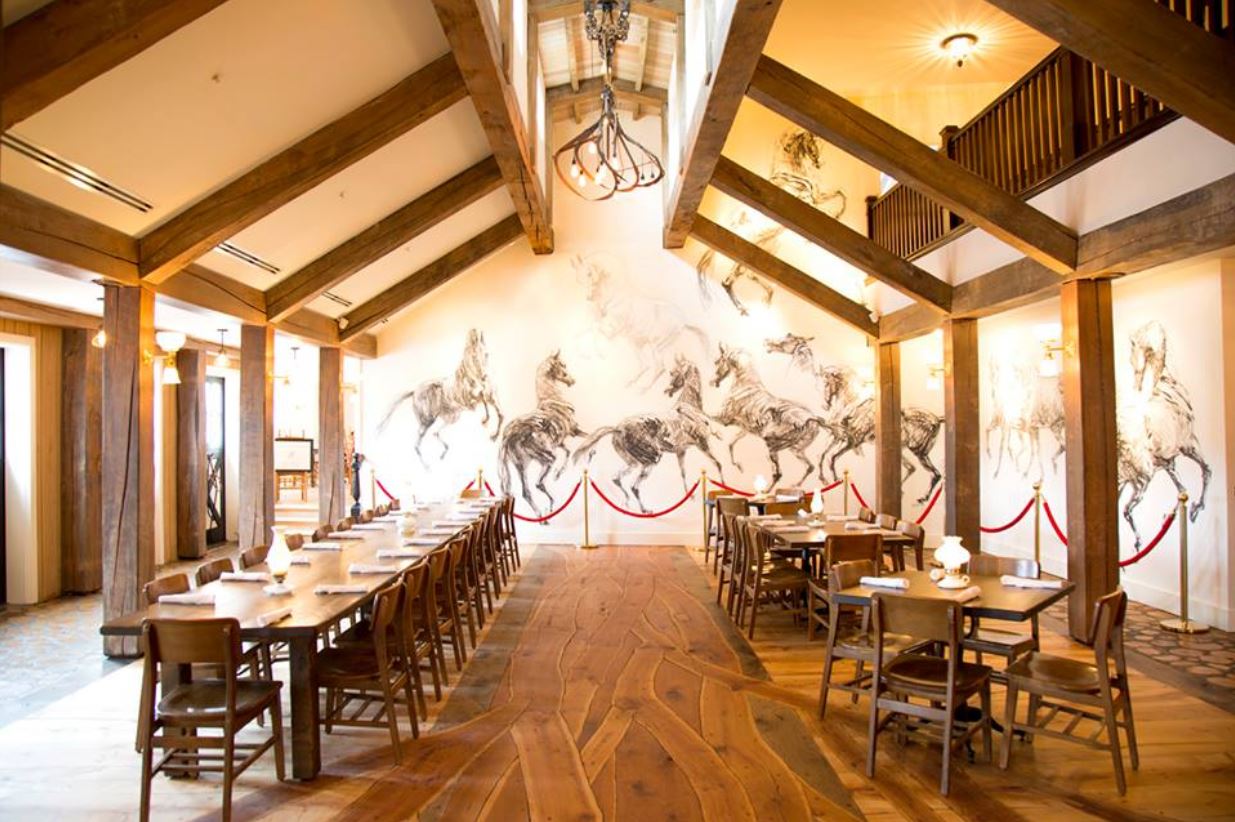 This gorgeous, renovated inn first served as a general store before transitioning to a breakfast spot for equestrian fox hunters in the 1920s. Operating for over 165 years, The White Horse Inn’s gorgeous farmhouse-style exterior and interior get diners in the mood for Great Lakes classics like fresh walleye. With cathedral ceilings and a full bar, it’s worth a visit for restaurant enthusiasts.

Next: For cold beer and a warm atmosphere, visit this Arizona saloon.

7. Arizona: The Palace Restaurant and Saloon 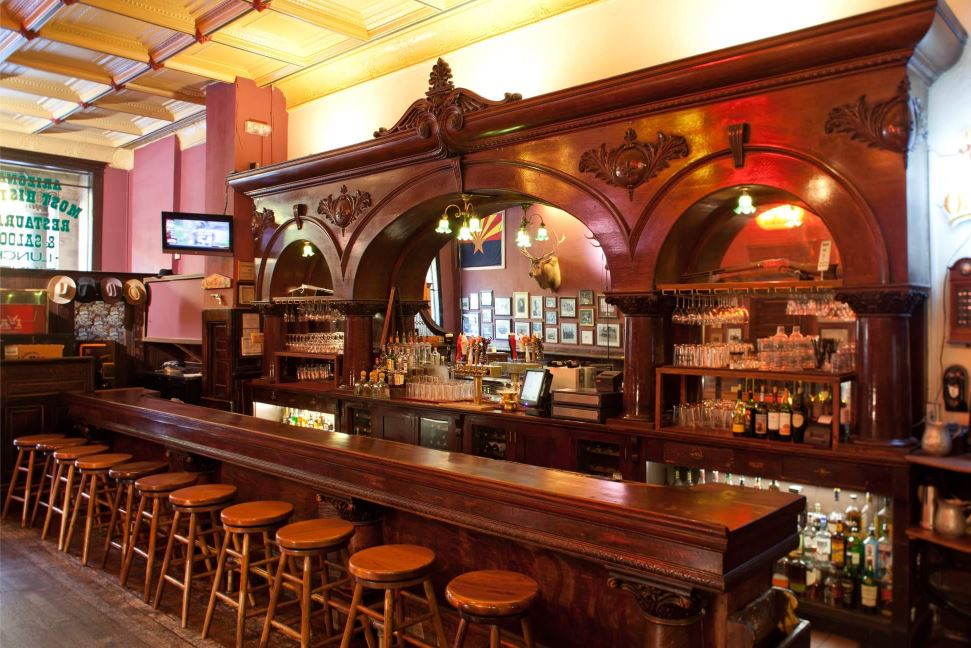 Western icons like Doc Holliday and Wyatt Earp flocked to this watering hole. Opened in 1877, The Palace Restaurant and Saloon is known for its authentic atmosphere and hearty menu. The fully restored space reflects the saloon’s original decor following a fire that occurred in 1901. And your servers don full costumes to get you in an Old West state of mind.

Next: You’ll recognize the guest list at this restaurant. 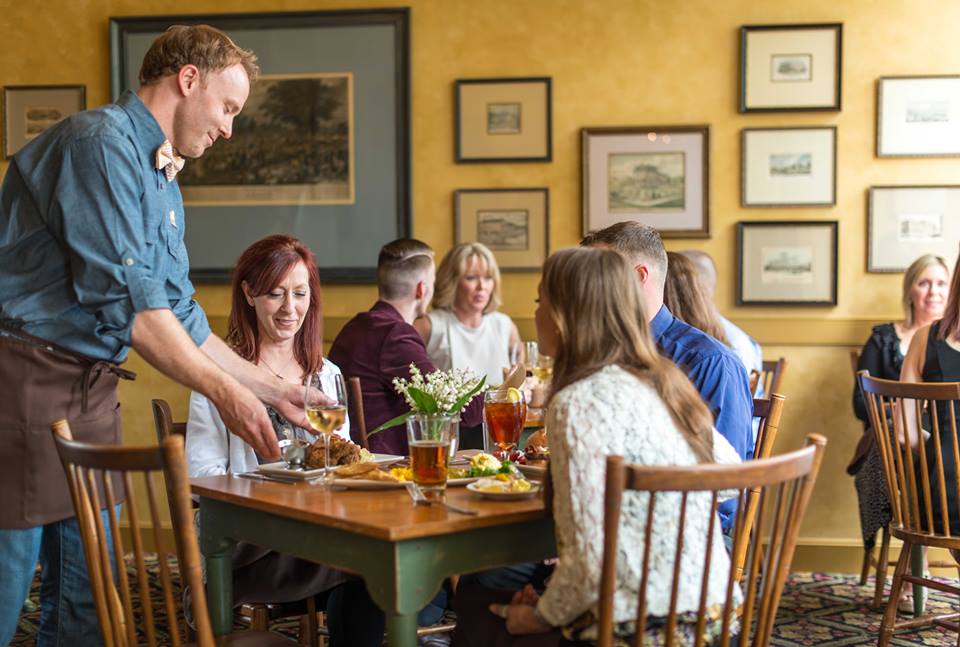 Since 1803, The Golden Lamb has served as the oldest continuously operated hotel and restaurant in the Buckeye State. It’s welcomed 12 U.S. presidents and famed abolitionist Harriet Beecher Stowe. Luxuriate on antique furniture in themed dining rooms, like the Dickens room (named for the novelist) or the Shaker room with signature furniture.

Next: The oldest restaurant in America is over 300 years old. 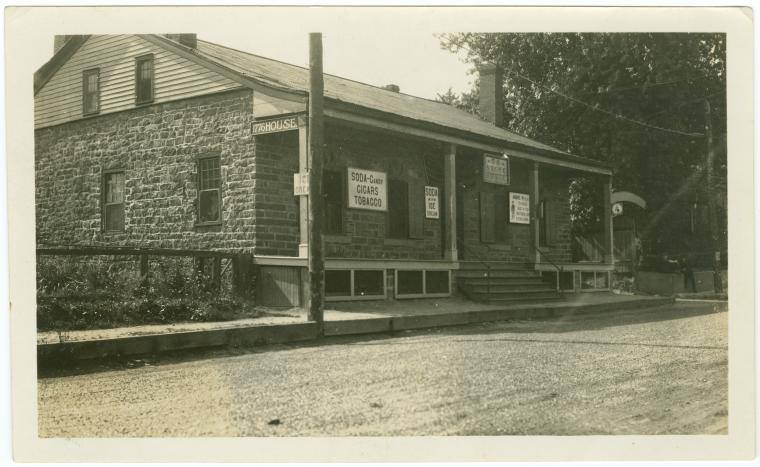 New York’s oldest tavern — a National Historic Landmark — has stood in the same spot for 300 years, making it one of the oldest in the country. George Washington and other patriots met there to strategize during the Revolutionary War. Enjoy the live entertainment and creative fare by a roaring fire. 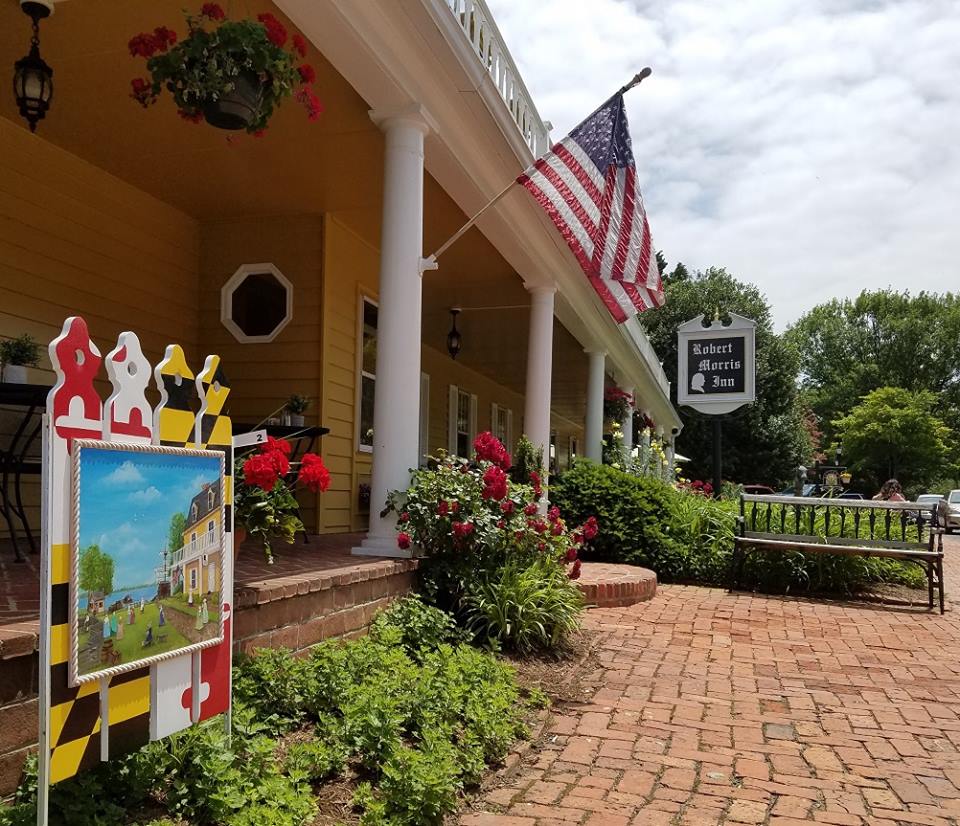 The home of a famous merchant who arrived in Oxford in 1738 became a now-famous inn. Now it ranks as the oldest full-service inn in America, with a civilized patio, elegant interior, and cozy tavern with a roaring fireplace. You can wake up to a delicious breakfast, or take the ferry over for a scenic supper on the veranda.

Next: If you like breakfast, stop at this next spot. 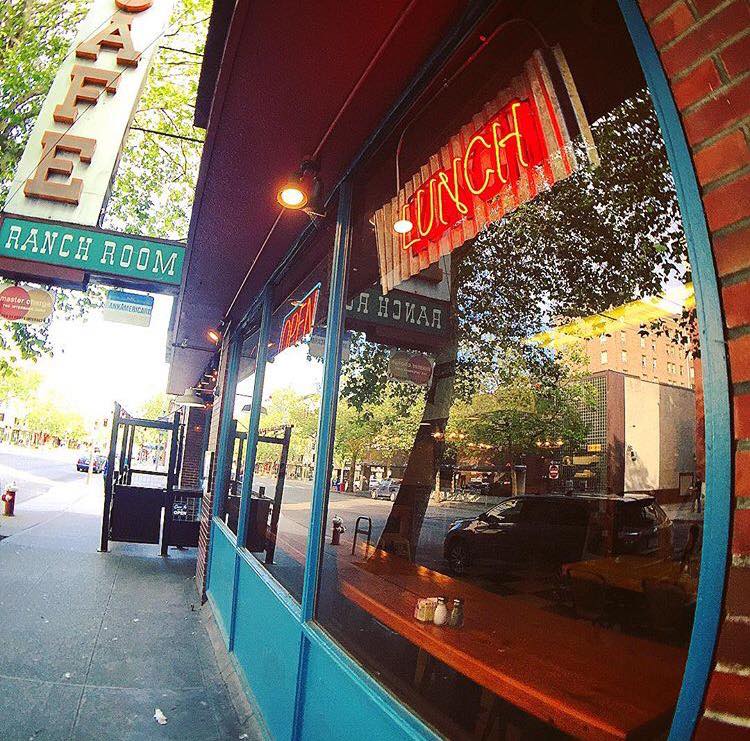 The Horseshoe Cafe is the oldest 24-hour restaurant in the country. Today, it only remains open until 4 a.m. on weekends for you night owls. The restaurant originally opened in 1886 to serve miners and settlers. It kept locals going during the Fraser Canyon Gold Rush in 1958. Today it serves all-day breakfast to hungry locals.

Next: Pirates once dined at the following establishment. 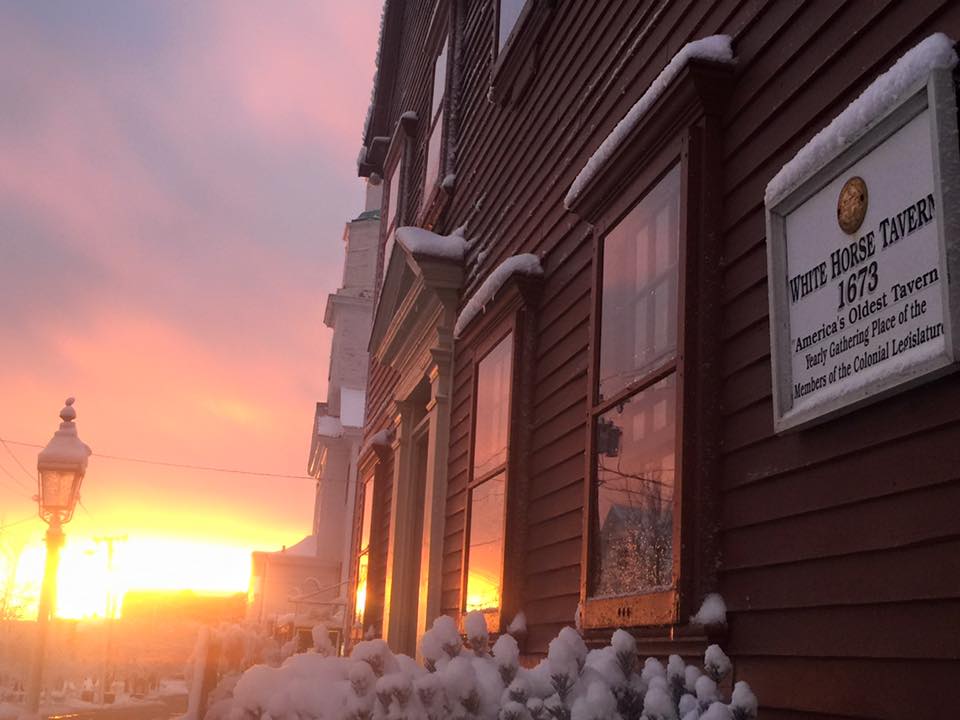 The oldest tavern in the country has kept its colonial charm since 1673. The White Horse Tavern has seen British soldiers, founding fathers, and even pirates darken its doors. Its commitment to fresh seafood from the nearby bay, local farms, and quality fare have all kept the restaurant going. Mind the dress code — bring out your collared shirts and business casual for dinner, and no sportswear can enter the dining room at any time.

Next: No list would seem complete without this last one. 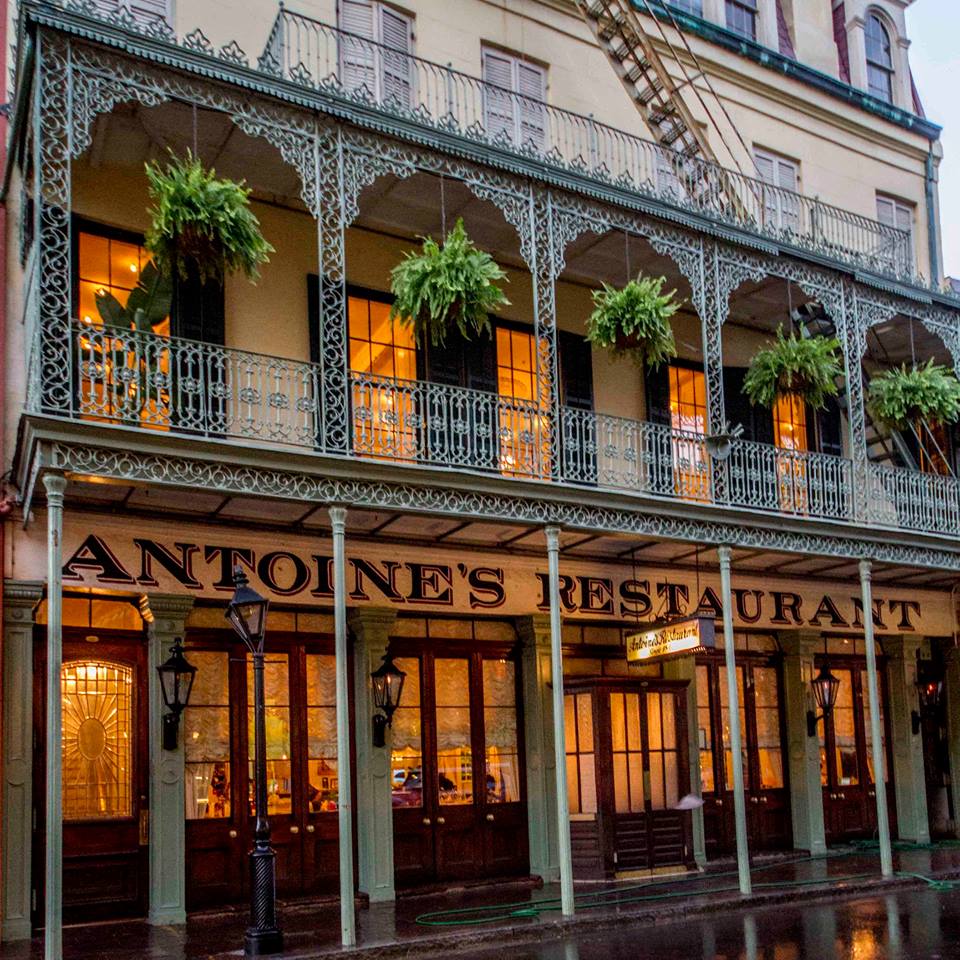 You can’t throw a stone without hitting a storied establishment in Nola. However, Antoine’s holds bragging rights as the oldest family-run restaurant in the country, as well as the oldest French-Creole restaurant in the city. The French Quarter restaurant first opened in 1840 and has served fine fare ever since. It also takes credit for inventing Oysters Rockefeller and serves up some rarefied fare in 14 dining rooms that can serve over 700 guests.

Next: You’ll feel like a fur trader at this wild restaurant. 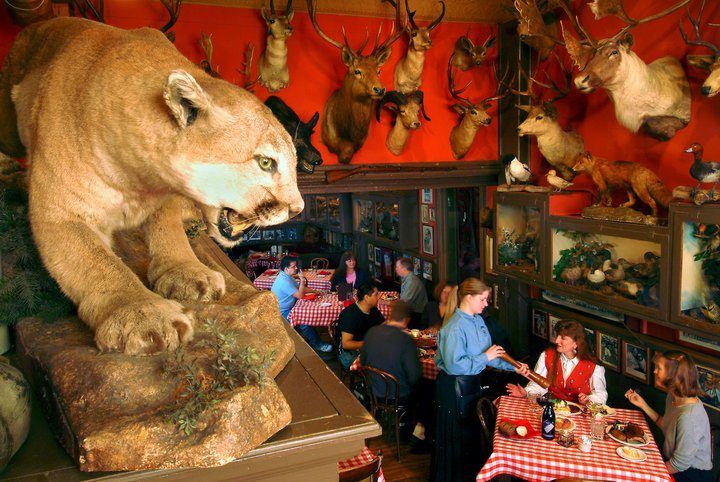 One of Buffalo Bill’s band members allegedly opened this Mile High steakhouse in 1893. At the time, it served as the local watering hole for miners, ranchers, and other hearty souls who populated the area. The squeamish may need to avoid eye contact with the taxidermy critters serving as decor. Vegetarians, beware: The menu features mostly meat.

Next: Grab your tri-cornered hat and head to this favorite. 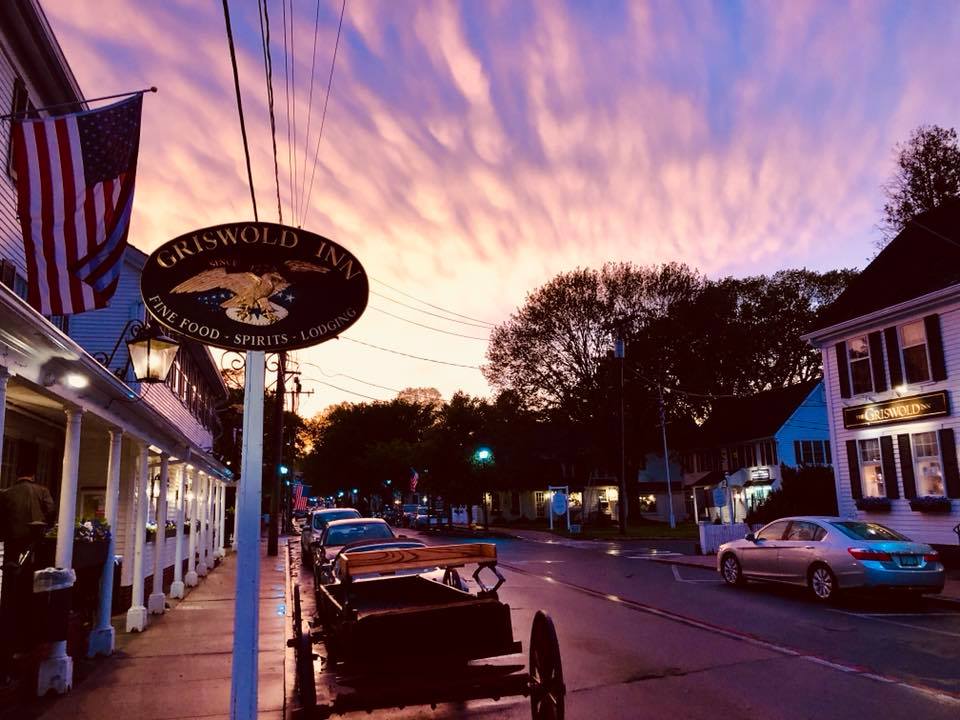 This Essex-based inn near the Connecticut River catered to soldiers and sailors when it first opened in 1776. Today, it sees more tourists than militiamen, but it still serves up classic American fare. Go for the gorgeous colonial-style architecture, and stay for the traditional chowder. Don’t forget to grab a pint in the taproom!

Next: You don’t expect a Chinese restaurant in this Western state. 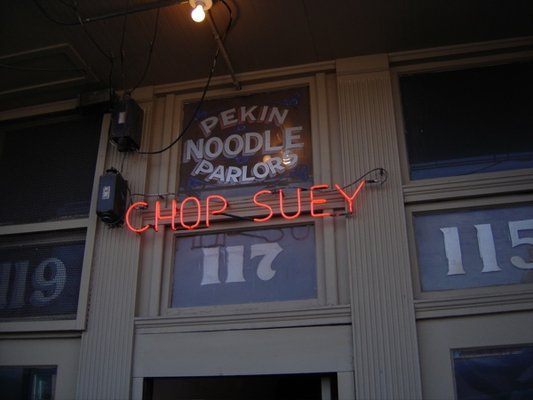 This family-run restaurant holds the distinction as one of the first in the country to serve up Chinese specialties. It opened in the late 1800s and introduced locals to chow mein, chop suey, and other Chinese favorites. The unusual layout also features 17 curtained booths so that diners can slurp their soup in peace.

Next: This historic tavern predates the Civil War. 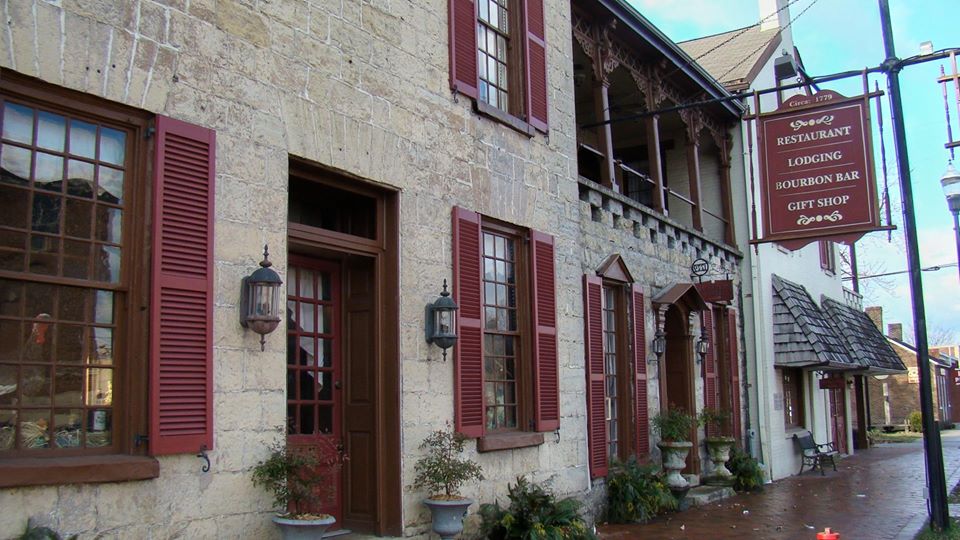 This Bardstown establishment serves as a restaurant and bed and breakfast, so you can stay with its ghosts as well as dine with them. The Old Talbott Tavern has operated since 1779. Pioneers, Civil War soldiers, and even unsavory characters have all darkened its doors. And yes, you might also run into a ghost or two.

Next: The Gold Rush inspired this “legendary” steakhouse. 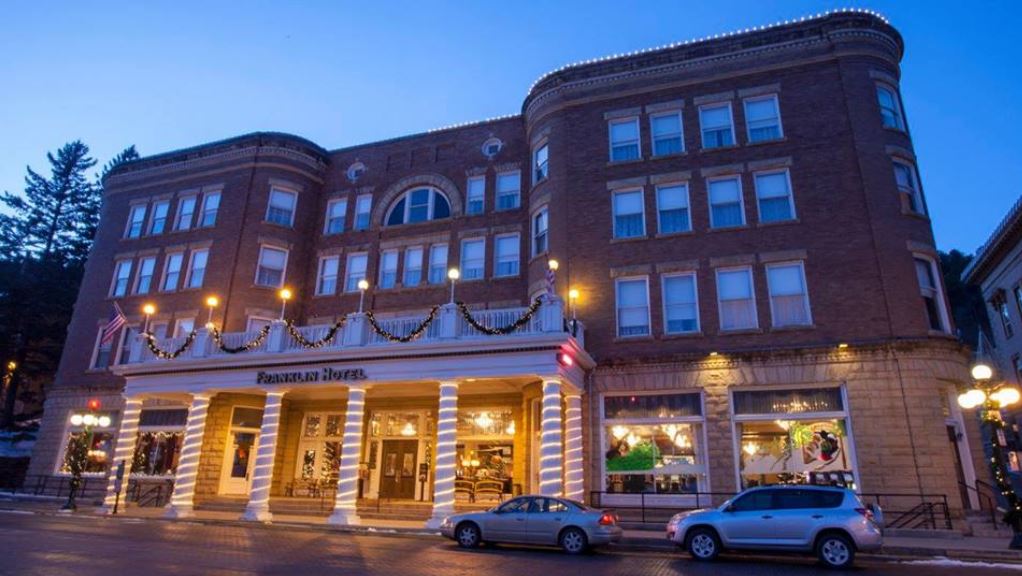 Also famous due to HBO’s Western TV series by the same name, Deadwood is home to an iconic restaurant that’s hosted Buffalo Bill, John Wayne, and Teddy Roosevelt. Part of the Franklin Hotel, Legends Steakhouse was built in 1902 on top of one of the first gold discoveries, which sent a flock of gold-diggers to the region, ready to find their fortune.