Every year, Bachelor Nation is graced with a new round of hungry-for-love contestants willing to do just about anything for a shot at love. But just like every other reality TV show, there’s a lot that goes on behind the scenes. And the Bachelor mansion, in particular? Well, it’s not all romance all the time.

When it comes to the world’s most famous bachelor pad, the house is just another family home when the cameras stop rolling.

Interested in hearing more? Good. Here’s how The Bachelor mansion transforms from a family home — yes, a family actually lives there — to the set of everyone’s favorite dating show.

1. The house was destined for The Bachelor even before it was built 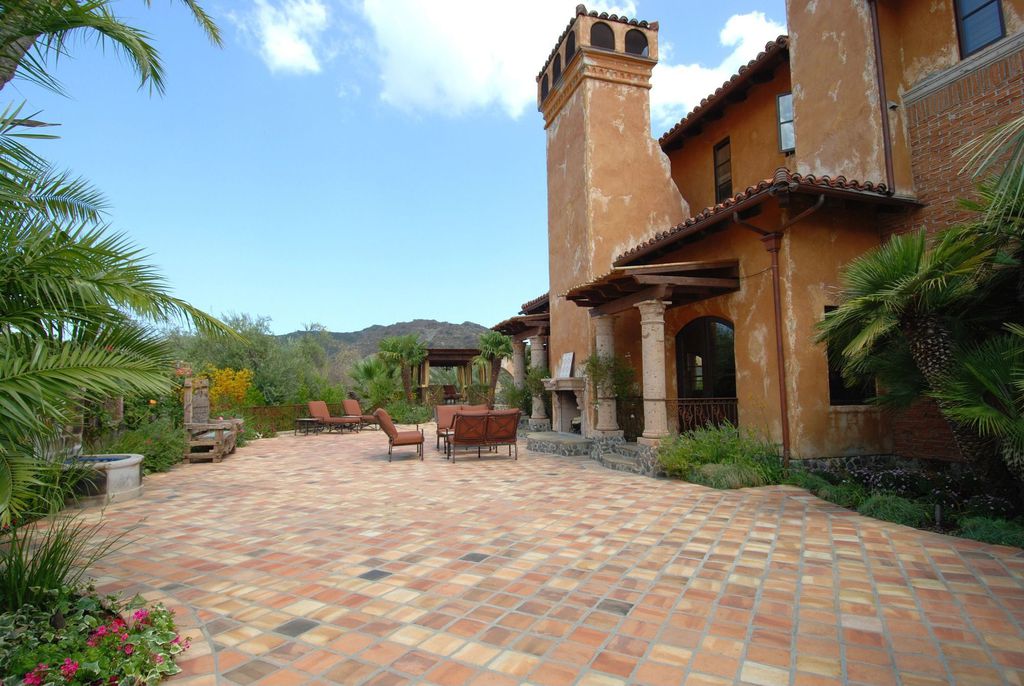 The owner of the property met up with the production team in 2001. | Zillow

The sprawling property seen on The Bachelor and The Bachelorette isn’t the TV show set you might assume. In fact, it’s been a family home from the very start. Built in 2005, the home belongs to Marshall Haraden, president of The Marshall Group, a general contracting and construction management company.

Back in 2001, Haraden met someone from The Bachelor production team who was scouting another property in the area for a movie. At the time, Haraden’s property was nothing more than a dirt lot.

Fast-forward to 2007, and the mansion was first featured during Brad Womack’s Season 11 of The Bachelor. The home has been the setting for the show ever since (aside from Season 8 of The Bachelorette with Emily Maynard).

Next: Here’s where you can find the gorgeous property.

2. The house is located in Agoura Hills, California

It’s not too difficult to get the exact details of the mansion. In fact, you can even book a stay for yourself if you’re that interested. The home, called Villa De La Vina, is a Spanish-style revival house located in the Santa Monica Mountains of Malibu.

The 10,000-square-foot estate, complete with a separate farmhouse, infinity pool, and indoor and outdoor fireplaces, is set on 10 acres of land in sunny southern California, in Agoura Hills to be exact.

Next: A lot goes into transforming the estate.

3. The mansion undergoes a total transformation 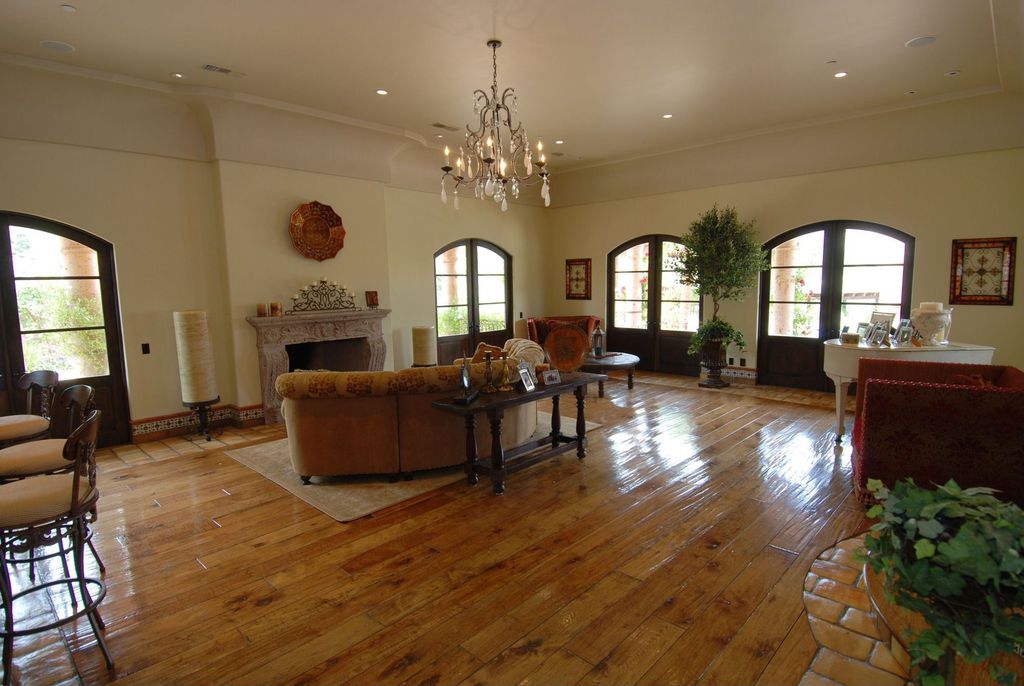 The house gets repainted every season. | Zillow

Obviously, there’s a lot that goes into getting the estate ready for the show’s contestants — and the viewers at home. As you’d imagine, the home looks quite different when it’s occupied by the family of six (though Haraden’s children no longer live at home full time).

Furthermore, the transformation requires a ton of paint. And at two coats of paint per season, the house’s colors depend on whether the star is male or female.

Next: The house looks completely different when the show isn’t filming.

4. Fans of the show wouldn’t recognize the house when ABC isn’t filming 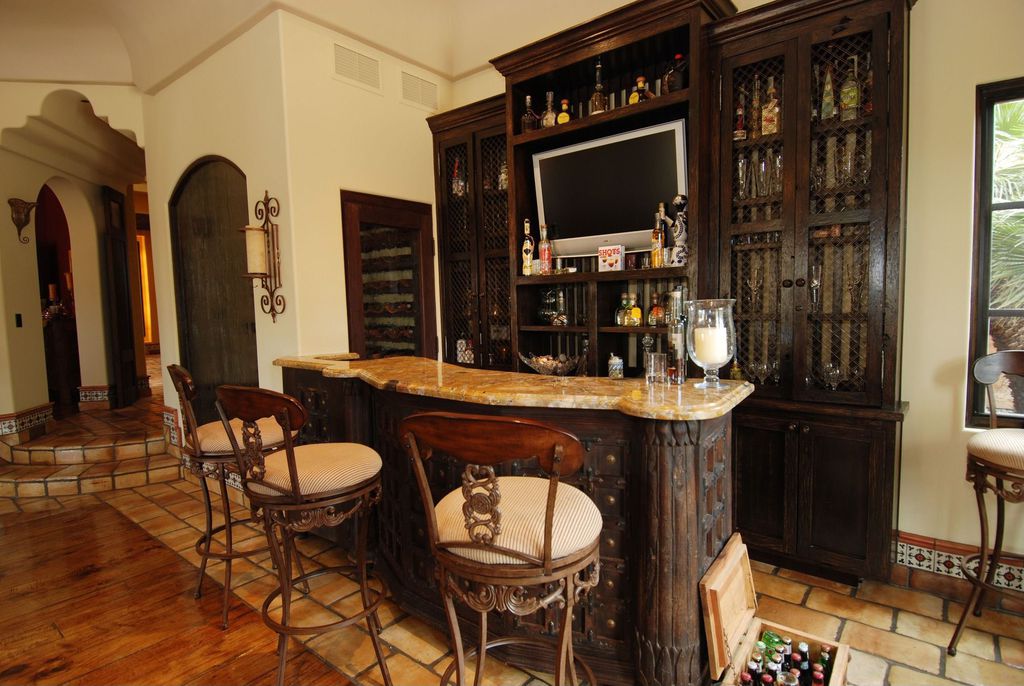 This is actually the rose ceremony room. | Zillow

You might be wondering just how different the inside of a house can look. The answer is very, very different.

For starters, ABC transforms the family’s den — which usually houses a pool table and bar — into an appropriate setting for rose ceremonies. And the scene just before the rose ceremony, where the bachelor or bachelorette longingly stares at each of the contestants’ photos, takes place in a room that normally serves as a bedroom. Additionally, a walk-in closet located in the master bedroom serves as a space for stashing luggage, along with a quiet place for Chris Harrison to nap.

Next: Here’s what the family has to do to accommodate the show’s production.

5. The family vacates the home twice a year 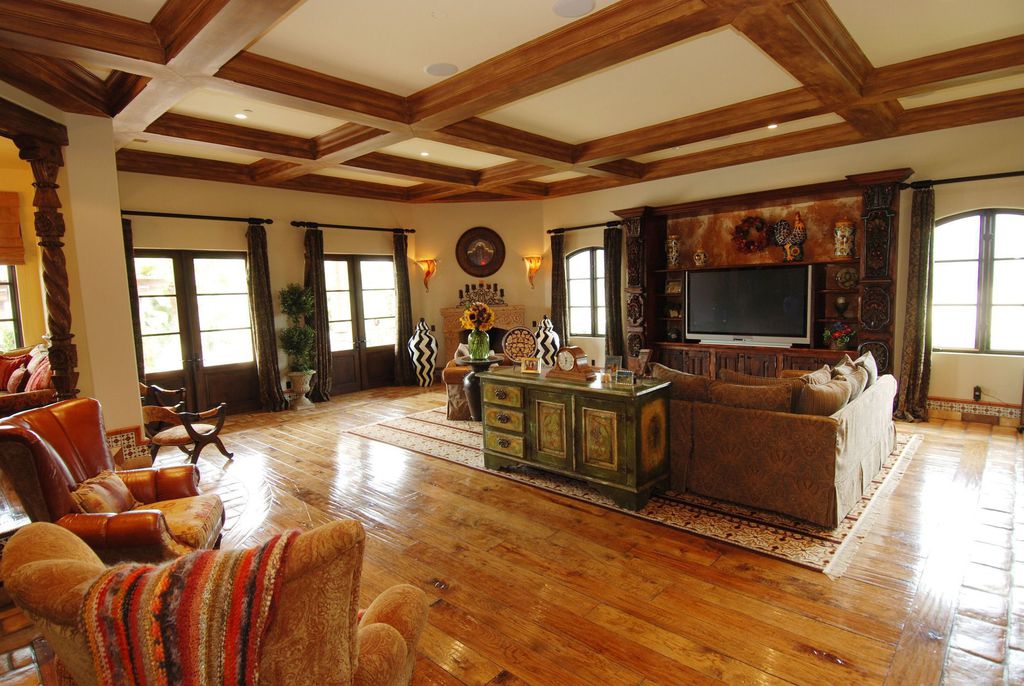 They leave the home twice a year, and the production team does the rest. | Zillow

The first two weeks are spent getting the home camera-ready. After that, filming begins. When it’s time for the hometown visits, the cast and crew move out and spend two weeks putting everything back to the way they found it.

These details beg the question of whether finding love in such a short amount of time is even possible. And in our opinion, it’s highly unlikely. Just take a look at how many of the show’s relationships have failed.

Next: Is the inconvenience really worth it?

6. The family is (obviously) compensated 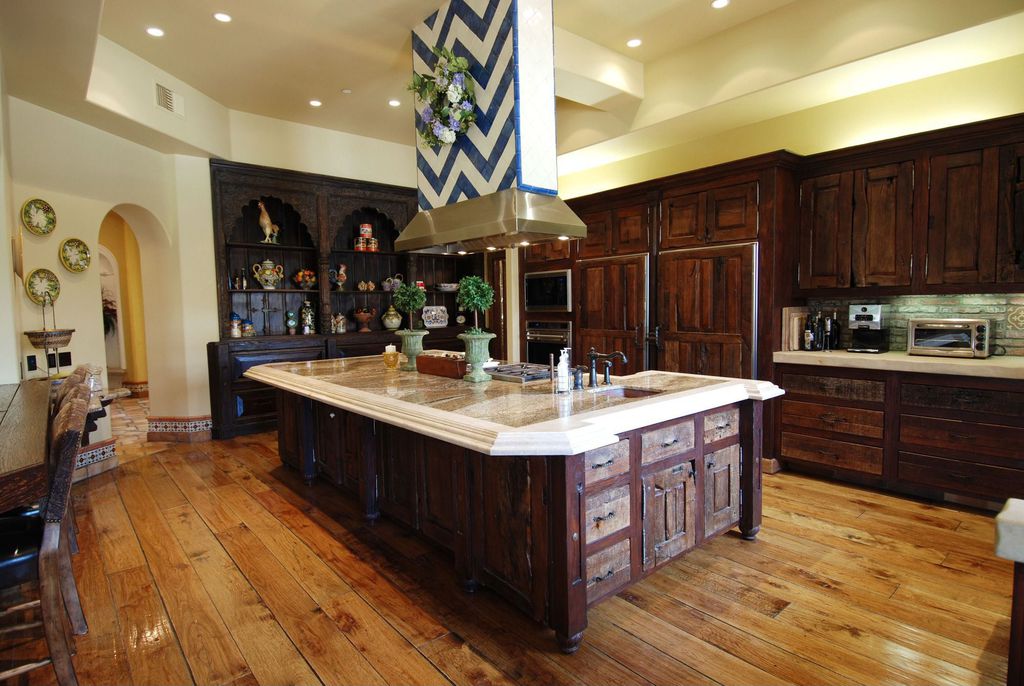 The family probably gets paid pretty well for using the home. | Zillow

To agree to an arrangement like this, there would have to be some serious incentive. After all, who wants to have to uproot their entire life twice a year?

While Haraden wouldn’t give Us Weekly the exact amount of compensation he receives, he did say the show pays for his family’s hotel accommodations while filming at the house. There was one point in time, however, that the process became too much for Haraden and his family, which brings us to our next point.

Next: The rental agreement deal isn’t without its frustrations.

7. The family once moved out of the house for 6 years The family hangs out with some of the crew off set. | The Marshall Group via Instagram

The process of moving in and out of the house is “definitely a hassle” at times, Haraden says. In fact, it became such a hassle that the family moved out for six years so as to not disrupt the kids’ back-to-school schedules.

During that time, Haraden put the property up for sale. In 2008, the colossal estate was listed for $8.75 million. The home, of course, never sold, and the Haraden family has been living in the lap of luxury ever since the children finished middle school.

Next: There’s a lot to love about this sprawling estate.

8. Other shows have filmed there, too 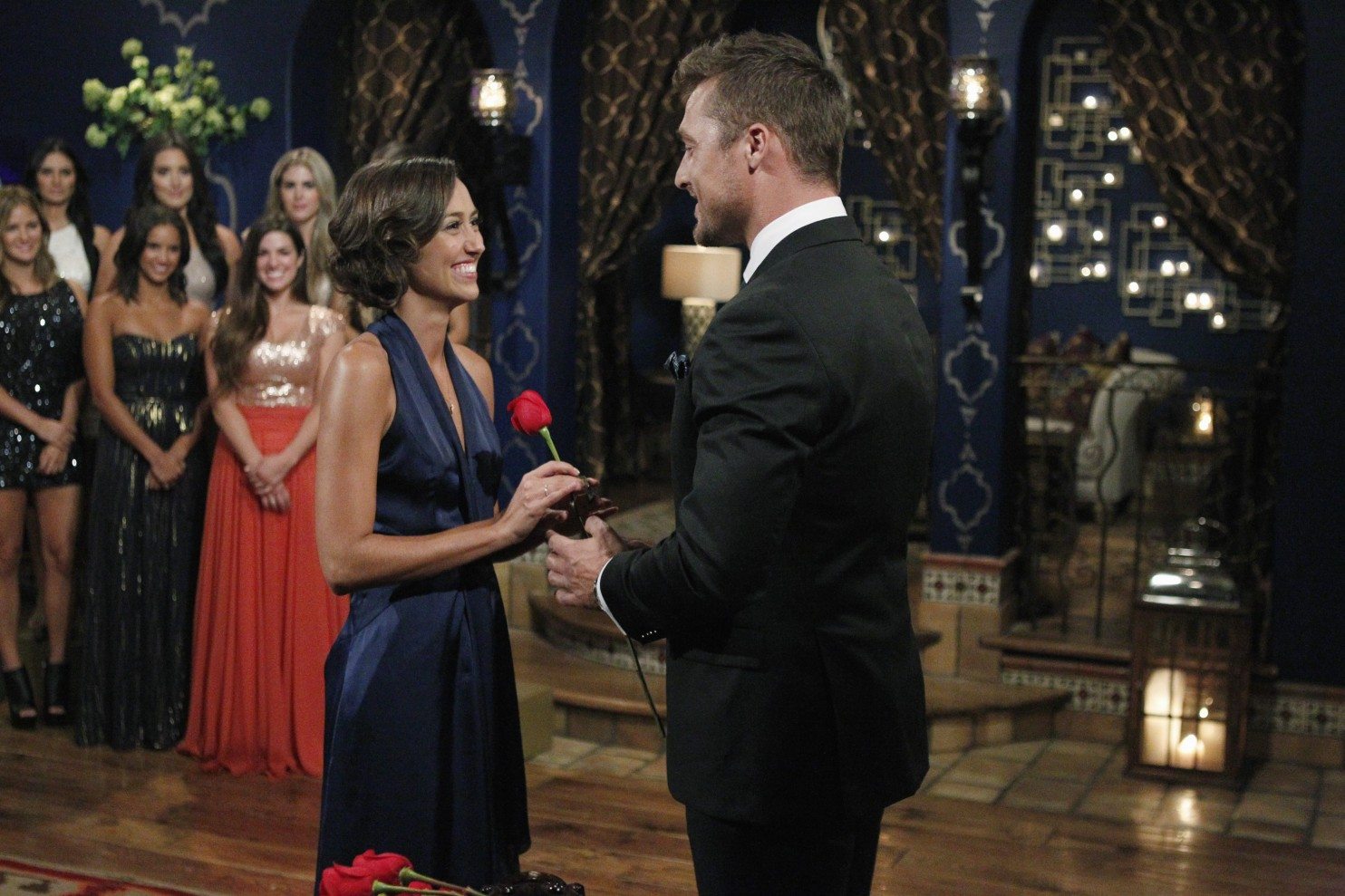 The family is a pretty good sport about crews coming in to change up their home. | ABC

Villa De La Vina is quite impressive. It’s so impressive, in fact, that the property has attracted more than just the producers of The Bachelor. According to Today, “The six-bedroom, nine-bathroom home is also featured in several commercials and shows like ‘Quantico.'”

Despite any appearances the home has made in other shows, though, there’s no doubt it’s best known for being the ultimate Bachelor pad. And Bachelor Nation fans cannot get enough. Case in point: Harding told Today, “Sometimes when we come home for dinner at 9 or 10 at night, there’s people outside the gate climbing over the fence or on top of their cars trying to take pictures.”

No wonder the family moved out at one point.