These Athletes Died While Competing in the Olympics

Everybody loves tuning in to the Olympics (or attending in person) and watching our favorite athletes go for the gold. We all know that Olympic athletes take risks, and often get injured. Competing at such a high level isn’t for the faint of heart, after all. But what few of us realize is that over the years, a handful of athletes have died competing at the Olympics. It’s rare, but unfortunately, it does happen.

Times reports that some Olympic athletes have died at the games due to illness, car crashes, and even terrorism. But the following athletes died while competing or practicing Olympic sports at the games.

Time reports that Francisco Lazaro, a marathon runner from Portugal, died a day after he collapsed from sunstroke and heart trouble. Lazaro had run just over 19 miles prior to collapsing, and he died in a Stockholm hospital. Time notes that Lazaro’s was the first death of an athlete at the Olympics during a competition.

Grunge reports that one author uncovered a possible cause of death. Lazaro worried about getting sunburnt during his marathon, and covered himself in a layer of wax that interfered with his body’s sweating process and possibly caused him to overheat.

Next: This Olympic boxer may died of complications from injuries he sustained during his match.

The boxer died from his injuries. | iStock.com

OlympStats reports that Nicolae Berechet died after competing in the 1936 Olympic Games in Berlin. A Romanian boxer, Berechet lost his first round match in the featherweight class on August 11. OlympStats notes that his injuries proved fatal in that pre-antibiotic era. Three days later, Berechet died of sepsis that set in due to an infection of a carbuncle, or an abscess under the skin.

Next: This athlete died in a demonstration sport. 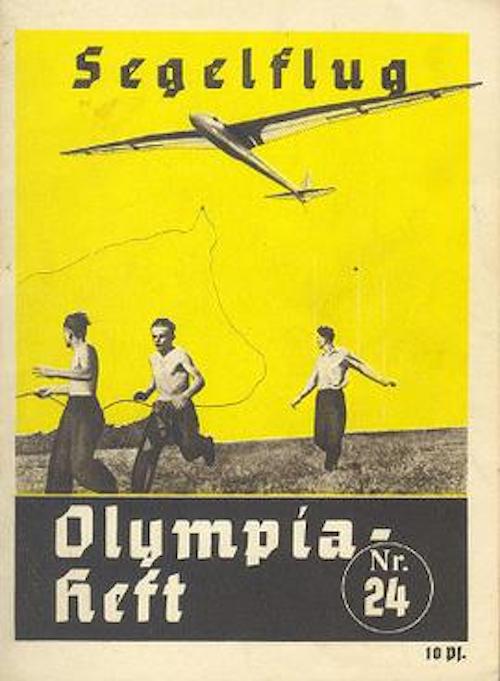 Gliding was part of the 1936 Olympic Games. | Theo’s Little Bot via Wikicommons

Olympic athletes participate not just in official sporting events, but also in demonstration sports. The idea is that those sports might become official Olympic sports someday. Grunge reports that some of these sports “are weird.” The 1900 games, for instance, included pigeon racing. Gliding served as one of the demonstration sports at the 1936 berlin Games.

Seven countries sent glider pilots to demonstrate the sport. But the day before the competition, Austrian pilot Ignaz Stiefsohn crashed and died during practice. The demonstration went on. But gliding never made into the games. In fact, the next Olympics were canceled altogether due to the war.

Next: As with other Olympic athletes who died at the games, this cyclist’s cause of death became the subject of controversy.

Time reports that Danish cyclist Knut Jensen collapsed and fractured his skull in the middle of a road race at the 1960 Olympics in Rome. About a year later, according to Time, The New York Times reported that Jensen’s death was due to heatstroke.

Later on, it came to light that Jensen had taken stimulants before the race. In fact, Jensen’s death is cited as the first connected to the use of performance-enhancing drugs at the Olympics.

Next: This athlete died after trying to avoid colliding with a crowd.

The road might have been too dangerous. | Hulton Archive/Getty Images

Time reports that Australian skier Ross Milne died after flying off the course and crashing into a tree during his training at the 1964 games in Innsbruck, Austria. Initially, the International Olympic Committee said that Milne was too young and inexperienced for the slope. But Time reports that Milne’s crash actually occurred because he had to swerve to avoid a crowd of contestants in the middle of the course.

Further, Grunge notes that Innsbruck didn’t get much snow in 1964. So officials had to truck in extra snow, resulting in a track that was flat, fast, and very dangerous. “It was studded with rocks and lined with trees,” Grunge explains. “And even the newspapers were calling it ‘A trapeze act without a net.'”

Next: This Brit is one of several Olympic athletes to die competing in luge.

Time reports that the same year that Milne died, British luger Kazimierz Kay-Skrzypecki also died in a training wreck. Luge is a famously dangerous sport for Olympic athletes. But Kay-Skrzypecki remained the only luger to die during the Olympics until the 2010 death of Georgian luger Nodar Kumaritashvili.

OlympStats reports that the tragedy of Milne and Kay-Skrzypecki’s deaths hung over the 1964 games. The International Olympic Committee flew the Olympic flag at half-mast throughout that year’s games. And officials attached two black ribbons to the bottom edge of the flag in memory of the two Olympic athletes.

Next: Other Olympic athletes challenged the official account of this skier’s death.

He died from injuries sustained on the slopes. | Pascal Rondeau/Getty Images

Grunge reports that Swiss speed skater Nicholas Bochatay numbered among the best athletes in his sport at the time of his death at the 1992 Olympics in France. Bochatay and teammate Pierre-Yves Jorand took to the slopes to warm up. Both jumped over a hill. Jorand cleared it. But Bochatay hit a Sno-Cat that had been parked on the other side of the hill, hidden from view.

Bochatay died almost immediately. Grunge reports, “There were conflicting reports about what happened, and it was originally stated the Sno-Cat was moving uphill, toward the skiers, with safety lights flashing.” But Bochatay’s teammates later challenged the story, saying that the vehicle was parked and hidden. One of the Olympic athletes lined up to go down the hill after Bochatay said that “as soon as people at the bottom of the hill saw what was happening they signaled for everyone to stop — but it was too late.”

Next: This athlete died recently competing in luge.

Paramedics were unable to save the athlete. | Richard Heathcote/Getty Images

Time reports that Georgian luger Nodar Kumaritashvili died before the Opening Ceremony in Vancouver after he lost control of his sled on a training run. Grunge notes that the athlete was approaching the end of the 4,500-foot track and was launched off his sled, going 88 mph. He ultimately hit a steel pole beside the track. Grunge notes that paramedics arrived quickly, but Kumaritashvili died in the hospital shortly thereafter.

Time reports that after the accident, officials raised the wall and altered the ice profile of the track. Olympic athletes competing in luge also get more training runs, in order to get a better feel for the track, after Kumaritashvili’s death.