Banned in America: You Can’t Get These Vanity License Plates in Many States

Just because you must pay for a vanity plate doesn’t mean you get to brand your car’s bumper with whatever phrase you want. Each state has their own cumulative list of banned license plates the DMV just won’t approve. Hundreds of proposed tags are rejected for sexual connotations, racism, and objectionable language. Just as many are turned down for bad taste and suggestive implications. Let’s say this: if you can’t say it to your grandma, you can’t send it to the DMV.

The text ILUVTOFU was rejected due to a misinterpretation in Tennessee. No, it wasn’t meant to be vulgar, but rather a request stemming from a PETA employee’s love of tofu.

America is pretty creative when it comes to concocting original vanity plates for their bumpers. Whether you’re in the market for a new plate yourself or you just need a laugh, a quick scroll through your own state’s list is worth a chuckle or two or three. We’ve rounded up a list of our favorite banned license plates from all over the country. Here are 10 hilarious examples of vanity plates that caused states to take a stand. 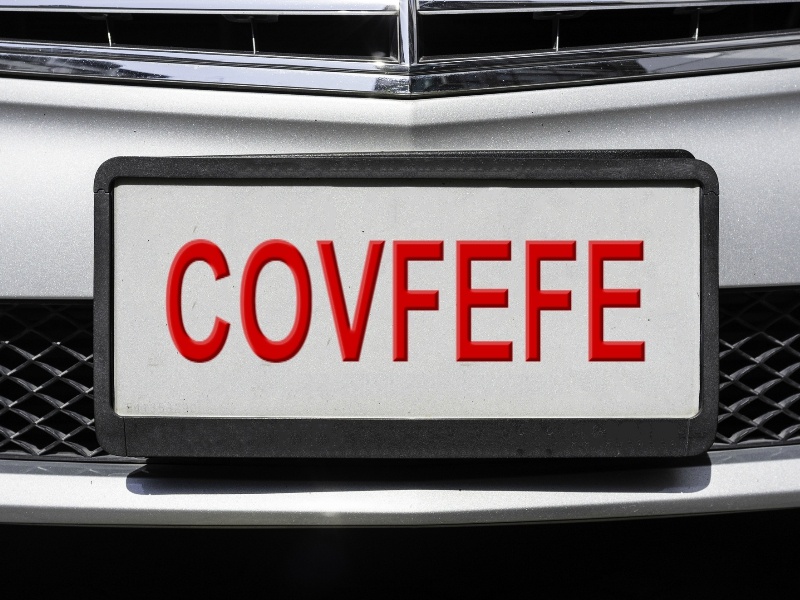 They cracked down on that right away. | pakornkrit/iStock/Getty Images (Illustration image: Nicole Moore/The Cheat Sheet)

We begin our list with a random, recently banned license plate. Believe it or not, Georgia had to forbid “covfefe” from being printed on the state’s vanity license plates after President Trump’s infamously misspelled tweet. In addition the 8,000 phrases they refuse already, Georgia announced the term, as well as any other variation of the word, are permanently banned from its vanity plates.

Next: A plate that’s obviously heading for the “no” pile.

2. ILUVGUNS and any other entries promoting violence 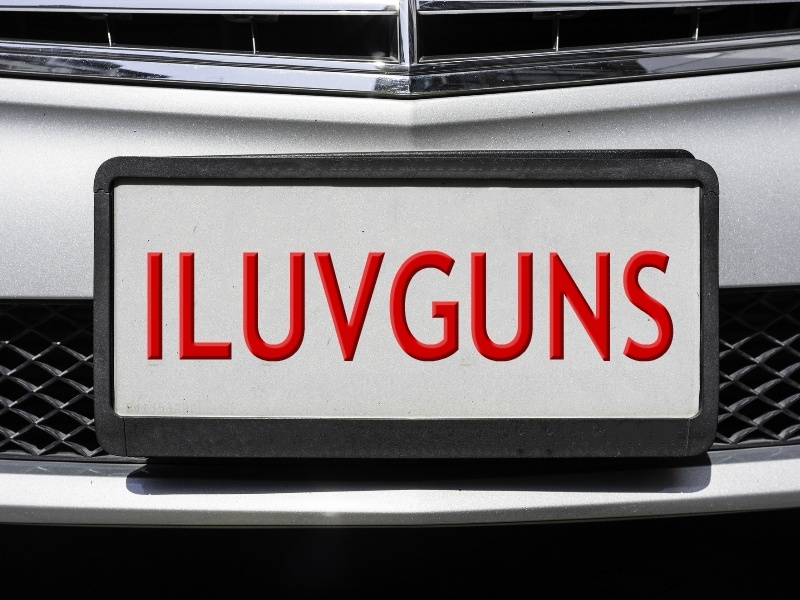 It’s safe to say that now is not the time for a gun-related vanity license plate. Given the recent debate surrounding gun laws and violence, you can bet that DMVs nationwide will reject any similar plates. For example, Florida passed on HASAGUN and GANGMBR — for obvious reasons.

Next: Banned license plates for women

3. ESTROGN and other plate that might make people uncomfortable 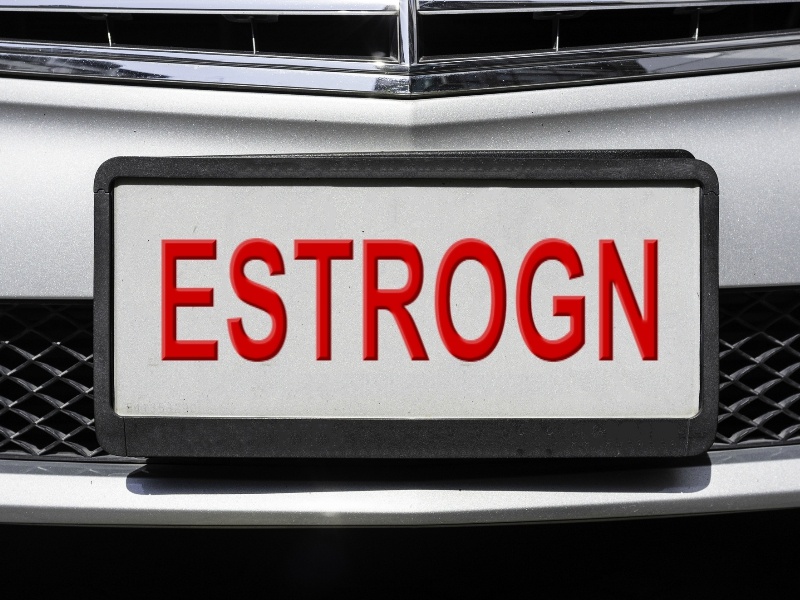 Plates that would make other drivers uncomfortable are also prohibited in many states across America. Illinois felt ESTROGN, short for “estrogen,” was taking it a bit too far for a vanity plate. PMS MOM is a no-go. And although sneaky, so is BQQBS.

Next: NOUCANT use these tag ideas

4. OMG GO and most other abbreviated “text speak” 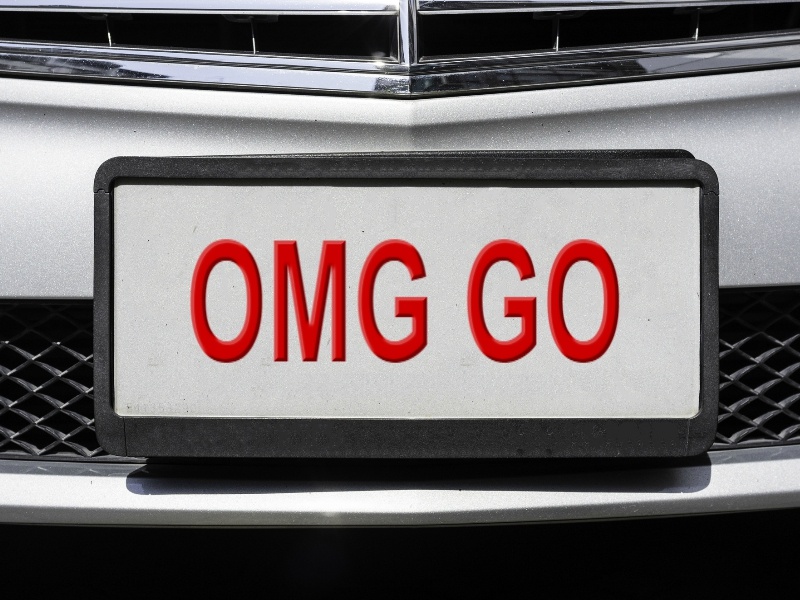 Text speak gets a no from the DMV. | pakornkrit/iStock/Getty Images (Illustration image: Nicole Moore/The Cheat Sheet)

Text speak won’t stump license plate reviewers. Most tags that try to intermix “OMG” “UR”, “2U” with another slightly suggestive phrase on the sly will get caught.

Shout out to Florida employees who nixed the request for an “OMG GO” license plate. Given the number of snowbirds hogging up the interstate there, it seems only natural someone would attempt to engrave their road rage onto a license plate. Other mildly aggressive phrases like URUGLY got the red stamp in New York, too.

Next: Deception will get you nowhere

5. POL1C3 and other fraudulent plates 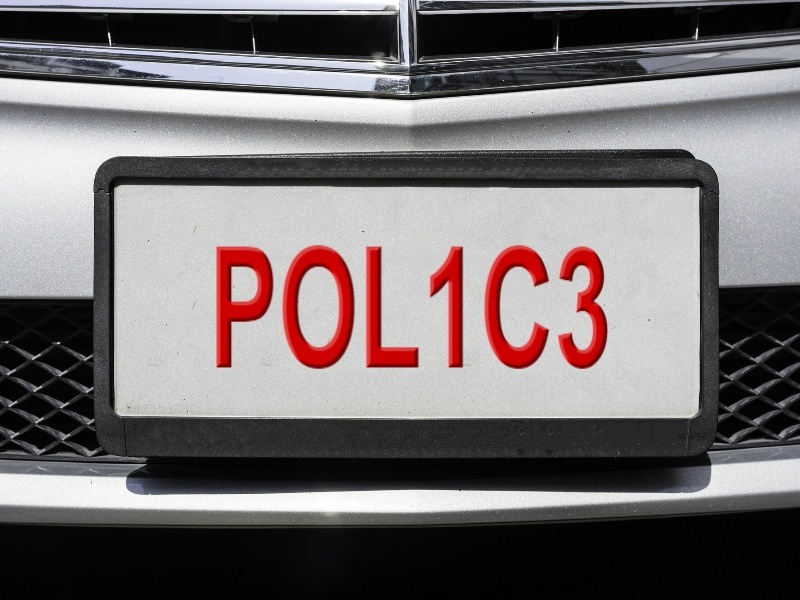 Maryland has a list of over 5,000 banned license plate combinations, thanks to drivers who’ve tried to push the envelope. Among them are plates that carry a “fraudulent or deceptive purpose” such as FBICAR, CIA, MAYOR, or POL1C3. But nearly every state will ban these impersonation entries that would make it difficult for real law enforcement officers to safely patrol the streets.

Next: Another obvious banned license plate

6. JIHAD and other terrorist-related references 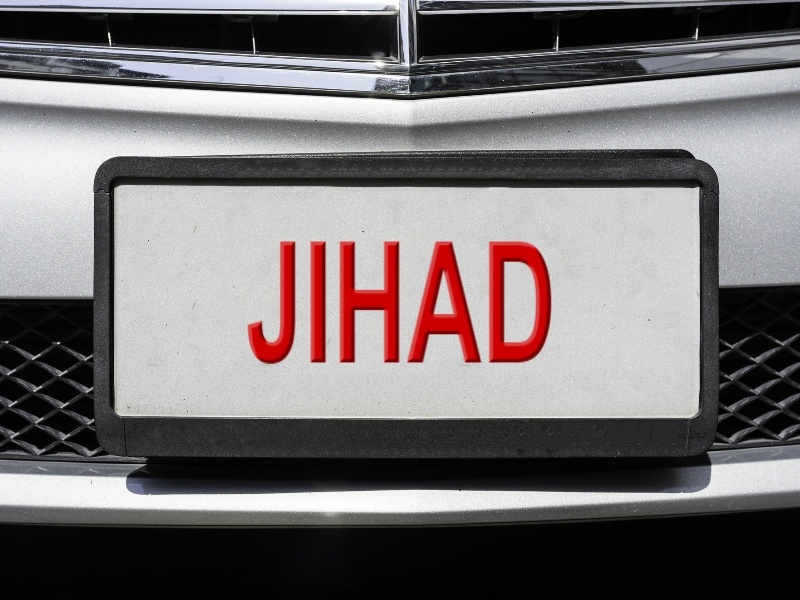 The real issue here is why someone ever thought they’d get such a pointed plate approved in any of the 50 U.S. states. Many states have placed recent limitations on extremist plates. For example, Ohio has a strict policy against ISIS-related requests, as do most other states.

It’s not likely you’ll get away with anything hate-related, either. Arizona threw the IH8U submission and every other similar version of this plate in the trash.

Next: Florida has a pretty hilarious list of tag rejects

7. GOLF HOE and other sexual innuendos 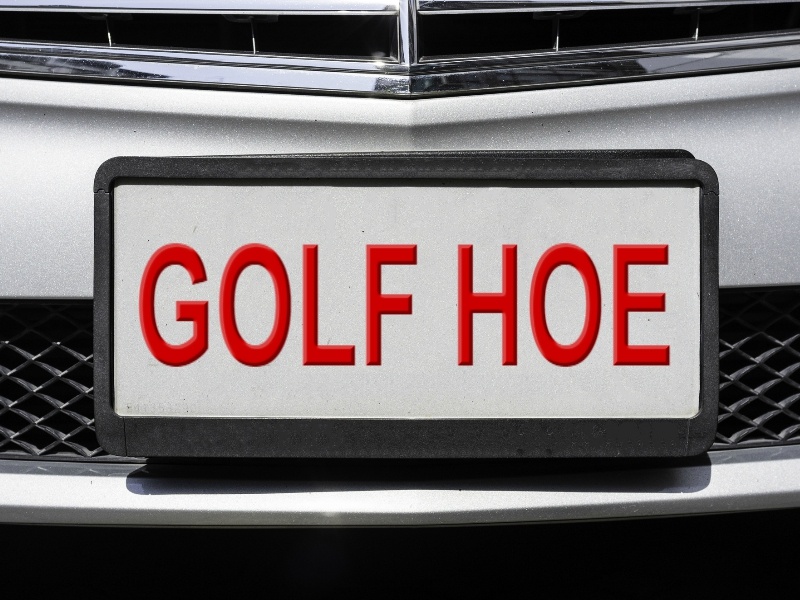 Sure, people in the Sunshine State enjoy golf. But DMV agents in Florida — as well as agents in almost every other state — will reject vanity plates advertising HOE, LAY, or any other sexual reference from the roads. The Sun Sentential reported Florida DMV employees have also vetoed EZ LAY, EL PIMPI, and 1BIG HOE in the past.

Next: A clever trick that won’t work.

8. O HAIL NO and other cleverly disguised curse words 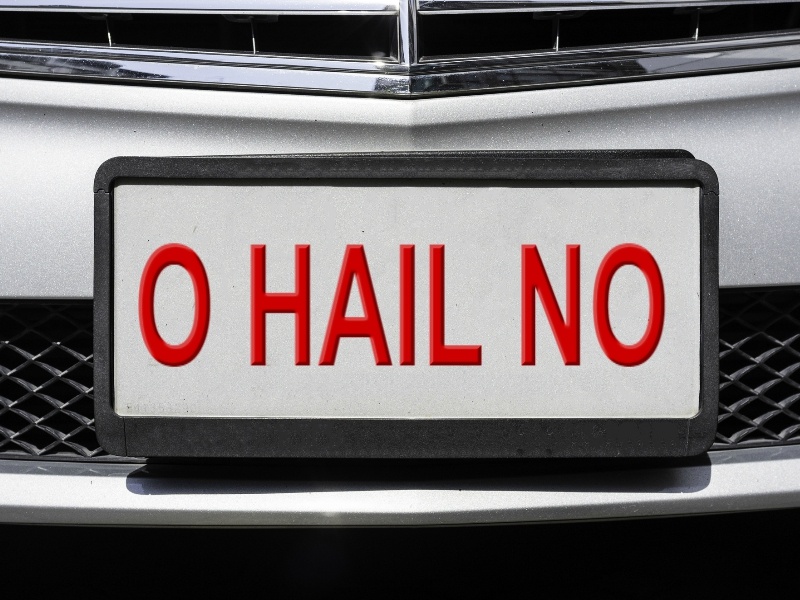 Tags that reference a curse word is out, no matter how clever you think you are. Ohio seems to deal with a lot of “O-H” play-on-words like O HAIL NO and OHOTDAM.

Maryland will pass on profanity plates like DAAAMN, and AWCRAP will get the ax in Idaho. You may feel like you’re a “BADAZZ”, but it’ll have to become a tattoo because that phrase will never make it on your license plate.

Next: Your affection for alcohol doesn’t belong on your car’s bumper.

9. W1NO and other boozy tags 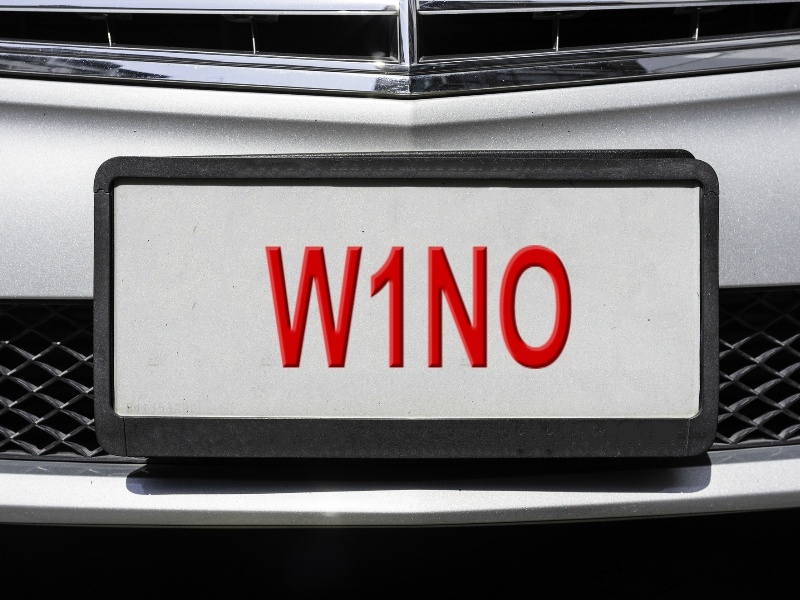 Reviewers also passed on plates like STONED and IM DRUNK in New York. Of course, almost every state flat-out forbids the obvious one: ALCOHOL.

10. LUCIFER and other pop culture references 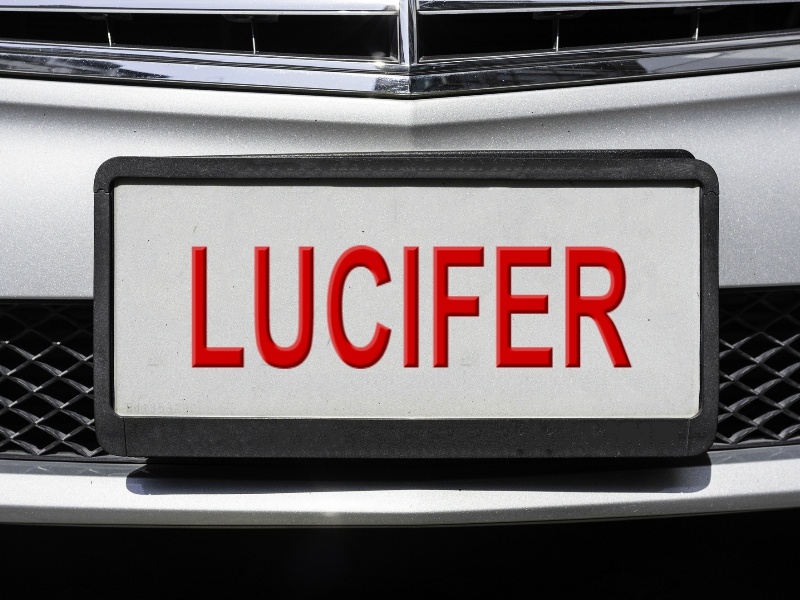 More pop culture references are likely to get axed by most state’s DMV license plate reviewers than approved. Maryland rejected violent references such as LUCIFER and KILLBIL for reasons much like the ones above.

But even seemingly harmless references like JAYLENO, for instance, were dismissed in New York state. GIGGIDY, a favored phrase from the politically incorrect Family Guy character, has been disallowed in New Jersey, as well.