Trying to muster the energy to craft a creative meal at the end of a long day isn’t in the cards for most people when takeout and premade foods are so readily available. Even if you’re trying to make smart choices when ordering, it’s easy to end up with foods that are far less healthy than you hoped.

The best way to fight back against fat- and calorie-laden fare is to build a roster of nutritious meals you can prepare on autopilot. These seven recipes are especially good because you can vary them in numerous ways by choosing different proteins and veggies. So put down the phone, head to the kitchen, and get cooking.

Once you’ve mastered some basic egg cookery, it’s easy to fall into the habit of making the same preparation each time. Give your breakfast a little more excitement and a lot more flavor with Southern Living’s spinach-packed omelet. It’s a great sit-down meal with a side of toast, but you can also turn it into an on-the-go breakfast by wrapping everything in a whole-grain tortilla.

Directions: Combine eggs with 2 tablespoons water in a blender and blend until well combined. Melt butter in an 8-inch nonstick skillet over medium heat. Add spinach and tomatoes and cook until spinach wilts, about 1 minute.

Add salt and eggs to skillet. Cook, gently lifting edge of omelet and tilting pan to allow uncooked egg to flow underneath cooked portion until nearly set, about 1 minute. Cover skillet and cook for 1 minute.

Sprinkle cheese and pepper over omelet, fold in half, allowing cheese to melt, then slide onto a serving plate. Season with additional salt and pepper and serve.

Ordering steak from a restaurant more than a few times per month can easily make your food bill soar. You can afford to down the protein a lot more often if you cook it at home. You’ll also be eating healthier since many eateries baste their steaks with butter while they cook.

For an easy way to make steak a weeknight-friendly meal, try an entrée salad. One of our favorites is Today’s recipe with spinach, grapes, and blue cheese. It’s sweet, savory, and surprisingly satisfying.

Directions: Add steak and half of vinegar to a zip-top bag along with broth, sliced garlic, and a pinch each of salt and pepper. Close top, squeezing out as much air as possible, and massage gently. Refrigerate for 4 to 12 hours.

Shake remaining dressing, minced garlic, a pinch each of salt and pepper, and olive oil to a jar with a lid. Cover and refrigerate until ready to use.

Whisk vinegar and sugar until sugar dissolves, add onions, and press to submerge. Cover and refrigerate until ready to use, at least 1 hour and up to 1 week.

Remove steak from marinade and pat dry, removing pieces of garlic. Heat a large, heavy pan over medium-high heat. Add vegetable oil. Add steak and cook, flipping once, for about 5 minutes per side, or until an instant-read thermometer registers 140 degrees Fahrenheit for medium rare.

Let steak rest for 5 minutes. Toss greens, cheese, and grapes and divide among 4 plates. Slice steak and add to plates along with a drizzle of dressing and some pickled onions. Serve with bread. 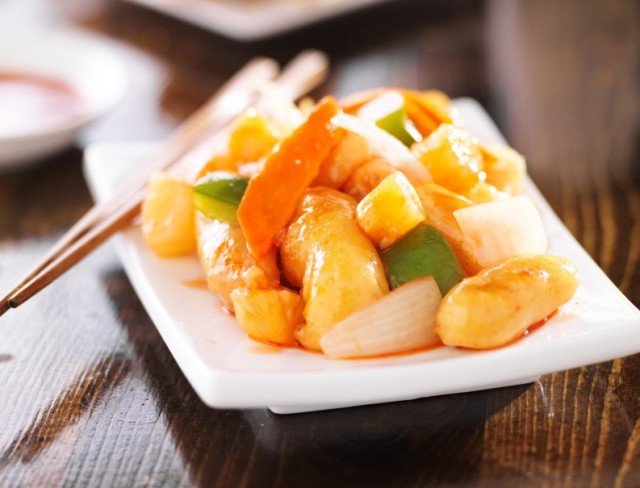 Chinese takeout is a staple for anyone with a busy life. As delicious as those dishes are, they aren’t doing your health any favors. One order of sweet and sour chicken from P.F. Chang’s, for instance, contains 830 calories, 31 grams of fat, and 69 grams of sugar. That doesn’t even include rice.

Instead of ordering such a sugar bomb from the nearest restaurant, make a healthier version in your own kitchen with Eating Well’s pineapple-studded pork stir-fry. Feel free to add any of your favorite veggies to the dish for an easy way to bulk it up and boost your fiber intake.

Heat a 14-inch wok or other heavy skillet over high heat until a drop of water evaporates in 1 to 2 seconds. Swirl in 1 tablespoon peanut oil. Add pork in one layer and cook for 1½ minutes, letting sear. Using a metal spatula, stir-fry until lightly browned, but not cooked through, about 1 minute longer. Transfer to a plate.

One of the most delicious ways to get more brain-boosting, heart-healthy fish in your diet is by grilling a few fillets, then tucking them into some tortillas. It’s decidedly healthier than fried preparations and even easier to make. Try the method with Cooking Classy’s zesty tacos, inspired from a recipe on Chowhound. You’ll be sitting down to a seafood feast in under 30 minutes.

Directions: Add cabbage, red onion, and cilantro to a medium bowl. Toss to combine. Add 1½ tablespoons lime juice and 1 tablespoon oil. Season with salt and pepper and toss to combine. Set aside until ready to use.

In a mixing bowl, whisk 2 tablespoons oil, 1½ tablespoons lime juice, garlic, chili powder, cumin, paprika, and cayenne. Season with salt and pepper and whisk to combine. Add mixture to a large, zip-top bag along with fish. Let marinate for 20 to 30 minutes.

Preheat grill to medium-high heat. Brush grates lightly with oil. Cook fish, flipping once, until cooked through, about 3 minutes per side. Transfer to a plate, then flake into bite-size pieces. Serve fish with tortillas, toppings, and slaw.

5. Quinoa and Rice Bowl with Kale, Kimchi, and Egg

Everyone should have a standard formula for building a grain bowl because you can endlessly riff on them to use up almost anything you have sitting in your fridge. The New York Times’s Asian-inspired recipe with quinoa and brown rice is one of our favorites. It’s just as delicious cold as it is hot, which makes it a great option to pack for lunch.

Directions: Bring a large pot of salted water to a boil and add rice. Cook for 30 minutes, then drain. Return rice to pot, cover with lid, and let rest for 10 minutes. Meanwhile, bring 2 cup salted water to a boil in a small pot and add quinoa. Cover and let simmer over low heat for 15 minutes. Turn off heat and let rest, covered, for 5 minutes. Fluff rice and quinoa with a fork.

In a small bowl, whisk together soy sauce, ginger, and vinegar. Season with salt, then whisk in both oils.

Meanwhile, bring a medium pot filled with water to a boil. Carefully add eggs and boil for 6 minutes. Transfer eggs to ice water and let cool. Peel and cut in half.

Finding meatless recipes that are substantial enough to satisfy a growling belly can be a challenge for guys who typically reach for meat. Black bean burgers are one of the rare vegetarian meals that manage to do it thanks to plenty of satisfying protein and fiber. Try Epicurious’s meatless burgers. The recipe keeps ingredients to a minimum and still manages to deliver a serious amount of flavor. We like to top these patties with jack cheese, salsa, and avocado.

Directions: Pulse half of beans in food processor along with mayonnaise, breadcrumbs, cumin, oregano, and cayenne until coarsely puréed. Transfer to a bowl and stir in cilantro and remaining beans. Shape into four even patties.

Heat a 12-inch skillet set over meidum-high heat. Cook patties until crisp and lightly browned on both sides, about 5 minutes total. Serve on buns.

Don’t be fooled by the fancy name; a paillard is nothing more than a piece of chicken breast that’s been pounded into a thin cutlet. We like Bobby Flay’s lemony version because it becomes a complete meal simply by adding a quick arugula and tomato salad. You can also substitute any seasonal produce in place of the tomatoes. Try shaved root vegetables, fresh corn kernels, or even berries.

Preheat grill to high. Remove chicken from marinade, season with salt on both sides and grill for 2 to 3 minutes per side or until browned and just cooked through.

Combine arugula, tomatoes, and onions in a large bowl. Toss with vinegar and oil and season with salt and pepper. Place each paillard on a large plate, drizzle with olive oil and top with salad. Garnish with lemon halves and serve.