The truly good appetizers cost a lot more, and most of us are willing to pay a high price for a flavor-packed bowl of steamed mussels. But why? Mussels are shockingly easy to make at home and one of the biggest bargains at the seafood counter. In that spirit, you may as well take the whole happy hour home. You can linger as long as you want, avoid the mark-up on booze, and impress your friends with some wicked kitchen skills by making a simple seafood dish. 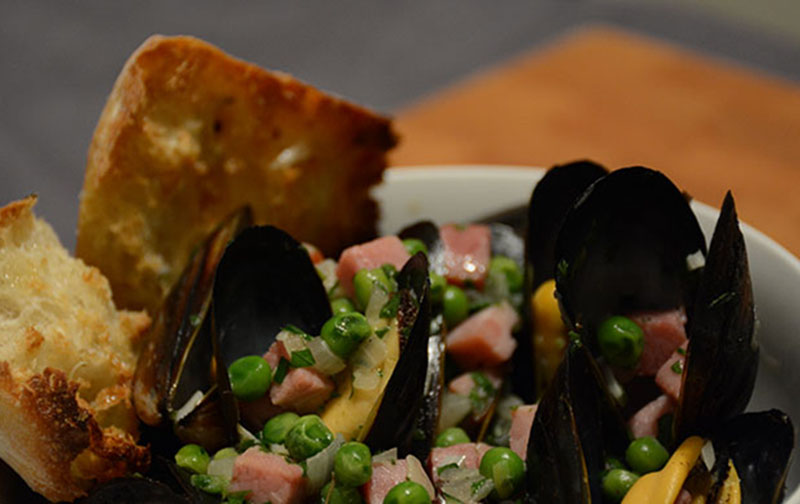 Recipes for mussels typically look to Belgium, where they’re often steamed in beer and served with fries, or France, where they’re typically cooked in wine and just as likely to be served with bread as the crispy potatoes. This recipe splits the difference to give you maximum flavor with minimum effort. Fries might be a tasty accompaniment, but they require a completely separate process. Serving with bread is the clear winner. It actually might even be a better choice, since it really soaks up all the tasty juices.

As for the other ingredients, we’re after flavor without fuss. Ham is fully cooked, so it can go right into the pot along with some shallots. Garlic adds its unmistakably pungent flavor, but you can leave it out if you’re not a fan. Next, dump in an entire bottle of beer. We went with a Belgian-style brew, but anything light will work. Just avoid beers that are too heavy or bitter, because you’ll obliterate the flavor of the seafood. Add your cleaned mussels, cook, then take them out of the pot. Stir in some peas for a pop of sweetness, a little bit of crème fraîche, and some herbs, then dump the broth over your shellfish. That’s all there is to it.

Variations are pretty much endless. Bacon fanatics can sub their favorite cured pork product for the ham, but you’ll need to let it render until it’s almost cooked before adding the shallots. You can also try corn instead of peas. If you want to make it spicy, add some sliced jalapeño or a pinch of cayenne. Once you have the basic method, you can make this dish work with any type of cuisine.

A proper pairing can make a good dish taste even better, so give a bit of thought to your beverages before you mix your go-to cocktail or grab your usual IPA. In this case, the dish can be your guide. Whatever beer you used to cook the mussels will go perfectly with the finished product, and you probably already have five extra bottles on hand. Cheers to a great at-home happy hour.

Beer-Steamed Mussels with Ham and Peas 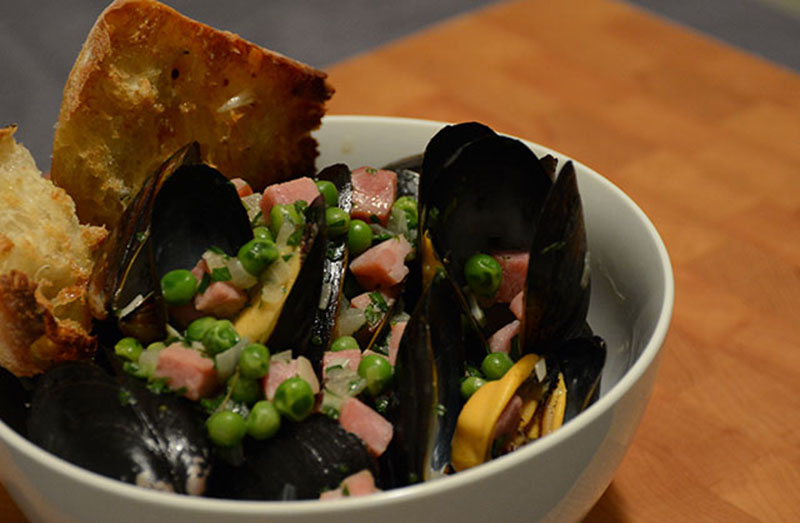 This recipe will feed two people as a main dish, but it’s more than enough for four as a snack. Don’t skip the bread, because it’s like a flavor sponge for the broth.

Directions: Heat oil in a large heavy pot over medium heat. Add shallots, ham, and a pinch of salt. Cook, stirring occasionally, until shallots have softened and ham has given up some of its juices, 4 to 5 minutes. Add garlic and cook until fragrant, about 1 minute. Add beer, bring to a simmer, then add mussels. Cover and simmer until mussels have opened, about 5 to 7 minutes.

Using a slotted spoon, remove mussels to a large bowl or plate. Stir peas and crème fraîche into broth, and simmer just until heated through. Season with salt, to taste. Stir in herbs, then pour over mussels. Serve with toasted bread.