The Best Cheeseburgers in America Are Found in These 15 States

When it comes to American cuisine, the cheeseburger is indispensable. The ingenuity the United States is famous for comes through in the humble cheeseburger. The ground beef, bun, and endless toppings allow for an unparalleled amount of creativity.

Some chain restaurants are helping to spread quality options throughout the country, but they just scratch the surface when it comes to finding a quality burger. Here are the 15 states with the best cheeseburgers — and the restaurants where the cheeseburgers are not to be missed.

Burger lovers who find themselves in the Golden State can hug the coast in order to find some of the best in the United States. Hodad’s in San Diego, Petit Trois in Los Angeles, and WesBurber ‘n’ More in San Francisco all get nods from Zagat as great places to chow down on some of the country’s best burgers. A-Frame and Father’s Office in Los Angeles and Mission Bowling in San Francisco also make the list of must-try burgers in California. 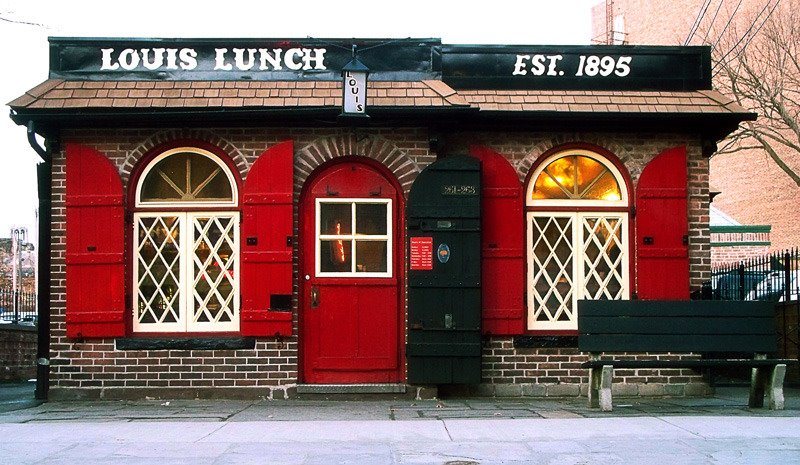 This was the first place to serve burgers to the public. | Louis’ Lunch via Facebook

If cheeseburgers are the quintessential American tradition, then you can’t miss Connecticut. The Library of Congress recognizes Louis’ Lunch in New Haven as the first spot in the country to serve hamburgers to the public. Ted’s Restaurant outside Hartford dishes up steamed burgers that are a regional specialty and a local favorite. 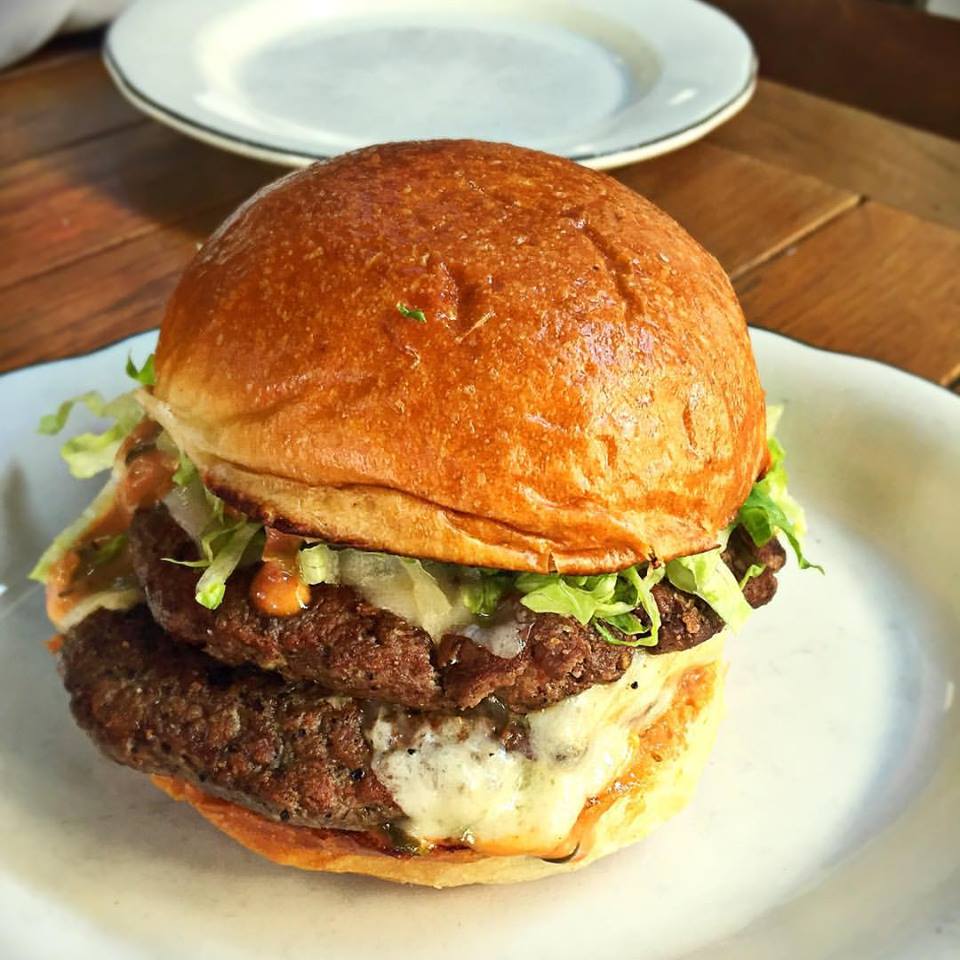 Kush near Miami Beach is among the best burger joints in the country, according to Zagat, and its Johnny Utah has been voted the best in Miami. A little over a mile away, Michael’s Genuine Food & Drink offers burgers and more created by multiple James Beard Award-winning chef Michael Schwartz. Those two restaurants alone make Florida a destination for those in search of a great burger. 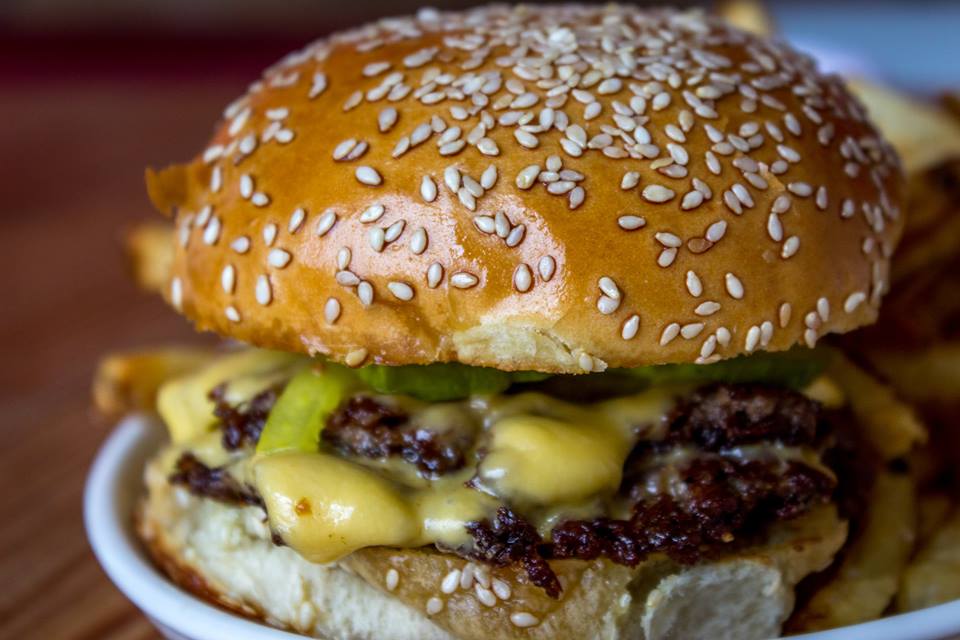 It also opened a burger-only restaurant. | Bocado Atlanta via Facebook

Bocado and Holeman and Finch are a little less than 3 miles apart north of Atlanta. And they offer some of the best burgers in the United States. Bocado’s burgers have proven to be so in demand that it opened up the burger-only Bocado Burger in Alpharetta. Holeman and Finch serves only a limited number of burgers at lunch and dinner, though they are available throughout the day at the Ponce City Market closer to downtown Atlanta. Farm Burger has three Georgia locations (Buckhead, Decatur, and Dunwoody) serving its delectable burgers. 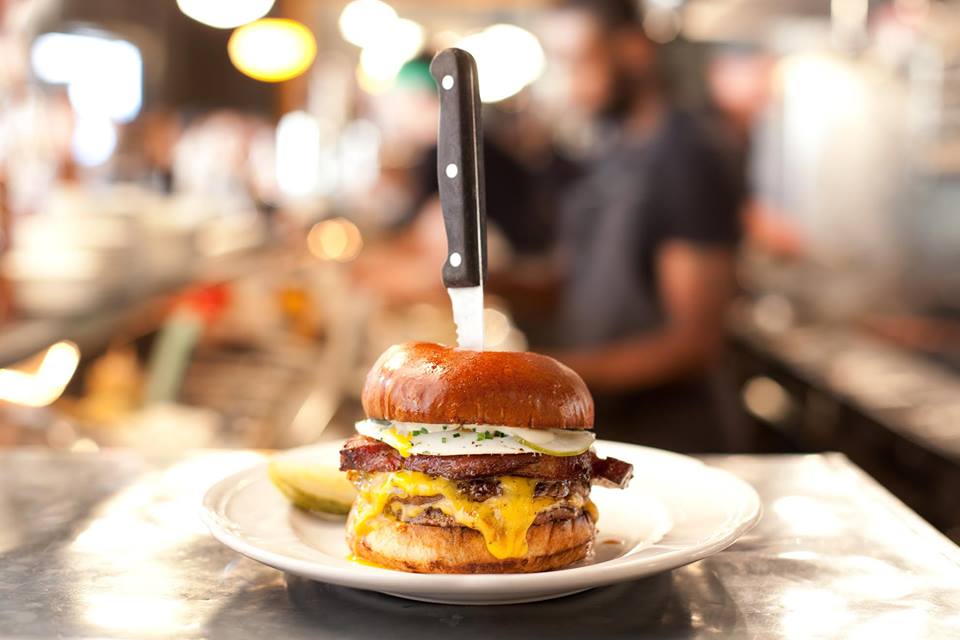 Chicago was named the 2017 restaurant city of the year. | Au Cheval via Facebook

Chicago earned the designation as Bon Appétit magazine’s Restaurant City of the Year for 2017. In addition to staples, such as deep dish pizza and Chicago-style hot dogs, some of the best cheeseburgers can be found in the Windy City. Au Cheval and sister restaurant Small Cheval are renowned for their simple yet exquisite burgers. Zagat credits the original Kuma’s Corner with igniting Chicago’s burger boom. Owen & Engine and Primehouse also feature can’t-miss cheeseburgers in Chicago’s city limits. 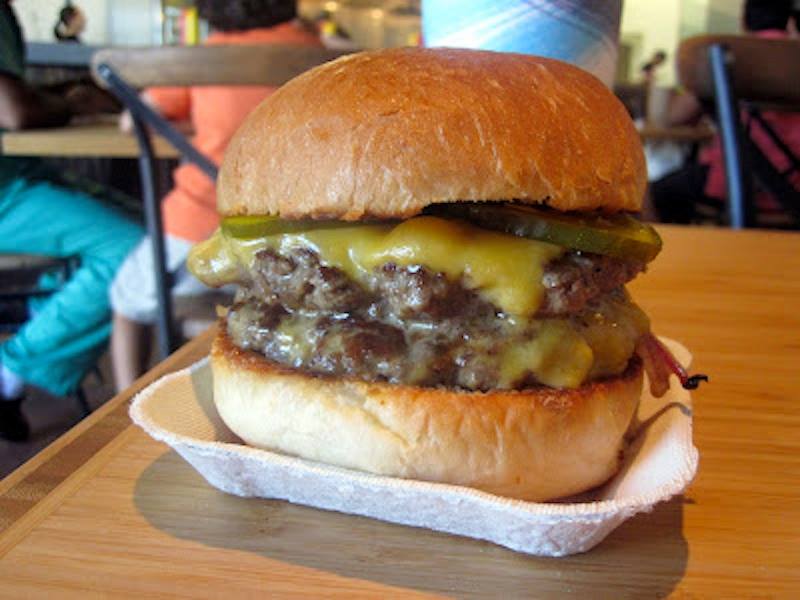 Its burgers have won awards. | The Company Burger via Facebook

Though Louisiana is known for its Cajun-style cooking, three restaurants in New Orleans make the state a hot spot for burger lovers. The two locations of The Company Burger are recent additions but have won a slew of awards, including New Orleans’ best burger in 2016. Port of Call in the French Quarter is a family-friendly spot. La Petite Grocery offers succulent burgers served up by James Beard Award 2016 Best Chef-South award winner Justin Devillier. 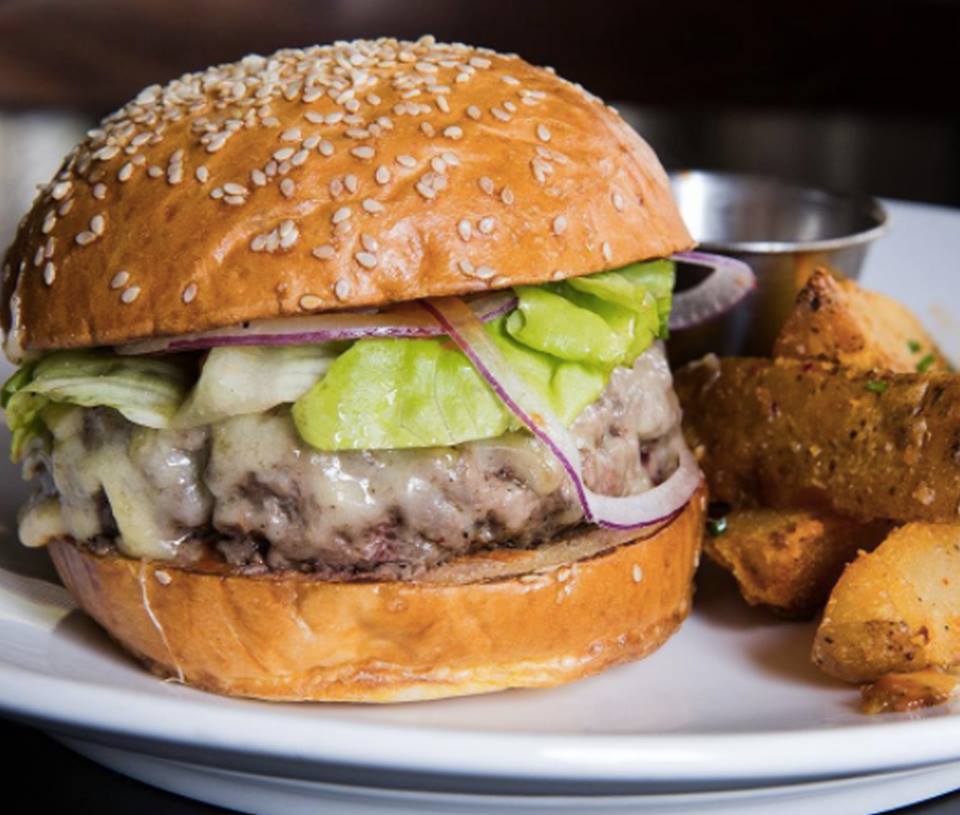 You have to snag one before they run out. | Craigie On Main/Tasting Table via Facebook

A pair of spots in Cambridge just across the Charles River from Boston have some of the best burgers around. James Beard Award winner Tony Maws serves up fine French-style fare at Craigie on Main, but the burger has been named one of the best in Boston. The cheeseburger at Craigie on Main is not on the menu and is available to the lucky few able to snag one before the ingredients run out. The burger at Green Street is the cheapest offering on the dinner menu, but it’s one of the best out there, according to Food & Wine.

#cheers @burger When it's your last night in NYC, you go big and get the black label # at @minettatavernny. @infatuation_nyc #burger #EEEEEATS

Thanks to a slew of cheeseburger destinations strewn across New York City, the state is a burger lover’s paradise. Michelin- and Zagat-rated Peter Luger Steak House has half-pound burgers for those who can get there before the dinner hour. Minetta Tavern in Greenwich Village and Lure Fishbar in Lower Manhattan are also known as two of the best in the city. Bowery Meat Company, Brindle Room, EMILY, and The Spotted Pig extend the list of burger hot spots in the Big Apple. 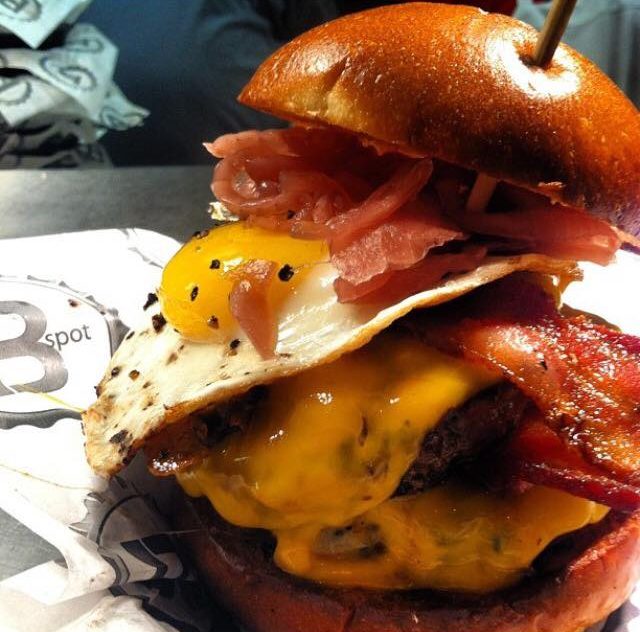 This burger joint has its own celebrity chef. | B-Spot Burgers via Facebook

Celebrity chef Michael Symon is the man behind B-Spot Burgers, which has a trio of locations around Cleveland, plus others in Columbus, Ohio; Detroit; and Indianapolis. The restaurant’s Lola burger is one of the best around, according to Food & Wine. Also, Kewpee Hamburgers has been serving devout locals for close to 100 years at three Lima locations. 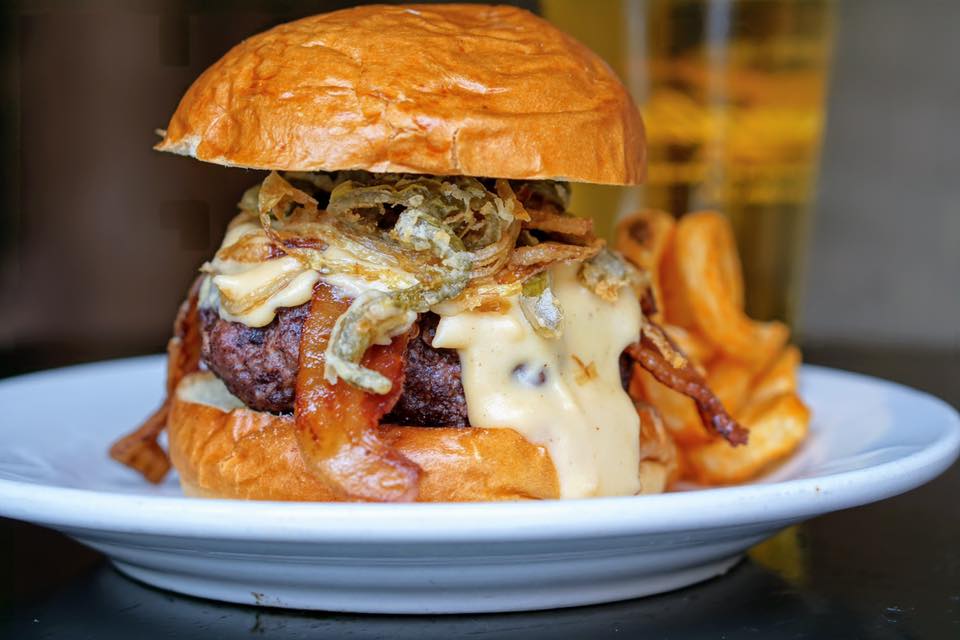 It does burgers as good as its cheesesteaks. | Nick’s Bar and Grille via Facebook

With Philadelphia as the backbone, Pennsylvania gets some high marks when it comes to serving up some of the country’s best cheeseburgers. Philadelphia built its culinary fame on the cheesesteak, but Nick’s Roast Beef Bar & Grill and Village Whiskey ensure the cheeseburgers are worth sampling. Stinky’s Bar & Grill in Pittsburgh also gets high marks. A few other Philly joints, including Fountain Porter, The Pub on Passyunk East, and Sketch Burger, are havens for burger lovers. 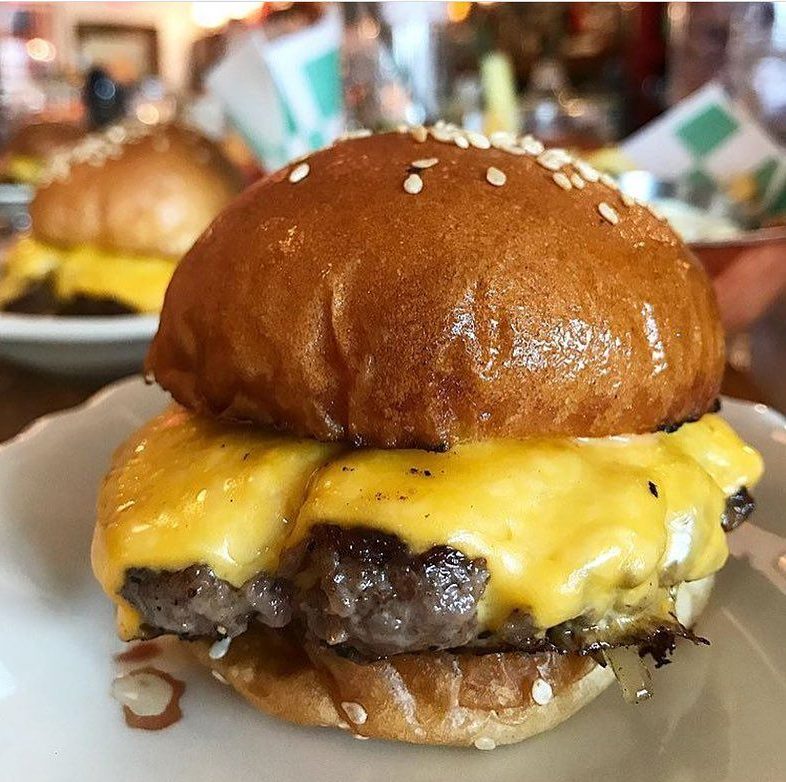 Point your car in the direction of Charleston for some of the best burgers in South Carolina. The simple cheeseburger at Little Jack’s Tavern gets high marks from Zagat and Thrillist. The burger at The Macintosh, less than a mile from Little Jack’s, earns raves from Southern Living for its simplicity. H&R Sweet Shop in nearby Mount Pleasant offers great cheeseburgers in its dive bar setting. 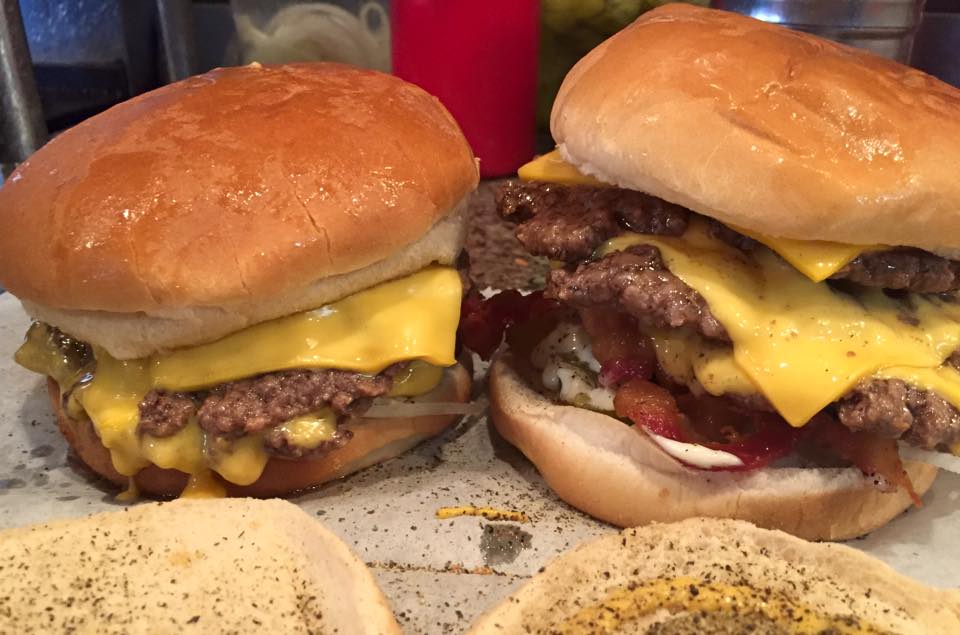 It has been in business for over 100 years. | Dyer’s Burgers via Facebook

The thin patties at Dyer’s Burgers, right off Beale Street in Memphis, are well-known thanks to the establishment being in business for more than 100 years. Also in Memphis, Hog & Hominy serves up its John T. Burger with grilled onions mixed into the patty. Husk in Nashville, run by award-winning head chef Sean Brock, sometimes offers a cheeseburger on its rotating menu. When available, it is one burger lovers must seek out. 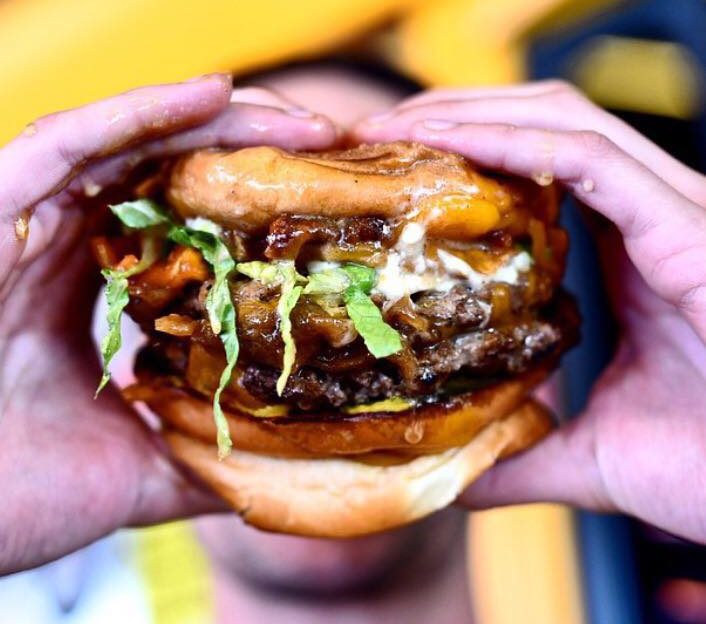 This burger is a mouthful. | Bernie’s Burger Bus via Facebook

Is it any surprise that a state known for its namesake longhorn cattle has some of the best cheeseburgers in the land? Bernie’s Burger Bus, Dugg Burger, Hopdoddy, and Perini Ranch Steakhouse (in Buffalo Gap, about 200 miles from Dallas) offer top-notch burgers on a regular basis. The cheeseburger at Grape Restaurant in Dallas cracks the Zagat list of 30 best burgers and is available just two days a week.

No better way to spend Sunday than with a Burger Americain and on the sunny sidewalk café {:@dcfoodporn : @chefmikeabt }

The nation’s capital is only a little over 68 square miles, but some of the country’s best burgers are within its borders. Le Diplomate and Ray’s Hell Burger are both touted as must-have burgers by Zagat and Thrillist. Central Michel Richard’s bacon cheddar cheeseburger includes crisp potato wafers on top for an interesting texture.

The Trempealeau Hotel along the banks of the Mississippi River offers farm-fresh ingredients and even has a vegetarian walnut burger on the menu. Yet Milwaukee is the headquarters of Wisconsin’s must-taste burgers. Less than 3 miles apart on Port Washington Road, Kopp’s and Solly’s offer two of the best cheeseburgers in Wisconsin. You can order them without cheese, but you might get some strange looks in America’s Dairyland. Nite Owl in south Milwaukee keeps it simple (single or double cheeseburgers) and gets rave reviews on Yelp.