Best Gazpacho Ever: The Only Gazpacho Recipe You’ll Ever Need 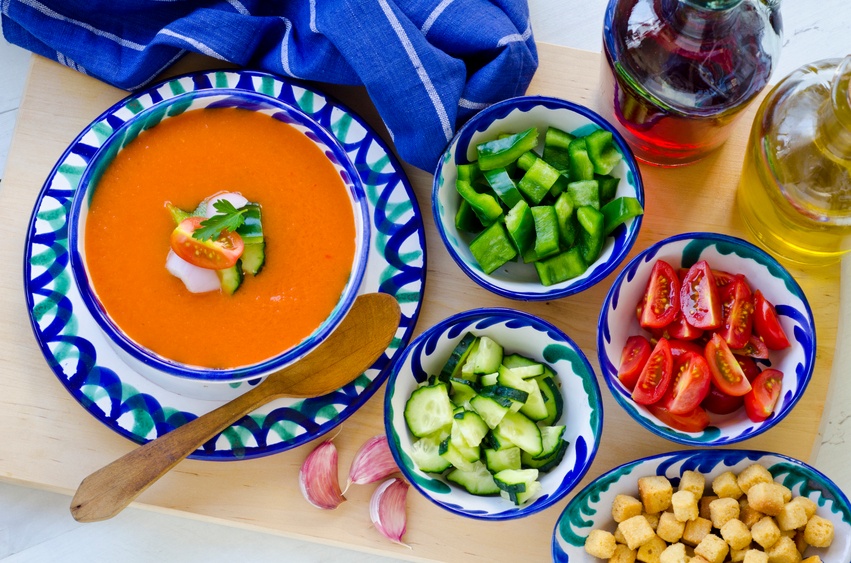 On a hot summer’s day, nothing quite hits the spot like a bowl of cool gazpacho. This cold soup is a classic Andalusian dish, traditionally made with a mix of tomatoes, cucumber, onion, pepper, bread, and olive oil. It’s the latter two ingredients that separate a gazpacho recipe from one for salsa. In fact, the gazpacho we see on menus today started out as a bread and olive oil soup — the famous tomatoes came later.

Gazpacho is a simple dish, but that doesn’t mean everyone agrees on how to prepare it. Quick-and-easy versions call for tossing everything in a blender and processing until smooth, while others instruct cooks to finely dice the veggies. Some chefs suggest grilling the vegetables to bring out their flavor, and others skip the bread. You’ll find chunkier versions of gazpacho as well as those made with almonds, black olives, or lobster. White gazpacho omits the tomatoes entirely but may include other ingredients like grapes. Then there’s green gazpacho, which might include cucumber, avocado, or fresh herbs.

Getting everyone to agree on the best gazpacho recipe is likely an exercise in futility. We think this version created by J. Kenji López-Alt of Serious Eats is a strong contender, though. True, it’s a bit fussier than the blend-and-chill versions, but taking the time to salt the tomatoes, cucumber, and other fresh ingredients draws out their flavor, while the unusual step of freezing the veggies before adding them to the soup helps break them down and makes for an even tastier finished dish. Straining ensures the soup is smooth as silk, though if you prefer a chunkier version, you can add in some more diced vegetables before serving. 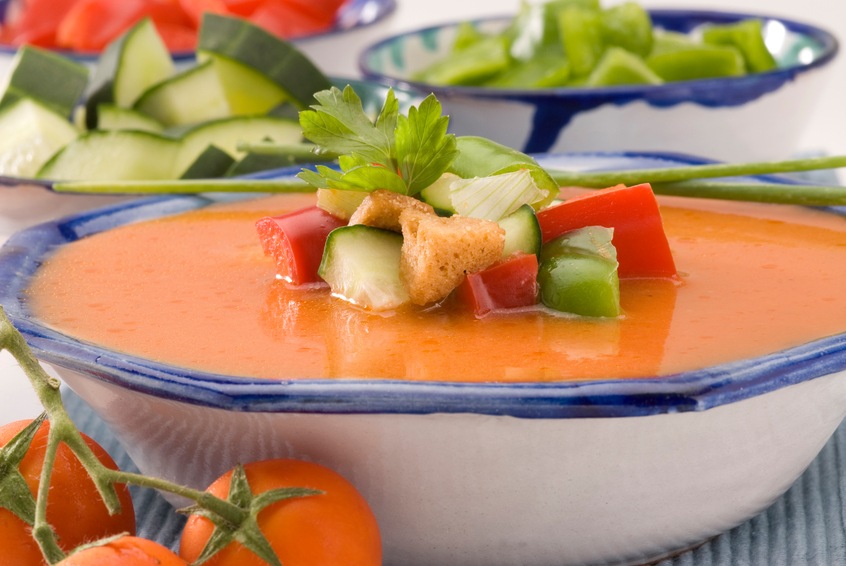 You’ll find a lot of 10-minute gazpacho recipes out there, so the 2 hours it takes to prepare this version from Serious Eats might seem too time-consuming. Most of the time it is hands-off, though, including the 30 minutes the vegetables spend in the freezer before you turn them into a deliciously cold tomato soup.

Directions: Combine tomatoes, cucumber, onion, pepper, garlic, and salt in a large bowl and toss to coat thoroughly. Let sit at room temperature for 30 minutes. Drain juices into a large bowl and add the bread. Transfer the drained vegetables to a rimmed baking sheet and place in freezer until vegetables are frozen, about 30 minutes.

Remove vegetables from freezer and allow to sit at room temperature until mostly thawed, about 30 minutes. Transfer vegetables and all their juices from the pan to bowl with soaked bread.

Working in two batches as necessary, blend vegetables, juice, and bread at high speed, slowly drizzling olive oil and sherry vinegar into blender as it blends. Strain soup through a fine mesh strainer into a large bowl. Season to taste with salt and black pepper. Serve, drizzling each bowl with olive oil, a few sprinkles of sherry vinegar, extra cracked black pepper, and chives. Gazpacho can be stored in an airtight container in the refrigerator for up to 3 days.

Quality ingredients are essential to a good gazpacho. “You really will have to seek out good ingredients to make this worth your while,” said The Guardian’s Felicity Cloake. In other words, don’t try to cut corners with the tomatoes in this recipe. Bland, mealy tomatoes will produce an equally uninspiring soup. If you have just-picked tomatoes from your own garden, now is the time to use them. If not, look for the ripest tomatoes you can find at the store or farmers’ market. They should be dark in color, relatively firm, and have that distinctive tomato-y smell, according to Real Simple. Once you get them home, store them on the counter, not in the fridge.

For the bread, look for something that’s not too flavorful, since you don’t want it to overpower the taste of the soup. Skip the sourdough or seeded breads in favor of plain white Italian or French bread. If you can afford it, buy better-quality olive oil too — you’ll be able to taste the difference in the final result.

Sherry vinegar is traditionally used in gazpacho, but you can also try substituting red wine vinegar, which several commenters on the original recipe said worked well. Just know the flavor will be a bit different. Serious Eats suggests garnishing your soup with cracked black pepper and chives, but some people like to get more creative. Consider mint, parsley, or even cubed ham or chopped hard-boiled egg to finish off the dish.