When it was announced that the Trump administration rolled back restrictions on hunting trophies being imported from Zimbabwe and Zambia, people collectively gasped. The thought is that it will only increase big game hunting for sport and worsen the risk for endangered species. In those two specific cases, that’s probably true.

However, with a few caveats, I’d like to offer you an alternative to that narrative. There is actual data that shows how conservation efforts in some African countries have been able to reverse an endangered species. As counterintuitive as that may sound, keep an open mind. Take a look at what is being done to help save species by hunting them. (It hurts my head to read that as well.)

1. How does big game hunting work?

Let’s say you have some odd reason that you want to go out, pin an animal in the corner of a conservatory and shoot it, you’re going to have to jump through some hoops. This isn’t going to be a cheap trip that everyone can just hop on a plane and go and do. To be able to hunt a big game animal, like maybe a Rhino, you’re going to have to shell out tens of thousands of dollars. That permit once paid for, will provide you a hunting tag that the conservatory provides.

Personally, I’d like to see you spend that money on a shrink to figure out why you have such a serious need to prove your masculinity or why you have such a lack thereof. Hell, you could even buy a high-end sports car for that price to satisfy your mid-life crisis, but I digress.

Next: This is actually a small threat in the big picture.

2. Poaching is a massive threat to these animals

John Pameri, head of the security at the Lewa Wildlife Conservancy in central Kenya, holds a Rhino tusk his team took from a Rhino shot dead by poachers. | ROBERTO SCHMIDT/AFP/Getty Images

Poaching has lead to a lot of these animals being on the endangered species list or at least leading them to a very high risk of being there. It is so prevalent because the demand for things like furs, ivory, and “medicines” is very high. A single Rhino horn can fetch up to 30,000 dollars a pound. Since the demand is so high, protecting these animals is extremely difficult. These poachers are highly funded operations and extremely brutal in their pursuit of their goods and in some cases help support terrorism.

Next: That’s not the only threat to these animals.

3. Loss of habitat is hurting them as well

Farming has the biggest impact on loss of habitat. | Carl De Souza/AFP/Getty Images

Not having a home can really affect your ability to survive. From farming to city growth, the habitat that these animals live in is slowly being eroded. In fact, the International Union of Conservation of Nature (IUCN) lists habitat loss as the greatest threat to most endangered or threatened species. More so than poaching.

Next: How do you combat these two threats!

Now that is a cute Rhino. Don’t you want them to have a home safe from poachers? | Silas Stein/AFP/Getty Images

By creating parks and conservatories where these animals can be protected from poachers and human encroachment, you give these animals a huge advantage in being able to spring back from the endangered or threatened species list. In these parks, there are efforts to have well-trained rangers protecting endangered animals as well as incentive programs to have farmers leave part of their land alone. This is so that the habitat of the animals is not infringed upon and the farmers help protect them from poachers.

Next: This all costs a lot of money.

5. How to pay for these efforts 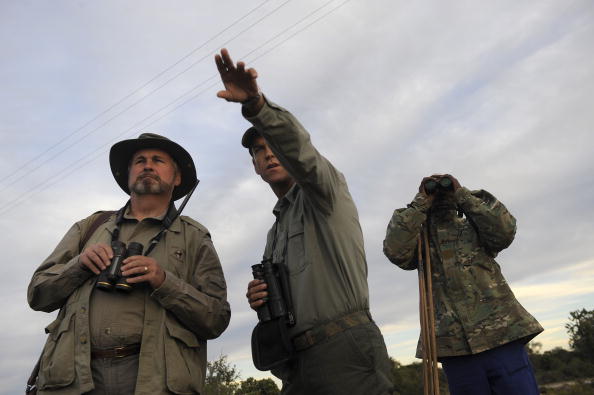 Namibia is a poster child for a successful program. | Gianluigi Guercia/AFP/Getty Images

This is where big game hunting comes into play. In Namibia, hunting trophy fees exceeded $70 million dollars. That money goes to paying for more park rangers, training, and equipment. It also goes to pay for incentives for farmers to allow the animals to roam free on their land and puts some of the money back into the local economies. Namibia’s conservation program has been so effective, that it has actually seen a massive increase in its elephant population since putting in their conservation efforts in 1996.

Next: Not all programs are perfect, however.

6. The tale of two cities

Zimbabwe is arguably one of the most corrupt countries in Africa. | Alexander Joe/AFP/Getty Images

On the flip side of the coin, not all programs like this are managed well. If you look at Zimbabwe’s program, Communal Areas Management Programme for Indigenous Resources or CAMPFIRE, it has done pretty much nothing. That mainly stems from terrible corruption in the country. Fee’s that are earmarked for community improvement or animal protection are taken by government officials and there is almost zero funding for rural councils. This is a country that is so corrupt, the president demanded elephant be served for his birthday last year.

Next: The U.S. actually benefits from trophy hunting as well.

7. Conservation funding in the United States

Hunting generates hundreds of millions of dollars in the U.S. for conservation. | Jean-Francois Monier/AFP/Getty Images

Granted a lot of our hunting permits that are issued aren’t for the hunting of endangered species, the money generated still goes to our threatened and endangered species. In some states, that revenue is the primary source of conservation funding. According to the International Association of Fish and Wildlife, the U.S. gets “$2.4 billion in annual federal income-tax money generated by hunters” and a relatively huge portion of that goes to conservation.

Next: There are problems with Trump’s reversal on the Obama era ban.

Trophies from countries like Namibia are allowed to come to the U.S. That is because their programs are well managed and have been shown to actually help the endangered or threatened species. Obama put a ban on the import of hunting trophies from Zimbabwe and Zambia because of their programs are massive failures. The administration didn’t want to ban a person from hunting, they just wanted the host country to be doing it sustainably and without corruption. The purpose of any economic sanction like this is to bolster and encourage programs that work.

I get that you are morally against hunting, but I am asking you to take the opportunity to see that there can be some good that comes out of these hunting prizes. I never thought I would, but the data suggests otherwise.