The Biggest Trend in Toys This Year Is Pretty Damn Gross

When it comes to children’s toys, they tend to be on the gross side, especially for boys. But this year, the toys that will be coming out are geared toward a very particular type of gross: Poop. Yes, you read that right. Toy manufacturers are making all sorts of toys that are really disgusting.

Here are some of the poop toys, and anything else that is tangentially related to poop, that was on display at the 2018 Toy Fair.

According to toy companies, children want to play with poop-themed games. | Romrodinka/iStock/Getty Images

Here is some competitive plunging at its finest. Players grab their plungers and try to plunge the poop sitting at the center of the game. It’s a pretty simple game, but we imagine it’s far more enjoyable than the real thing. It may be a disgusting toy, but at least you can send your kids in for the real thing, so this is actually pretty good training.

Next: Here’s another game for the plunging enthusiast.

This insane game is supposed to make your kids laugh. | Geek Spin via YouTube

Well, there are other things your kids could be getting into. This game actually seems kind of fun. It’s like a combination of a Jack in the Box and you’re worst plumbing nightmare. Each player takes turns plunging the toilet based on what number they rolled the dice for. The loser is the one who finally vacates the turd into the air.

Next: It’s like Dino Eggs, only with a toilet.

Would you allow your kids to play with a toilet game? | Spin Master

Remember those little sponges you would get as kids that were shaped like an egg? Then you threw them in the water and they became a dinosaur or something? Well, this is the same concept, just with little figurines in a small toilet bowl. The makers encourage everyone to collect them all and you know if you have a rare one if the water changes color. Fun times ahead!

Next: The greatest and grossest male joke has become a child’s game.

Pull My Finger from Jakks Pacific

This toy is silly, but is popular among children. | Toys “R” Us

Any person on this planet has to be familiar with the old prank of pulling someone’s finger. If you’re not, don’t trust anyone that asks you to pull their finger. This clever game takes that concept and turns it into a game. Every time you pull the monkey’s finger, his butt fills with air. At some point, the butt will deflate and make a classic farting noise. The player that causes that is immediately eliminated.

Next: It’s not exactly a poop game, but it is pretty gross.

We know this has very little to do with poop, but it is really disgusting. Dr. Pimple Popper is kind of like Operation mixed with a Jenga. The point is to remove zits from a plastic face. Sounds easy enough, but you can’t tilt the face too far forward, otherwise a monster zit in the middle will explode and squirt everyone in front. That might be the most disgusting thing we’ve seen from the Toy Fair.

Next: We’ve all been there, but now we can all be there together … for fun.

Don’t Step In It! 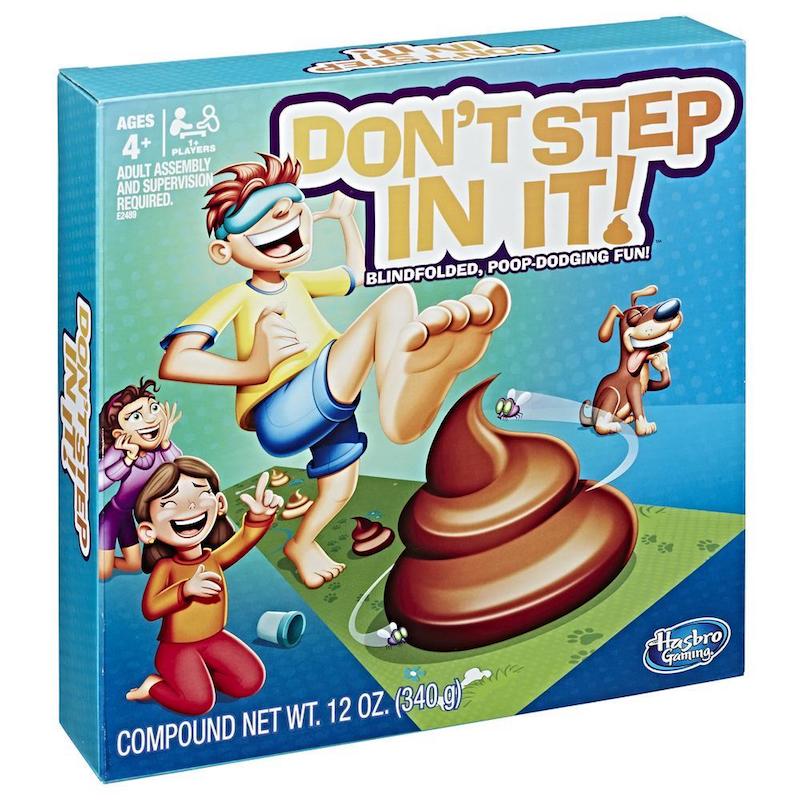 Have you ever been brave enough to walk across flaming hot coals to prove your commitment to co-workers or loved ones? Would you be brave enough to do the same thing, just with poop? Well, look no further than this shitty game from Hasbro. Don’t Step In It has each player walk down a mat blindfolded trying not to step in simulated poop. That’s pretty much it. If you really want to be a monster, throw some real poop on the mat to make it interesting.

Next:  Our thoughts and prayers go out to the parents who have to clean this toy up.

Toilets are part of a new toy trend. | BrianAJackson/Getty Images

So this technically doesn’t have any poop in it, but it does utilize toilet paper and the name does have “skid” in it. This is essentially a giant spitwad shooter, with an auto feed of toilet paper attached to it. It wets the paper for you, so all you have to do is take aim. We don’t see anything going wrong with this toy at all … ever.