Most people can’t resist a nice steak or burger, so it’s frustrating to hear so much about how beef can contribute to heart disease and an early grave. Going meatless a few days a week is a good way to reduce your risk, but there’s no way to deny the taste of red meat. Besides, most non-vegetarians struggle to feel satisfied by sticking to plant-based proteins. It could be time to look outside your regular meat rotation and start adding bison to the mix.

Bison, also known as buffalo, can be used just about anywhere you’d use beef while providing some significant advantages. According to Livestrong, a 3-ounce serving of bison sirloin contains 145 calories and 5 grams of fat while the same amount of beef has 207 calories and 12 grams of fat. Bison also takes the lead in terms of how it’s raised because it’s grass-fed and doesn’t contain antibiotics or growth hormone.

As for the taste, it’s pretty similar to beef. Some actually prefer the flavor. Muscle & Performance described it as slightly sweet and robust, making it a great choice for hearty dishes. Start incorporating this beef alternative into your diet with these five delicious recipes. Trust us, you won’t feel like you’re making any sacrifices. 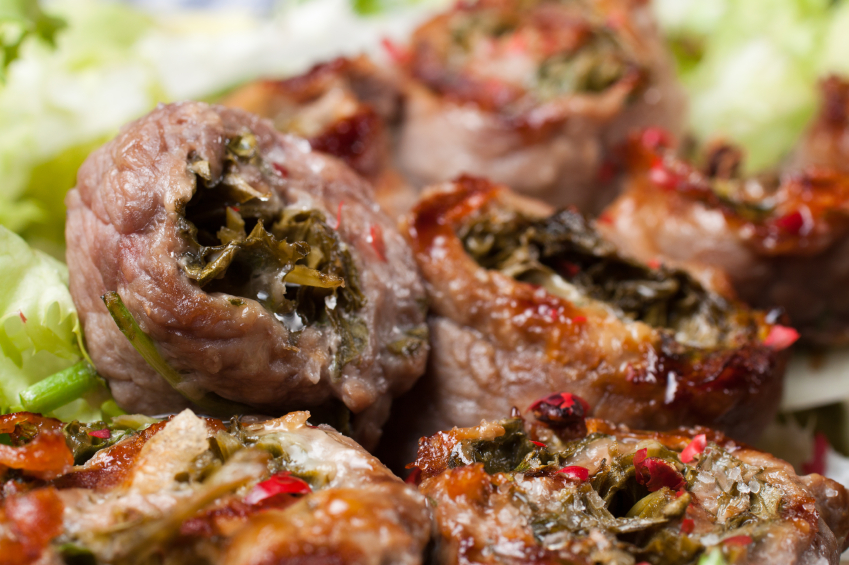 Ground meat used to be the only bison option you could regularly find, which is only helpful for making burgers or soup. If you wanted a juicy steak, you were basically out of luck. Thankfully, it’s changed in recent years. Some grocery stores and butcher shops have started carrying steaks, and many are happy to special order if you ask in advance. Finding them online is also a cinch.

Once you have your flank steak, we suggest trying this Greek-inspired recipe from The Bison Council. It’s loaded with the potent flavors of olives, feta, garlic, and oregano. You even get a decent amount of spinach for a dose of vitamins and fiber. With such a showstopping main course, a simple salad and some baked sweet potatoes are all you need to round out the meal.

Directions: Score steak on both sides by making shallow cuts at 1-inch intervals diagonally across steak in a diamond pattern. Place between two pieces of plastic wrap, and pound lightly with side of meat mallet or a small skillet into an 8-by-10-inch rectangle, about ½-inch thick. discard plastic. Place steak in a resealable plastic bag inside a shallow bowl. Combine 3 tablespoons oil, lemon juice, 2 garlic cloves, and oregano in a medium bowl. Pour over steak. Seal bag, and turn to coat. Marinate in refrigerator 2 to 4 hours, turning occasionally.

Heat 2 teaspoons oil over medium heat in a large skillet. Cook 2 garlic cloves for 1 minute. Add spinach. Cook, stirring, for 1 to 2 minutes, or until beginning to wilt. Drain spinach in a colander, pressing out excess liquid with the back of a spoon. Coarsely chop spinach. Stir in feta and olives. Set aside.

Preheat oven to 425 degrees Fahrenheit. Drain steak, and discard marinade. Spread filling evenly over steak, leaving a 1-inch border around edges. Starting from the long edge, roll up steak into a spiral, making sure to keep ends tucked in. Tie at 1-inch intervals with kitchen twine. Place on a rack in a shallow roasting pan. Roast 35 to 40 minutes, until internal temperature registers 135 degrees Fahrenheit. Cover with foil, and let stand 10 minutes. Slice into ¾-inch-thick slices, and serve.

Alternatively, cook on the grill. Arrange coals around a drip, and heat to medium. Place bison over drip pan. Cover and grill 35 to 40 minutes or until thermometer registers 135 degrees Fahrenheit. If using gas, preheat grill, reduce heat to medium-high, and adjust for indirect grilling. Once cooked, cover with foil and let rest 10 minutes. Slice, and serve. 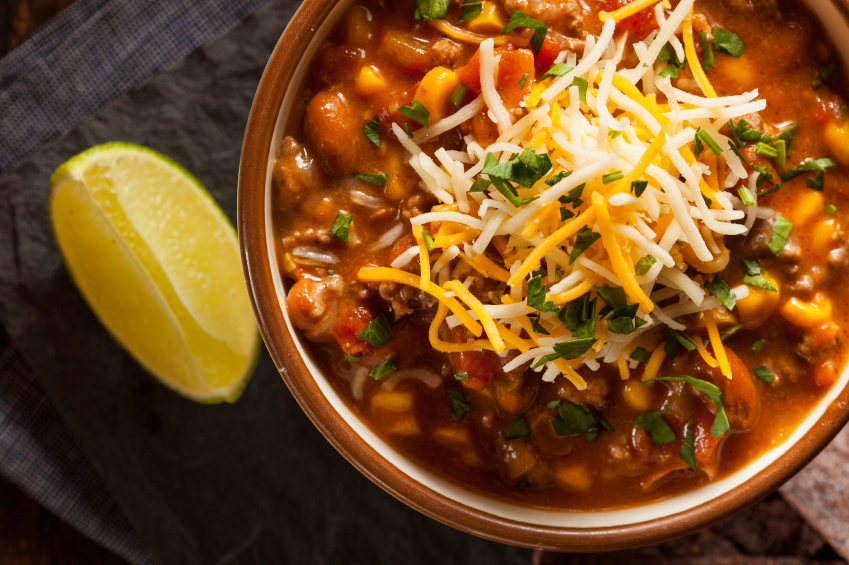 This cold-weather favorite is the perfect backdrop for bison’s rich flavor. Kelsey Nixon’s recipe, featured on Cooking Channel, gets plenty of flavor from chili powder and some fire-roasted tomatoes. In addition to the meat, it gets a further protein boost from two kinds of beans. Like any chili, you can customize this stew with any of your favorite toppings. We’re partial to cilantro, pickled onions, crushed tortilla chips, and shredded cheese.

Some are skeptical of whether bison is any better than beef, especially considering recent evidence suggests consuming saturated fats won’t significantly increase the risk of heart disease. Still, bison could be beneficial for your ticker. A 2013 study published in Nutrition Research found subjects who ate bison in place of beef experienced a reduced risk of cardiovascular disease.

Directions: Heat 1 teaspoon oil in a large pot or Dutch oven over medium-high heat. When shimmering, add bison and cook until browned, taking care not to break meat too much, about 10 minutes. Transfer bison to a plate using a slotted spoon, and set aside. Drain liquid from bottom of pan.

Keep pot over medium-high heat, and add remaining 1 teaspoon oil, poblanos, and onions. Cook until softened and starting to brown, about 5 minutes. Add chili powder, coriander, cumin, salt, cayenne, and garlic. Cook, stirring, until spices are fragrant, about 1 to 2 minutes. Add tomatoes and juices, and bring to a simmer, scraping bottom of pan to remove brown bits, about 2 minutes. 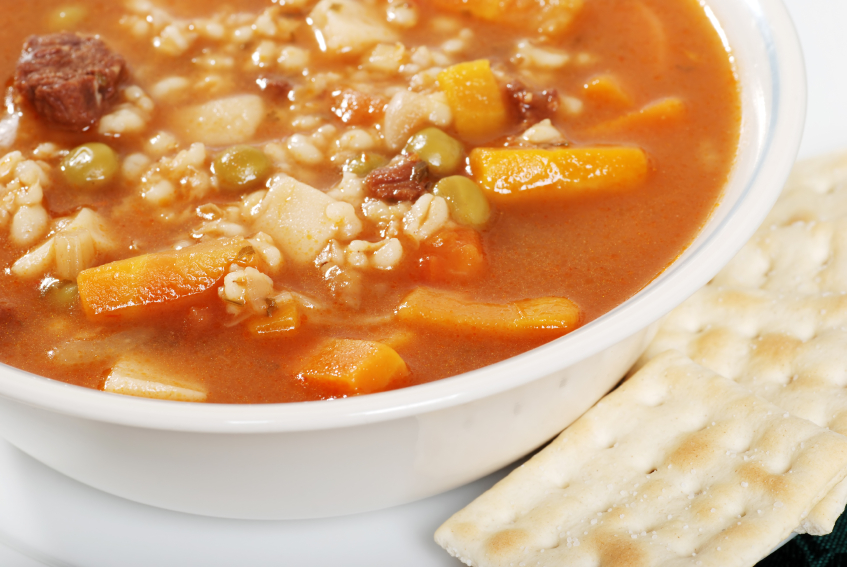 Give a bit of a twist to classic beef and barley soup by switching to bison with Cookin Canuck’s version. Filled with plenty of protein-rich meat, whole grains, and veggies, it’s a complete meal in one pot. This soup takes a bit of time to cook, so save it for the weekend. You may even want to double it so you have plenty of leftovers for during the week.

Fewer calories and less fat isn’t the only reason to give bison a little more playtime in your meals. It also contains high levels of vitamin B12, which is important for building DNA and blood cells. Digging into bison could also ward off bedroom troubles as a B12 deficiency has been linked to male infertility.

Directions: Heat 3 teaspoons canola oil in a large saucepan or pot over medium-high heat. Season bison with salt and pepper, and add to pot. Cook until browned, turning occasionally, until colored on all sides. Remove meat to a plate, and set aside.

Reduce heat to medium, and add remaining oil to the same pot. Stir in the shallot, celery, carrots, and thyme. Cook, stirring, until vegetables are softened, about 7 to 8 minutes. Add barley, broth, water, and meat to the pot. Bring mixture to a boil, reduce heat to medium-low, cover, and simmer until barley is just cooked through, about 1 hour.

Add peas, and simmer just to heat through, about 5 minutes. Taste, and adjust seasoning. Stir in parsley, and serve. 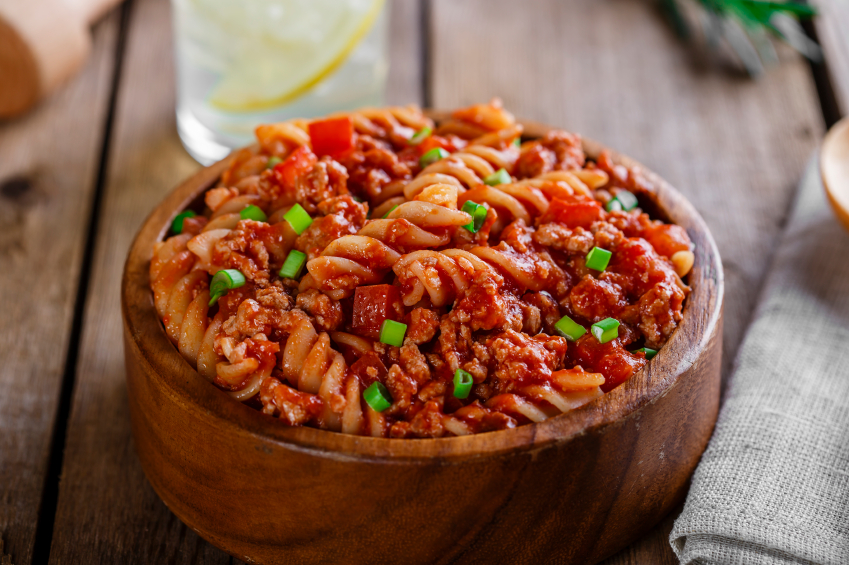 A plate of meaty spaghetti is hardly the picture of health, but you can turn the dish into a pretty nutritious choice with whole wheat pasta and bison meat. Give it a try with this version from Healthy Seasonal Recipes. Though it’s not a true bolognese, we doubt you’ll mind after you get a taste. We like it topped with a sprinkle of Parmesan cheese.

Heat oil in a large skillet set over high heat. Add bison and cook, stirring and breaking up with a wooden spoon, until browned, about 4 to 5 minutes. Stir in vegetables, Italian seasoning, salt, and pepper. Cook, stirring occasionally, until vegetables are lightly browned, 8 to 12 minutes. Add wine, and cook until reduced, 2 to 3 minutes. Stir in tomatoes, and bring mixture to a simmer. Reduce heat and simmer, stirring occasionally, until vegetables are tender, about 5 minutes.

Meanwhile, cook pasta according to package directions. Drain, toss with sauce, and serve sprinkled with parsley. 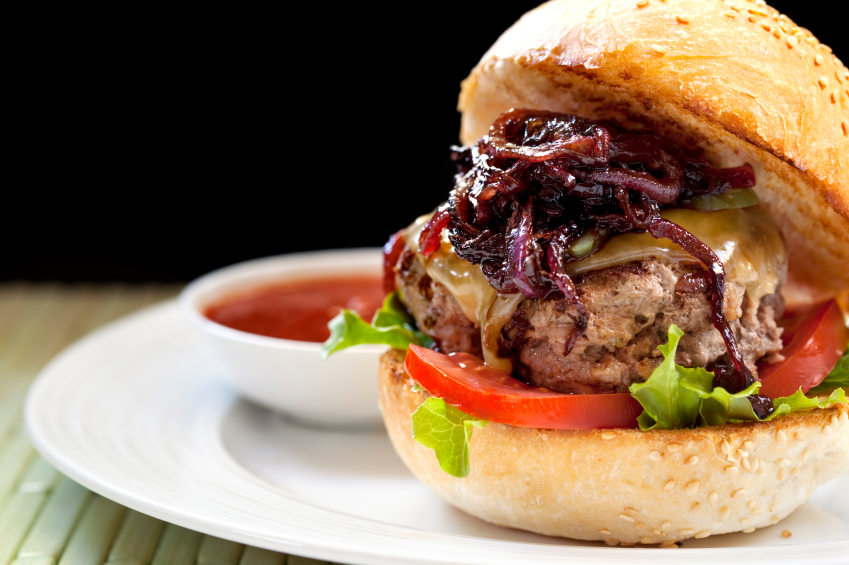 Sick of feeling guilty every time you indulge in a satisfying burger? Get all the flavor without derailing your diet by opting for Epicurious’ bison version. Instead of going for tons of fatty sauces, this recipe gets plenty of moisture and flavor from wine-spiked onions and a little bit of mustard. These burgers are so healthy, you can even feel good about topping them off with some cheddar cheese.

One last nutritional consideration: iron. While most people think of beef when it comes to this nutrient, bison actually contains more. Iron is a key player in producing hemoglobin, which transports oxygen throughout our bodies. Without enough iron, you’d feel pretty wiped out.

Directions: Heat 1 tablespoon olive oil in a heavy medium skillet set over medium-high heat. Add onions, season with salt, and cook until tender and golden, stirring often, about 10 minutes. Reduce heat to medium, and continue to cook until very tender and well browned, about 15 minutes longer. Add wine and cook, stirring occasionally, until liquid is absorbed, about 5 minutes.

Open buns and arrange, cut-side up, on a rimmed baking sheet. Place cheese slices on bun tops. Broil until cheese is melted and bottoms are lightly toasted, about 1 minute. Spread bottoms with mustard. Top each with escarole leaves, a burger, and onions. Cover with bun tops, press lightly, and serve.