Burning Goats and Hidden Pickles: You’ll Never Believe These Holiday Traditions From Around the World

Your family likely has their own unique holiday traditions, be it opening gifts on Christmas Eve or making a special holiday dish. However, no matter how crazy you think your family is, chances are these countries’ traditions take the cake.

From the “Christmas Pickle” to a holiday celebration surrounding burning goats, these traditions from around the world will definitely surprise you. Read on to learn about various cultures’ idea of a happy holiday; Catalonia’s, in particular, will shock you. 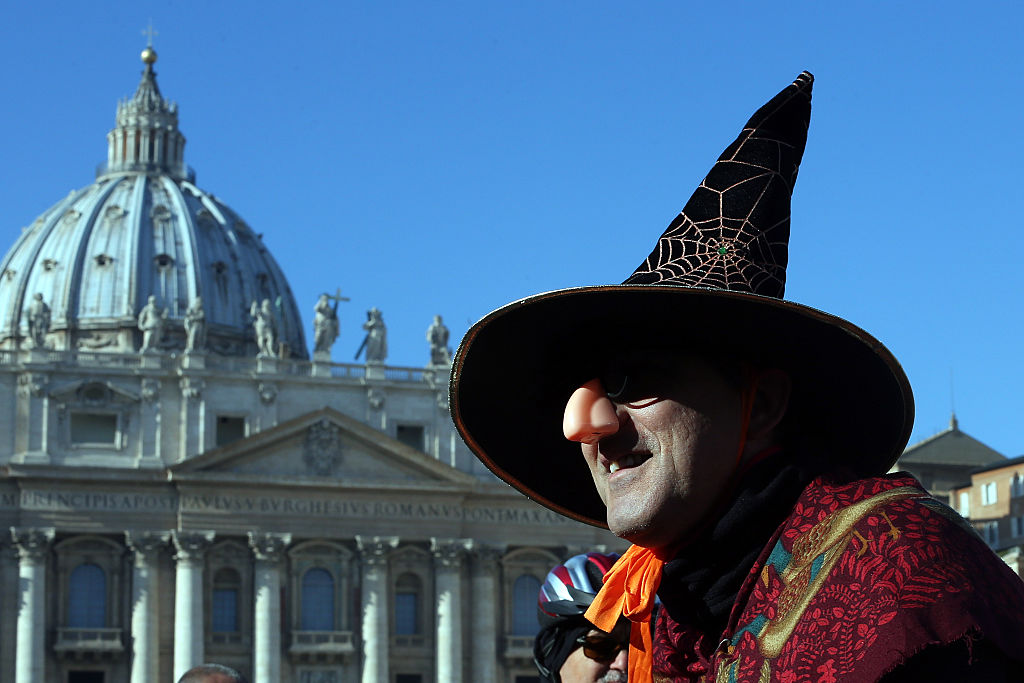 Italian children anticipate Epiphany Eve rather than Christmas Eve. On the night of January 5, La Befana, “The Christmas Witch,” delivers gifts to the good children in Italy, or coal and sticks if they’re bad.

Italian folklore presents Befana as a nice, elderly woman who looks a bit like a witch. Many say she’ll sweep the floor before she leaves, which to some represents the sweeping away of the past year’s problems. Rather than milk and cookies, families leave a small glass of wine and a plate with some local or regional Italian food for the Befana. 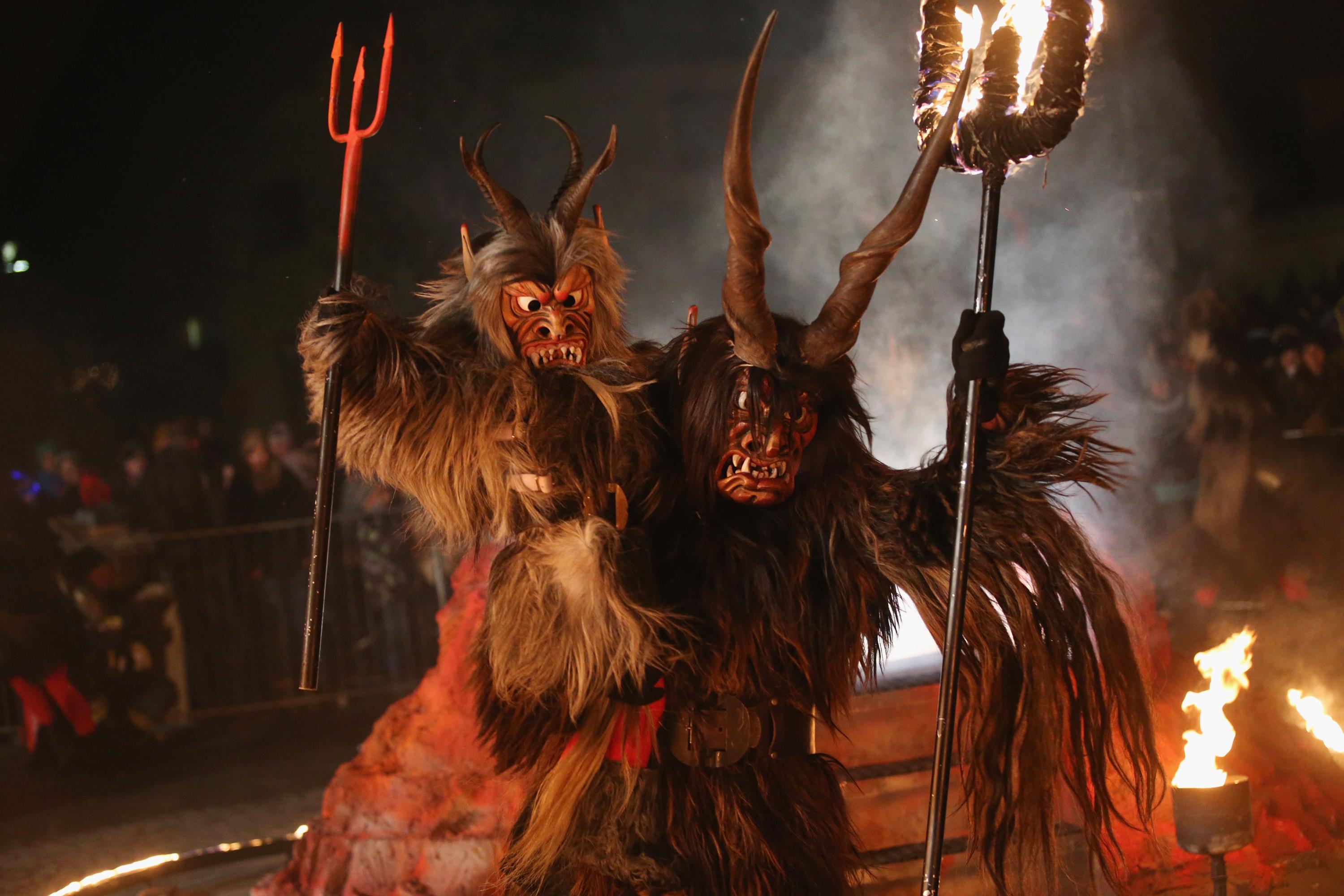 European children celebrate Christmas a bit different – and a bit more gory – than their American counterparts. In fact, they ring in the holiday with St. Nick’s evil accomplice, Krampus. Krampus’ origin dates back to pre-Germanic paganism in the region.

The Catholic Church attempted to rid of Krampus during the 12th century, as did Austria’s conservative Christian Social Party in the 1930s. None of the attempts stuck, and Krampus remained as a fearful holiday tradition as well as a pop culture icon. If you spend the holiday season in Austria, watch out for people lurking the streets dressed as Krampus to scare children.

Next: This potential marketing ploy became a beloved tradition. 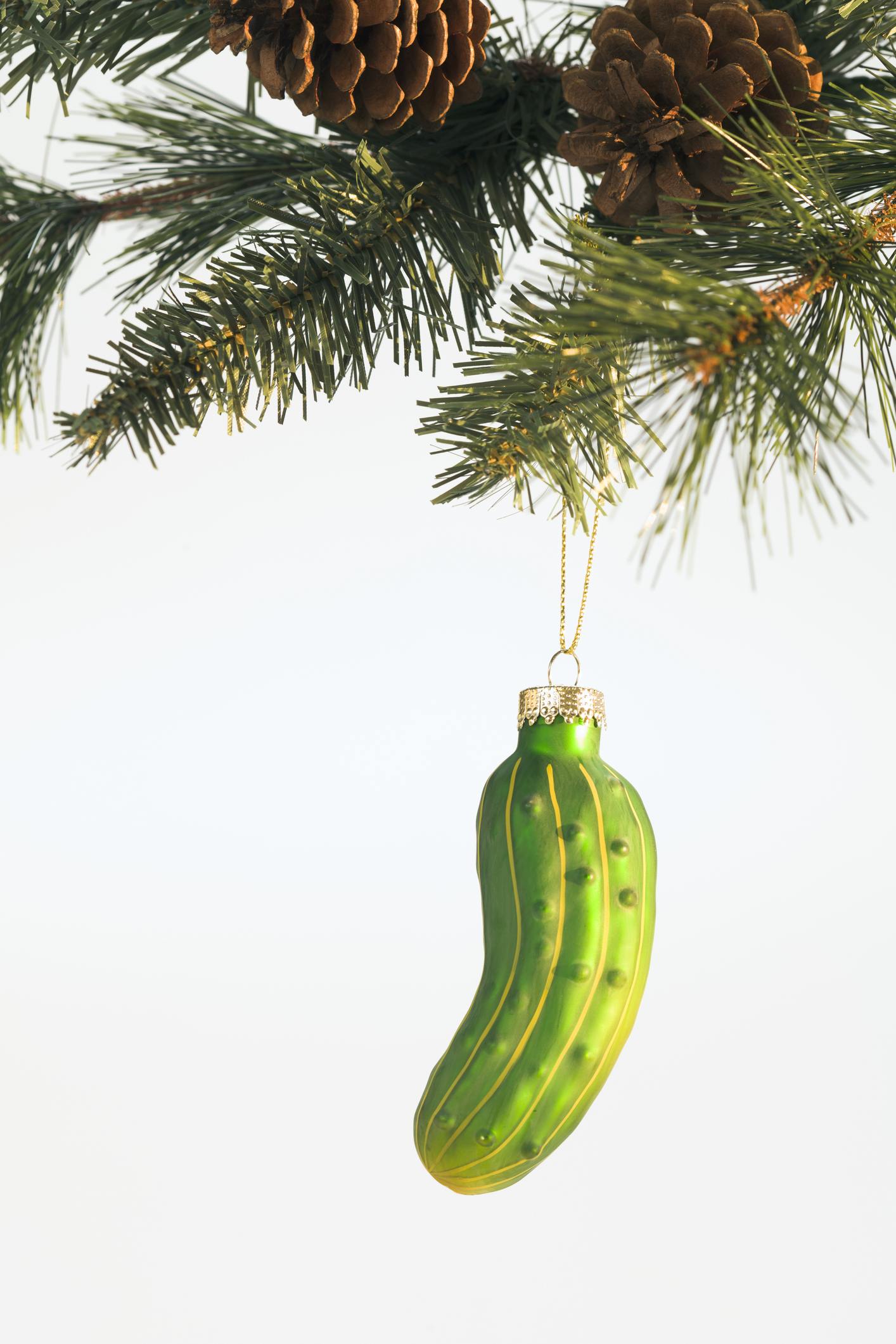 No one really knows where it came from. | DustyPixel/iStock/Getty Images

America has a unique holiday tradition, too. While the origin of the Christmas pickle is debated, the intention is clear. On Christmas morning, someone hides a pickle-shaped ornament on a branch on the tree. The children all search for it, and the finder gets an extra present from Santa or good luck for the coming year.

The origin of this tradition has put historians in a bit of a pickle. Americans used to believe that they borrowed the tradition from Germany, but the tradition is relatively unknown among Germans. Others believe the tradition was a marketing ploy to sell glass-blown vegetable decorations.

Next: The beloved tradition that’s traditionally burnt to the ground. 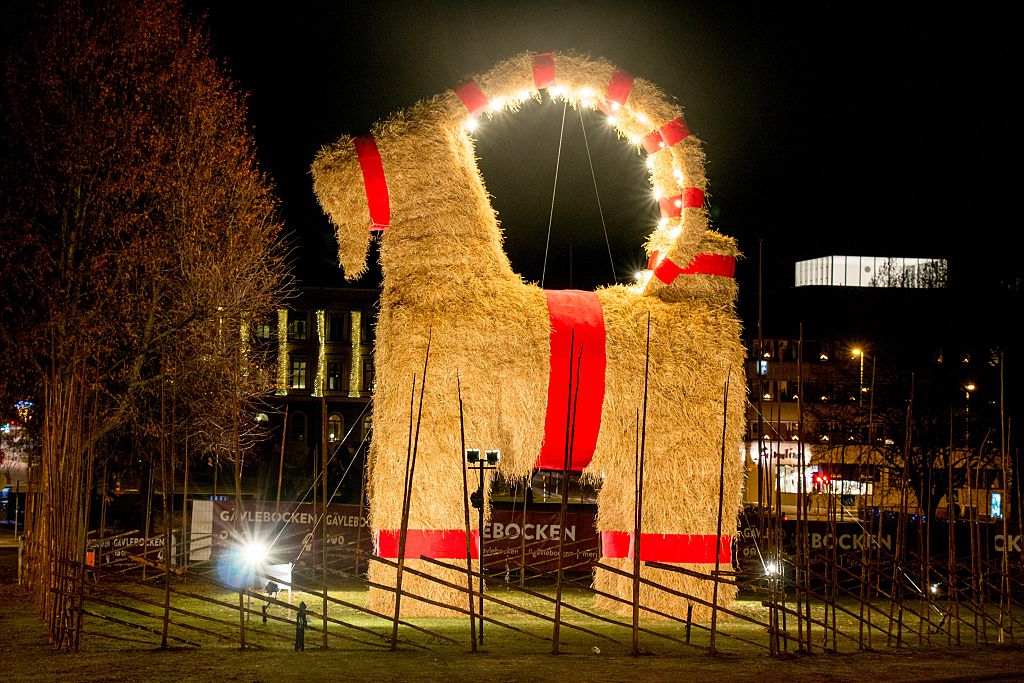 One of Sweden’s oldest Christmas traditions is the Yule Goat. However, while beloved by many, it’s more likely the giant straw goat will be burned down than remain intact through the holiday season. The modern Yule Goat is a Christmas ornament in Nordic countries and a large, celebrated straw structure in Gävle, Sweden.

Last year’s goat met a similar fate to 35 of the last 50 holiday goats. While it was supposed to be a bit harder to burn, the local politicians’ “goat guarantee” didn’t hold up. Arsonists burned the goat on the opening night of the season’s festivities, according to HuffPost.

Next: This holiday delicacy will leave your mouth watering. 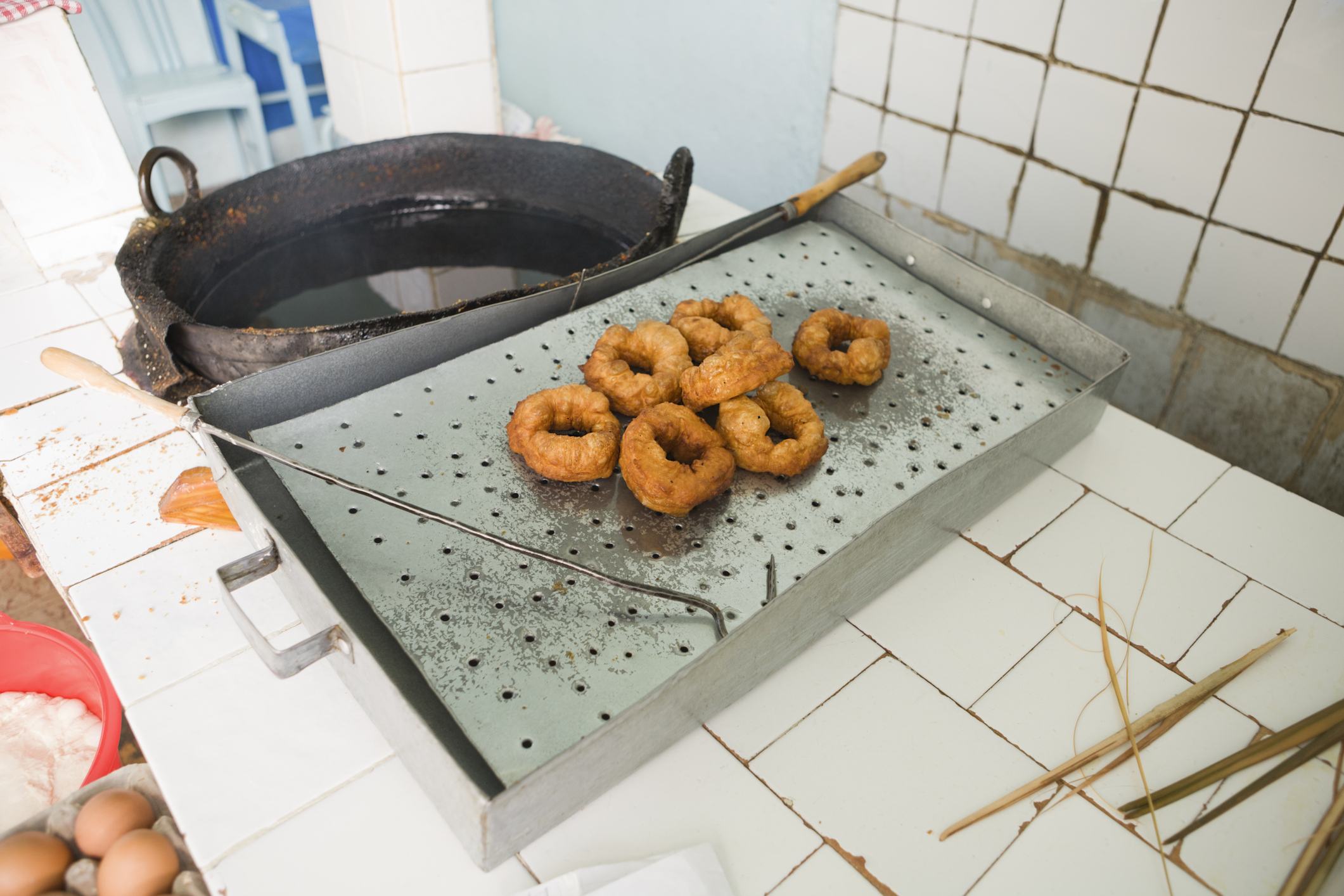 Sfenj is a typical Moroccan dessert during Hanukkah. | jgaunion/iStock/Getty Images

Moroccan has some enviable culinary traditions that should inspire Hanukkah-celebrators worldwide. While the American Jewish communities typically make potato latkes during the Hanukkah holiday, Moroccans opt for a citrusy Sfenj doughnut.

The doughnut is made with orange juice and orange zest. In Israel, sfenj are rarely, if ever, found next to sufganiyot in bakeries; they’re primarily reserved for Moroccan Jew’s Hannukah meal. “The flavor and texture don’t last long, so you want to eat them within a half an hour of frying,” explained Liora Kushner, a Moroccan Israeli who now runs a catering company out of Brookline, Massachusetts.

Next: Why have one Santa when you can have 13? 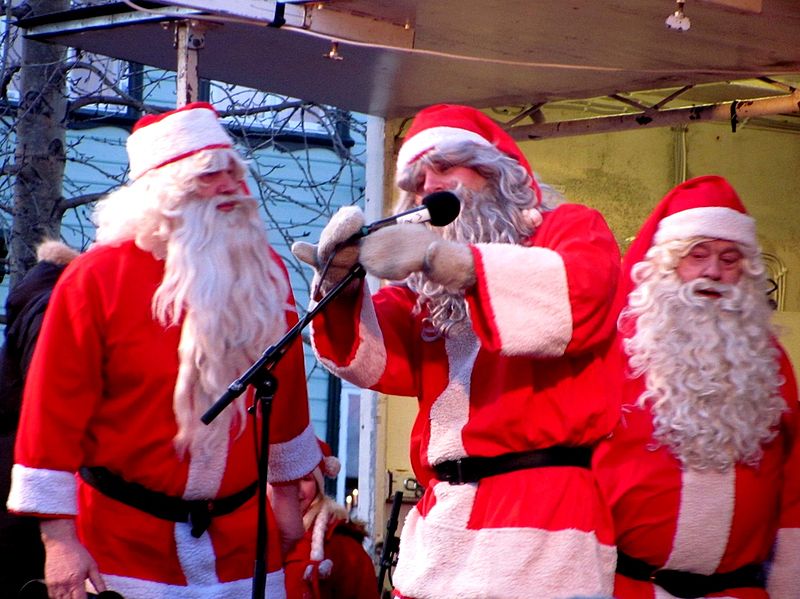 Each of the Yuletide Lads has a different personality. | Lusinemarg/Wikimedia Commons

Not all children reap the abundance of gifts, however. According to Smithsonian Mag, the Yule Lads won’t hesitate to leave a rotting potato if they believe a child has been bad. While the Yule Lads’ names are still up for debate, they each notably have a distinct personality that affects the gifts they leave.

Next: This is the strangest nativity scene you’ll ever see. 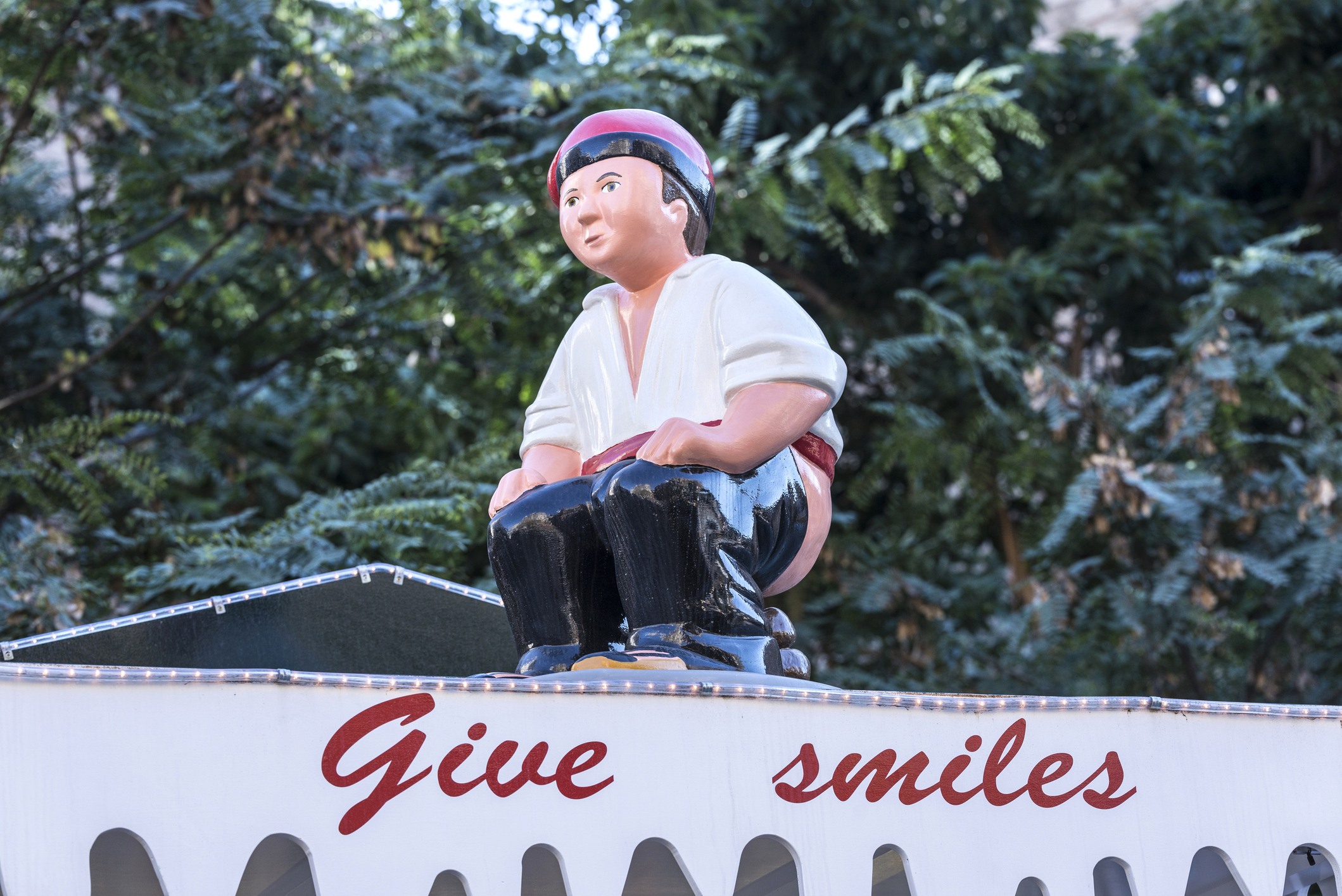 Catalonia’s nativity scene will put yours to shame, we guarantee it. The Caganer, or as Time refers to it, “the defecator,” appears a harmless addition to the depiction of Jesus’s birth from the front. However, from the back, the Caganer (usually an older man) has his pants around his ankles as he does his business.

The tradition allegedly symbolizes “fertilizing the earth,” and while children find the Caganer hilarious, Barcelona’s city council attempted to rid of him in 2005. They commissioned a nativity scene excluding the familiar face (and backside), but it was seen as an attack against the Catalonian tradition. After much criticism, the 2006 nativity scene restored the Caganer to his rightful spot. 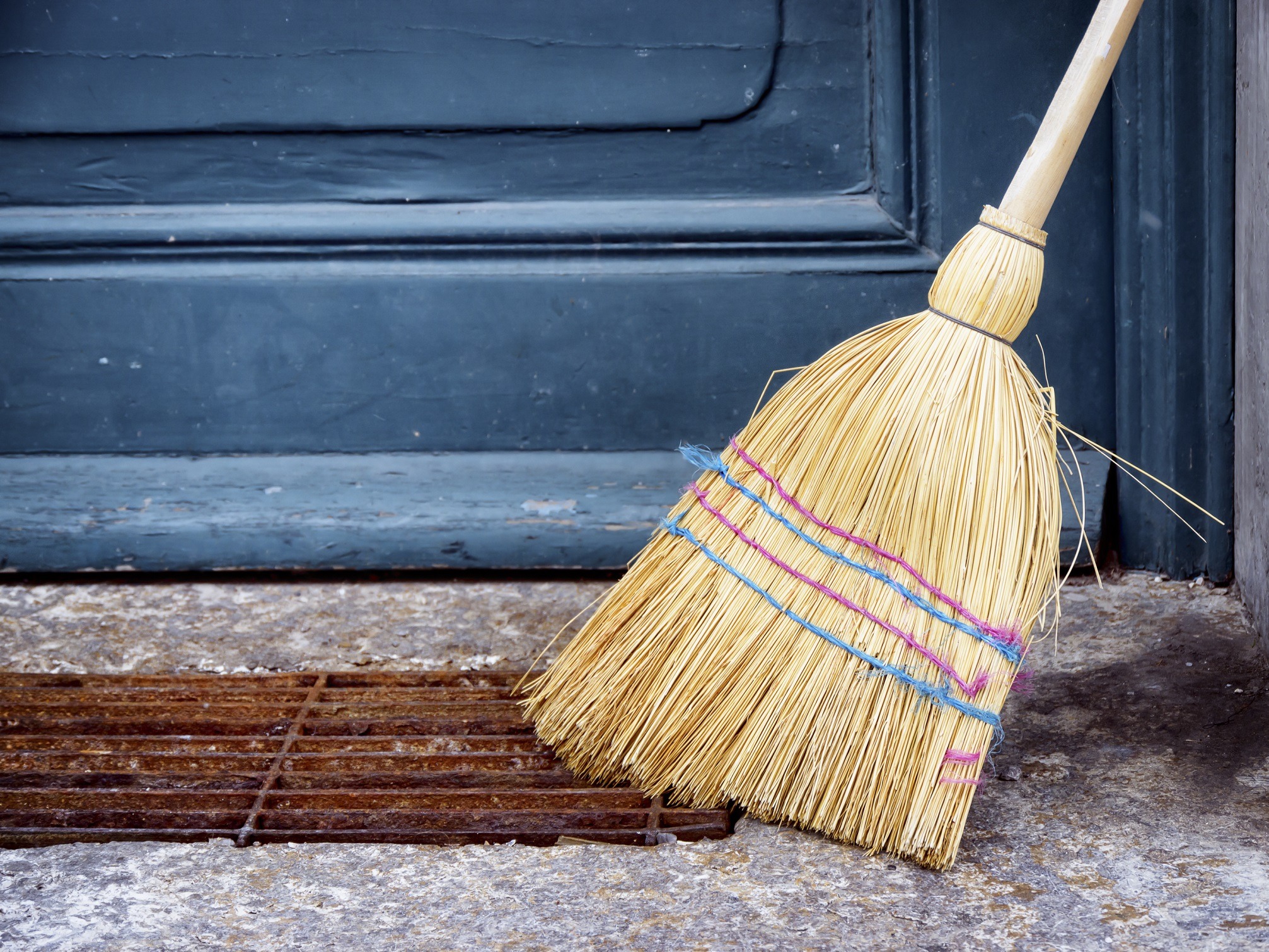 The witches won’t come calling if they don’t have their brooms. | FooTToo/iStock/Getty Images

Norwegian families hide their brooms when Christmas Eve comes around. Legend has it that witches and evil spirits come out on December 24th, so what better way to deter a witch than to take her ride away? The tradition is said to be remnant from ancient pagan days.

Next: This holiday celebration features an animal skull. 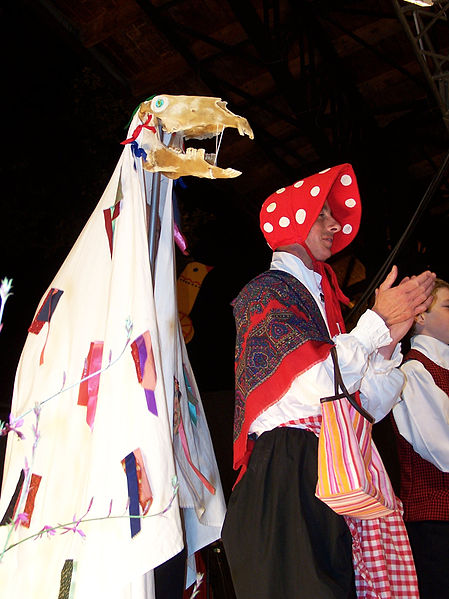 Mari Lywd (the Grey Mare) is an interesting, ancient tradition that’s meant to bring good luck. In Wales, a villages was selected each Christmas season to perform Mari Lywd. The villager paraded around the streets wearing a mare’s skull while the rest of the town would sing. The tradition, once dismissed as an act of paganism, has been revived by various groups.

While Mari Lwyd died out in many parts of Wales, you can still see the tradition acted out at the St Fagans: National History Museum.

Next: These impressively-carved vegetables make for a beautiful, albeit unconventional holiday festival.

Night of the radishes

While the “Night of the Radishes” may sound like an overzealous vegetable festival at first, this Mexican celebration is impressive. Every Dec. 23, the Mexican state of Oaxaca presents a display specially-grown radishes in its Noche de Rabanos. The vegetables grow to around 20 inches each and weigh approximately 6 pounds. The radishes are expertly carved; some are transformed into nativity scenes, while others are made into secular, “Radishes in Wonderland.”

Originally, shopkeepers carved radishes to entice shoppers to enter their stores in the zóocolo, or town plaza. Today, it’s a three-day festival that lasts through Christmas.

Next: The legend that made a spider a Christmas hero.

The legend of the Christmas spider 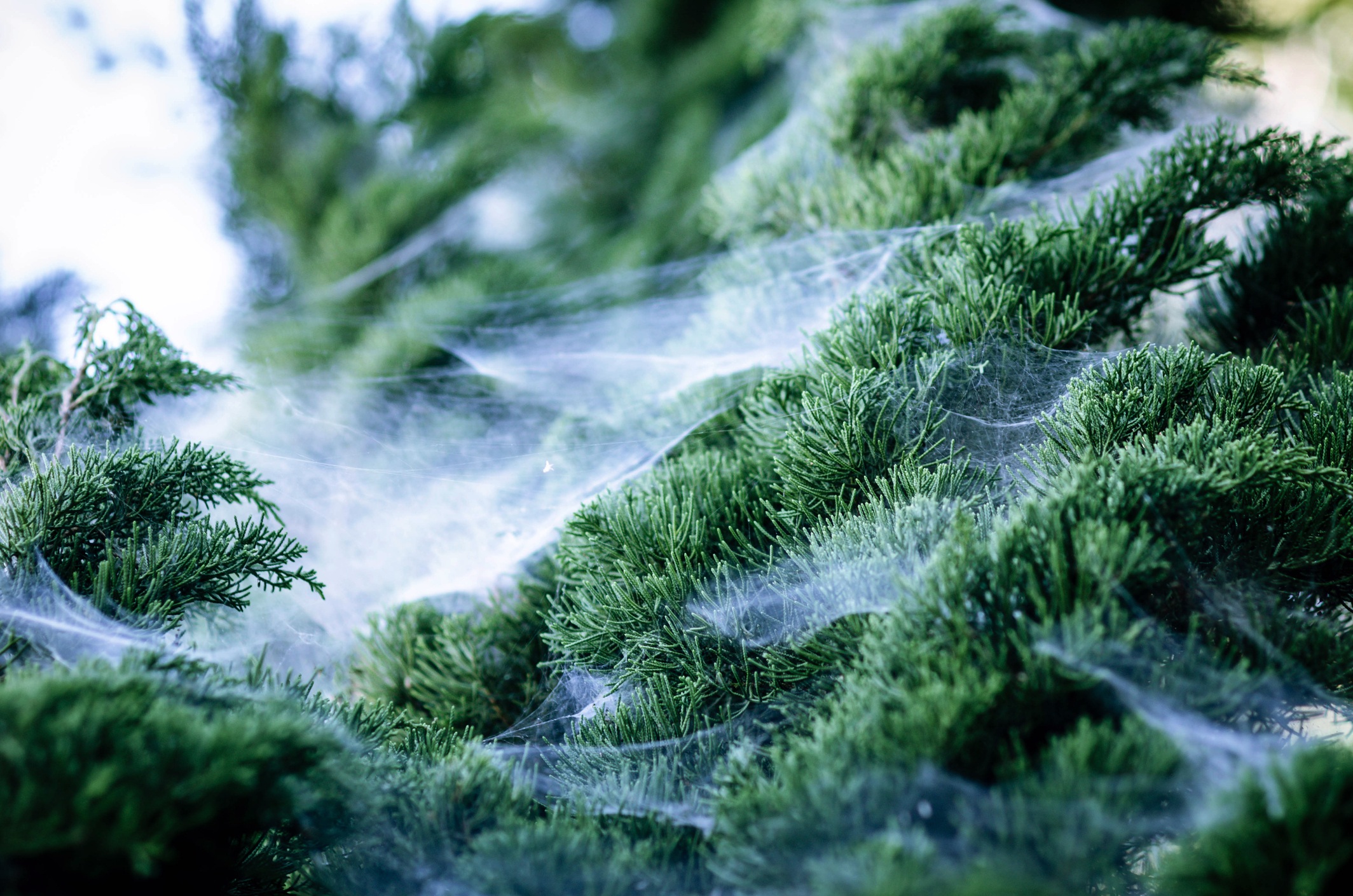 Adorable unless you have arachnophobia. | VICHAILAO/iStock/Getty Images

Legend has it that a poor widow lived with her children in a desolate hut. While the children wanted to use a growing Evergreen tree as a potential Christmas tree, they had nothing to decorate it with. Their mother cried herself to sleep, while the spiders, who heard her despair, covered the tree with beautiful webs.

Ukranian families cover their Christmas trees in spider webs made from crystal, paper, metal, and plastic, among other materials, to pay homage to this folklore.

Next: The not-so-traditional way this city’s residents travel to mass. 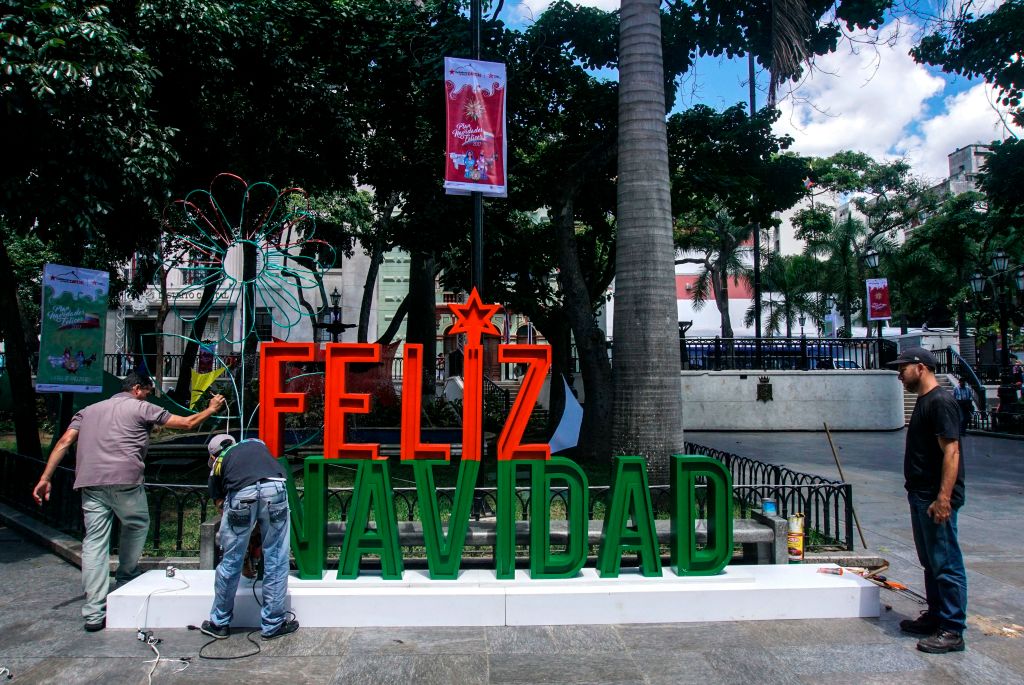 According to the Latin Post, it’s customary for the entire capital of Venezuela, Caracas, to roller-skate to early morning Christmas Mass. Many city streets restrict vehicular access so that the unconventional routine goes off without a hitch.

In addition to street closings until 8 a.m., “children are put to bed earlier than usual to give them enough strength for getting up early to attend mass the next day,” according to Hispanic Culture Online. “At the end of the mass, people go out and eat tostadas and drink coffee.”

Next: The costumed dancers that delights and scare this country. 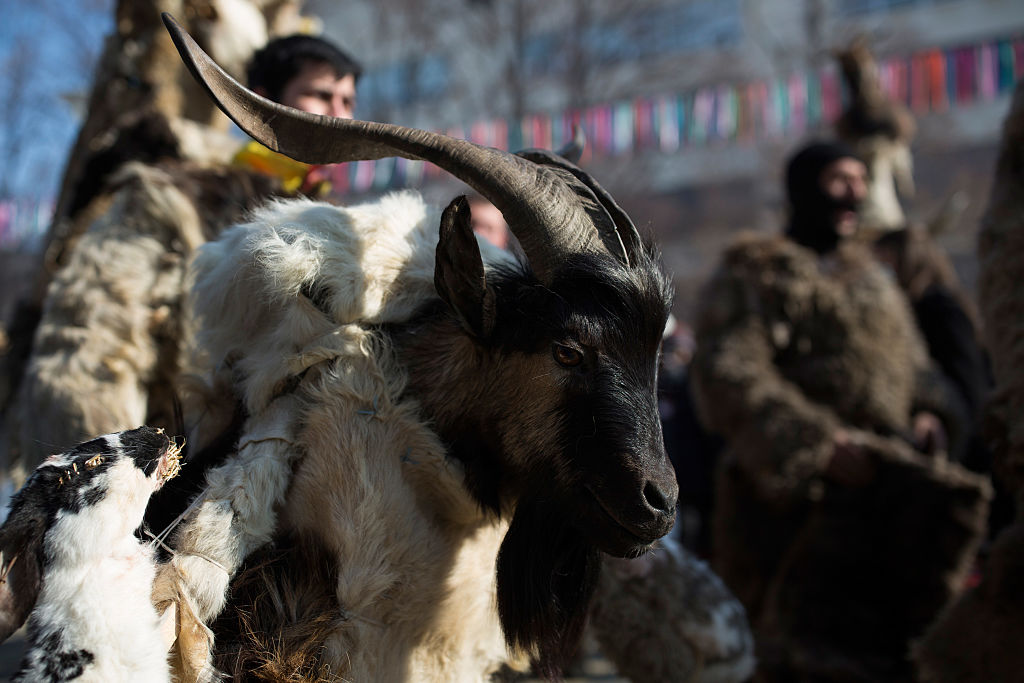 According to Latvia’s national website on traditional festivities, mummers are costumed dancers who dress as animals and macabre figures. The figures include “live corpses” and aim to bless the households, encourage fertility, and scare away any evil spirits.

The mummers are part of the winter holiday, Ziemassvētki, Latvia’s traditional Christmas celebration. Historically, mummers were invited into the homes they visited and fed bacon buns, sausages, and ale. If a mummer was correctly identified, they would have to unveil themselves to the home.

Next: This holiday tradition doubles as a cleansing ritual. 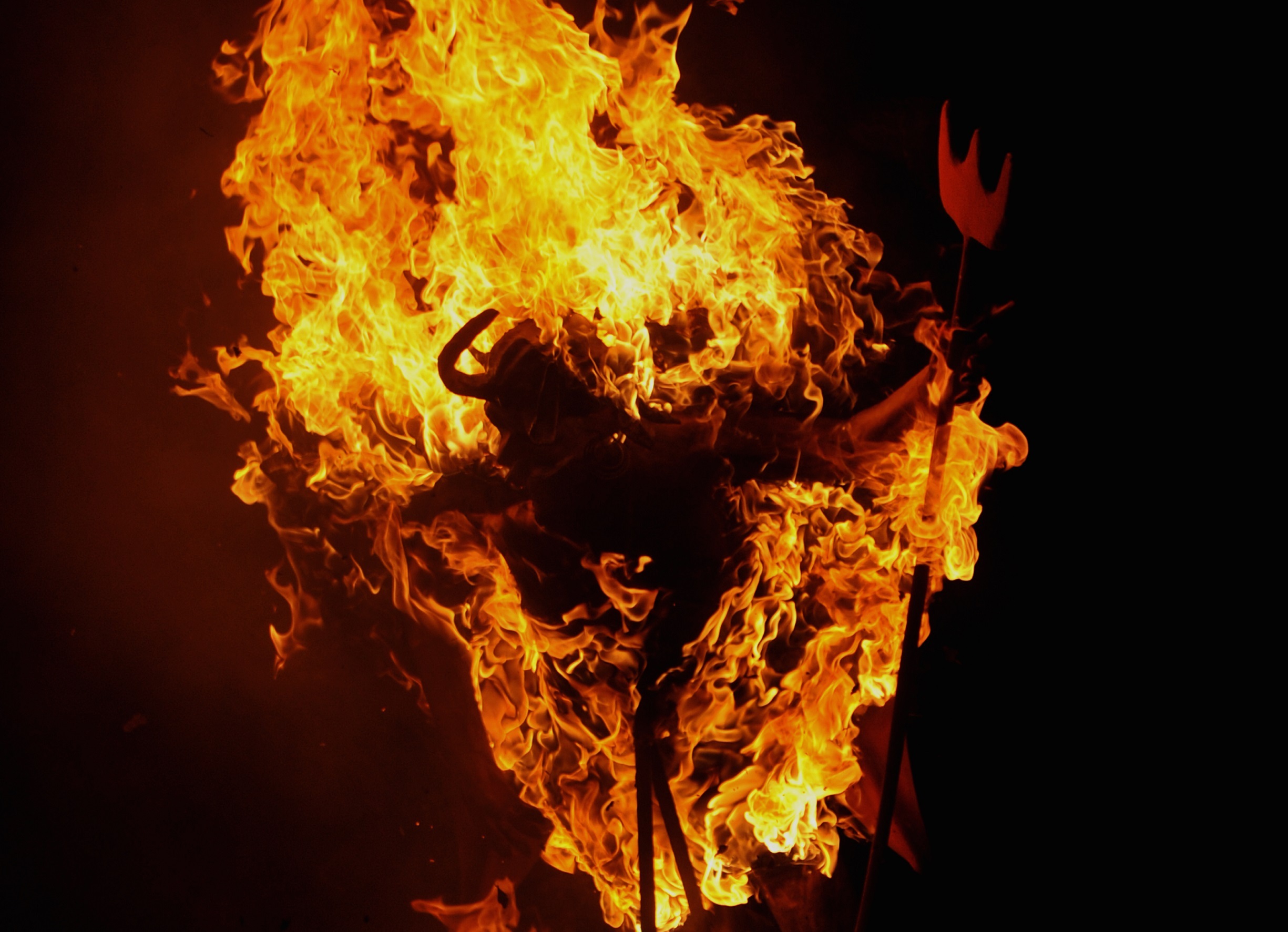 La Quema del Diablo, or the ceremonial “Burning of the Devil,” precedes Guatemalan Christmas. Across the country, people light bonfires and burn figures of Satan to symbolically cleanse their homes. Residents are also supposed to sweep, take out the garbage, and add all of this trash to the bonfire. This ensures a devil-free Christmas season and clean new year for the participants.

Next: These goblins come out to play for the 12 days of Christmas. 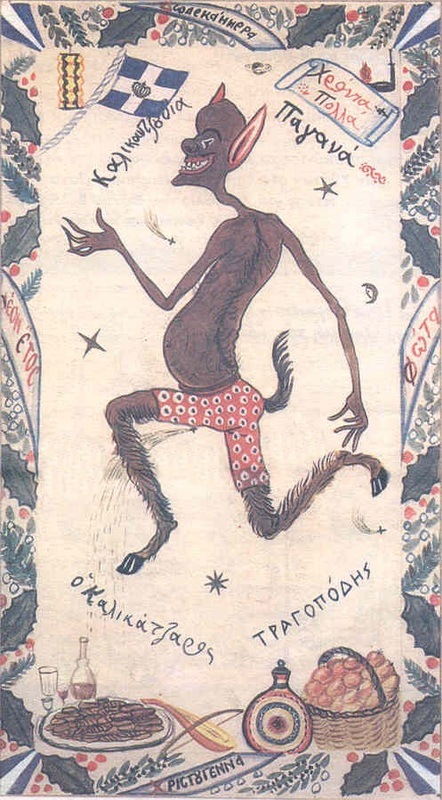 In Greece, many people believe in kallikantzaroi, or goblins that appear to cause mischief during the 12 days of Christmas, from December 25 to January 6. Folklore says that the Kallikantzaroi dwell underground the rest of the year. Families typically exchange gifts January 1, St. Basil’s Day.

According to legend, children born during the twelve days of Christmas are at risk of transforming into kallikantzaros each holiday season.