Check Out These Super Crazy Weapons Our Military Almost Used

Militaries around the world are in a constant battle to stay ahead of the curve when it comes to weaponry. In that constant battle comes some seriously disturbing ideas on how to create devastation. Out of that comes weapons of mass destruction, like nuclear bombs, chemical, and biological warfare, and sometimes, the “chicken nuke” or “bat bomb.” Check out these weapons of war that we have created but never used; each one is stranger than the last.

A great example of a bird-brained idea. | Photo via National Institute of Science and Technology

Back before there were computer chips and GPS to guide missiles to their target, most missiles were essentially lobbed at their target in the hopes that it would hit.

That’s where animals came in. B.F. Skinner had the ingenious idea to have a pigeon guide the missiles to their target. The birds were trained to peck at a picture of their target on a projected screen at the front of a missile. Depending on where they pecked, the missile would adjust course.

The project was scrapped in 1944, but then some other genius revived it in 1948. Eventually, it was discontinued when computers began to play a bigger role in warfare.

Next: Pigeons weren’t the only animals used for suicide missions.

The bats would carry small devices that would be detonated on a timer. | panda3800 /Getty Images

Bats like to roost under awnings, in crevices, and tight, hard-to-reach areas. Imagine having a cluster of them released at altitude and having them deliver their firey payload all over a city. You would burn a much larger area than a conventional cluster bomb. During the development of the project, a few of the bats escaped by accident and burned a generals car and a hanger to the ground.

The plan was ultimately abandoned when military officials found the nuclear bomb to be far more effective.

Next: The military will think of the craziest ways to use animals in warfare.

A picture is seen on display of a seven-tonne nuclear landmine codenamed “Blue Peacock” at an exhibition of secret nuclear plans from the cold war at the National Records Office in London. | Getty Images

During the cold war, allied forces had to think of different ways to protect the west from a Soviet invasion. They even set up booby traps in case they ever tried to take their territories. One such trap was a seven-tonne nuclear landmine. The only problem is that it was in Germany where the ground gets really cold, and if the mechanisms got too cold, they won’t work.

The British developed a plan to use chickens to keep the landmine relatively warm. The plan was to leave the chickens with enough food, water, and oxygen to survive for a week inside the mine. This would, in turn, create enough warmth inside the bomb to keep all the mechanisms working.

They ditched the plan after concerns of nuclear fallout were raised. After all, they would like their city back after a war.

Next: This weapon really brings new meaning to “tripping-balls”

They even had plans to arm warheads with the hallucinogens. | Picsfive/ Getty Images

MKUltra was one of the more famous former CIA projects. The whole purpose of the project was to figure out how to use the human mind to our advantage. One of those advantages was to have the enemy believe they were being attacked … by each other.

Through the MKUltra project, the CIA developed an aerosol version of BZ, a super-hallucinogen, that would be released upon a target and would make the enemy hear and see things that weren’t actually happening. Think “bath-salts,” but in weaponized form.

The project was eventually abandoned for unknown reasons. Most of the MKUltra documents were lost or destroyed by the CIA. Some believe that the results were just too wildly unpredictable.

Next: The balls of the military are enormous. 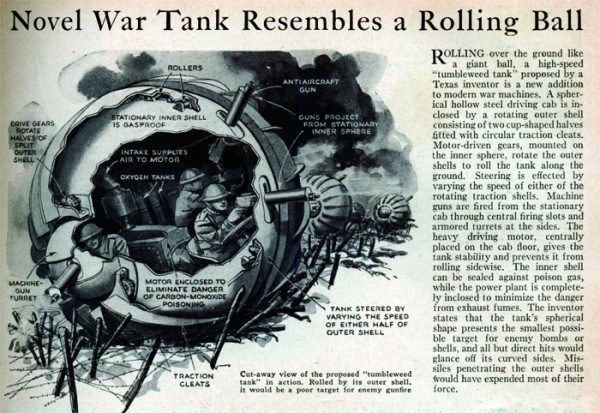 They were the most aggressive balls to ever get noticed by the military. | Photo via Modern Mechanix

Have you ever seen a hamster wheel and thought to yourself, “I should attach some guns to that, throw three soldiers in there, and let them run wild”? Well, the military has. An inventor by the name of A.J. Richardson designed a tank that had two rotating hemispheres with giant traction scoops on them. The hemispheres would encapsulate the soldiers and keep them safe.

The only problem is that they couldn’t see out of the tanks. Yes, they were designed with no view-ports. So, the soldiers trudging through no-mans land would have no idea if that was their friend or foe they just ran over. There is also the problem of the soldiers blindly firing in all directions.

It was a pretty solid concept but ultimately proved completely impractical. The closest thing ever made like this was the Kugelpanzer, made by the Germans.

Next: Have you ever wanted to feel the power of a cannon between the legs?

This is what happens when you combine the hilarity of a scooter and warfare. | Registro Italiano Veicoli Abitativi Ricreazionali Storici, foto di C.Galliani/Wikimedia Commons

Look, we know you can look pretty hip riding a scooter in Europe, but there is no need to weaponize these little things. Only the French would say “hey, how about we just attach a giant cannon to our little scooters?” The idea behind this oddly conceived weapon was for pure mobility. The cannon itself was detachable. This would allow a couple of troops to take it into the field, set it up, fire, and move to another location at high speed.

It could also be fired while in motion. The guy on the back would load and fire on the driver’s command. Sit back and picture that Charlie Chaplin-esque scene unfold. The idea was actually taken very seriously by the French, and they produced around 600 of these little guys in 1950s. Eventually, they abandoned the scooter and discontinued production after a few years.

Next: The military had the idea way before S.H.E.I.L.D.

Quite simply, this project was abandoned before it got off the ground. The concept proved too fragile to keep a vessel of that size in the air. It would have to be a blimp, which could only support a couple aircraft, or it would need thrust to keep it aloft which is prohibitively expensive. Not to mention the obvious, but that would be the easiest craft in the world to take down.