Foods You Order From Chinese Restaurants That Aren’t Authentic

Which menu do you pull out of the junk drawer when you call for takeout? Chances are good that you go for Chinese foods. Americans love their General Tso’s chicken, lo mein, and hot and sour soup (even though those dishes aren’t the healthiest options). But did you know many popular Chinese recipes, at least those served at restaurants across the United States, don’t actually come from China? 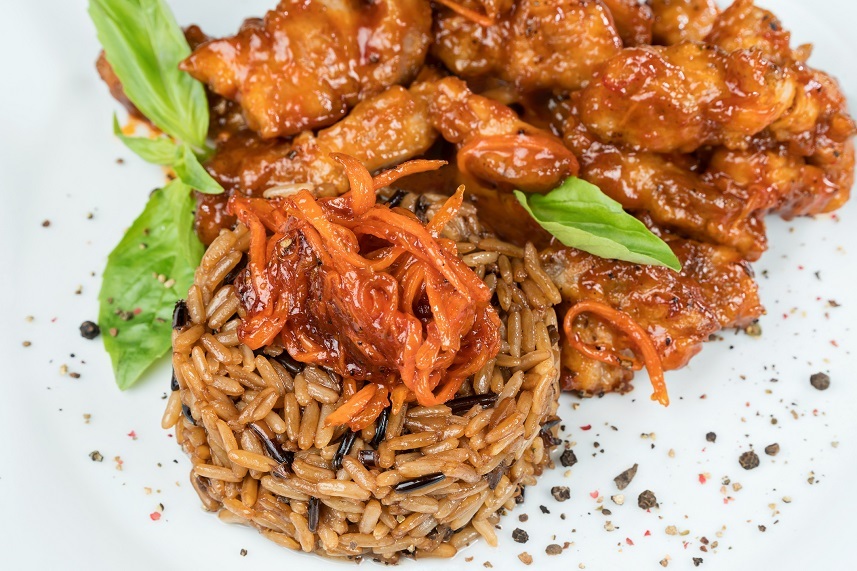 Moo shu pork isn’t an authentic part of Chinese cuisine. But it does conveniently illustrate how Chinese-American food evolved in the first place. First We Feast reports the first Chinese immigrants to the United States came mostly from the city of Taishan in the southeast coastal province of Guangdong. There, the cuisine consisted mostly of simple stir-fries. And flavor profiles “veered toward the sweeter end.” First We Feast explains, “This fare established the foundation of Chinese food in America.”

The second major wave of immigration came during the 1960s. It brought regional cuisines by chefs from Taiwan and Hong Kong. These chefs introduced recipes for moo shu pork, kung pao chicken, and orange chicken. Those dishes were based on Beijing, Sichuan, and Hunan dishes, but chefs adapted them to suit American tastes.

The Chicago Tribune reports moo shu pork was likely invented by someone from the “late 1940s-early 1960s generation of predominantly non-Cantonese immigrants.” That means it’s not an authentically Chinese dish.

Smithsonian.com reports, “General Tso’s chicken may be named after a 19th century Hunanese general, but he certainly never ate anything resembling the sticky-sweet meal.” The dish first appeared at a restaurant in Taiwan in the 1950s. Peng Chang-kuei, a chef from China’s Hunan province, invented it.

But the version of General Tso’s chicken you order at your local Chinese place tastes nothing like Peng’s original creation. It probably bears more resemblance to the version New York City chef Tsung Ting Wang cooked in the 1970s. Wang added the sugar — even though Hunan cuisine isn’t sweet — and the crispier batter.

The Merced Sun-Star reports the egg roll as you can order it at your local Chinese restaurant “is a creation of Chinese-American restaurateurs who used local ingredients to create Chinese-ish foods that would appeal to American diners.” The dish seems to have been invented in New York in the 1930s. And it doesn’t trace its origins back to an authentic Chinese dish. 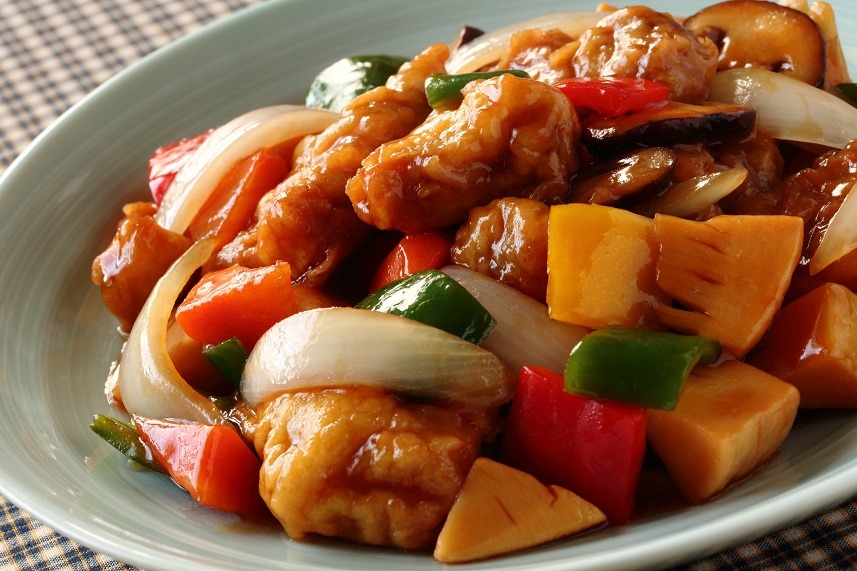 The Food Timeline reports, “Sweet and sour pork (chicken, beef, shrimp, etc.), as most Americans know it today, is a far cry from the traditional Chinese cuisine.” However, the dish you’ll find at American-Chinese restaurants does derive its flavor profile from authentic combinations. That’s more than can be said for many of the dishes you’ll see on the menu at Chinese restaurants across the U.S.

However, Food Timeline points out in authentic Chinese cuisine, sweet and sour sauce “is not traditionally paired with pork. It is a seafood dip. Other pungent sauces, such as hoisen and bean paste, are more commonly used in pork cookery. It is also important to note that tomatoes (tomato paste/ketchup are typically used in American sweet and sour recipes) are not native to China.”

NPR reports anti-Chinese sentiment ran rampant in the United States in the early 20th century. At the time, the government passed anti-immigration legislation. But the laws had an important exception — one NPR nicknames “the lo mein loophole.”

Some Chinese business owners could get merchant visas. Those visas enabled them to travel back to China and return with employees. Only a few types of businesses qualified. And in 1915, restaurants were added to that list. Chinese restaurants proliferated, and they brought with them versions of Chinese foods tailored to American tastes.

That includes lo mein, which NBC learned is “as American as apple pie.” And as the New York Times reported in the 1980s, “What Americans refer to as lo mein is chow mein to the Chinese, and what is chow mein to Americans does not exist in China.” 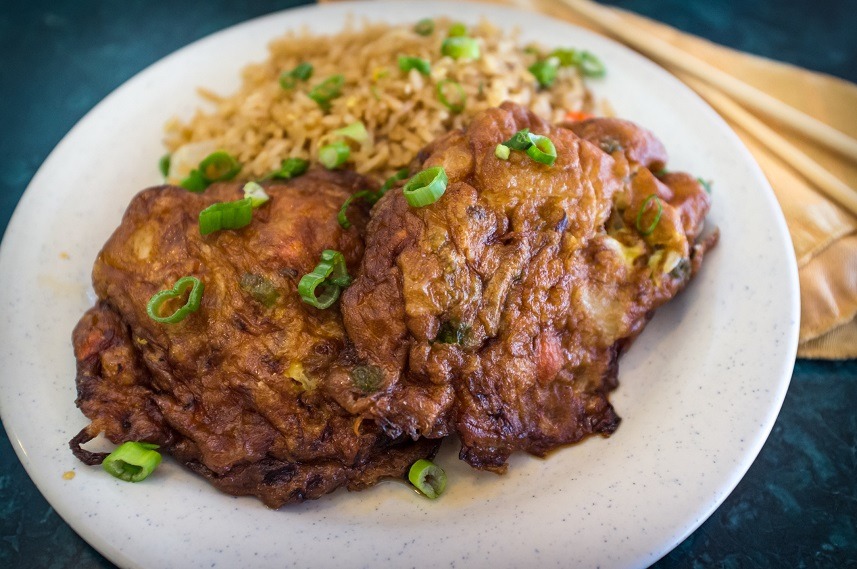 Saveur reports egg foo yung, an icon of Chinese-American food, “originated with 19th-century immigrants from Canton in southern China.” But it’s been “tweaked over the decades to suit American palates.” By the turn of the 20th century, Saveur notes, “Chinese-American fare like egg foo yung was being embraced by the middle class as a bohemian pleasure.”

Thrillist learned occasionally a restaurant that serves authentic Chinese food will have egg foo young on the menu. But according to one chef, “It’s really an American invention, and it can be disgusting. It’s like a savory pancake that’s an amalgamation of vegetables, batter, and shrimp that’s deep-fried and topped with gravy. It loses all the texture when you put gravy on it, and it just becomes mush on mush.”

History.com reports chop suey is “about as American as it gets.” The dish seems to have been invented in San Francisco in the 1840s. NPR reports chop suey shops were common in American cities up until the 1960s. And they illustrated the niche that Chinese food occupied in American dining at the time. They offered “not fine dining but cheap ethnic meals.”

LA Weekly reports there’s nothing authentic about orange chicken. The dish “was shamelessly concocted to suit the American penchant for fried, overly sweet chunks of meat, a far-off distant cousin of a cousin of the original Hunanese dish that supposedly was its inspiration.” Panda Express popularized the meal in the late 1980s. In fact, First We Feast reports Panda Express — which along with P.F. Chang’s has had a huge influence on American-Chinese food — sells more than 65 million pounds of its signature orange chicken each year.

The first Panda Express opened in 1983. And P.F. Chang’s followed in 1993 with the goal of “offering more gourmet-seeming dishes like chicken lettuce wraps instead of platters of caramelized orange chicken.” As First We Feast explains, “Panda and Chang’s took into account what the mainstream loved about Chinese food and made it consistent and safe, with Americanized décor and branding.”

The Food Timeline reports, “No one knows exactly who made the first chow mein and when.” However, the American version of chow mein is related to chao mian. This authentically Chinese dish includes previously cooked noodles stir-fried with meat and vegetables. But in chow mein, the chef deep fries the noodles in bundles to make them crisp. However, as The New York Times notes, what Americans call “chow mein” doesn’t actually exist in China.

Business Insider reports, “There are two problems with the beloved beef with broccoli dish: There is no broccoli (at least not the Western version) in China, and Chinese people generally don’t eat much beef.” The Huffington Post also weighs in and explains, “In China, dishes do exist that combine beef with Chinese broccoli, called gai lan, but the vegetable is completely different, as are the dishes’ flavor profiles.”

The Atlantic reports the ubiquitous beef with broccoli dish typically comes “drenched in a brown sauce.” But interestingly enough, that part of the dish might be more authentically Chinese than the beef or the broccoli. “The current recipe for brown sauce varies little from the Cantonese formula.” It includes stock, soy sauce, oyster sauce, and cornstarch. But it’s Chinese-American restaurants’ penchant for putting the sauce on everything that makes it less true to authentic Chinese cooking. 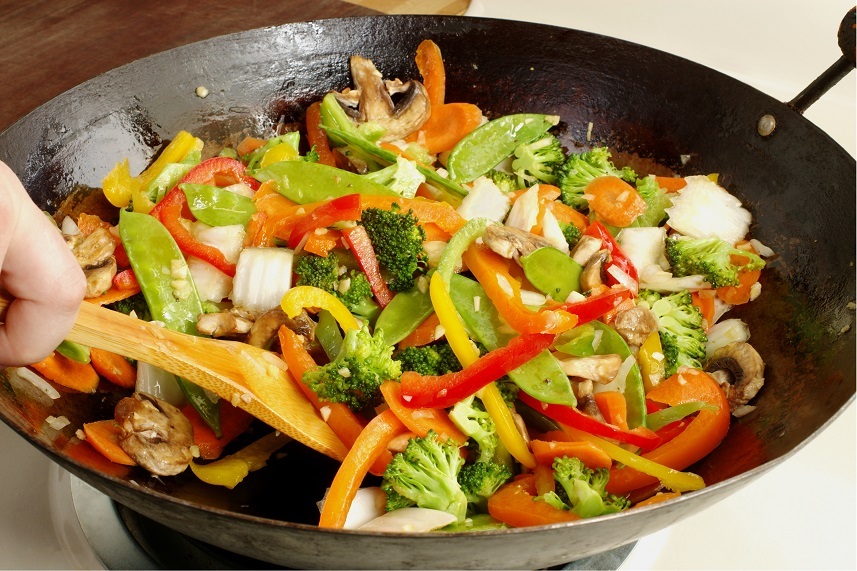 Moo goo gai pan is an Americanized version of a Cantonese dish. The Daily Meal reports the dish includes sliced or cubed chicken with button mushrooms. It also incorporates vegetables, such as bamboo shoots, snow peas, water chestnuts, and Chinese cabbage. The ingredients get sautéed and tossed in a mild white sauce.

The Chicago Tribune reports moo goo gai pan isn’t actually a Chinese dish. In fact, it “belongs to the second generation of Chinese-American food.” However, moo goo gai pan has been around longer than many of the other Americanized “Chinese” dishes. In fact, Americans have been able to order it at their local Chinese restaurants since the 1950s or earlier.

The Chicago Tribune reports crab rangoons have been served at Trader Vic’s since the 1930s. However, these dumplings only began appearing on Chinese-American restaurants’ menus in recent decades. And they’re almost certainly not of Chinese origin. The reason why? They contain cream cheese, and many Asians are lactose-intolerant.

The Chicago Tribune posits the name “rangoon” might have been chosen by the proprietor of a Polynesian-style restaurant to evoke exoticism with these inauthentic crab and cream cheese deep-fried dumplings. Business Insider reports most “Chinese people would not understand the appeal of crab rangoon, deep fried wontons filled with fake crab meat and cream cheese.”

Dumplings — both wontons and numerous other types — form an important part of regional Chinese cuisines. That includes Cantonese, Sichuan, Shanghai, and Ningbo. Lucky Peach has the rundown on 36 different types of authentically Chinese dumplings. But none of that variety is reflected at your local Chinese restaurant. Americanized versions of wonton soup, and other wonton dishes, don’t match the flavor and nuance you’ll find in authentically Chinese dumplings from any of the country’s regional cuisines.

Business Insider reports by ordering a Chinese-American wonton soup, you’re missing out on vastly superior, Hong Kong-style noodle soups. The publication asserts, “The shrimp dumpling soup is far superior to the American version. The shrimp dumpling has a much more delicate shell, the broth has a fragrant wonton flavor, and the soup is filled with fresh noodles.”

Serious Eats reports a good egg drop soup “should have a clear, ever-so-slightly thickened broth with the intense flavor of chicken, supported by a hint of the sweet depth of Chinese ham. You should taste ginger or scallion from the broth itself, but their aroma should waft up along with the steam from the bowl. The eggs should form tender, silken curds, some large, some small, offering texture, sure, but predominantly flavor and richness to an otherwise extremely simple soup.”

First We Feast reports fortune cookies are an American invention. As American-Chinese restaurants developed their own identities, “Chinese restaurateurs were willing to experiment with new marketing methods and take calculated risks to attract diners — even if such methods had no connection to the mainland.”

Newsweek reports modern Chinese food in the United States is “unconcerned with authenticity,” but ultimately, “that’s why it’s great.” That’s more thanks to imaginative new takes on region-specific dishes than to what Newsweek characterizes as “generic, greasy Chinese food.”

But nonetheless, chefs’ efforts to bring something new to the literal and figurative table is “helping give Chinese food more visibility and expanding the definition of what it can be.” After all, we consider ramen and chow mein just as much a part of American cuisine as a cheeseburger or a slice of apple pie. And that’s not because those dishes are an authentic representation of Chinese cuisine.