5 Cities That Have the Most Incredible Halloween Celebrations

It’s October, which means pumpkins, ghost decorations, and costumes are lining stores in preparation for the night we’ve all been waiting for — Halloween. Whether you’re into the spooky movies, outrageous parties, or the pumpkin beer, Halloween has something to offer everyone. And, if you’re lucky enough, you may live in a city that takes their Halloween celebrations very seriously. If your town feels kind of dull during this Holiday and you can’t get enough of the horror movie marathons and costume creations, it may be time to venture to the cities that celebrate this holiday best. Here are the top five cities that know how to do Halloween right.

This sleepy New England town is a cute destination any time of the year if you’re looking for museums, old wooden mansions, and plenty of history, but when you visit this town during October, this city completely comes to life. Salem was home to the Salem witch trials, where 20 people were executed during the 1600s under the presumption they were witches. This city takes their history very seriously, and it really livens up with haunted happenings during the Halloween season.

Smart Destinations suggests visiting the Salem Time Machine 4-D Walk-Thru Adventure into Salem’s past. This 4-D “time machine” takes you back into the history of the city, so you can experience the horrors firsthand, and it comes complete with actors, 3-D glasses, and black lights, so you can’t tell what’s real and what’s not. You can also visit the Haunted Happenings carnival for some rides and games that are kid-friendly, or you can spend the night taking the Haunted Footsteps Ghost Tour. No matter what you choose to do in Salem, there’s always a haunted happening or witchy store on a street corner nearby.

New York City is home to a few of the biggest Halloween parties in the world | iStock.com

The hustle and bustle of this city doesn’t stop at Times Square, Broadway, or Central Park. In fact, New York City has plenty of haunted happenings occurring all over the city in October that you’ll need to see to believe. New York City’s Village Halloween Parade is their biggest claim to fame, where puppets, dancers, artists, bands, and New Yorkers all in costume march through the streets to celebrate the holiday. You’re welcome to take part in the parade, too, but having a costume is mandatory, and you should expect large crowds of people who are serious about Halloween fun.

The Webster Hell Halloween Party is one of the biggest Halloween parties in the city. Located in Webster Hall, this four-story building is filled to the brim with dance music, fire performers, and creative costumes, so come prepared to dance the night away. Don’t opt for a forgettable costume, either — there’s a $5,000 cash prize awarded to the best costume of the night. You can also check out Halloween parties hosted by Junebug, which are known for their high-profile DJs, funky cocktails, and killer costumes. If parties aren’t your thing, check out the Great Jack O’Lantern Blaze, where 7,000 carved pumpkins are displayed for all to see.

Craving an experience that’s outside the U.S.? You’ll find beautiful sights and fun happenings all over London year round, but Halloween is a particularly excellent time to hit up this happening city. If you want to try your hand at diving, why not snorkel in the dark surrounded by sharks this Halloween? The Telegraph highlights some of London’s best Halloween adventures, starting with an event at London’s Sea Life Aquarium. This Halloween event allows snorkelers to swim in a dark tank that’s lined with red-light torches so you can see the sharks approaching while you’re in the water.

Midnight ghost tours are also aplenty here, where you’ll be guided through historic buildings that are not typically open to the public. If you’re more of the partying type, then London has you covered at The Mansion London, where a Halloween ball is thrown each year. You won’t know where it’s located until 48 hours before the event begins, and its secret location is only provided to those who have purchased a ticket. If you’re lucky enough to go, you’ll encounter two dance floors, liver performers, artists, tarot readers, and art exhibitions once inside.

Historic Derry has fun for the whole family for the entire Halloween weekend | iStock.com

This small city in Northern Ireland doesn’t typically have too much going on for the rest of the year, but come Halloween time, it’s a totally different story. Noted as one of the best Halloween destinations in the world, Derry is the only walled city in Ireland that’s still completely intact, making it a spooky and perfect destination for Halloween parties that feel secluded and creepy.

You’ll need to check out the Banks of the Foyle Hallowe’en Carnival if you find yourself in Derry, as this is the biggest and best celebration that takes place in this city. Over 40,000 festival-goers take part in activities like the Halloween street carnival and costume party and “Awakening the Walls,” where fire, music, and performance take place around the walls of the city. If you’re visiting the Haunted Harvest Market and Hell’s Kitchen, you’ll find tasty treats from all over with live music, street performers, and DJs, too. Most of the celebrations are family-friendly, but if you’re looking for something to do after dark, check out the various Halloween balls in the city. 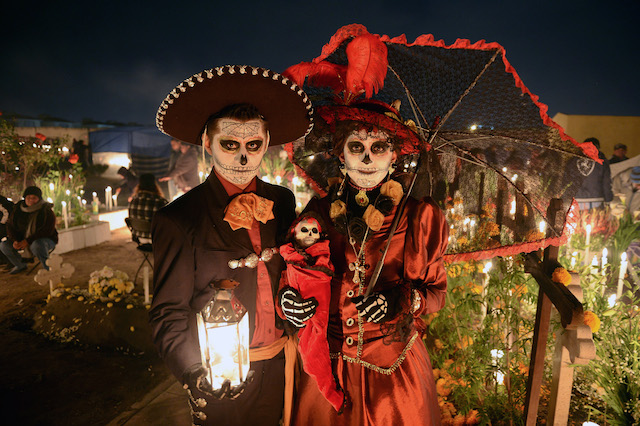 This city knows how to throw a serious party for any occasion, and Halloween is no different. While Mardi Gras may be New Orleans’s claim to fame, their celebrations get just as wild and crazy during the month of October, and there’s a little something for everyone. New Orleans Online explains this city is fully stocked with haunted tours to start off your Halloween, where you can venture through cemeteries, haunted houses, and the French Quarter, which is notoriously one of the most haunted areas. Don’t have a costume yet but want to take part in the fun? The costume shops in New Orleans are world-class, and you’ll be skipping from one bar or party to the next looking your best.

The Voodoo Music & Arts Experience is one of the most popular festivals in the city, and it takes place every Halloween weekend. Thousands of visitors are in attendance, and it begins just before sundown and goes all through the night with a killer music lineup and fresh local food. The celebration on Frenchman Street is also a huge draw, as it features the Frenchmen Art Market for local arts and crafts as well as unique music clubs that know how to celebrate Halloween. And, you can’t miss out on the Krewe of Boo, the official Halloween parade of the city. Whether you’re planning on partying the entire night away or trick-or-treating with the kids, New Orleans’s celebrations are not to be missed this season.