Even if you’re not hosting a dinner party, simply bringing a dish can be pretty intimidating for those who aren’t used to spending time in the kitchen. Frankly, certain attendees make it intimidating for even the most experienced cooks. Instead of admitting defeat by picking up a loaf of bread, throw together a gratin. They’re simple to make, look impressive, and taste fantastic. If you show up with any of these seven recipes, you’ll be hearing compliments all night.

Anyone who enjoys savory-sweet combinations will go nuts for Real Simple’s cheesy apple and potato gratin. It’s easy to assemble, but the slicing does take a little bit of time. For the best results, use a mandolin to slice the potatoes and apples. Just watch your fingers because the blades are extremely sharp. 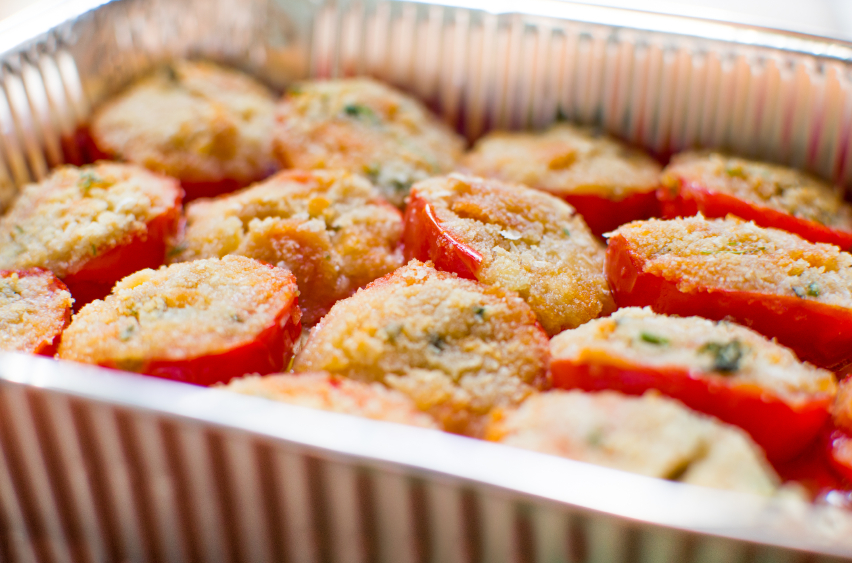 Fresh tomatoes are so good as is that it’s easy to let the season pass without doing much more to the fruits than turning them into salads or sandwiches. It’s a shame because they’re fantastic when baked into a gratin. The good news is you can find perfectly sweet grape and cherry tomatoes any time of year. Put them to use in Jacques Pépin’s simple side with garlic and bread. It tastes just like summer, regardless of what the calendar says. 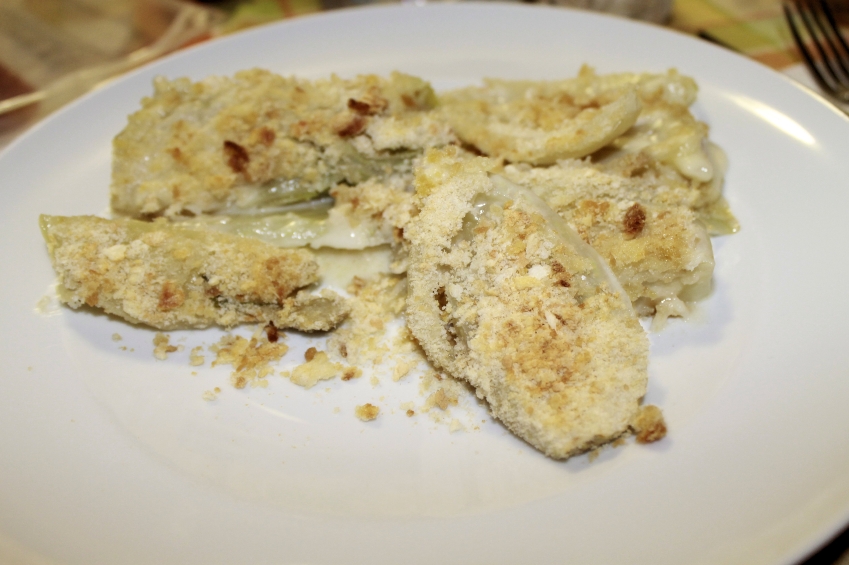 Fennel can be an off-putting ingredient for some folks, tasting too strongly of licorice. We have a feeling even these people will like Ina Garten’s savory gratin, featured on Food Network. The fennel becomes sweet and mellow after spending so much time in the oven and the crispy topping is impossible to resist. Roast a pork tenderloin in the same oven for a super easy route to dinner.

Directions: Remove stalks from each fennel bulb and discard. Cut bulbs in half lengthwise through core and remove core by cutting into bulb in a V shape, being careful to leave wedges intact. Cut each piece into two, three, or four wedges, depending on the size. Arrange wedges, cut-side up, in a gratin dish just large enough to hold them in a single layer.

Pour chicken stock and wine over fennel and season with 2 teaspoons salt and ¾ teaspoon pepper, dot with diced butter, cover tightly with foil, and bake for 35 to 45 minutes, or until fennel is tender. Remove from oven and increase oven temperature to 425 degrees Fahrenheit. 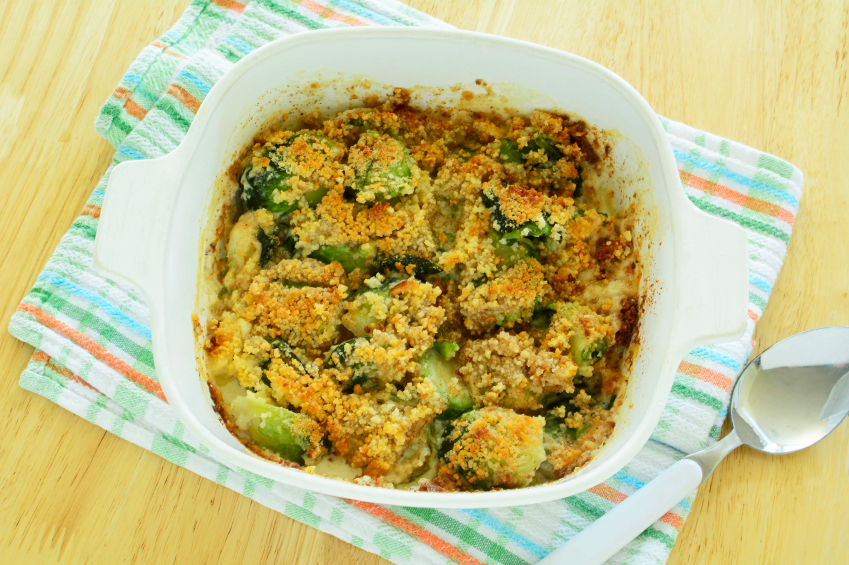 Cruciferous veggies go luxe in Epicurious’s creamy casserole. This rich gratin makes a great accompaniment to a Sunday feast, and it’s a total winner for potlucks. If you find yourself with leftovers, morph it into breakfast by topping a generous scoop with a few fried eggs.

Directions: Fill a large bowl with ice water. Cook sprouts in a large pot of salted, boiling water for 2 minutes. Add cauliflower and cook until vegetables are crisp-tender, about 3 minutes longer. Drain and transfer to ice water to cool. Drain well.

Combine cream, shallots, and sage in a large saucepan. Bring to a boil, reduce heat, and simmer until reduced to 2½ cups, about 10 minutes. Season with salt and remove from heat. Let cool slightly.

Heat oil in a large nonstick skillet set over medium heat. Add breadcrumbs and cook, stirring, until beginning to brown, about 2 minutes. Transfer to a bowl, let cool, then add pine nuts and parsley. Season with salt and pepper.

Preheat oven to 375 degrees Fahrenheit. Butter a 9-by-13-by-2-inch baking dish and arrange half of vegetables in bottom. Season with salt and pepper, then top with half of cheese. Repeat layer. Pour cream mixture over top.

Cover gratin with foil and bake for 40 minutes. Uncover, sprinkle with breadcrumb topping and continue to bake until topping browns, about 15 minutes longer. Serve.

Raw kale just doesn’t do it for some people, even if it’s been masterfully massaged. When cooked, though, it’s almost like a different vegetable. The bitterness all but disappears and the leaves become much more tender. Though a simple sauté will do, baking the greens into Saveur’s rich gratin with sweet potatoes and fragrant spices is even better. Kale casserole might become the new kale salad.

Directions: Preheat oven to 400 degrees Fahrenheit. Grease an 8-by-8-inch baking dish with 1 tablespoon butter. Smash garlic with the side of a knife, sprinkle with salt, then chop and scrape into a paste.

Combine pasted garlic, kale, potatoes, half-and-half, cinnamon, and remaining butter in a pot. Stir to combine and season with salt and pepper. Mixture should be generously seasoned. Grate in a bit of nutmeg. Bring mixture to a boil over medium-high heat, stirring with a wooden spoon. Cook for 8 to 10 minutes, or until potatoes begin to soften and starch starts to thicken liquid.

Transfer to prepared baking dish and smooth top. Cover with cheddar and bake until deeply golden, about 20 to 30 minutes. Let gratin cool slightly to set, then serve. 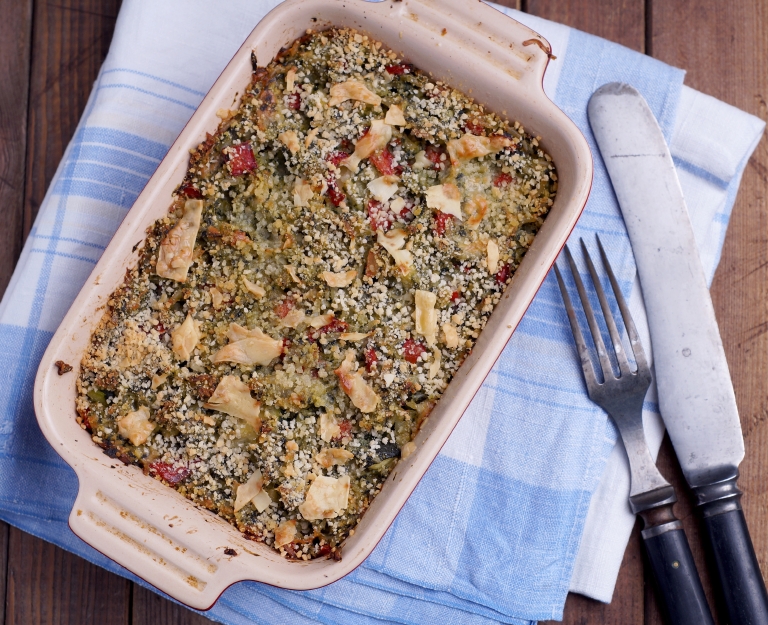 Creamed spinach is already a great side dish for just about any meal. When you turn it into a mushroom-flecked, bacon-topped gratin with this recipe from Melissa’s Southern Style Kitchen, it completely steals the show. Best of all, this recipes uses frozen spinach, which cuts down on a lot of prep work. The only difficult part is exercising patience while the gratin bakes.

Cook bacon in a large skillet set over medium-high heat until fat renders and bacon crisps. Remove to a paper towel-lined plate. Pour off all but 3 tablespoons of drippings. Once cool, crumble bacon.

Add mushrooms and onion to same skillet over medium-high heat and cook until softened and starting to brown, about 3 to 5 minutes. Stir in spinach, salt, pepper, crushed red pepper, half-and-half, cream, and half of Parmesan. Stir to combine, then stir in three-quarters of cheddar or Gruyère and all but 2 tablespoons of bacon. Transfer mixture to prepared baking dish and top with remaining cheddar or Gruyère.

In a small bowl, toss panko with remaining Parmesan and melted butter. Sprinkle evenly over gratin, transfer to oven, and bake  until bubbling and top is golden, about 30 minutes. Garnish with remaining bacon and serve. 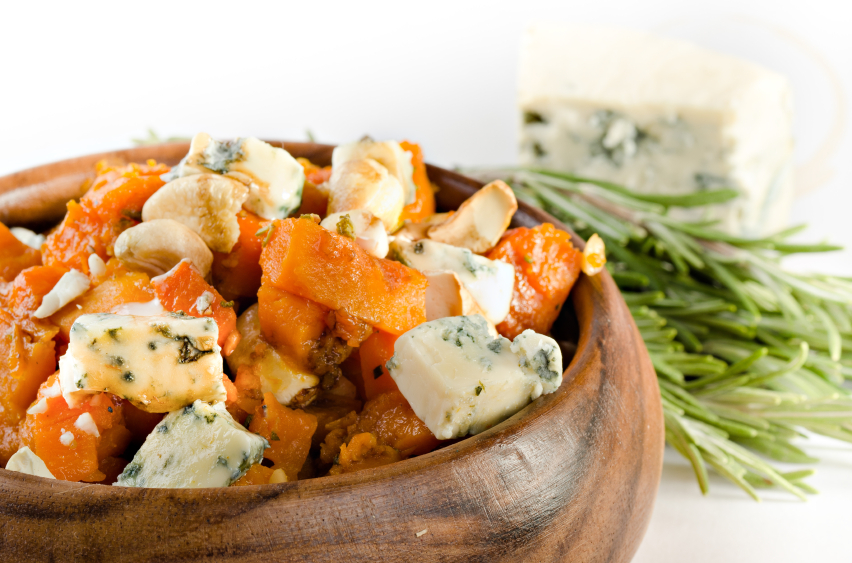 Butternut squash and sage often make their way into ravioli during the winter months. When you’re ready to give pasta a break, try the flavor combo in Cooking Light’s blue cheese-topped squash bake. This comforting dish manages to stay pretty healthy, making it the rare gratin you can feel good about eating.

Directions: Preheat oven to 400 degrees Fahrenheit. Using a steamer or a pot filled with a small amount of simmering water, steam squash until tender, about 10 minutes.

Add bread to a food processor and pulse until coarse crumbs form. Measure out ½ cup of crumbs and transfer to a small bowl. Add 2 teaspoons oil and toss to combine.

Bake casserole for 20 minutes. Sprinkle blue cheese over top and then top with breadcrumbs. Bake until cheese melts and crumbs brown, about 10 minutes longer. Serve.