Thanks to the checks and balances instituted by the Constitution, most presidential powers have limits. But one that doesn’t? The president has a virtually unlimited ability to pardon and commute sentences related to federal offenses, and grant clemency at any point in the legal process. Timeline reports that because presidential pardons only have to follow the president’s own sense of justice, they often become controversial. 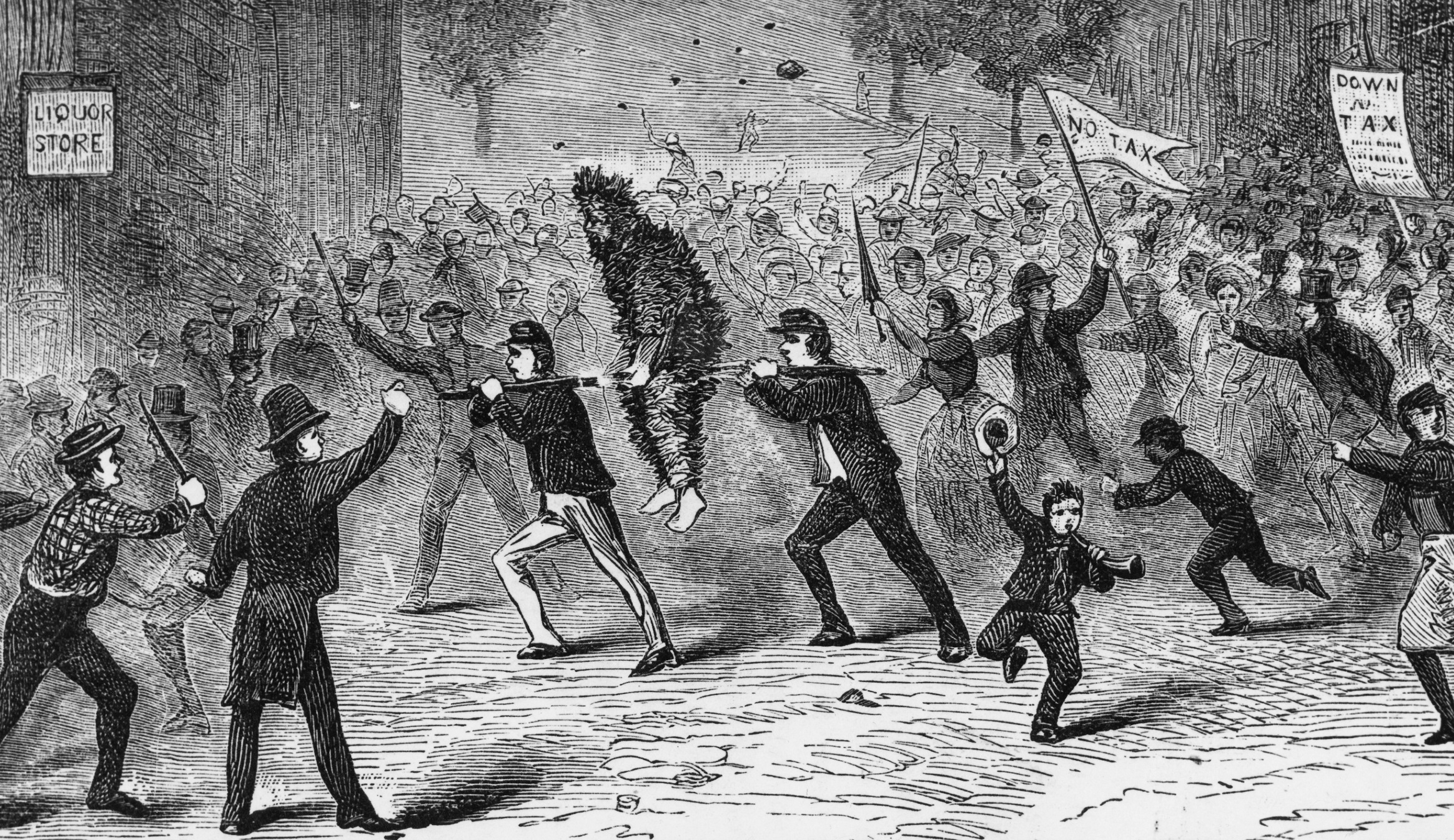 As Time notes, George Washington made the first-ever presidential pardon. In 1791, Congress enacted a steep tax on spirits.  So hard-hit small whiskey producers protested by taking to the streets. They then formed a multi-state armed rebellion.

George Washington called in 13,000 troops to quell the protest. The government charged the rebel leaders with treason. But it released many due to a lack of evidence. Only a few men had trials, and two got treason convictions. But Washington eventually pardoned them, issuing the first presidential pardon in American history. 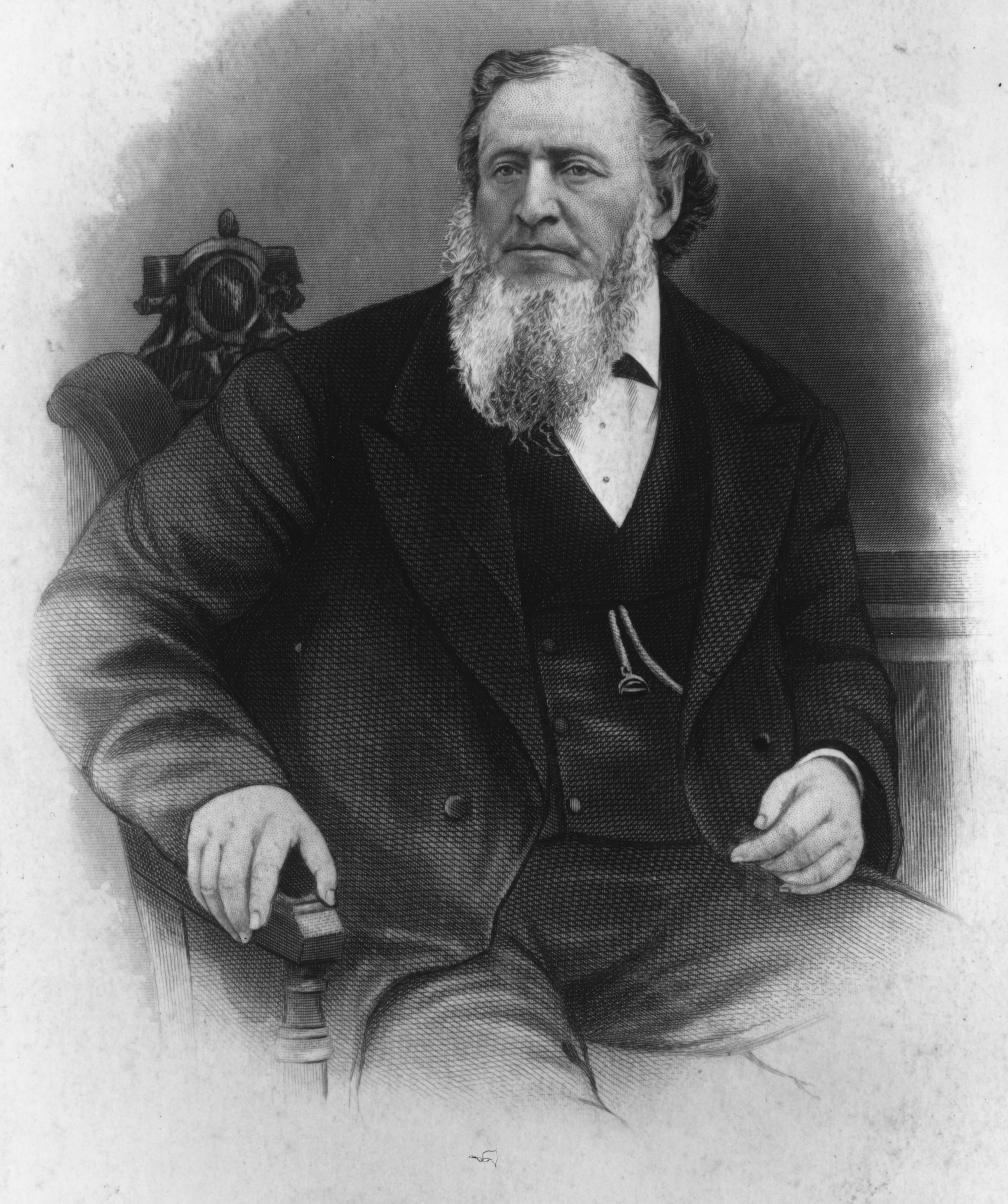 There was a year-long standoff with the U.S. army. | Hulton Archive/Getty Images

Timeline reports that Brigham Young, an early leader of the Mormon Church, developed a reputation “as an autocrat and resistant to federal authority.” That caught the attention of the newly inaugurated president, James Buchanan. Buchanan grew worried that Young would turn Utah into a theocracy.

The president dispatched an army expedition to retake control of the territory. Yet Young’s followers began a year-long standoff with the U.S. Army. That even involved a massacre that took 100 lives. But later, as part of a peace compromise, Buchanan gave Young and his followers a full pardon.

Next: Andrew Johnson pardoned these people associated with the Confederacy.

3. Citizens of the Confederate states 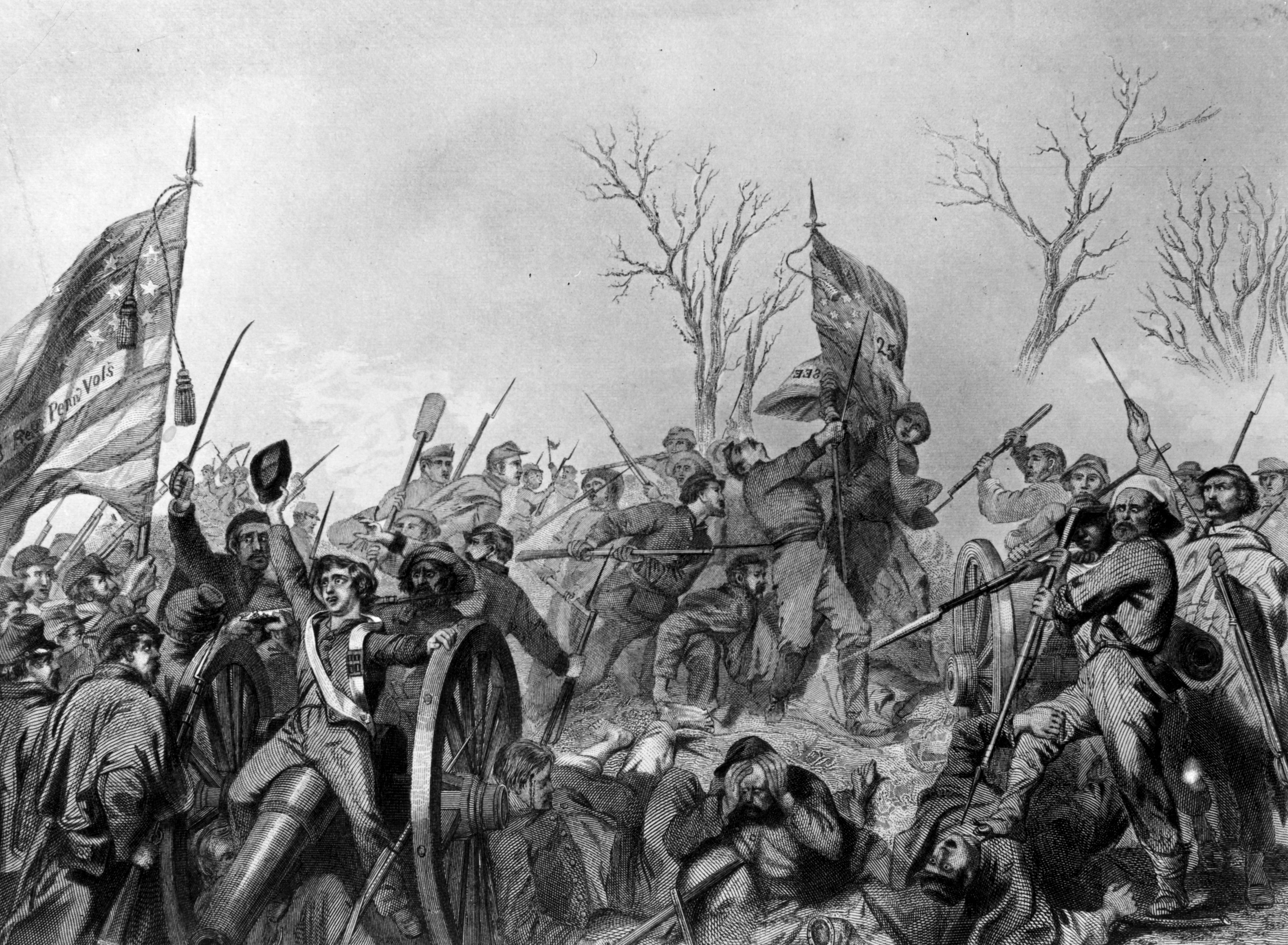 He pardoned the Southern states as long as they swore loyalty to the Union. | Hulton Archive/Getty Images

Next on the list of the most controversial presidential pardons? Andrew Johnson’s pardon of citizens of the Confederate states. Johnson took office on the day that Abraham Lincoln died of gunshot wounds. And he forward with reconstruction — even though he undermined the effort as he went.

According to Time, Johnson pardoned southerners in the Confederate states “on the condition that they would take an oath of loyalty to the Union.” However, he wouldn’t grant blanket amnesty to several groups of people. Leaders and wealthy men, for instance, had to “obtain their own special presidential pardons.” (Likely because Johnson grew up poor and disliked the wealthy.) 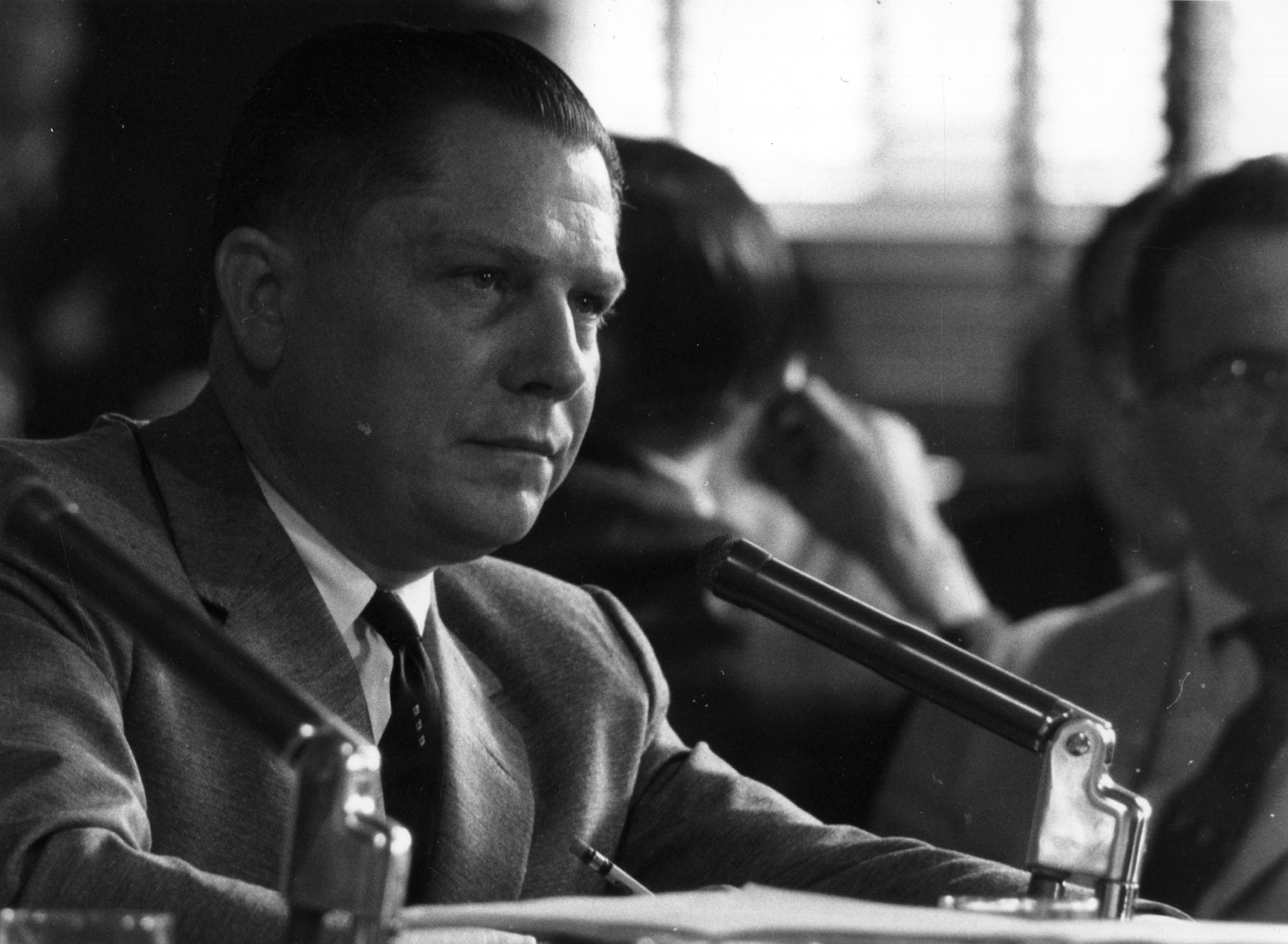 He disappeared in 1975 and was never found. | Keystone/Getty Images

Jimmy Hoffa served as president of the International Brotherhood of Teamsters union. Time reports that Hoffa had begun serving a 15-year sentence for jury tampering and fraud. But Richard Nixon pardoned him in 1971. As Time notes, the pardon came with one condition.

Nixon specified that Hoffa should “not engage in direct or indirect management of any labor organization” until at least March 1980. But as Time notes, it seems that “Hoffa was trying to reassert his power over the Teamsters, defying Nixon’s requirement, when he disappeared in 1975.” 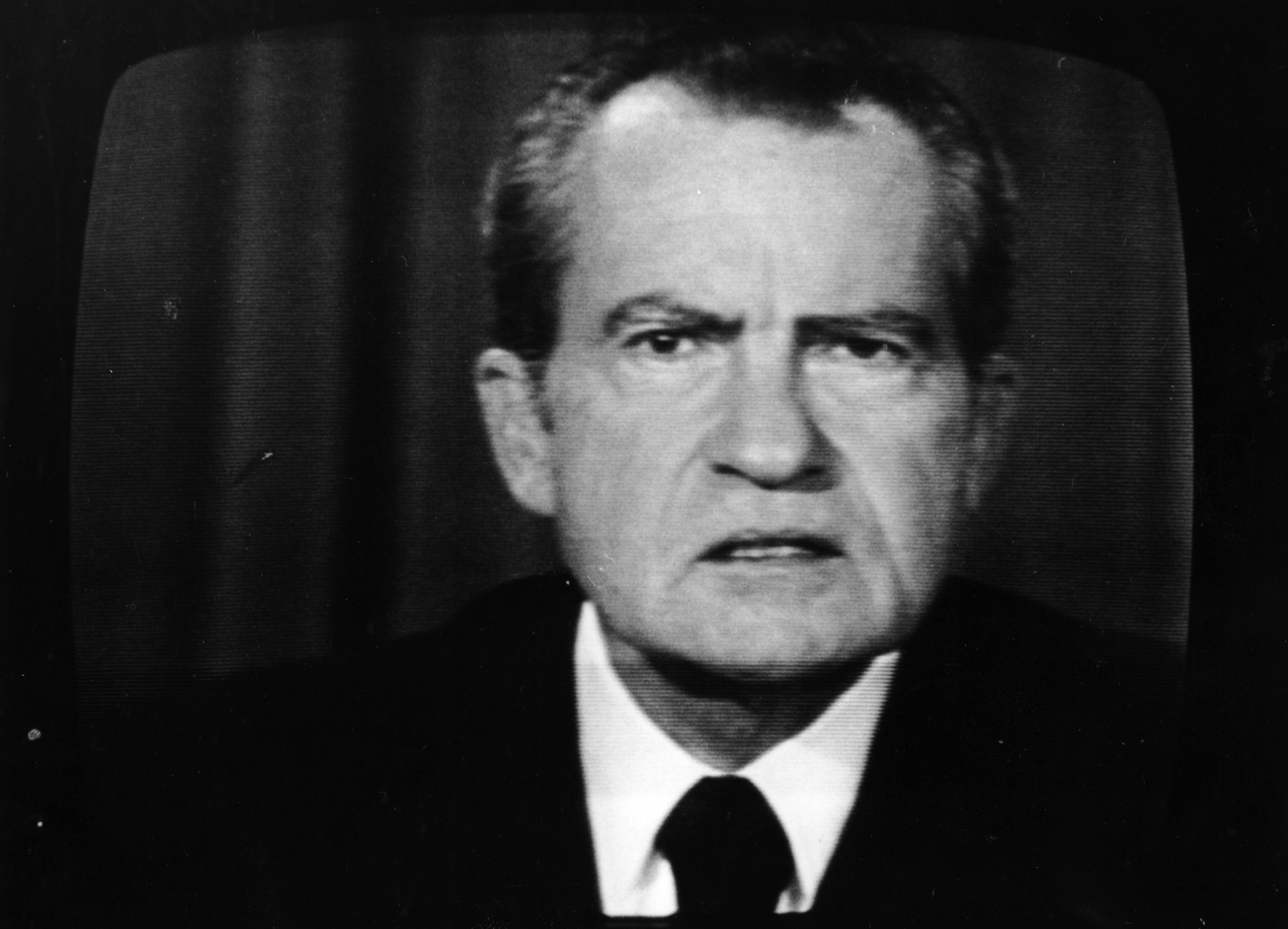 He was seen to have pardoned Nixon too soon. | Keystone/Getty Images

Gerald Ford’s 1974 pardon of Richard Nixon numbers among the most controversial presidential pardons of all time. FiveThirtyEight notes that this act of clemency infuriated Americans. It drew criticism because of Nixon’s role in the coverup of the Watergate burglary, of course.

But it also infuriated some Americans because Ford pardoned the former president only a month after Nixon had resigned. As Timeline reports, Ford said that Nixon had “suffered enough.” But Time notes that many people cite the pardon as the reason why Ford lost the 1976 election to Jimmy Carter.

Next: Jimmy Carter fulfilled a campaign promise to issue this pardon. 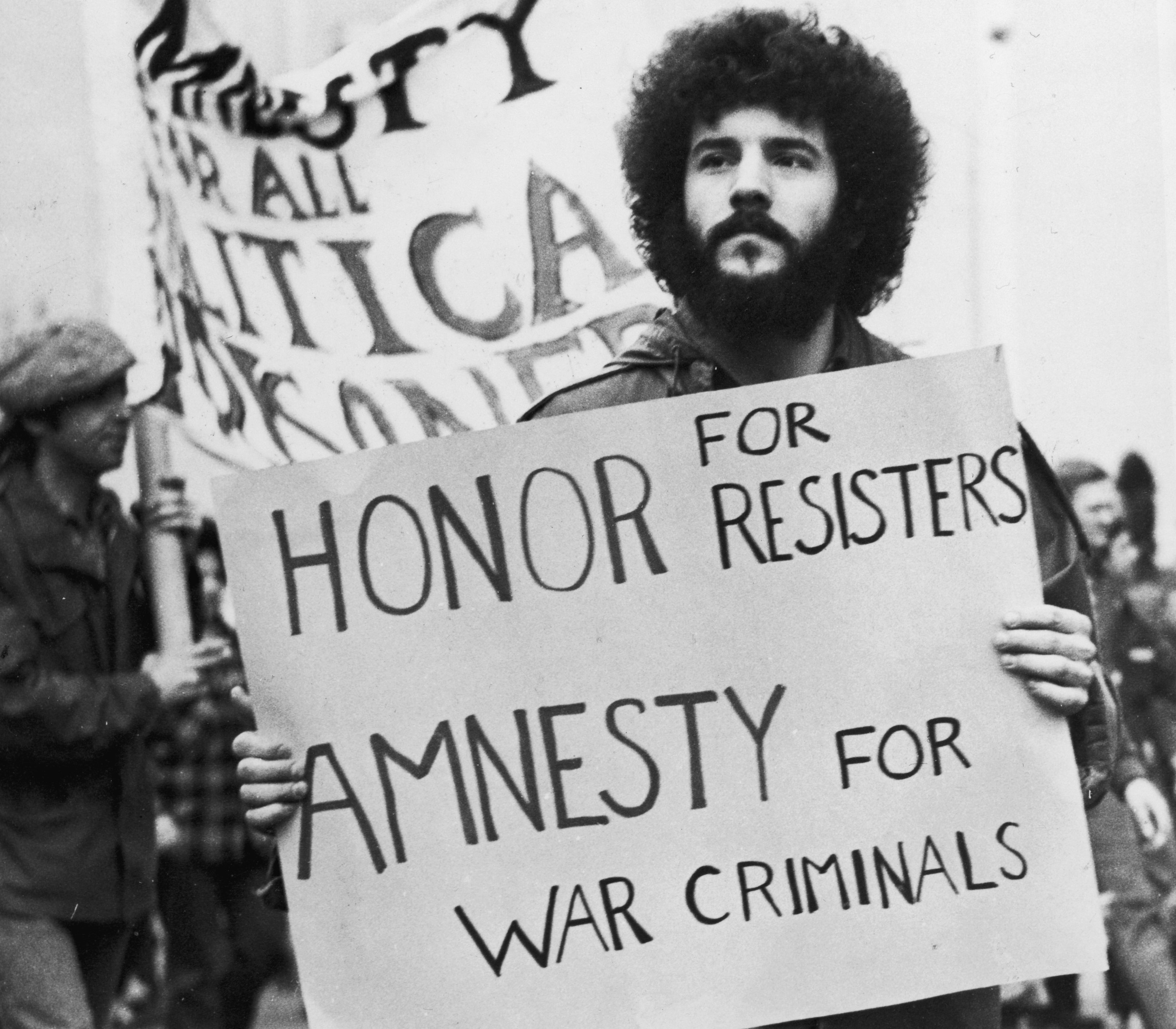 Many presidents waited to offer presidential pardons. But as Time reports, Jimmy Carter made his first pardon the day he moved into the Oval Office in 1977. Carter pardoned hundreds of thousands of men who avoided serving in the Vietnam war. (They did so by leaving the U.S. or not registering for the draft.)

Gerald Ford had introduced conditional amnesty, Time notes. But Carter wanted to “heal the war’s wounds.” So he made no conditions. Yet he did exclude several groups from his pardon, such as deserters, soldiers who received less-than-honorable discharges, and civilians who violently protested the war.

Next: Ronald Reagan pardoned this pair of FBI agents. 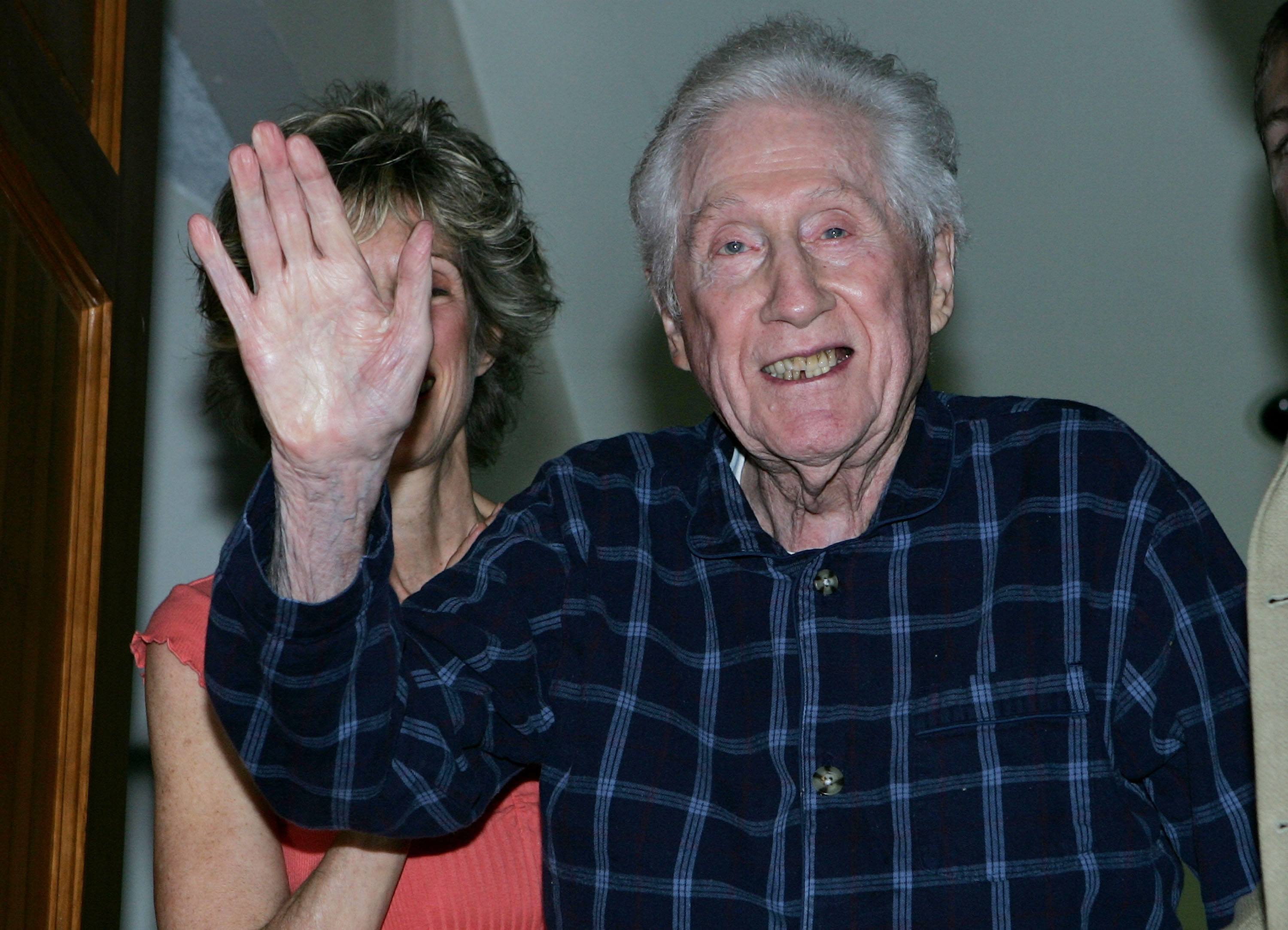 Before he blew the whistle on Nixon, W. Mark Felt ordered agents to break into protesters’ homes. | Justin Sullivan/Getty Images

In 1981, Ronald Reagan granted pardons to W. Mark Felt (the whistleblower “Deep Throat”) and Edward S. Miller. The two FBI agents conspired “to violate the constitutional rights of anti-war radicals in the early 1970s.” Felt and Miller authorized agents to break into the homes of people associated with the Weather Underground. (The group protested the Vietnam war and bombed the Capitol and Pentagon.)

Time reports that the pair had been trying to inform the FBI and Nixon of activities they thought were undertaken by hostile foreign powers. Reagan argued that Felt and Miller had acted “on high principle to bring an end to the terrorism that was threatening our nation.” 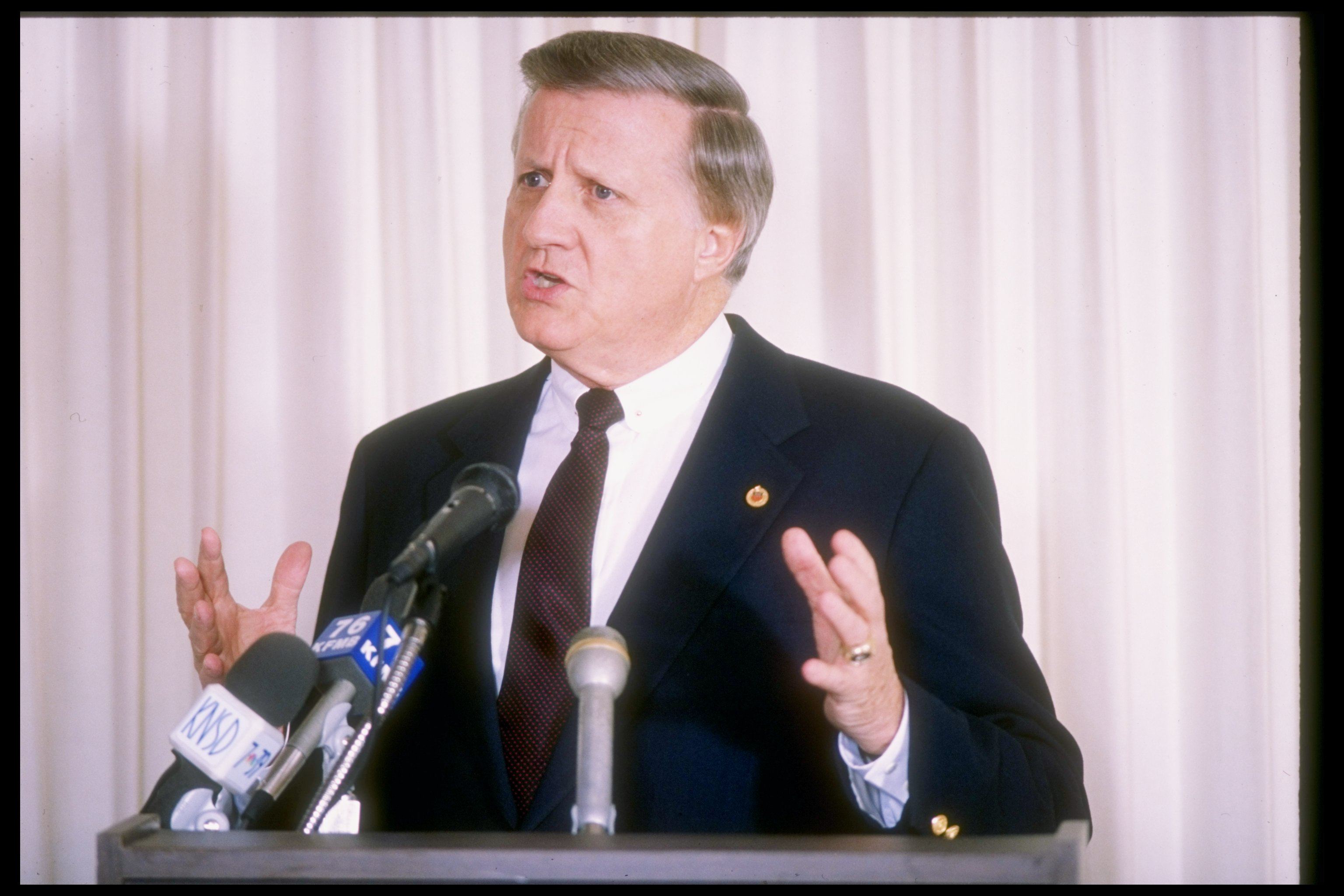 Time explains that “Steinbrenner, a major Republican donor, allegedly knew the money he was donating was not going through regular election procedures.” Reagan, “not wanting to appear soft on crime,” would only pardon Steinbrenner if he admitted guilt. 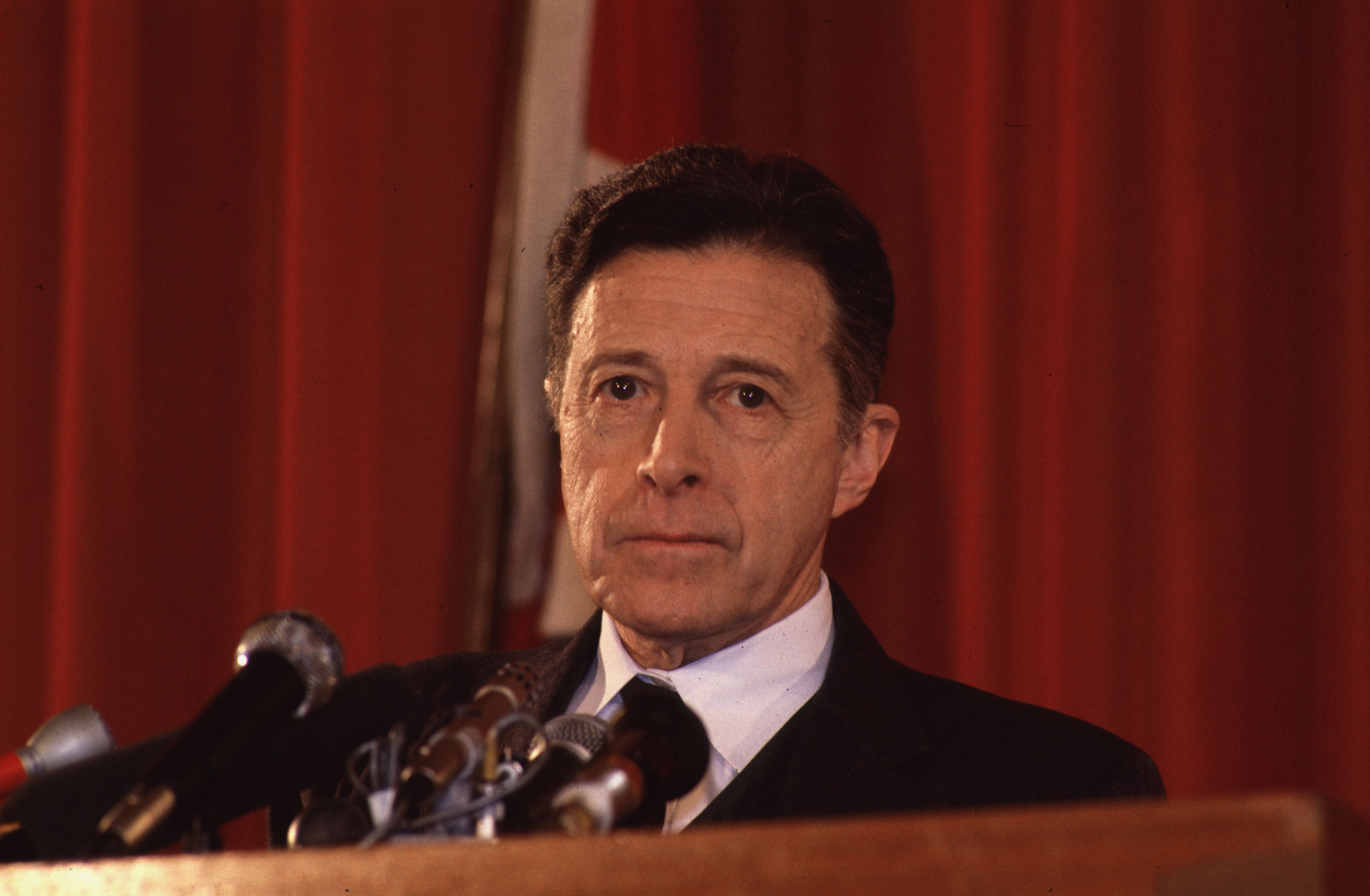 The whole ordeal was a giant coverup. | Hulton Archive/Getty Images

Former Defense Secretary Caspar Weinberger and six other officials participated in the transfer of U.S. anti-tank missiles to Iran. Weinberger was charged with lying to the independent counsel about his knowledge of the sales after his 1987 resignation.

But as Time explains, “the pardon by President George H.W. Bush essentially halted the legal proceedings against Weinberger and his fellow defendants.” Independent counsel Lawrence Walsh disapproved of the pardon. In fact, Walsh said, “The Iran-Contra coverup… has now been completed.”

Next: Bush also pardoned these officials.

10. Officials in the Iran-Contra Affair 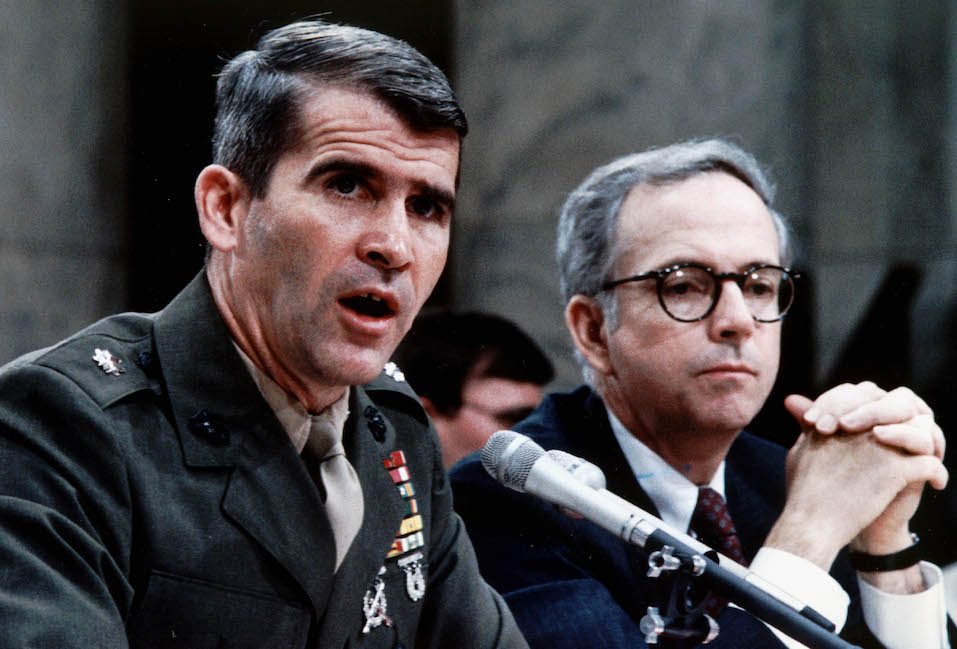 It also made his own life easier. | Chris Wilkins/AFP/Getty Images

FiveThirtyEight reports that in 1992, George H.W. Bush pardoned six Reagan administration officials involved in the Iran-Contra Affair. (In addition to Caspar Weinberger.) As the publication explains, Bush’s decision numbers among the most controversial presidential pardons.

Bush’s decision drew criticism in part because the officials had yet to be convicted or sentenced. Additionally, the pardon halted proceedings against the defendants and against Bush. The court could have asked Bush to testify as a former member of the Reagan administration.

Next: Bill Clinton pardoned this billionaire. 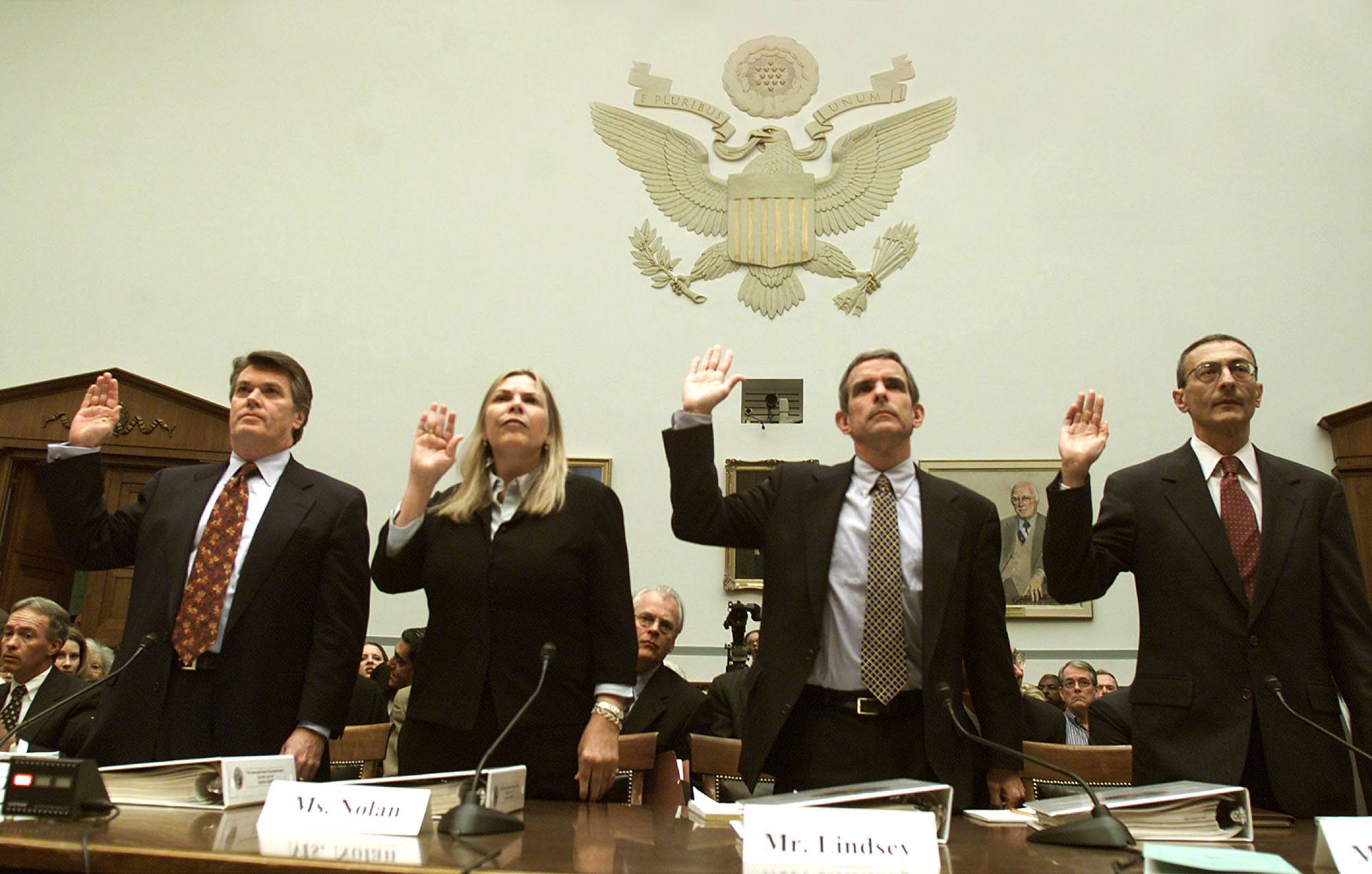 There was even a hearing on the controversial pardon. | Mark Wilson/Newsmakers

As FiveThirtyEight explains, some of the most controversial presidential pardons have involved a president granting clemency to a longtime ally or friend. An easy example? Bill Clinton’s choice to pardon Marc Rich. The billionaire financier (and the ex-husband of a major Democratic donor) evaded more than $48 million in taxes.

Rich fled the country after his indictment on 65 criminal charges. That included 51 counts of tax fraud. And Rich also ran illegal oil deals with Iran during the 1979-1980 hostage crisis. Clinton’s act of clemency infuriated Democrats and Republicans alike. 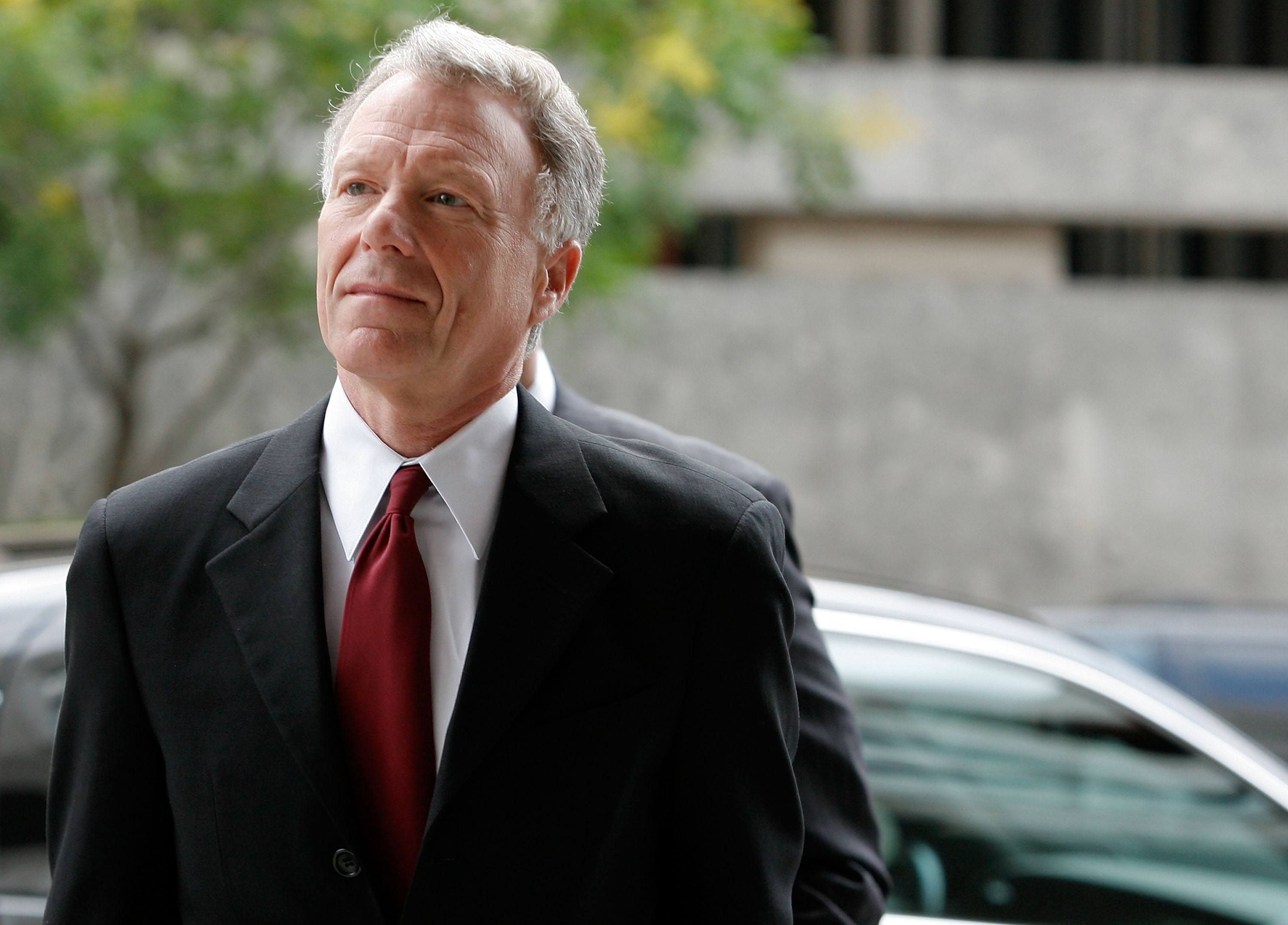 The high ranking official was convicted of a felony. | Mark Wilson/Getty Images

Time reports that George W. Bush didn’t technically pardon former chief of staff to the vice president Scooter Libby. Instead, Bush commuted Libby’s prison term. But that didn’t prevent the pardon from landing on Time’s list of the most controversial presidential pardons in American history.

The court found Libby guilty of perjury, obstruction of justice, and giving false statements to the FBI in the probe of the leaked identity of a CIA operative. Libby became the highest-ranking official to be convicted of a felony since the Iran-Contra affair. And that made this pardon quite controversial.

13. Jose A. Compean and Ignacio Ramos 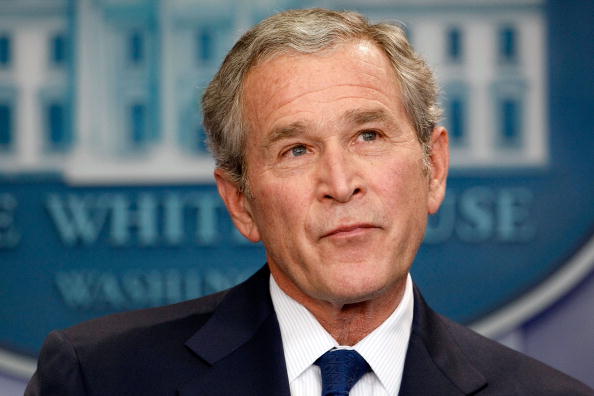 He thought the sentences were excessive.  | Chip Somodevilla/Getty Images

In 2009, George W. Bush commuted the sentences of Jose A. Compean and Ignacio Ramos. The two former border patrol agents had served just two months of an eight-year sentence for shooting an unarmed drug smuggler. Then, they tried to cover up the crime.

FiveThirtyEight notes that Bush said he issued the commutations because he thought the sentences “excessive.” Bush considered them excessive particularly because Compean and Ramos had to stay in solitary confinement for their own protection.

Next: Barack Obama made this very controversial pardon at the end of his presidency. 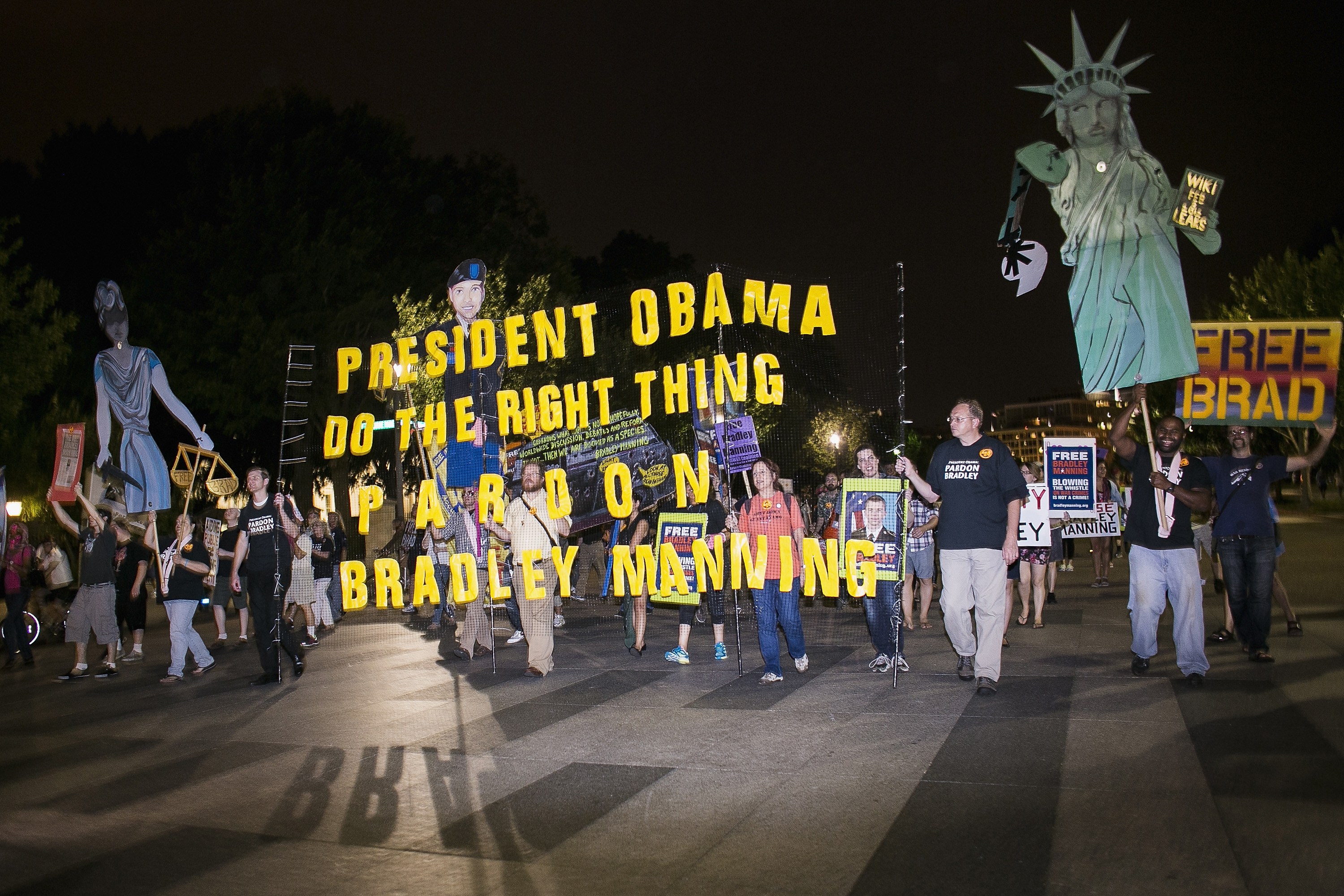 Public support was behind her. | T.J. Kirkpatrick/Getty Images

Barack Obama commuted the sentence of Chelsea Manning. Manning, a former military intelligence analyst, was convicted of stealing 750,000 pages of classified documents and disseminating them to WikiLeaks. CNN noted that Obama made the pardon “over the objections of Secretary of Defense Ash Carter.”

The pardon also created a major controversy during the last days of Obama’s presidency. And as FiveThirtyEight explains, critics of Obama’s decision maintained that Manning’s actions put U.S. lives abroad at risk.

Next: Donald Trump made this controversial pardon early in his presidency. 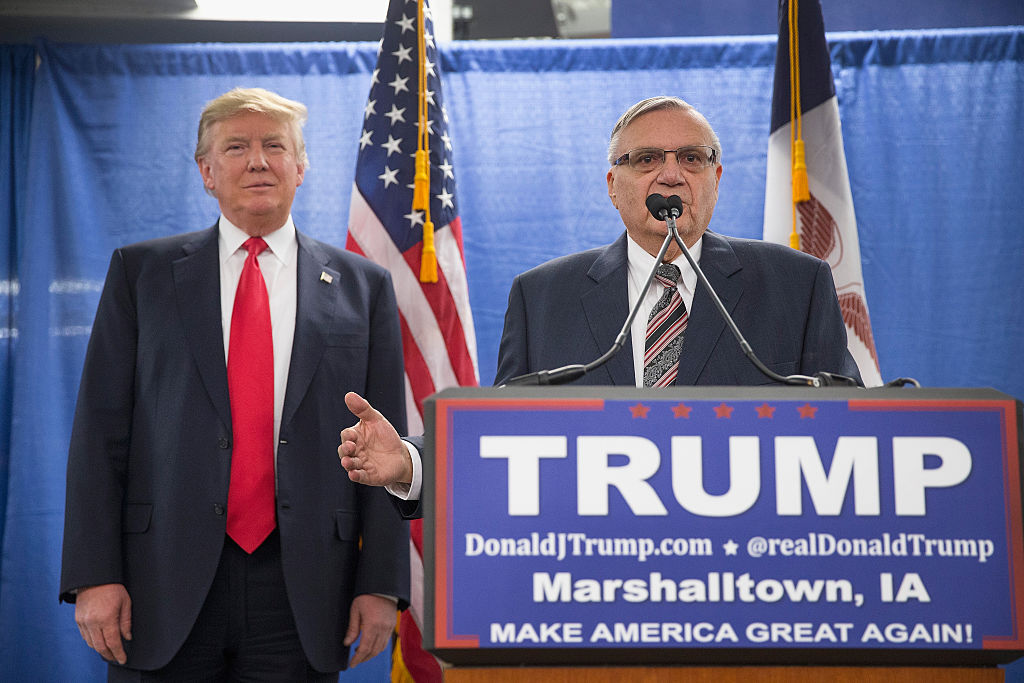 As FiveThirtyEight explains, Donald Trump’s pardon of Joe Arpaio has historical precedents, just not good ones. The publication cites Arpaio’s conviction for “flouting a judge’s order to stop violating Latinos’ constitutional rights” as one of the most controversial aspects of the pardon.

Arpaio was accused of allowing or even promoting inhumane conditions in jails. He also reportedly allowed the physical abuse of inmates. And he was accused of using policing techniques including racial profiling. Additionally, Arpaio created an outdoor jail where thousands of inmates were housed in the Arizona heat and forced to work on chain gangs.

Read more: These Are the Biggest Lies Told by Other U.S. Presidents and How Donald Trump Compares