Cook to Get Cut: 5 Healthy Leek Recipes That Taste Great

The allium family rarely comes to mind when you’re cooking healthy. Garlic, onions, and leeks are usually used as building blocks to add flavor to different proteins and vegetables not as the starring ingredients. Leeks probably get the least use of all, which is a shame. These onion relatives have a mild, sweet taste when cooked. You can substitute them in place of onions for most applications, which is an easy way to shake up some of your regular recipes. They’re also packed with vitamins, and you can dig into an entire cooked cup for just 32 calories. Start giving leeks a little more love with these five recipes. 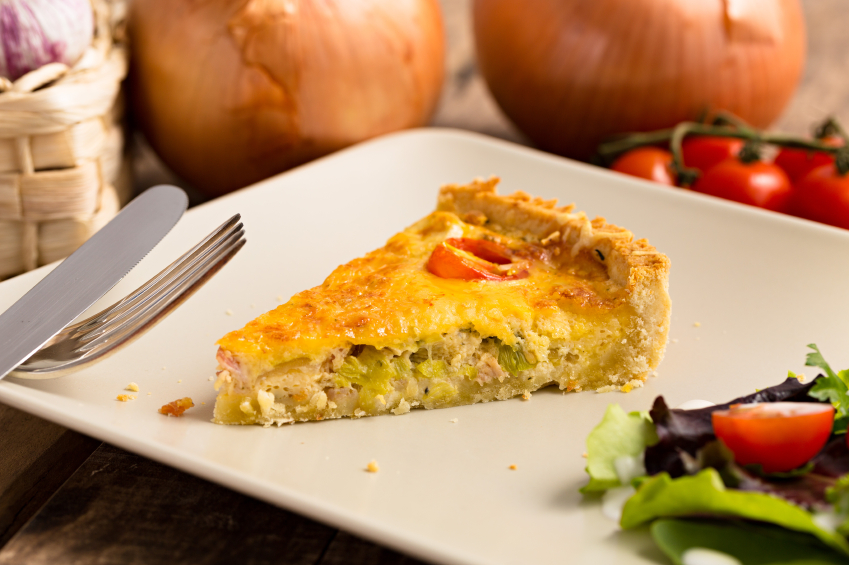 Many frittatas use at least eight eggs to create a substantial dish, so it might seem surprising this recipe from Fine Cooking only contains six. The reason? Loads of leeks. Don’t let the amount scare you off, because the flavor becomes extremely mellow once cooked. A little bit of goat cheese gives this dish a little bit of tang and a creamy texture that tastes decadent without going overboard.

Many people have started working more whole eggs into their diet since nutrition experts gave yolks the green light earlier this year, reasoning they didn’t contribute to high cholesterol. Adding leeks to the equation could actually make the breakfast staple even better for your health. Some studies have found kaempferol, a flavanoid found in leeks, can reduce the risk of cardiovascular diseases and certain types of cancer.

Directions: Position a rack in the center of the oven, and preheat oven to 350 degrees Fahrenheit. Heat 2 tablespoons butter and 1 tablespoon of the olive oil in a 10-inch ovenproof nonstick skillet over medium-high heat. When butter has melted, add leeks and season with salt. Cook, stirring, until leeks are tender and lightly browned, about 6 minutes. Transfer to a plate, and spread into an even layer. Let cool.

In a large bowl, whisk eggs with 1 teaspoon salt and a few grinds of pepper. Add the leeks, thyme, and goat cheese. Stir gently to combine.

Wipe skillet clean, and heat remaining 1 tablespoon butter and 1 tablespoon olive oil over medium-low heat. When butter is melted, add egg mixture and gently shake pan to evenly distribute. Cook until eggs begin to set around edges, about 5 minutes. Gently shake pan to ensure frittata doesn’t stick, using a rubber spatula, if needed. Transfer to oven, and cook until center is set, about 5 minutes. Remove from oven, and let sit for about 2 minutes. Carefully slide frittata onto a serving plate, cut into wedges, and serve. 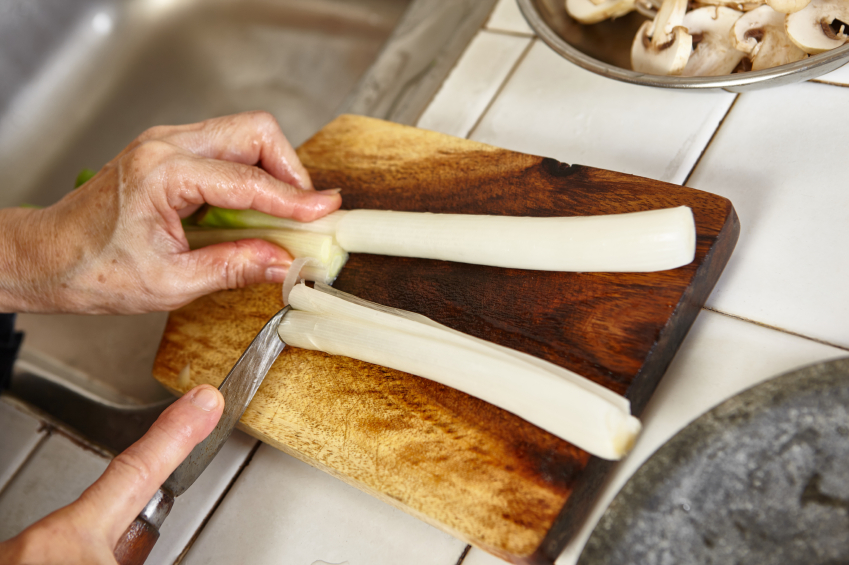 In France, braised leeks are a pretty common dish. Though it might sound weird to eat what’s essentially a pile of onion-like vegetables, this preparation is just as delicious as any other classic French recipe. Try this simple method from strawberryplum to get a taste. We like the little bit of texture the hard-boiled eggs add, but you can leave them out if you prefer. Don’t skip the mustard dressing, though. It’s an easy way to add a good hit of acidity and even more flavor. For a simple dinner, just serve the leeks with some fish and a little bit of crusty bread.

Directions: Preheat oven to 450 degrees. Cut root end off leeks, and remove dark green portions, leaving about 6-inch long sections to work with. Cut each leek in half lengthwise, then rinse under running water, using your fingers to separate layers and remove all grit.

Melt butter in an ovenproof skillet over medium heat. Add leeks, cut-side up, and season with salt and pepper. Cook leeks until lightly browned, about 5 minutes. Add the wine, increase the heat, and cook until most of the wine has reduced. Add chicken stock, and return to a simmer, then immediately transfer pan to the oven. Braise leeks until tender, about 20 minutes.

While leeks are cooking, place egg is a small saucepan with just enough cold, salted water to cover. Bring water to a boil, remove from heat, cover, and let sit for 10 minutes. Transfer egg to ice water until cool. Peel, cut in half, and separate white and yolk. Finely chop both white and yolk, and set aside.

In a small bowl, whisk mustard and vinegar together. While constantly whisking, drizzle in olive oil until emulsified.

To serve leeks, arrange on plates or a large platter. Spoon a bit of the braising liquid on top, then drizzle with vinaigrette, sprinkle with chopped egg whites and yolks, top with parsley, and serve. 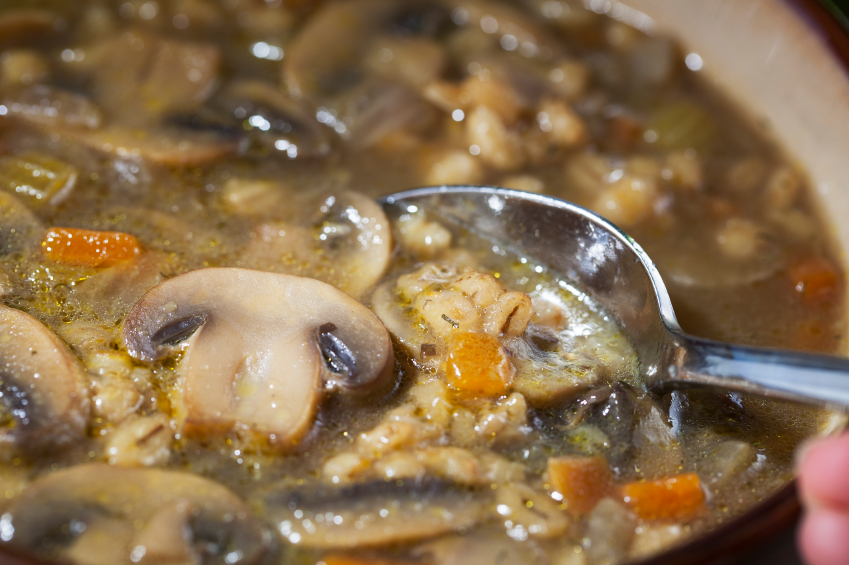 For a meatless meal you’ll actually like, try Bon Appétit’s savory barley stew. You’ll get plenty of meaty flavor from the mushrooms, and the grains will give you a dose of fiber to help keep you satisfied. If you really can’t live without a little bit of meat, start the stew by browning a little bit of Italian sausage.

This recipe should be considered the ultimate dish for bone health, featuring both leeks and kale. These veggies each provide a hefty dose of vitamin K. According to Today’s Dietitian, this nutrient helps activate osteocalcin, a protein that allows bones to absorb calcium. Since vitamin K is fat soluble, don’t skimp on the olive oil in this recipe. You may even want to add a side of whole-wheat bread with a little more drizzled on top.

Directions: Heat oil in a large heavy pot set over medium heat. Add leeks, season with salt and pepper, and sauté until leeks begin to soften, stirring often, about 5 minutes. Add mushrooms, garlic, and rosemary. Increase heat to medium-high and sauté until mushrooms soften and start to brown, stirring often, about 7 minutes longer. Add tomatoes and juices. Cook, stirring, for 1 minute. Add barley and 4 cups of broth. Bring to a boil, reduce heat to low, cover, and simmer until barley is nearly tender, about 20 minutes. Add kale, and stir until wilted, about 1 minute. Cover and simmer until kale and barley are tender, adding broth, ¼ cup at a time, as needed, about 10 minutes. Serve. 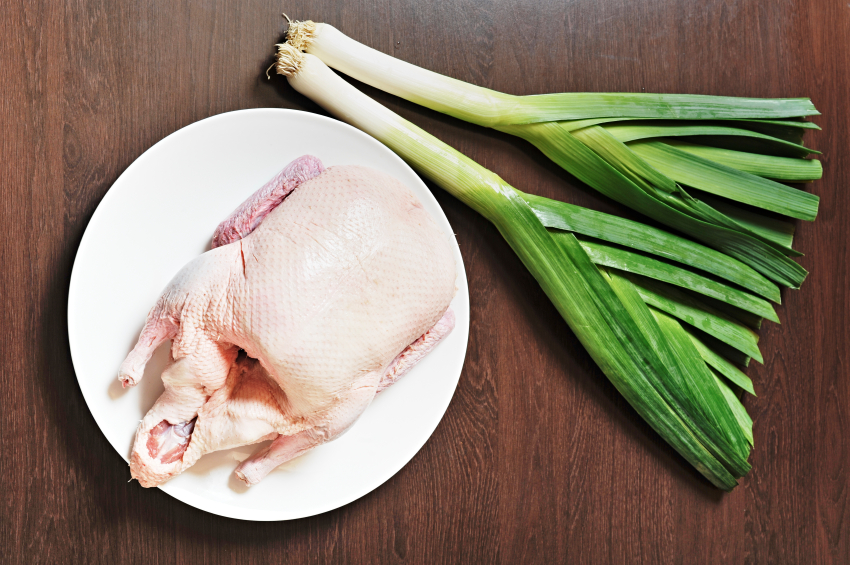 Get the flavor of Sunday dinner — if a faster and less formal format — with Barbara Damrosch’s six-ingredient recipe, which she shared with Food & Wine. Start by cooking the leeks in a little bit of  butter and oil, then use the same skillet to brown the chicken pieces. Add a few sprigs of rosemary, transfer everything to the oven in a roasting pan, and you’ll have an impressive dinner in no time.

Most athletes have embraced the role carbs and protein play in building muscle, providing energy, and aiding recovery. Leeks may soon join them as a key power food. The veggie contains a good dose of quercetin, a type of flavanoid. One 2010 study conducted at the University of South Carolina found athletes given regular doses of quercetin experienced a boost in VO2 max and endurance compared to the control group. Keep in mind, it’s a small study, so more research is needed.

Directions: Preheat oven to 450 degrees Fahrenheit. Melt 1 tablespoon butter with 1 tablespoon olive oil in a skillet over medium-high heat. Cook leeks, turning, until browned in spots, about 6 minutes. Transfer leeks to a 9-by-13-inch baking dish. Season with salt and pepper. Roast for 10 minutes, or until beginning to soften.

Wipe out same skillet, and melt remaining butter into remaining olive oil. Season chicken with salt and pepper. Add chicken and rosemary sprigs to skillet, and cook until chicken is browned, about 10 minutes. Place chicken on top of leeks, skin-side up, and add rosemary. Roast 20 minutes, or until chicken is cooked through and leeks are tender. Serve. 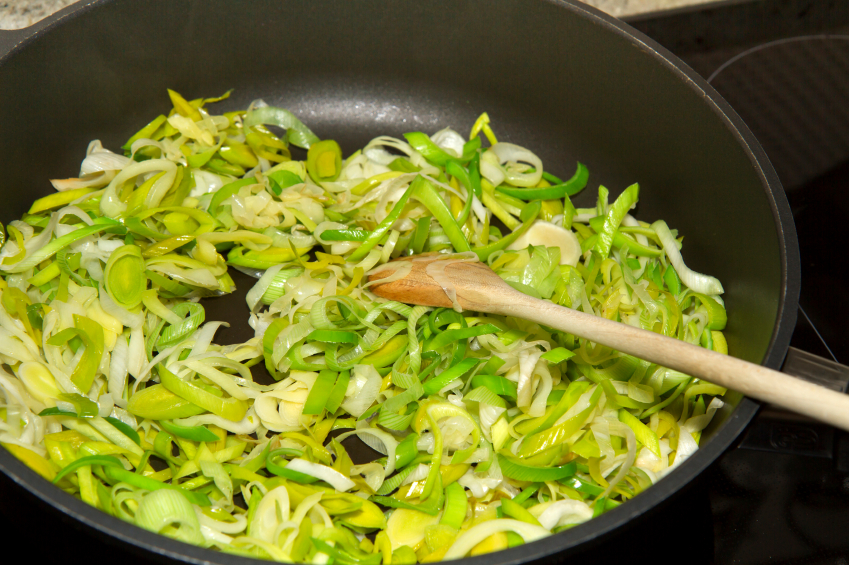 Some guys could happily drizzle Sriracha on every meal. This shrimp and leek stir-fry from Edible Feast is the perfect recipe for them as it uses a fair amount of the spicy condiment to build a flavorful sauce. We particularly like this dish because it makes use of the darker leek tops. Most recipes simply discard this portion of the vegetable, so it’s a great way to get a second use out of your leeks.

If promise of great taste alone isn’t enough to get you to make this dish, consider your health. Though tea is usually touted as the best way to load up on antioxidants, allium vegetables are loaded with the cancer-fighting compounds as well. Some studies suggest eating foods from the onion family, including leeks, could help reduce the risk of prostate cancer.

Directions: In a small bowl, mix all sauce ingredients to combine. Heat a large wok or skillet over medium-high heat. Swirl oil around pan, and add leeks, spreading into a single layer. Cook without touching until they begin to wilt and brown around the edges, about 2 minutes. Stir, and continue cooking until leeks are tender, about 2 to 3 minutes longer. Add garlic and ginger, stirring to prevent burning. Add shrimp, and cook until both sides are pink, 3 to 4 minutes. Pour in sauce, and toss until coated. Remove from heat, and serve.