Making your partner dinner is a great way to show your appreciation for him or her or curry (pun intended) their favor. Follow our Date Night dinner series week-to-week, as we highlight recipes that are as simple to execute as they are tasty.

When it comes to Hannukah, besides the whole seven days of presents thing (Ah, childhood), there are few things that evoke warmer memories than a stack of delicious latkes. But the frozen varieties at store can be loaded with excess sodium, additives, and even icky preservatives. And when you make ‘em at home, they can be fried up with too much fat and loaded with empty calories. That’s why we decided to reach out to HelloFresh this week, a leader in the meal delivery kit game, which provides fresh, wholesome ingredients to your door for tasty, nutritious meals, for their favorite spin on healthier potato latkes.

Behold: Potato Latkes & Marinated Beet Salad with Sour Cream, Apples, and Chives, from HelloFresh‘s Chef Freida Hirsch. Freida says, “Crispy potato latkes are almost as fun to make as they are addicting. Topped with cool sour cream, a slice of apple, and a sprinkling of chives, these are some fancy potato pancakes. Marinating beets with red onion and sherry vinegar brings a refreshing bite to the salad.” Whether you’re Jewish or not, you’ll love doling out a piping hot plate of these tasty, filling pancakes. 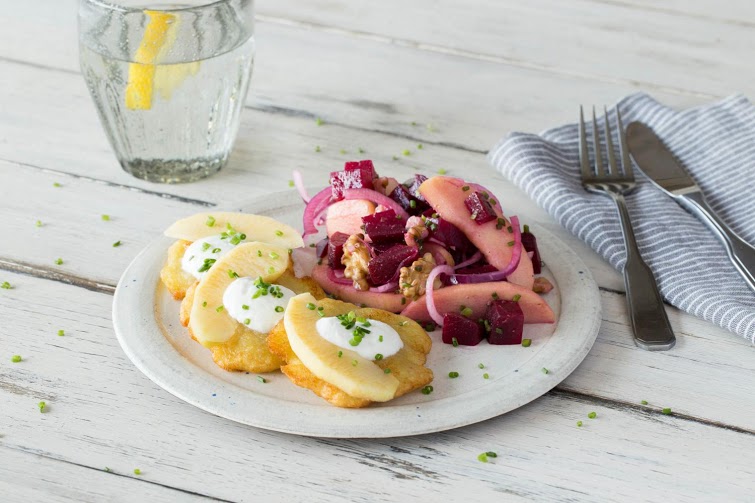 Preheat oven to 400 degrees Fahrenheit. Halve the beets, then slice into wedges. Halve, peel, and thinly slice half the onion. Thinly slice the chives. Peel the potatoes. Working over a large kitchen towel, shred the potatoes using a box grater (or food processor, if you have one). Grate the remaining onion with the box grater into the pile with the shredded potatoes.

Season the potato-onion mixture with salt and pepper. Bring in the corners of the kitchen towel, and, working over the sink, squeeze the mixture firmly to remove excess liquid. Repeat a few times until nearly dry. Transfer the potato-onion mixture to a bowl and toss with the flour. Marinate the beet salad; toss the beets in a medium bowl with the sliced onion, walnuts, sherry vinegar, half the chives, and a pinch of salt and pepper.

Make the latkes: Heat ½-inch of oil in a large pan over medium-high heat. You’ll know the oil is hot enough when it moves fluidly in the pan and shimmers slightly. Place a baking sheet lined with paper towels to the side of the stove. Form the potato mixture into 2-inch patties and place carefully into the oil. You’ll need to work in batches to you don’t crowd the pan!

Cook the latkes 3-4 minutes per side, lowering heat if necessary, until deeply golden brown. Set finished latkes aside on the paper towels to drain, then remove the paper towel and transfer to the oven to keep warm until the rest of the latkes are ready. Season the latkes with salt and pepper before serving. Peel, core, and thinly slice the apple. Toss ¾ the apple slices into the marinated beet salad. Plate the latkes and marinated beet salad. Top each latke with a slice of apple, a dollop of sour cream, and a sprinkle of chives. Enjoy!