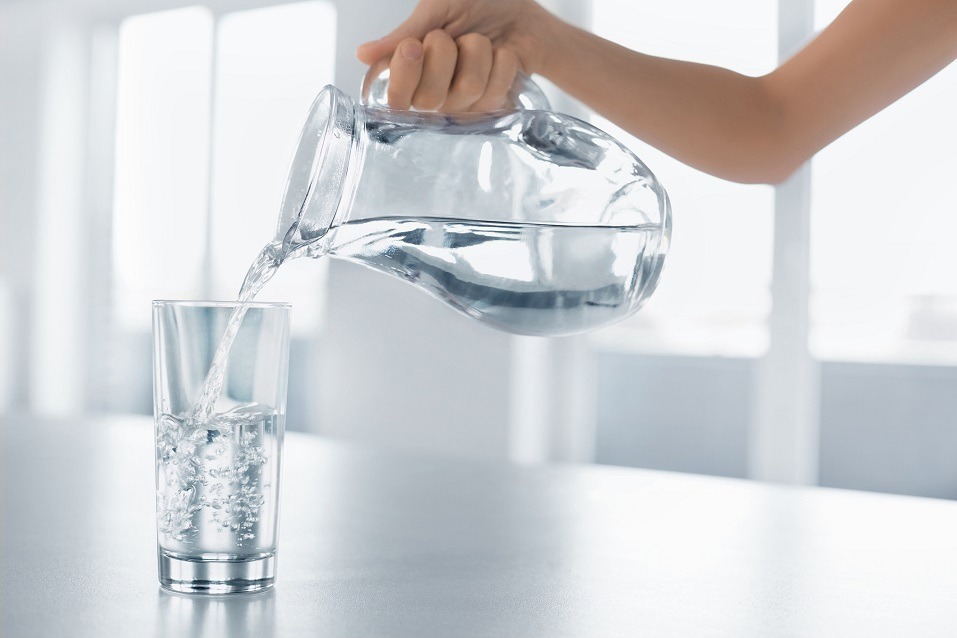 The spotlight placed directly upon the water crisis in Flint, Michigan, spurred national debate over environmental injustice. Tests uncovered unprecedented levels of lead in the drinking water so high it claimed 10 lives and provoked countless other illnesses. Flint is currently the most notorious U.S. location with tainted drinking water, but it’s not the only place with water problems in the country. Follow up testing from Reuters countrywide found nearly 3,000 areas with poisoning rates much higher than Flint, including Baltimore, Cleveland, and Philadelphia.

Now, a recent study done by the Environmental Working Group proved that America’s contaminated water problem is not only bigger than Flint, but way more involved than just “lead in the water.” In fact, virtually every public water system in the United States is polluted with multiple harmful chemicals. More than 250 contaminants were detected by almost 50,000 water utilities nationwide. Although it’s virtually impossible to rank all 50 states from “best” to “worst” in water quality (the state rankings vary with each contaminate), we can shed a much-needed light on the dangerous contaminates that are most prevalent in your drinking water across the country.

And you’ll want to pay attention. These 15 deadly contaminates were found in nearly every state and pose cancer, birth defects, and diabetes threats to millions of Americans. Read on for a breakdown of these chemicals, the cities they reside in, what it means for locals in the area.

Overexposure to chloroform in your drinking water could lead to cancer and other debilitating problems during pregnancy. Even animals who ingest this contaminant are at risk of infertility and birth defects. While chloroform is part of the disinfection formula used to prevent water diseases, it has potential to react badly with other particles and become harmful to humans once ingested. The five states with the largest chloroform prevalence is California, Texas, New York, Illinois, and Pennsylvania. Even popular cities like Steamboat Springs and Fort Carson, Colorado tested positive for chloroform in their drinking water.

Next: If your water taste like rust, you could be ingesting this chemical. 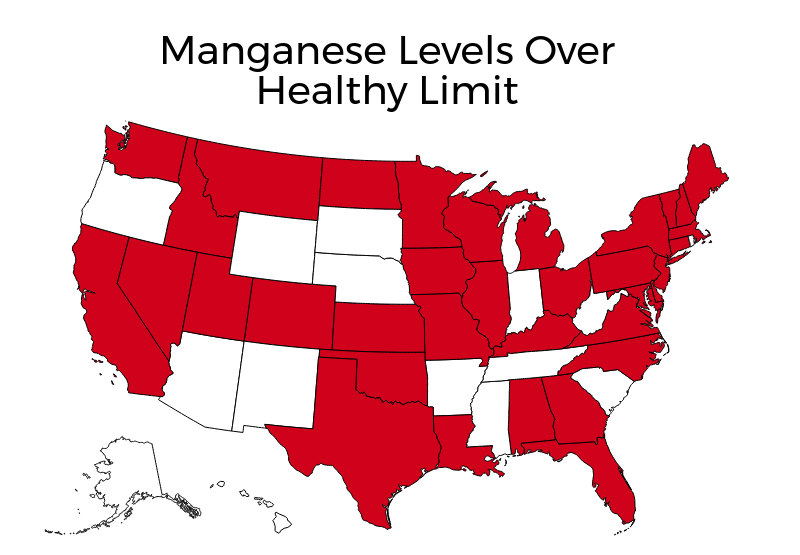 Small amounts of manganese are necessary for health, but excessive amounts can turn harmful. Manganese targets the brain and nervous system, so exposure during pregnancy can impair learning, memory, and behavior in children. There’s a non-enforceable guideline suggesting water companies keep levels below 50 parts per billion (ppb) to avoid rust-like water tastes and stains to your clothes.

Nonetheless, the Environmental Working Group’s tap water database found California, Minnesota, and Illinois have significant utilities with drinking water above recommended guidelines, and the cities of Napa, California; Pleasant Valley, New York; and Sulphur, Louisiana; all had levels in excess of 1,600 ppb.

Next: A chemical common in the Midwest 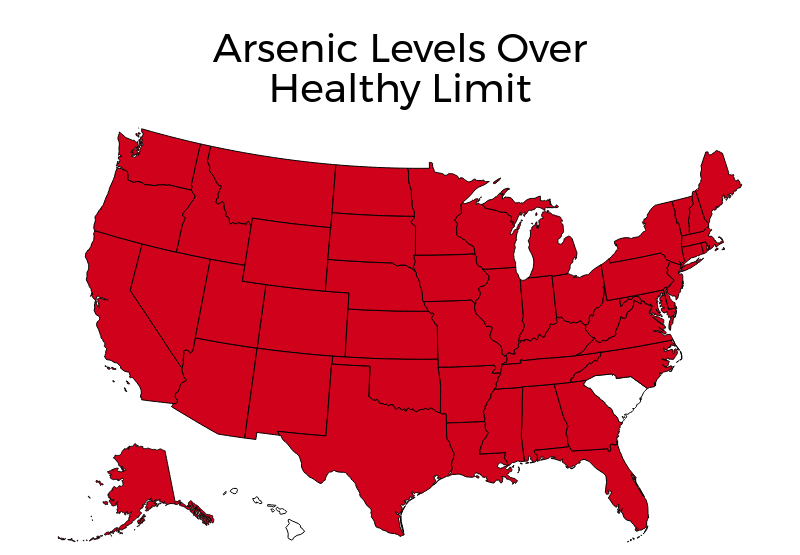 The Environmental Protection Agency lowered the 2001 arsenic standard from 50 ppb to 10 ppb after realizing the dangers of arsenic overexposure were more severe than originally thought. Its prevalent in nearly every state as sources span from power plants and fossil fuels to fruits, vegetables, and rice-based foods. It was even used as a pesticide until the Food and Drug Administration banned the practice.

Although most common in Midwestern states, the Environmental Working Group found major utilities in Texas, California, and Arizona in violation of standard levels. Residents should monitor their drinking water as arsenic is linked to cancer, heart disease, stroke, and diabetes.

Next: A contaminate linked to cancer 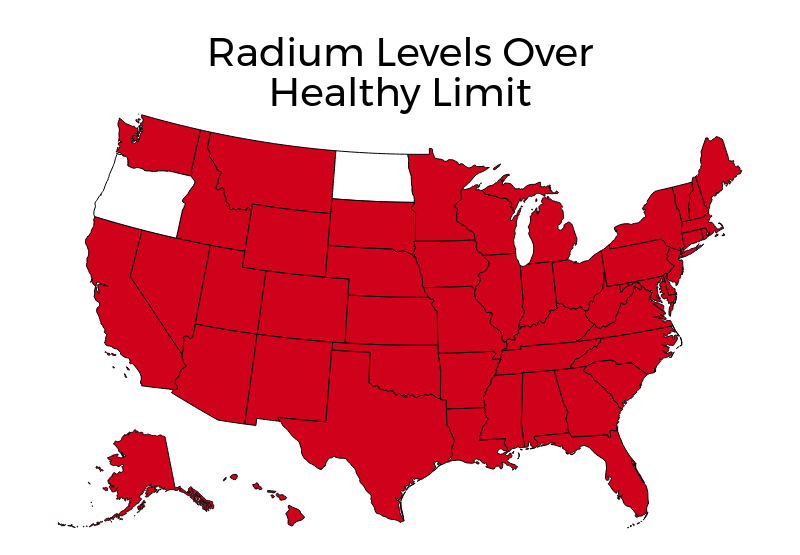 Radium is present in most every state across the country except Montana and North Dakota in some way shape or form. But radium-226 outshines the others forms, as nearly 14,000 utilities had radium detected in their water. This is dangerous as the contaminate causes bone, lung and, organ tumors as well as leukemia, and skin and blood damage. The EPA reports that 1 in every 10,000 will contract cancer as a result of radium ingestion.

Next: A byproduct of chlorinated water 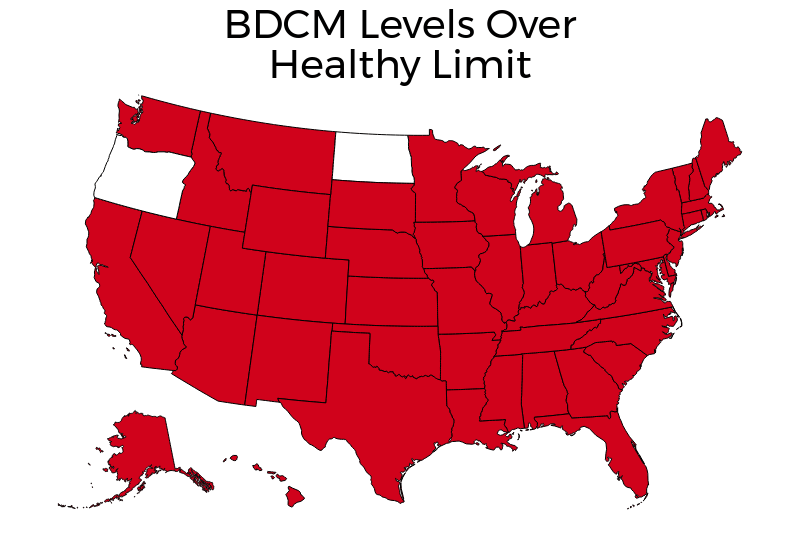 Humans are often exposed to bromodichloromethane by drinking chlorinated water, which is formed from disinfectants used to treat drinking water. Like many chemicals on this list, BCDM is attributed to cancer and possible harm to child reproduction, growth, and development. High levels of BCDM turn up in every state but Oregon and Arizona. Large utilities serving thousands of people in Duncan and Altus, Oklahoma, as well as Fredericktown, Pennsylvania, reported the highest levels of BCDM.

Next: Countless water utilities have levels of this chemical that go well beyond safe limits 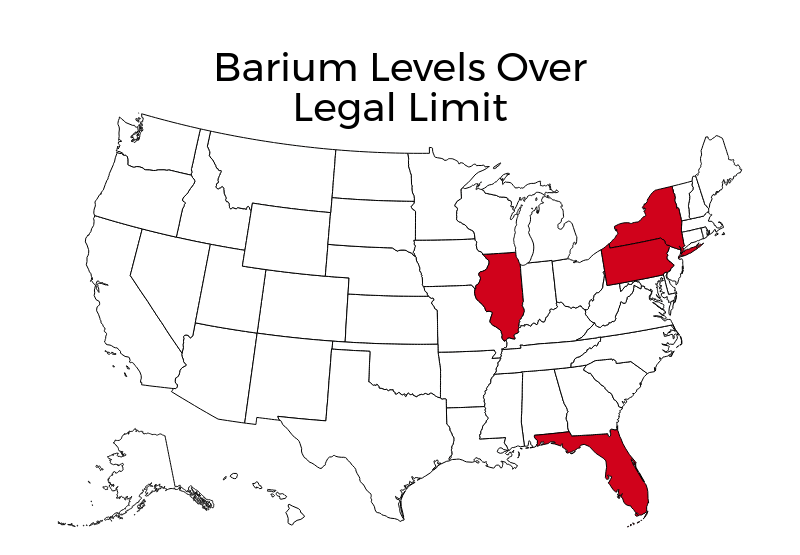 Odds are high that barium is flowing through your drinking water right now, according to Environmental Working Group findings. Exposure is linked to cardiovascular disease and hypertension. While the EPA recommends a limit of 700 ppb, numerous water sources current possess levels much higher than what’s considered healthy.

Next: A fertilizer in your water 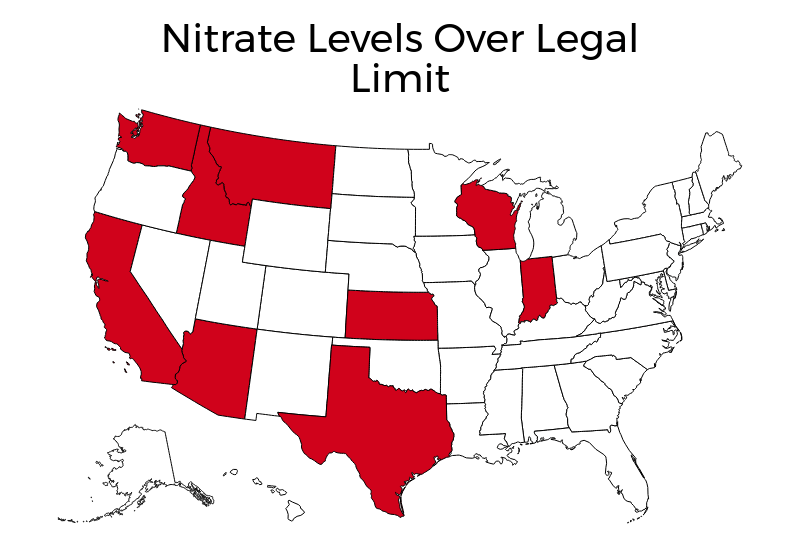 Used as a fertilizer, nitrate is one of the most common contaminates present in U.S. drinking water today. Rural areas see higher levels of nitrate thanks to agricultural farms while urban contamination comes from sewage and treatment plants. Safe levels are present in common foods such as cured meats and root vegetables, but unsafe levels lead to thyroid cancer and reproductive defects.

The Environmental Working Group located various cities in Texas and California and labeled the most water sources “contaminated” with high nitrate levels there. However, South Dakota and New Mexico offer the cleanest nitrate-free drinking water.

Next: The first of many contaminates found in all 50 states 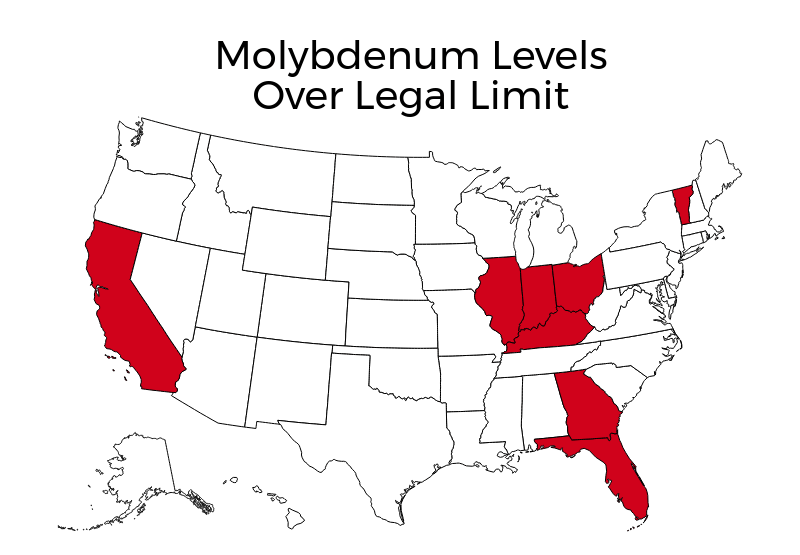 Molybdemum is the first of eight harmful contaminants found in drinking water across all U.S. states. Levels of more than 40 ppb can lead to increased levels or uric acid and gout. The utilities where contamination is most widespread is Illinois, Florida, Texas, and California — all of which provide drinking water to upward of 10 million people. Residents in California City, California; Marion, Illinois; Owensboro, Kentucky; and Punta Gorda, Florida should acknowledge a possible molybdemum presence and take actionable steps to filter water.

Next: A threat to expecting mothers 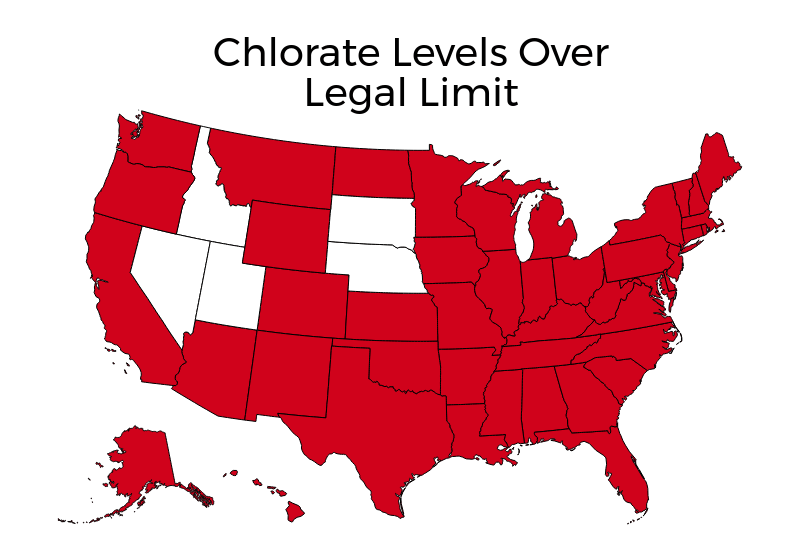 Chlorate impairs thyroid function, making exposure most harmful during pregnancy and childhood. Still, there is no national drinking water standard to regulate the chemical. California is one state that’s struggled to regain control of chlorate levels in their water, but New Jersey, Florida, Texas, and New York are also common violators of safe drinking water.

The Environmental Working Group concluded that Ormond Beach, Florida, utilities tested at the highest average level of chlorate: a whopping 2,530 ppb. The recommended health guideline is much lower at just 210 ppb.

Next: A chemical popular with dentists 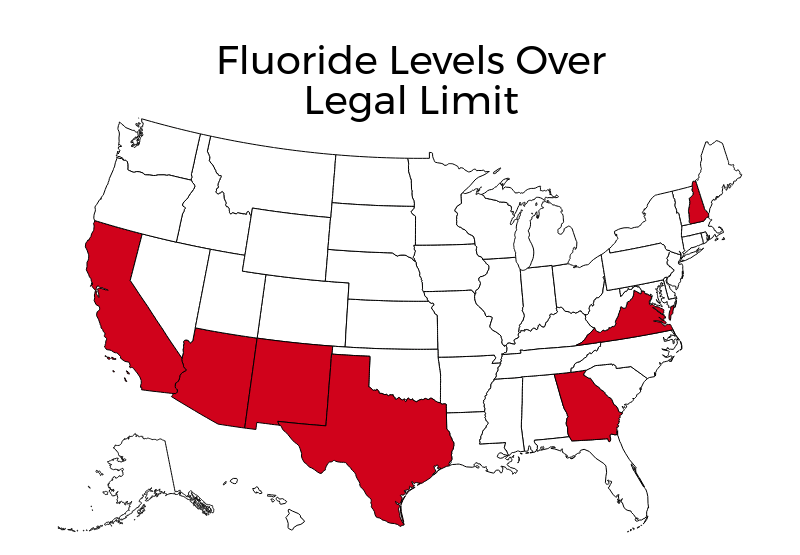 Most Americans know fluoride as a chemical dentists use to clean teeth and prevent tooth decay. But increased exposure over time beyond standard dental treatments could offer the inverse affect, harming your teeth and bones. Unfortunately, water with unsafe levels of fluoride are found in over 18,000 utilities nationwide, reaching over 209 million people in all 50 states. The cities of Fort Irwin, California; Andrews, Texas; and Conway, South Carolina tested consistently high for Fluoride.

Next: A harmful chemical also found in lobster 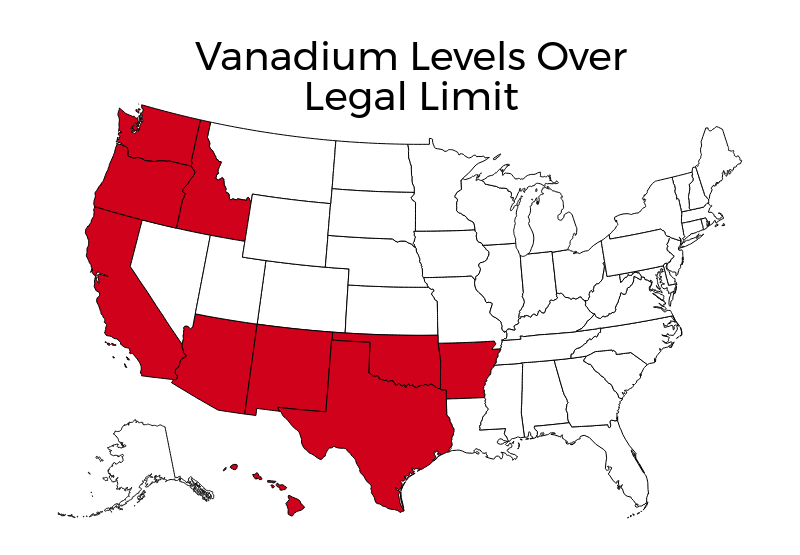 It’s unlikely you learned about vanadium in chemistry class. It’s a metal found in many foods such as green beans, lobster, and black pepper. Some experts suggest small doses could help prevent diabetes. On the other hand, overexposure, like the kind found in numerous U.S. water supplies, could lead to pregnancy complications. Many California cities tested for contamination as well as the Hawaiian cities of Waikoloa and Hilo.

Next: A seriously potent contaminate 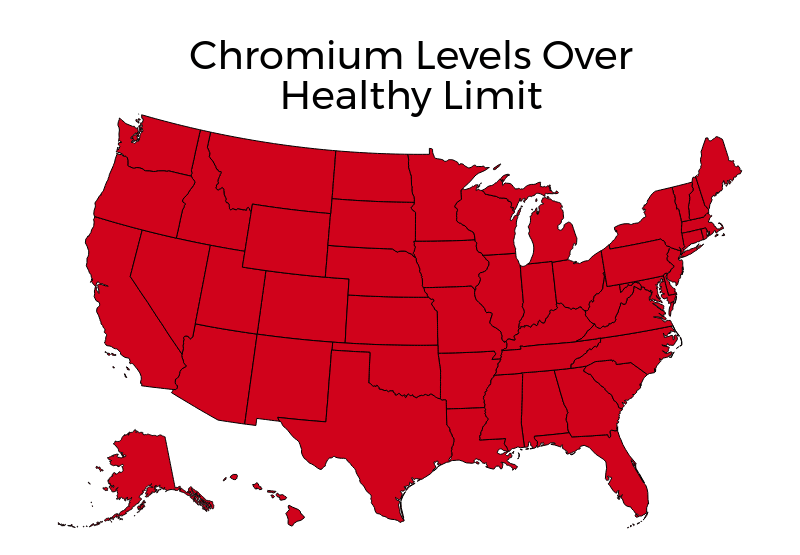 This carcinogen spread by industrial pollution is so potent that the California Office of Environmental Health Hazard Assessment recommended a public health goal of just 0.02 ppb. Unfortunately, over 250 million people drink water with elevated chromium levels above these guidelines. Numerous city water supplies in Arizona and California run the risk of drinking water polluted with chromium, but Norman, Oklahoma, is at the biggest risk. Over 70,000 people are likely to drink water containing nearly 40 ppb of the contaminant on average.

Next: The third most prevalent chemical 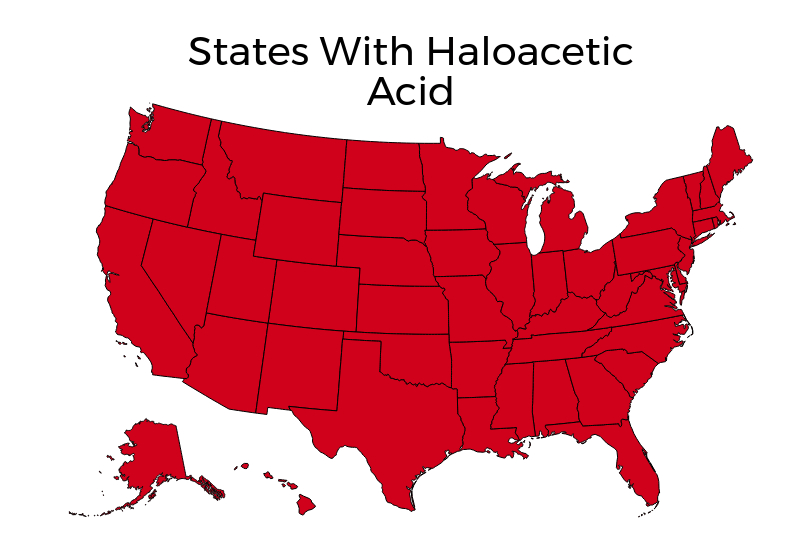 These five haloacetic acids form when chlorine is added to water, all of whom pose a threat to pregnant women and may increase your chances of cancer. Monochloroacetic acid, dichloroacetic acid, trichloroacetic acid, monobromoacetic acid, and dibromoacetic acid are found in all 50 states in over 21,000 utilities the Environmental Working Group marked as problematic. Tens of thousands of people in Kentucky, Texas, and Oklahoma receive their drinking water from contaminated utilities. Boulder, Colorado, was recently issued its second violation for HAA5 detection.

Next: A threat to children 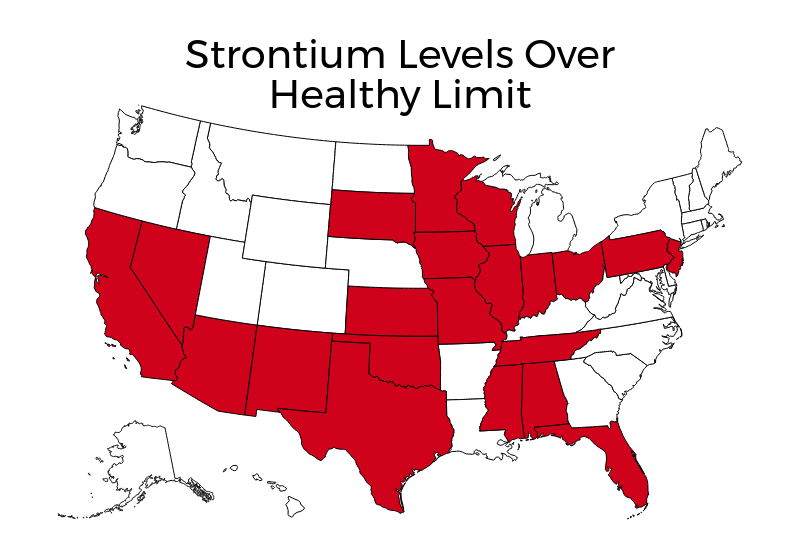 There is no national drinking water standard as of yet, but recent revelations in Wisconsin surrounding unsafe strontium levels could change that. The Environmental Working Group suggests over 260 million people are drinking strontium-contaminated water across the country. This poses serious bone health threats to consumers, specifically toddlers and young children. The second most prevalent water contaminant is also linked to leukemia. Beyond Wisconsin, utilities in states, including Florida and Illinois, raised a red flag for possible pollution.

Next: The most common drinking water pollutant 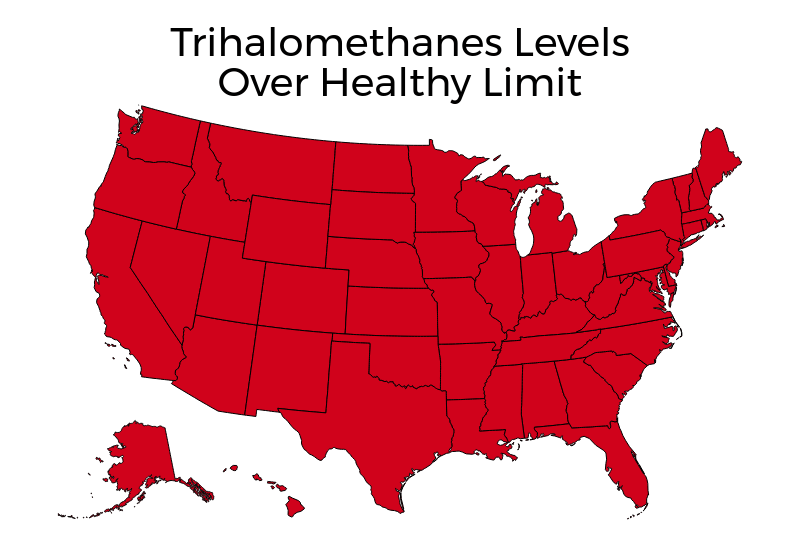 Americans have the greatest chance of drinking water infested with total trihalomethanes (TTHMS) than any other contaminant found in the Environmental Working Group’s water study. It’s been confirmed in the drinking water of 284 million Americans across all 50 states. Unfortunately, the health effects of TTHMS are pretty serious, as it leads to an increased risk of bladder cancer, skin cancer, and harm to a fetus’s growth and development. Altus, Oklahoma, and Fredericktown, Pennsylvania, make another appearance on this list, in addition to countless other Texas, California, and Maryland cities.