For many, Thanksgiving wouldn’t be Thanksgiving without a heaping helping of mashed potatoes. But if you’re not careful, this holiday dinner staple can be a disappointing afterthought, as bland and boring mashed potatoes turn into nothing more than a gravy delivery vehicle. Fortunately, with a little effort you can transform dull spuds into a star side dish. Each of the following six recipes will shine on your table this Thanksgiving, any other time of the year. 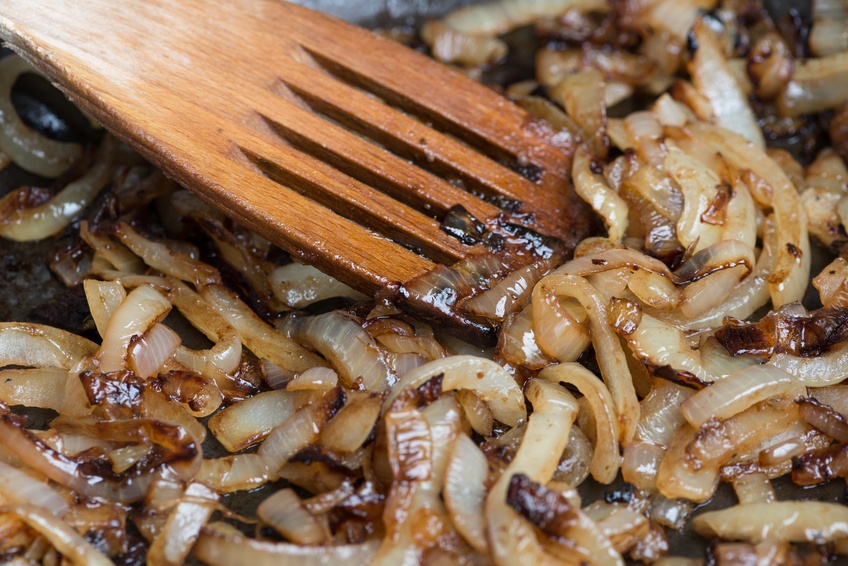 Slow-cooked caramelized onions impart some sweetness to plain old mashed potatoes in this recipe from Serious Eats. And stirring in sour cream, cream cheese, and plenty of milk and butter adds extra richness. The result is a truly decadent side dish. Serves 4 to 6.

Directions: Cover potatoes with salted water in a large pot. Bring to a boil over medium-high heat. Simmer uncovered until tender, 15 to 20 minutes.

Meanwhile heat 2 tablespoons butter and olive oil in a large sauté pan over low heat until melted. Add onions, cover, and cook, stirring periodically until soft and translucent, about 15 minutes. Remove cover, add sugar, season with salt and pepper and stir. Raise heat to medium-high and allow to caramelize, stirring often and adding water a tablespoon at a time if onions begin to burn, about 15 minutes longer.

When potatoes are done cooking, drain in a colander and return to pan. Add remaining 5 tablespoons butter, milk, sour cream and cream cheese. Mash potatoes by hand using a potato masher, leaving some texture. Season to taste with salt and pepper.

Fold in onions. Taste and adjust seasonings, if needed. Serve immediately, or store in the refrigerator for up to two days and reheat in a covered heavy dish in the oven or on the stovetop over low heat, stirring frequently and adding milk in ¼ cup increments if the potatoes seem dry. 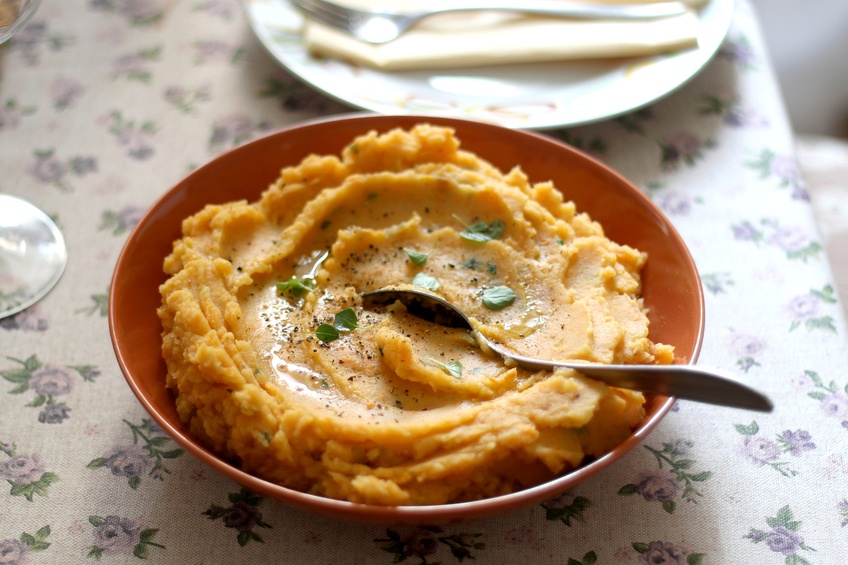 Not enough room on your table for both mashed potatoes and sweet potatoes this Thanksgiving? Consider combining them into one pretty (and pretty tasty) side dish. This recipe, which swirls together mashed Yukon gold and sweet potatoes, was developed by From the Grapevine. It’s simple to prepare and provides a dose of healthy Vitamin A, which you won’t get from standard mashed potatoes. Serves 4 to 8.

Directions: Add both the Yukon gold and sweet potatoes to a large saucepan. Cover with water. Add some salt and bring to a simmer. Cook potatoes until they are soft and can be easily pierced with a fork.

Place the peeled sweet potatoes in a large bowl. Add ½ cup of butter and ½ of the heavy cream. Mash with a potato masher until smooth. Place the Yukon gold potatoes in another bowl and mash with the remaining butter and cream. Be careful not to overwork the potatoes, or they will turn gluey.

Spoon both types of potatoes into a serving dish and swirl together. Top with cracked pepper, then serve. 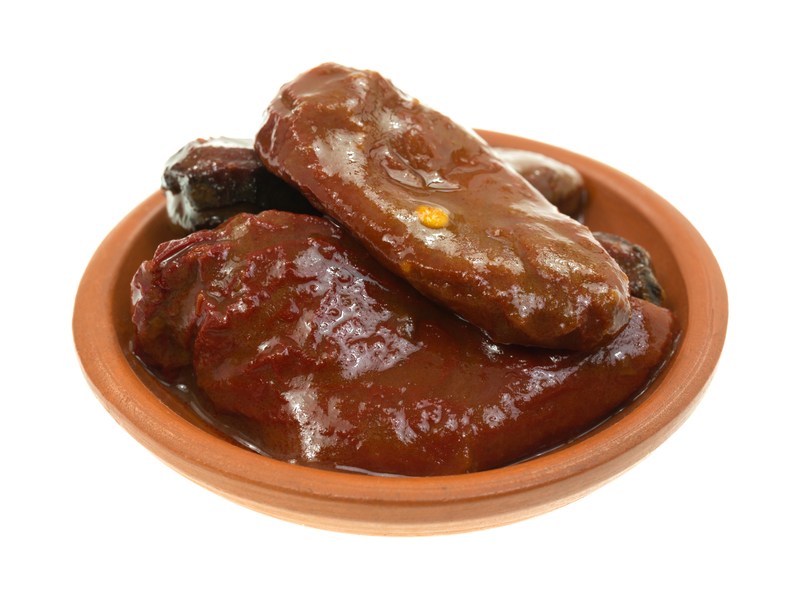 Bland and boring mashed potatoes get some extra kick with the addition of canned chipotles in adobo sauce in this recipe from Food Network. Grated white cheddar cheese pumps up the flavor even more. Even better, this dish takes just 20 minutes to prepare.

Directions: Boil potatoes and garlic in large pot of salted water until potatoes are very tender, about 20 minutes. Drain. Return to pot. Mash with potato masher. Immediately add cheese, milk, chilies, and butter and mash until smooth and cheese is melted. Season to taste with salt and pepper. 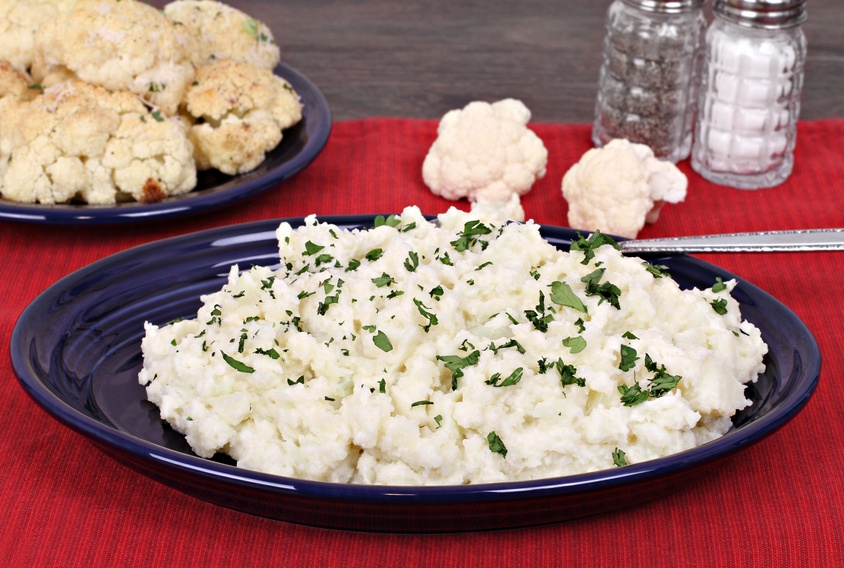 Low-carb dieters don’t have to pass on the potatoes at this year’s holiday meal. Mock mashed potatoes made with cauliflower have a similar texture and taste to traditional mashed potatoes and can be enjoyed with less guilt. This recipe comes from Steamy Kitchen and serves 4.

Thoroughly drain the cauliflower. (You want the cauliflower to be as dry as possible before mashing.) Transfer to a bowl and add the milk, butter, sour cream, salt, and pepper. Mash with a potato masher until it has the texture you prefer. Top with chives, then serve. 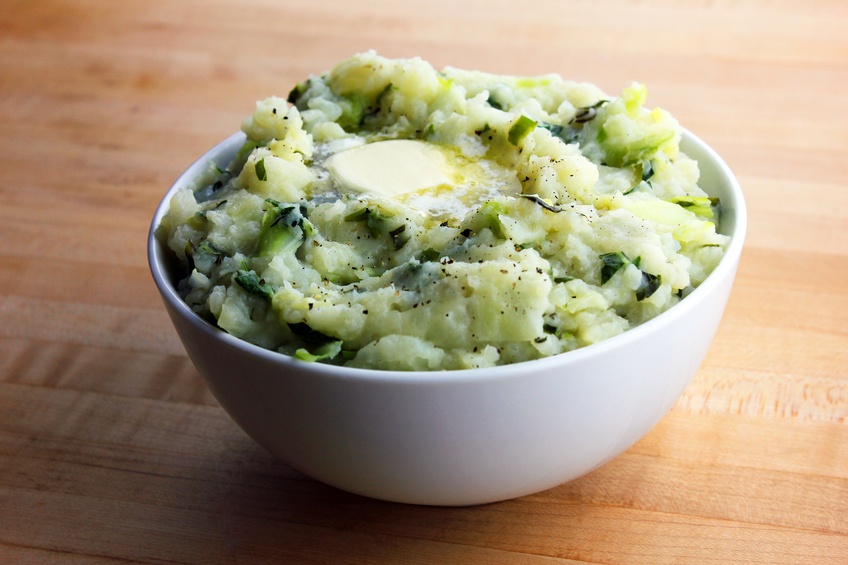 Colcannon is an Irish dish of mashed potatoes and cabbage or kale. Other ingredients, like scallions, ham, or bacon, are sometimes also added. This version is from Bon Appétit and is prepared with savoy cabbage, along with leeks, garlic, and scallions. Serves 4.

Directions: Cover potatoes with water in a small pot; season with salt. Bring to a boil over medium-high heat, then reduce heat and simmer until a paring knife slides easily through the flesh, 30 to 40 minutes. Drain, let cool slightly, and peel.

Add potatoes and remaining 1 cup cabbage, then coarsely mash with a potato masher. Season with salt and pepper.

Transfer colcannon to a large serving bowl. Top with remaining 2 tablespoons butter and sprinkle with scallion. 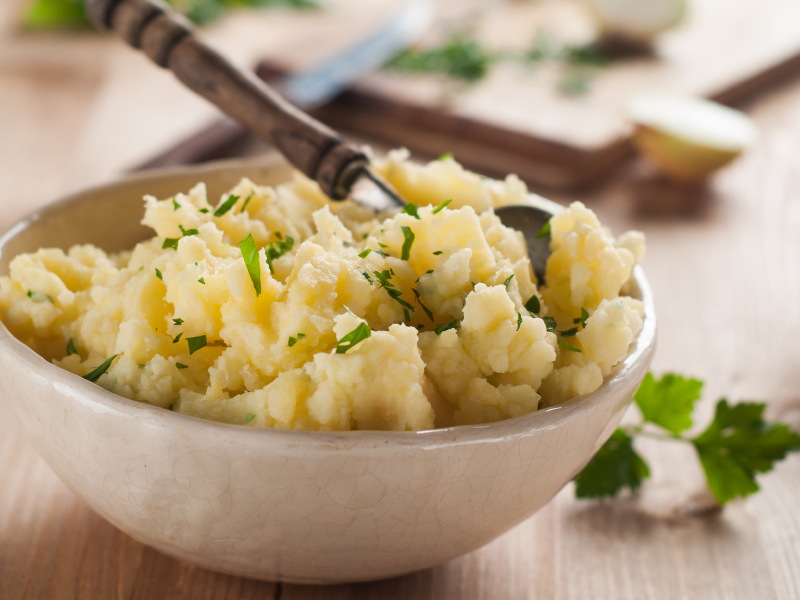 If you’re vegan or just serving a vegan guest at Thanksgiving dinner, this six-ingredient mashed potato recipe from Minimalist Baker will be a life saver. Completely free of animal products and easy to make, it’s tasty enough to please even the biggest carnivore at your table. Serves 4.

Directions: To roast a the garlic, heat oven to 400 degrees Fahrenheit. Slice off the top of the garlic bulb, rub with olive oil, and wrap in foil. Place directly on the oven rack and cook for 50 minutes. Peel cloves before adding to the potatoes.

As the garlic cooks, place the potatoes in a large saucepan and cover with water. Turn heat to medium high and bring to a boil. Add 1 teaspoon of salt. Cover, then cook for 25 to 30 minutes, or until the potatoes are very tender. As the potatoes boil, chop the chives and measure the vegan butter.

Once potatoes are fully cooked, drain and return to the hot saucepan, turn off the heat, and let any remaining water evaporate. Transfer potatoes to a large mixing bowl.

Use either a potato masher or hand mixer to mash the potatoes, taking care not to overwork them, especially if you’re using a hand mixer. Add the vegan butter, roasted garlic cloves, salt, and black pepper. Stir to combine. Taste and adjust seasoning as necessary. Top potatoes with chives and serve.