Walt Disney World, which had been closed Sunday and Monday due to Hurricane Irma, plans to reopen to the public on Tuesday, the “happiest place on earth” reported on its website Monday.

Damage to the parks appeared to be minimal, according to reports on social media.

Debris but not a whole lot of damage at the Grand Floridian Hotel on Disney's property in Orlando. #Irma : Steve Davis pic.twitter.com/GXNNsN875m

For those curious how our beloved Magic Kingdom has fared through Irma. Thanks @wdwmagic for sharing! https://t.co/2D7TjNYHIC pic.twitter.com/S1ldriyRZi

“Based on the latest forecasts for Hurricane Irma and keeping safety top of mind, Walt Disney World Resort and Disney Springs will be closed through Monday, September 11,” Disney’s website read. “Resort hotels will remain open, though services and amenities will be adjusted. We hope to resume normal operations on Tuesday, September 12.”

Irma hit Disney World’s property near Orlando from 1 a.m. to 3 a.m. Monday. The area saw winds up to 58 mph and gusts up to 79 mph, the National Weather Service reported. The city of Orlando is under curfew until 6 p.m. Monday, reported CNN. 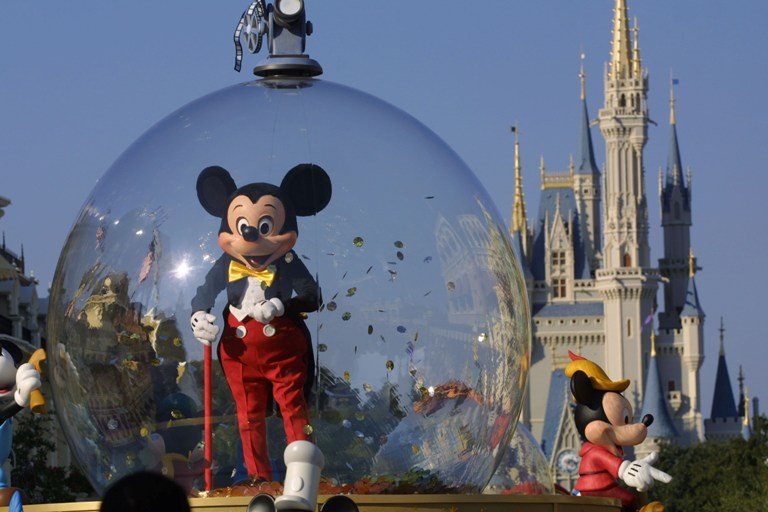 Mickey Mouse rides in a parade through Main Street, USA, with Cinderella’s castle in the background at Disney World’s Magic Kingdom in 2001 in Orlando, Fla. | Photo by Joe Raedle/Getty Images

Universal Studios Florida is operating on the same reopening schedule, according to its website. “Our destination saw relatively minor damage overnight involving fences, trees, signage and building facades,” the website read. We are hard at work inside our parks and we can confirm an on-time opening for Tuesday, Sept 12 at 9 am for Universal Studios, Universal’s Islands of Adventure and Universal’s Volcano Bay.”

SeaWorld in Orlando reported it would be closed through Monday as well, indicated it was “providing support and temporary housing for animals form other zoological facilities in coastal areas expected to have greater impact.”

Disney World has escaped major damage from hurricanes over the years, but its cruise ships and private island, Castaway Cay, were not as lucky in 2012 when they were destroyed by Hurricane Sandy. Witness David Evans wrote “there was a violent tossing of the ship from side-to-side and most of the furniture was overturned in our room.”