The Shocking Facts Behind the Bizarre Sonic Attacks in Cuba

The United States evacuated families and all nonessential personnel from Cuba this week, following a string of apparent attacks against U.S. diplomats. Neither the U.S. nor Cuba knows who is behind it, although some theories do exist.

According to CNN, 21 U.S. diplomats and their families became ill after attacks that initially appear sonic in nature. Sufferers reported a range of symptoms and experiences, and U.S. investigators have not found a concrete cause yet. The American Embassy will continue to operate with a 60% reduced staff. It will also not issue visas, effective immediately. Embassy staff will remain available for American citizens in Cuba. 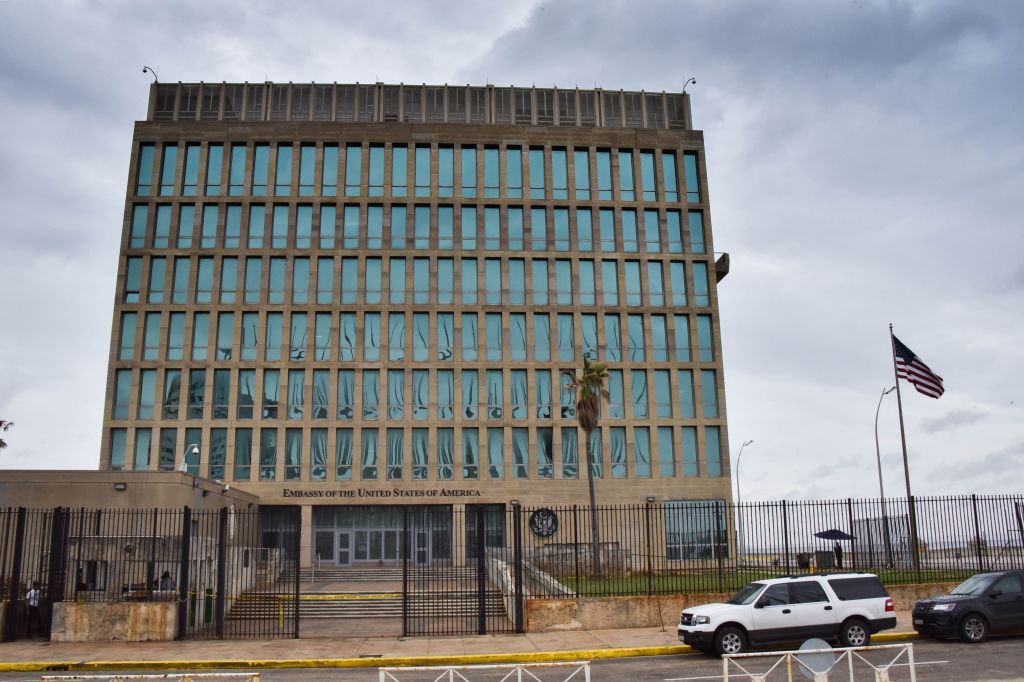 The U.S. embassy in Havana recently announced it is withdrawing more than half its personnel in response to mysterious health attacks targeting its diplomatic staff. | Adalberto Roque/AFP/Getty Images

Secretary of State Rich Tillerson issued a travel warning for Americans, since the country cannot guarantee U.S. citizens’ safety. No tourists reported falling ill, but the attacks took place at hotels where Americans stay. The U.S. travel warning said, “Because our personnel’s safety is at risk, and we are unable to identify the source of the attacks, we believe U.S. citizens may also be at risk and warn them not to travel to Cuba.”

President Donald Trump said that in Cuba, “They did some very bad things.” He did not specify who he might mean by “they.” In a meeting with Tillerson, Cuban Foreign Minister Bruno Rodríguez denied that Cuba was involved in attacks and accused the U.S. of politicizing the incidents. He said his government would continue to investigate together with with U.S. authorities. Cuba did welcome FBI agents into their country to get to the bottom of it. Here’s what they found.

FBI looks into source of illnesses 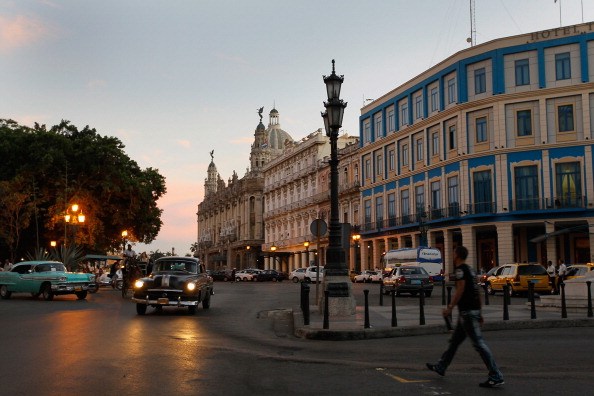 According to the AP, some diplomats reported hearing loud noises or feeling vibrations when the incidents occurred. Others heard and felt nothing yet reported symptoms later. In some instances, victims could walk in and out of blaring noises audible in only certain rooms or parts of rooms. At least 50 instances occurred, starting in November and continuing until at least late August.

“We thought we had corralled this, and then the two cases in August took place,” a senior U.S. official said. “It is not as if the attacks address individual personnel officers. Our personnel is broadly at risk. So we have to consider next steps because we need to protect our people.”

Diplomats reported experiences that sound like something out of a sci-fi novel. 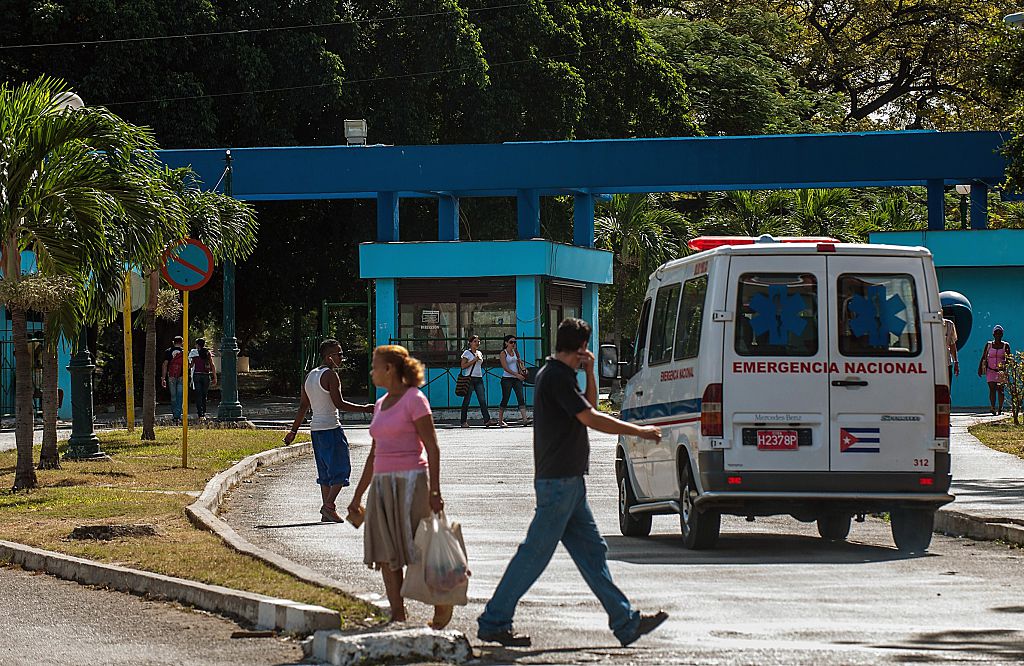 An ambulance arrives at a hospital in Cerro Municipality in Havana. | STR/AFP/Getty Images

As CNN first reported in August, diplomats awoke late at night in their homes feeling unwell and hearing sounds reminiscent of insects or metal dragging across the floor. Officials have never found devices that created the noises. Because symptoms varied so greatly, doctors consulted in the United States could not pinpoint the cause. U.S. government technical experts also called it “baffling.”

“Following instructions from the top level of the Cuban government, a priority investigation was opened …  and additional measures were adopted to protect the U.S. diplomats and their relatives,” the Cuban Foreign Ministry said, in a statement. Cuba’s foreign minister said his government “has taken into account the data contributed by the U.S. authorities and so far has found no evidence whatsoever that could confirm the causes or the origin of the health disorders referred to by U.S. diplomats and their relatives.”

While sound-based activity remains the most credible theory, experts have still not pinpointed what might be going on.

The crazy devices that someone can use to destroy your hearing 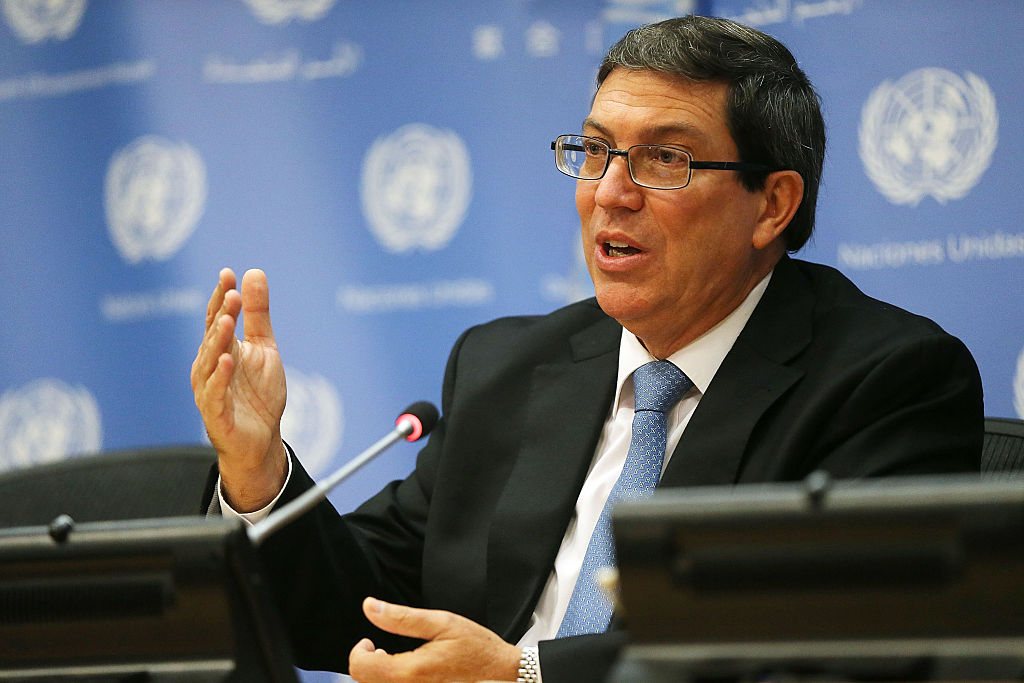 Attackers can harness and direct ultrasonic frequencies, and some experts say even amateurs can do it.
Tim Leighton, professor of ultrasonics and underwater acoustics at the University of Southampton, explained it to the Guardian. “If you want to produce a tight beam of energy that you can point at someone, ultrasound is the one to go for.” Prolonged exposure to ultrasonic sound can result in hearing loss and human tissue damage. Even a device the size of a matchbox could do so at close range, but it would have to be larger to affect victims at more than a few feet away.

“You can buy transducers on the Internet that emit these frequencies,” Robin Cleveland, a professor of engineering science at the University of Oxford, told the Guardian. “Anybody with a bit of engineering background could put one together.”

The brain damage issue, though, calls the sonic wave theory into question. “The sound would have to enter the brain tissue itself, but if you’ve ever had an ultrasound scan you’ll know they put gel on,” Cleveland said. “If there’s even a tiny bit of air between the sound and your body, it doesn’t get through.”

“Brain damage and concussions, it’s not possible,” psychoacoustics expert Joseph Pompei told the AP. “Somebody would have to submerge their head into a pool lined with very powerful ultrasound transducers.”

The next theory would explain why only select diplomats experienced the issue.

Poison could cause some of the diplomats’ symptoms 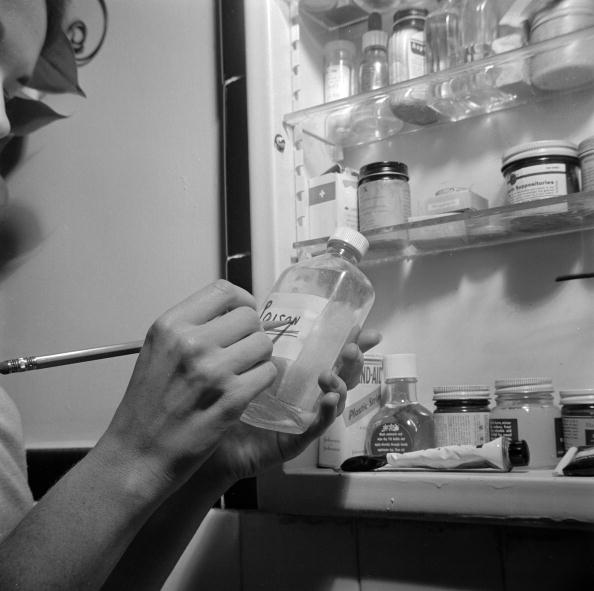 A woman writing the word ‘Poison’ on one of the bottles in her medicine cabinet. | Barry/Three Lions/Getty Images

Chemicals like mercury, lead, and some industrial cleaning supplies can cause hearing loss, according to The Washington Post. Director of Medicine at the American Council on Science and Health Jamie Wells and microbiologist Alex Berezow wrote an article in USA Today explaining how.

“If the diplomats share meals together, it is a distinct possibility that somebody poisoned their food,” they wrote. That would even explain those noises some victims heard. “Chemical solvents can cause nerve damage, which can manifest in different ways. With auditory nerve damage, some people might experience ringing [tinnitus], and others might find certain noise frequencies excruciatingly intolerable while others barely notice.”

While experts puzzle over the cause of the illnesses, diplomats try to figure out how their departure will affect Cuban relations.

Whose hands are we playing into? 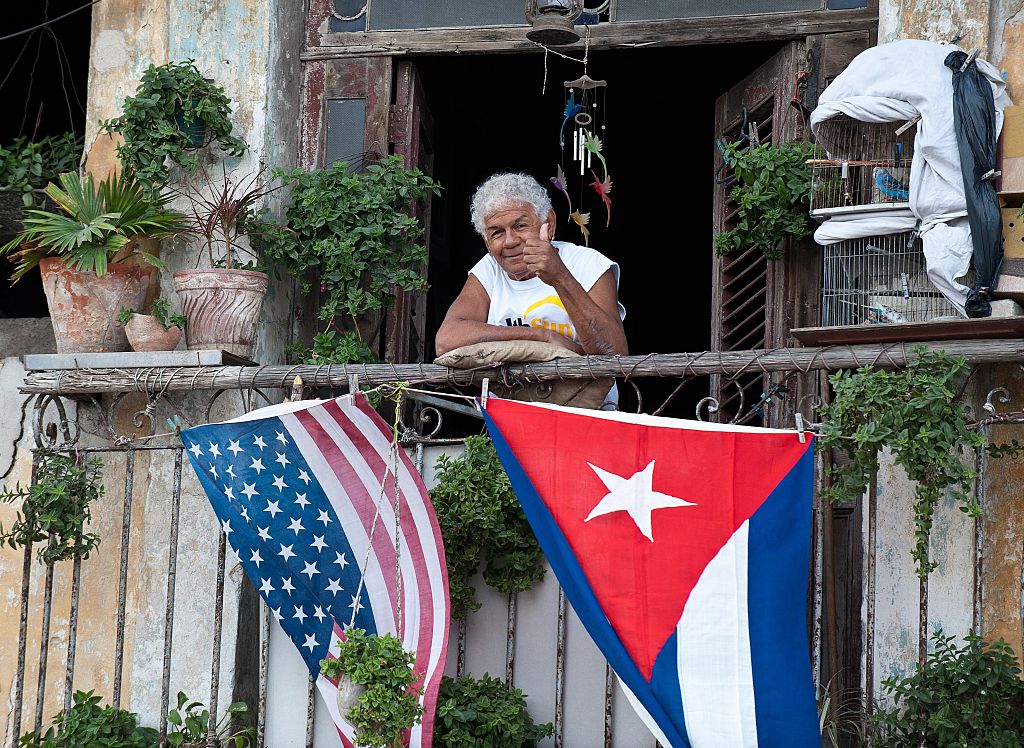 A Cuban gives the thumbs up from his balcony decorated with the U.S. and Cuban flags in Havana. Officials don’t know who to blame for the attacks. | Yamil LageAFP/Getty Images

Despite the harassment, some diplomats told CNN they did not want to leave. Some said the staffing reduction will play into the hands of whoever is behind the attacks. It will also leave the embassy understaffed during a period in which they expect Raul Castro to step down as president of Cuba. The AP reported that the Trump administration still hasn’t identified a culprit or a device to explain the attacks.

“The investigation into all of this is still under way. It is an aggressive investigation,” State Department spokeswoman Heather Nauert said. “We will continue doing this until we find out who or what is responsible for this.”

“Had they thought the Cuban government was deliberately attacking American diplomats, that would have had a much more negative effect,” Feierstein said. “We haven’t seen that yet.”

Regardless, withdrawing diplomats and their families will affect U.S.-Cuban relations. 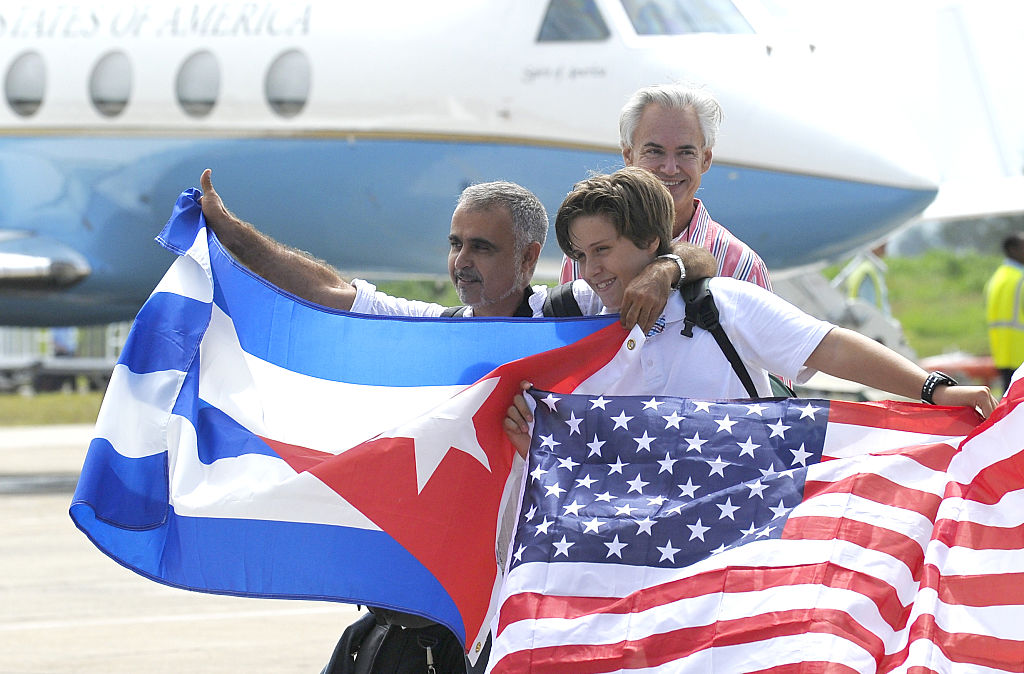 Over the last few years, relations have improved between the U.S. and Cuba. The State Department removed it from its list of countries that support state terrorism. Even though he had looked into opening hotels on the island, Trump took a harder stance. During the 2016 campaign, then-candidate Donald Trump said he would close the embassy if Cuba didn’t agree to “a better deal” with the U.S. In his speech before the U.N. General Assembly, he took a similar line.

“The United States has stood against the corrupt and destabilizing regime in Cuba and embraced the enduring dream of the Cuban people to live in freedom,” he said. “My administration recently announced that we will not lift sanctions on the Cuban government until it makes fundamental reforms.”

Some officials believe the attacks could not happen without Cuba’s knowledge. Many of the diplomats’ houses stand in highly secure neighborhoods, the same one as Castro’s.

“It is increasingly apparent the Cubans are involved in some way,” a senior U.S. official told CNN. “If it was a few attacks, you could say that maybe it was the Russians or Iranians screwing with us. But when it happens so many times, especially in the same hotel, it is hard for us believe someone can get close enough to our people … Unless these are beams from outer space.”

In typical Trump fashion, making accusations and blanket statements will not help keep the tenuous friendship between Cuba and the U.S. alive. However, withdrawing diplomats and their families and instituting the travel ban will at least keep them alive, which is a start.