Even at its simplest, French food depends on executing exacting techniques. In many cases, this also means dirtying a lot of dishes. If these obstacles typically keep you from enjoying the cuisine’s delicious flavors, these egg cups are for you. They taste just like a croque madame, but for a fraction of the effort. 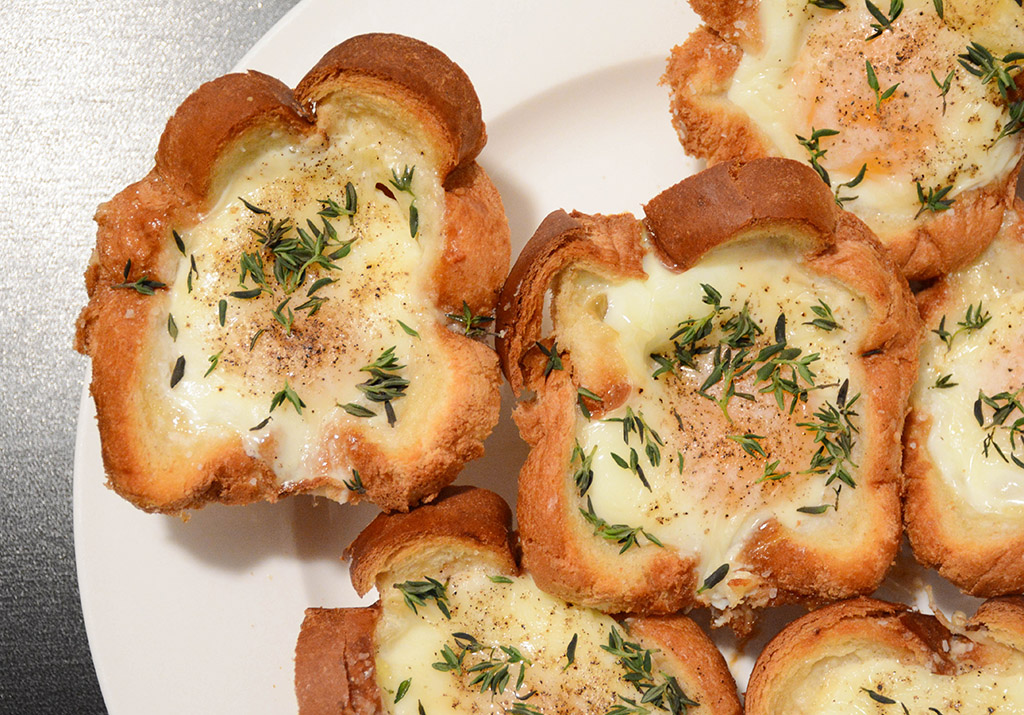 While a traditional croque madame isn’t exactly hard, making the sauce, assembling, broiling, and frying eggs is a lot of effort for a sandwich. Since ham, eggs, and Gruyère cheese all have tons of flavor, we knew there had to be a way to simplify the recipe. Baked egg cups quickly came to mind because they’re easy to adapt with different ingredients and are about as fuss-free as cooking can get.

To form the base of each egg cup, choose a soft white bread. Skip the hearty country stuff because it just won’t work here. The crust makes it too difficult to work with and you’ll end up with tears. Once you have your bread, press the slices into buttered muffin cups. You want to avoid tearing, but don’t be afraid to press hard to create as much space as possible for the fillings.

The biggest hurdle was coming up with a simple replacement for béchamel. This creamy sauce is the foundation of a croque madame thanks to its luxurious texture and flavor, but we found we were able to get very similar results by using a touch of cream seasoned with Dijon mustard. Combined with ham and cheese in the base of each egg cup, the cream formed a sauce with just the right texture and flavor. Once the cream, ham, and cheese are in each cup, use a spoon to firmly press everything down to make enough space to accommodate the egg.

Adding the egg to each portion is the moment of truth. If you’ve been careful to compact the ingredients so far, the eggs should just fit into each cup. If you have a bit of overrun from the egg whites, it’s not the end of the world. You’ll just have to be careful about removing the finished product as egg whites tend to stick once they’re cooked.

Once you start baking, you’ll want to keep an eye on the time. We’ve recommended shooting for between 18 and 24 minutes, but it really depends on your oven and how runny you prefer your eggs. You’ll also need to flip the muffin tin halfway through. Most ovens have hot spots, so flipping makes sure everything cooks evenly. Once the eggs are just cool enough to handle, carefully remove them using a fork, then eat as soon as humanly possible.

Though this recipe isn’t something you’ll see across the Atlantic, French wines still make a great pairing. Go for an off-dry Riesling or a light Beaujolais. Feeling fancy? Try a French 75.

We love these egg cups for a fun appetizer, but they’re also great for a brunch dish. You can easily double the recipe, so feel free to invite a crowd. This recipe serves 6.

Directions: Preheat oven to 400 degrees Fahrenheit. Grease six wells of a 12-cup muffin tin with a very thin slick of butter. Carefully press bread slices into each buttered well, pressing to cover bottom and fill edges of cups, but being careful not to tear. Use your fingers to press down overhanging edges to create as much space for filling as possible. Brush any remaining butter over bread.

Transfer to oven and bake until whites are set and yolks remain runny, about 18 to 24 minutes, rotating pan halfway through. Bake slightly longer if you you prefer more cooked yolks. Remove from oven and let cool for a minute or two. Run a knife around edges to loosen, then carefully remove to a serving plate. Garnish with thyme leaves and serve.

See you back here next week.