8 Easy Pumpkin Desserts That Are Better Than Pie

Pumpkin season is here for a bit longer, and we have the right and responsibility to use it in every dessert we make from now until January. You can roll your eyes at the “basic”ness of it all, but who are we kidding? When it comes to fall flavors, pumpkin spice is everything nice. Sure, Thanksgiving is the time for pumpkin pies. But when it comes to creative pumpkin desserts for the rest of fall, it’s time to think outside the crust.

These desserts promise to be easier than pie — or at least simpler than making a crust yourself. Ignore the haters who claim they’re not into flavoring everything with the autumnal produce, and serve up one of these delicious desserts. They’re a snap to prepare, and we bet even the naysayers won’t be able to resist.

Note: In all of these recipes, choose plain canned pumpkin instead of pumpkin pie mix, which has added spices and sweeteners. 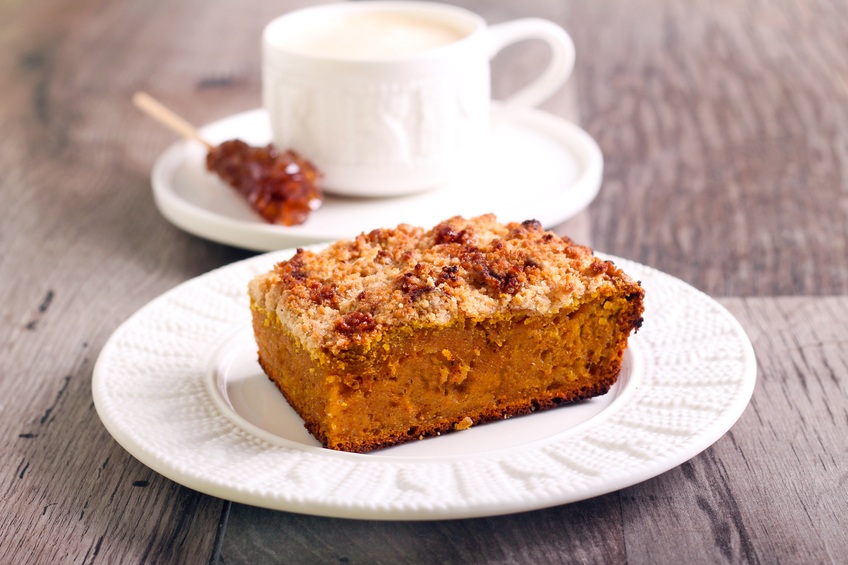 The name might be a little vague, but we promise this cake will deliver on the “great” part. About 475 people have rated this an average of 4.5 stars on Allrecipes.com, likely because of the fall flavors mixed with the pure ease of preparing this dessert. You’ll mix canned pumpkin with simple ingredients you probably already have, and then sprinkle a yellow cake mix over the top. Finish with melted butter and walnuts to get a streusel-like dessert that’s so easy, you’ll think you cheated.

In a large bowl, combine pumpkin, milk, eggs, sugar, and spice. Mix well, and pour into the baking pan. Sprinkle dry cake mix over the top, then drizzle with melted butter, and sprinkle with walnuts.

Bake for 1 hour, or until a knife inserted near the center comes out clean. Serve with vanilla ice cream or whipped cream, if desired. 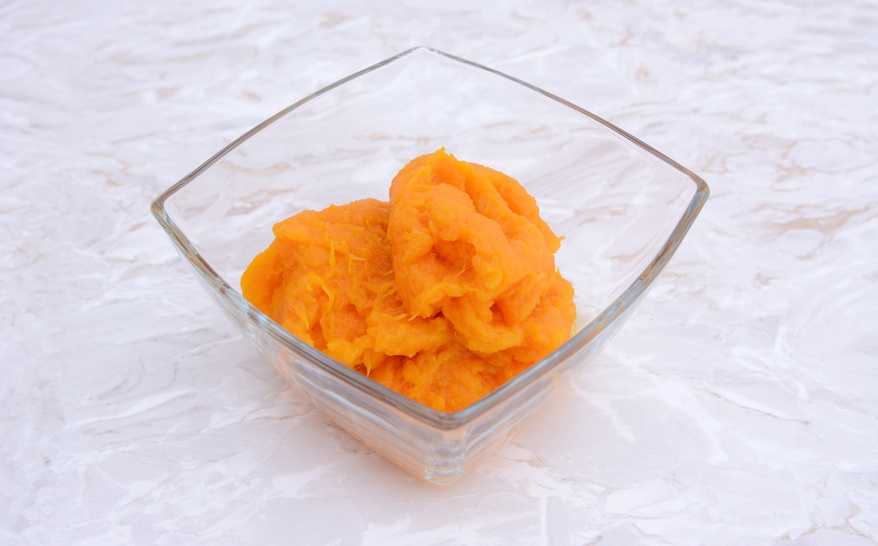 Pumpkin purée in a glass | iStock.com

Yes, technically this recipe from Martha Stewart includes the word “pie,” but it’s more ice cream dessert than starchy crust, so we’re in the clear if you’re looking to avoid pie-like desserts. You’ll still get the silky, creamy texture of pie filling, but it will come from gelatin and cream cheese instead of a traditional pumpkin custard. You’ll also make a crust with cinnamon graham crackers, adding texture and flavor to the overall dessert. Plus, it’s chilled instead of baked, which makes it a breeze to make ahead of time.

Bake until crust is deep golden brown and fragrant, about 20 minutes. Let cool completely in baking dish on a wire rack.

To make the filling, place ¼ cup cold water in a small bowl. Sprinkle gelatin on top and let stand 5 minutes. In a large bowl, whisk together pumpkin puree and cream cheese until smooth. In a small saucepan, combine evaporated milk, brown sugar, cinnamon, nutmeg, and salt; bring to a simmer over medium heat. Add gelatin mixture and stir until completely dissolved. Pour milk mixture into pumpkin and whisk until smooth.

Pour filling into cooled crust and refrigerate until set, about 3 hours. To serve, whip cream with confectioners’ sugar until soft peaks form. Top pie with whipped cream and sprinkle with nutmeg. 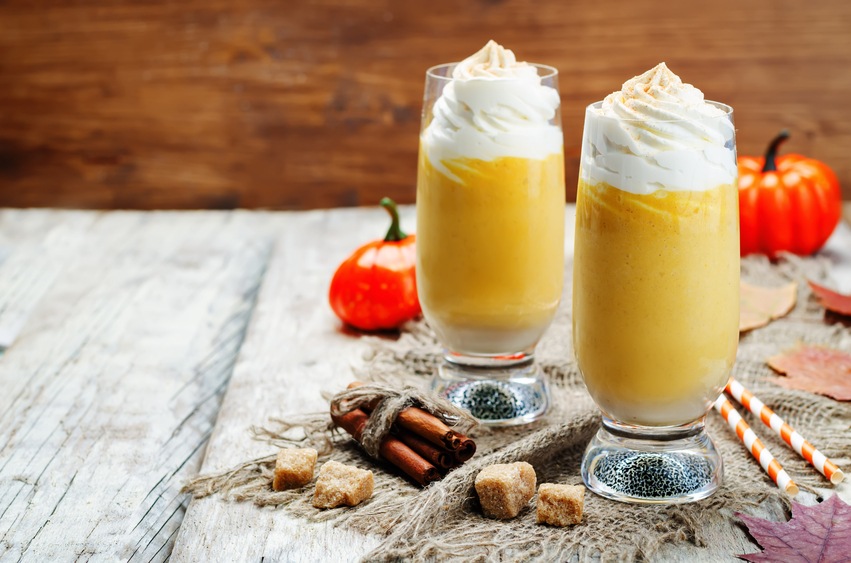 Mousse is basically fancy pudding, with a touch of class and extra fluffiness. Assembling it with layers of whipped cream and chocolate shavings adds even more pizzazz, which you’ll see when you make this recipe from Country Living. The mousse isn’t difficult to make, but does require significant chilling time to set. With that in mind, it’s perfect for a dessert you can make ahead, with very few last-minute details. And since you’re layering the mousse and whipped cream, it’s simple but elegant in its presentation.

Directions: Fill a large bowl halfway with ice water and set aside. Whisk the yolks, ¾ cup plus 2 tablespoons sugar, and ¾ cup cream together in a medium saucepan. Heat while stirring continuously with a rubber spatula or wooden spoon over medium-low heat, until thickened and the mixture coats the spatula — about 10 minutes. Transfer to a medium bowl and set over the ice bath. Stir to cool.

Add pumpkin, vanilla, spices, and salt to the egg mixture. Stir 1 tablespoon rum and 1 teaspoon gelatin together in a small bowl. Heat the remaining tablespoon rum, and stir in to the gelatin mixture until dissolved. Gently whisk into the pumpkin mixture. Beat ½ cup cream to stiff peaks, and fold into pumpkin mixture. Pour into a shallow dish, cover and chill until cold and thick enough to fall from a spoon in heavy dollops — about 8 hours or up to overnight.

Beat the remaining cream and sugar to stiff peaks. Alternately layer the pumpkin mousse and whipped cream in a glass serving dish. Sprinkle the chocolate shavings between the top two layers. Serve chilled. 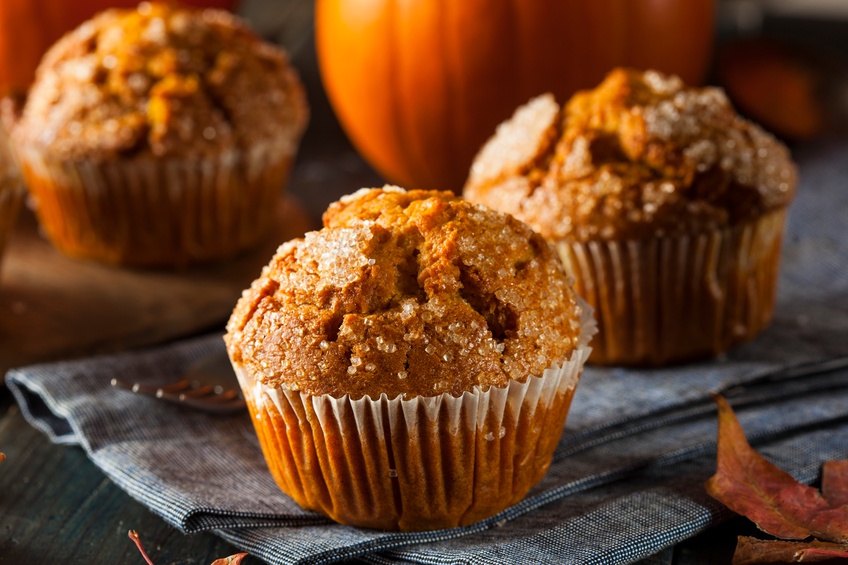 If you prefer your desserts to be a little less sweet, try these muffins from Woman’s Day. The muffins themselves are balanced with spices, pumpkin, and cranberries, but aren’t cloyingly sweet. The maple drizzle for the top is a perfect way to take this muffin from breakfast territory into dessert — although we’re not going to judge if you snag one of these in the morning, too.

For the maple drizzle

Beat in eggs and whites. Beat in pumpkin purée on low speed, mixing just to combine. Alternately beat in flour, then milk, until just blended. Stir in berries.

Put ¼ cup batter in each muffin cup. Bake 30 minutes or until toothpick inserted into center comes out with a few moist crumbs attached. Cool 5 minutes in pans on rack, remove from pans and cool completely.

Up to 4 hours before serving, stir confectioner’s sugar and maple syrup in small bowl until smooth. Scrape into a small ziptop bag. Cut a small tip from one corner of bag and drizzle over cupcakes. Garnish with pumpkin seeds. 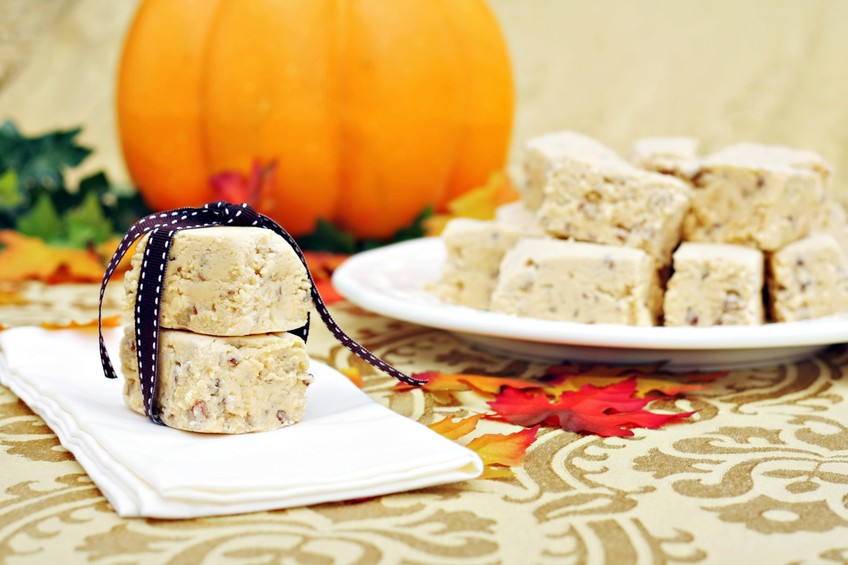 Fudge can be one of the simplest desserts to make, and is perfect if you’re looking to satisfy that sweet tooth with bite-size portions. It really doesn’t get much easier than this fudge recipe from Delish since you begin with a white chocolate base. It doesn’t contain any pumpkin, but the flavors will remind you of the richest bite of pie you’ve ever had. Simply add some sweetened condensed milk and pumpkin pie spice for the flavors of fall in one bite.

Using a spatula, transfer fudge into a parchment-lined glass baking dish and smooth over top. Sprinkle with more pumpkin pie spice and let sit until firm. (Transfer to the fridge to speed up the process.) Cut into squares. 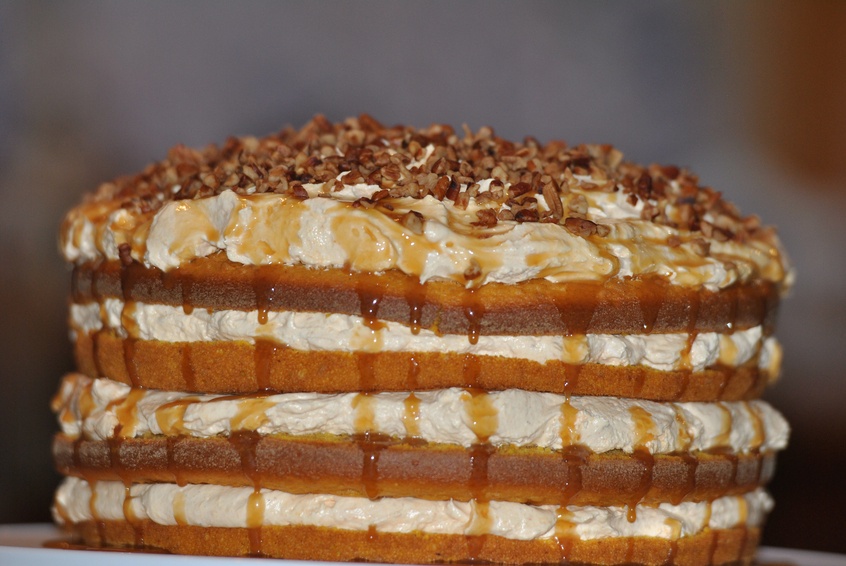 Tortes look fussy, but in reality, most of them are rather easy to prepare. This recipe from Taste of Home has a mild pumpkin flavor, the author writes, and is accented with caramel and chopped pecans for a topping. Of course, you can experiment with any toppings you choose — that’s the beauty of being the chef.

Bake for 25 to 30 minutes, or until a toothpick inserted near the center comes out with a few moist crumbs attached. Cool for 10 minutes before removing from pans to wire racks to cool completely.

In a large bowl, beat the cream cheese until light and fluffy. Add the confectioners’ sugar, remaining pumpkin, and pumpkin pie spice. Beat until smooth. Fold in whipped topping.

Cut each cake horizontally into two layers. Place bottom layer on a serving plate; spread with a fourth of the filling. Repeat layers three times. Drizzle with caramel topping and sprinkle with pecans. Store in the refrigerator. 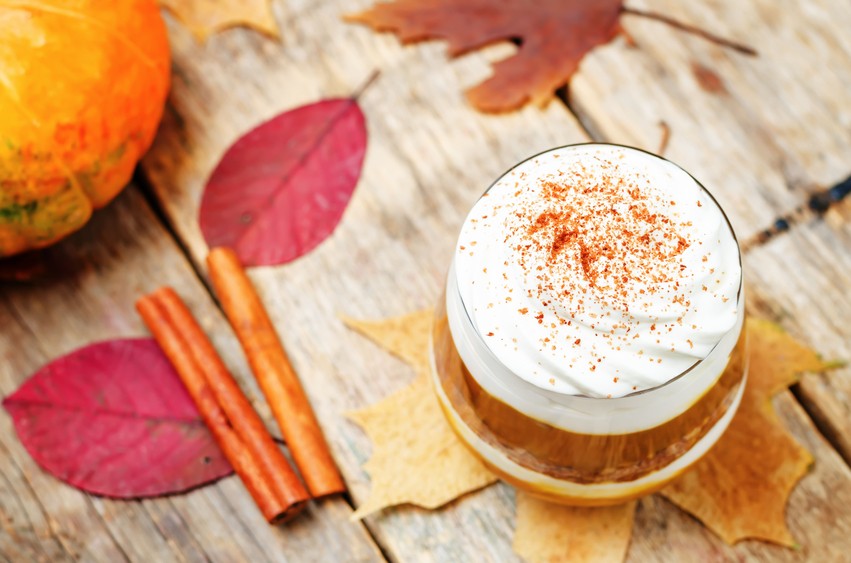 Cheesecakes can be time-consuming, somewhat complicated, and often require special equipment. If you don’t have a springform pan (or don’t feel like pulling yours out and drawing a water bath for it), try this no-bake version from Cooking Classy instead. You’ll make a quick crumbled cookie bottom, then fill glasses with the pumpkin cheesecake mixture. After adding whipped cream, you can top it with any caramel sauce you choose, although the blogger also supplies a homemade version if you’d prefer to make it yourself.

For the caramel sauce

Directions: In a heavy, 3-quart saucepan, heat sugar and water over medium-high heat, stirring until sugar is fully dissolved. Once mixture reaches a boil, stop stirring and allow mixture to cook until a deep amber color, swirling occasionally. Immediately add butter, remove from heat, and whisk to combine. Add cream, and stir until smooth. Pour into a jar or other heatproof container to cool. Season lightly with salt.

In a mixing bowl or food processor, combine butter and cookie crumbs. Divide mixture among six small cups and gently press into an even layer.

Pipe or spoon pumpkin mixture over cookie crumb layer in cups. Chill until ready to serve, then whip remaining ⅔ cup heavy cream until stiff peaks form. Pipe or dollop over pumpkin layer. Drizzle each with caramel sauce and sprinkle lightly with sea salt and serve. 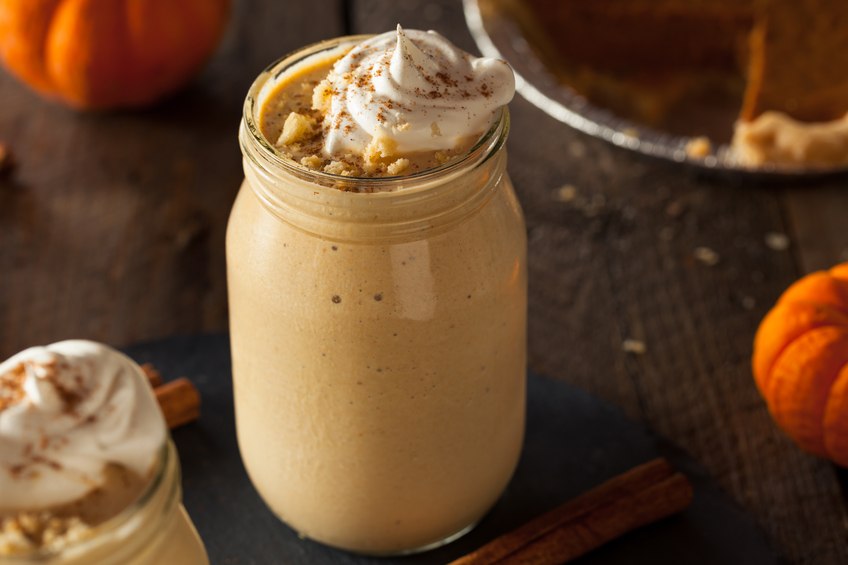 If you’re after an adult dessert you can slurp, try this tempting blend of pumpkin, bourbon, and ice cream. Milkshakes are perfect for creativity, but this recipe from How Sweet It Is should get you started on the right proportions of bourbon to ice cream. Dress them up for a party or enjoy them at home on a fall evening with your partner. Either way, they’re a perfect way to blend pumpkin into a favorite dessert.

Directions: Add all ingredients to a blender and mix until combined. Rim glasses with a light coating of frosting, then dip in sprinkles. Pour in shake and sprinkle cinnamon on top. Top with whipped cream to serve, if desired.