Every so often, you order what sounds like the greatest item on a bar menu only to find yourself extremely disappointed after the first bite. This is almost always the case with beer cheese soup. The two star ingredients are on most people’s list of favorite foods, but somehow the combination goes horribly wrong. We’re reinventing the classic bar food this week, turning it into a dip that tastes every bit as good as the name implies. 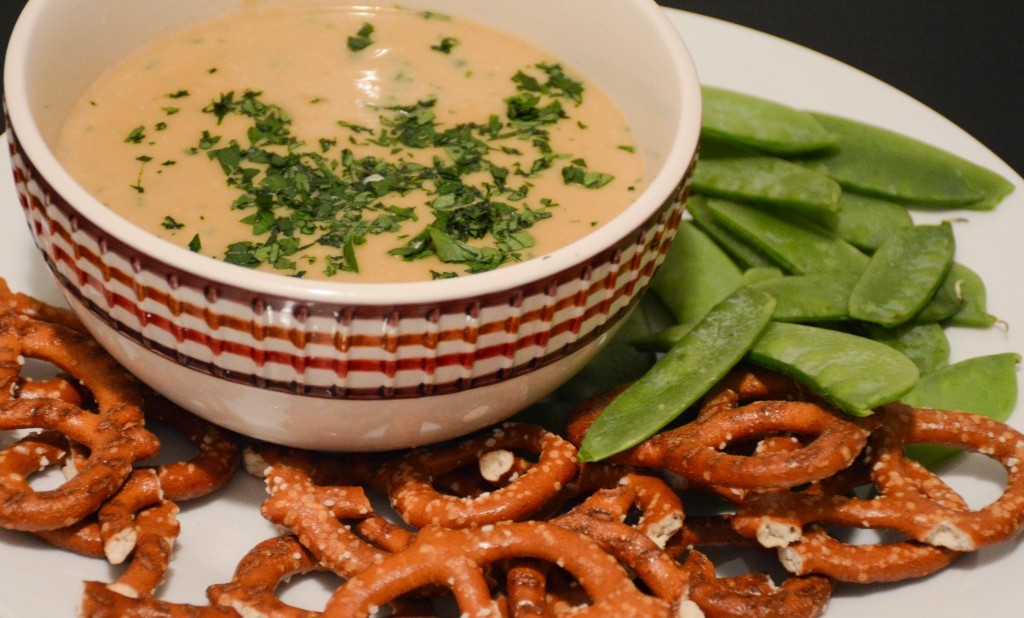 Beer cheese soup usually fails in both the flavor and texture departments. The balance between the beer and the cheese has to be right to get the best taste. One usually dominates the other, leaving the dish tasting completely flat. We wanted tons of flavor that highlighted both ingredients, so we opted for a rich stout and the sharpest, boldest cheddar we could find. We found a little bit of onion in the background softened the bitterness from the beer and made the resulting sauce taste much more complex.

As for the texture, the soup is often incredibly thick, which makes it difficult to eat more than a few bites. Though we’re morphing the classic recipe into a dip, we still wanted it to be on the lighter side to keep it from feeling overwhelmingly rich. It’s also a lot easier to dunk crackers or veggies in something a tad less viscous. We’ve all seen people break chips in the bowl of dip as they try to scoop.

Start out by sweating the onion in some butter. It’ll look like quite a lot of fat, but you’ll need all of it to build the roux a bit later. The goal here is to cook the onions until they’re very tender without browning, which will add a bitter aftertaste. The stout has plenty of that on its own, so go slow and steady with the onions. If you notice yours are starting to get too much color, just turn down the heat a bit.

Next, we’ll stir the flour right into the onions to create a roux. Cooking the mixture for about a minute eliminates the raw, starchy taste of the flour without diminishing its thickening power too much. Now stir in the beer in a steady stream while constantly stirring, then follow the same procedure with the milk. Once your liquids are added, keep everything moving with your spoon to make sure it cooks evenly. You’ll end up with a gritty sauce if any one area gets too hot, so be patient and stir until you notice the mixture thickening. When it coats the back of the spoon, you’re there.

Before adding any of the cheese, turn the heat down to the lowest setting. Add the cheddar in handfuls, stirring to melt completely before adding another handful. One important note about the cheese is to get something sharp and flavorful that hasn’t been aged for too long. Varieties that have been aged for multiple years taste great alone, but they don’t melt particularly well. Once all the cheese is incorporated you can either finish the sauce with the parsley or, for a perfectly smooth dip, strain the dip to remove the bits of onion before adding the fresh herbs. This is your call, so skip it if you don’t mind a little bit of texture.

The perfect beverage pairing for this recipe? The same beer you used in the dip. You can go for a slightly lighter type of beer if you find stout to be too rich, but you’re going to be best off choosing something with some bitterness or malt, such as a brown ale. A medium-dry cider would also be spectacular with this sauce, especially if you’re using pretzels as a dipper.

Wine is a less obvious, but pretty fun, pairing with this recipe. You could go for something slightly sweet, like an off-dry Gewürztraminer, or shoot for something a little weightier with a lightly oaked Chardonnay. Both of these wines pair wonderfully with the cheddar and have enough character to stand up to the beer. You can opt for red as well, just make sure you’re not choosing anything too tannic. The Chicago Tribune suggested pairing Grenache with a rich cheese soup.

For cocktails, you’d be smart to look to the classic cheddar and apple pairing as a guide. Try this whisky and cider drink from Saveur or spike some mulled cider with this recipe from Martha Stewart’s Everyday Food.

You’ll have difficulty finding anything that doesn’t taste good slathered in this creamy dip, but pretzels are probably our favorite dunker. This recipe might also be the most delicious way to eat your veggies. You’ll have enough to serve 6 to 8 people.

Directions: Melt butter in a medium saucepan over medium-high heat. Add onion, and season with salt. Cook, stirring, until softened, about 3 minutes. Add flour, and cook, stirring, for 1 minute.

In a steady stream while constantly stirring, add the beer. When fully incorporated, stream in the milk in the same manner. Continue to cook, stirring constantly, until mixture begins to bubble and thicken, about 5 to 7 minutes.

Reduce heat to low, and add cheese by the handful, stirring until fully melted before adding more. Season with salt. If desired, strain mixture to remove onion. Stir in parsley, and serve with crackers, pretzels, or vegetables.

See you back here next weekend.