Though nearly every type of cuisine showcases at least a handful of dishes that pair well with drinks, Mexican food might have all the others beat. We suspect it has something to do with the spicy chiles and rich meats often found in eats from this area. Foods like tamales and chicken mole are unbeatable when it comes to flavor. The downside is those dishes take an entire day, and sometimes an entire pantry’s worth of ingredients, to cook. On the other hand, a basic guacamole just doesn’t feel that exciting for drinks with your pals. You shouldn’t have to choose between convenience and flavor, and you don’t have to when you make these simple tacos with a tomato and chipotle salsa. 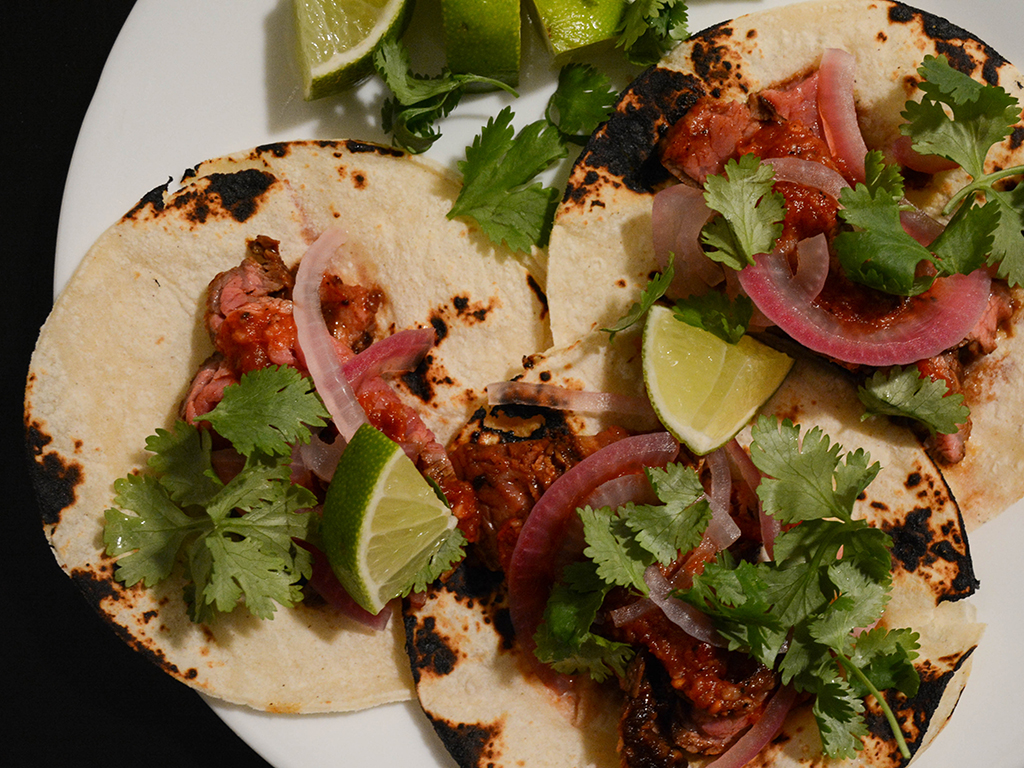 Cooking good tacos isn’t all that hard. Making them into something great can be a little bit more confusing. A lot of us think more is better when it comes to food, which means plenty of restaurants serve these handheld eats topped with two kinds of salsa, shredded cheese, avocado, diced onion, sour cream, and hot sauce. It’s amazing how so many ingredients can add up to a taco that tastes kind of bland and completely jumbled. So what’s a taco lover to do? Keep it simple. This recipe features a salsa that stars as both a marinade and a sauce, giving you tons of flavor without tons of work. You even use the same pan twice to help cut down on dishes.

To get started, line a large skillet with aluminum foil. Crank the heat, then char some tomatoes and unpeeled garlic cloves right in the foil. Leaving the skins on the garlic lets it develop a toasty flavor without burning and the foil allows everything to get plenty of char without creating a mess. After everything gets a nice bit of color and starts to soften, take the pan off the heat. Peel the garlic, core the tomatoes, gently squeeze out the excess juice, then toss it all into a food processor. Add a bit of lime juice, salt, and chipotle, then blend until you get a coarse purée. You’ll save half of this salsa exactly the way it is, then add a bit more chipotle to the remaining mixture to create a more intense marinade. If you’re a bit sensitive to heat, try scraping the seeds out of the chipotles rather than omitting the chiles entirely.

This is one instance where you really don’t want to break the bank on getting a fancy cut of beef. Skip the rib eye and go for skirt or flank steak instead. They have plenty of flavor, and come out perfectly tender once sliced against the grain. Combine your meat of choice with the marinade, and let it sit at least 15 minutes before you sear. Though cooking times will vary based on exactly how thick your meat is, keep in mind skirt steak cooks up faster. Either way, you’ll use the same pan to cook the meat to a rosy medium-rare. Next is the most critical step in the process: letting the meat rest. Cutting into a steak fresh from the pan will cause all the flavorful juices to spill out over the cutting board. Hold off for 10 minutes so the liquids have a chance to redistribute. Trust us, it’s worth the wait.

These tacos don’t need much in the way of garnishes. Just pile some meat and salsa into tortillas and top with a sprinkle of cilantro, a squeeze of lime, and a few pickled onions. The goal is to let the flavor of the meat shine, so minimalism is the way to go. If you want to make your own pickled onions, it’s incredibly simple. Slice half of a medium red onion into rings or half moons, then bring equal parts water and white vinegar to a boil. Add a teaspoon or two of sugar and one good pinch of salt. Add the onions, then remove from the heat, and let them cool. They’re also great on sandwiches and scrambled eggs. 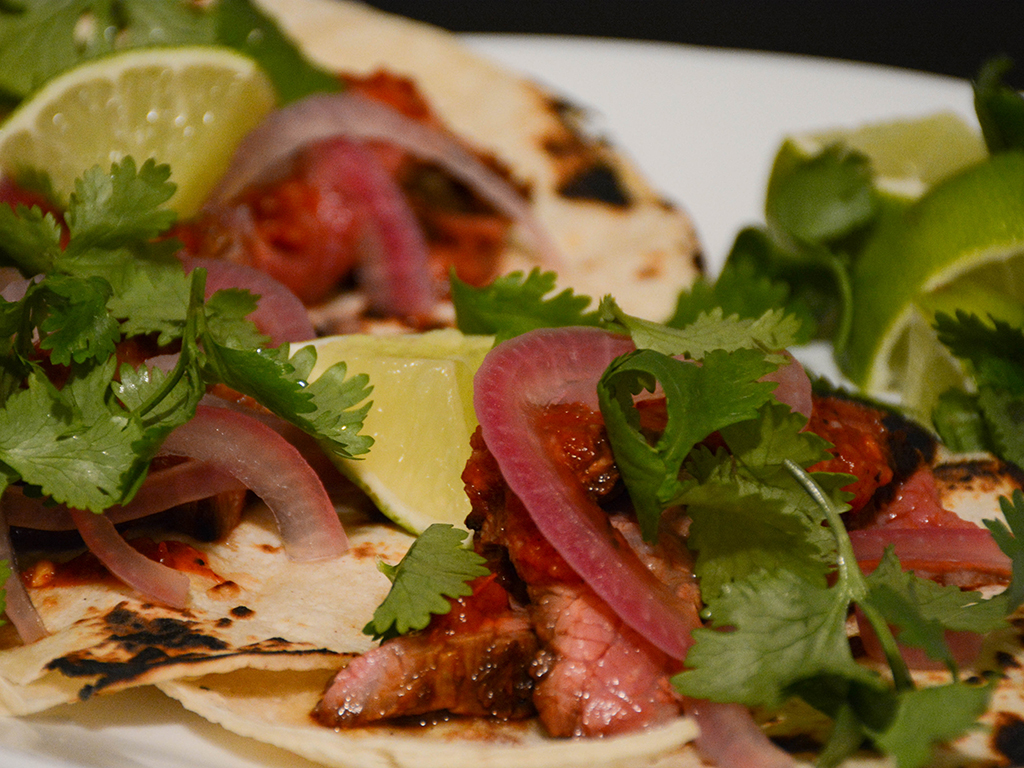 Any type of tortilla will work for this recipe, but we prefer the type made from corn. They have a slightly sweet flavor, which is even better if you char them for a few seconds on each side. Since you only need a few slices of meat for each taco, this dish can feed four to six people.

Directions: Line a large, heavy skillet with aluminum foil and set over high heat. Add garlic cloves and tomatoes, cut-side up, to foil. Cook, turning garlic occasionally, until bottoms of tomatoes start to blacken. Flip tomatoes and cook on second side until charred, continuing to flip garlic, 6 to 8 minutes. Remove from heat, and transfer tomatoes and garlic to a cutting board. Discard foil, but reserve skillet.

Cut cores from tomatoes and peel garlic. Coarsely chop tomatoes and garlic. Transfer to a food processor, leaving liquid behind and gently squeezing excess from tomatoes. You want to avoid adding too much liquid to the salsa or it will turn out watery. If necessary, let the tomatoes drain in a strainer for a minute or two. Add two chopped chipotles and lime juice to food processor, season with salt, and blend everything to combine. Remove half of salsa, and set aside. Add remaining chipotle and adobo sauce to salsa in food processor, and blend to combine. Pour over steak in a shallow dish or zip-top bag, and let marinate at least 15 minutes.

In same skillet, heat oil over medium-high heat. Remove steak from marinade, allowing excess to drip off. Season liberally with salt on both sides. Cook steak until nicely browned on outside and medium rare inside, about 3 to 4 minutes per side for skirt steak or 5 to 7 minutes per side for flank steak. Remove from heat, and let rest 10 minutes.