Eggplant is in peak season in July, which means now is the perfect time to incorporate this healthy food, which is part of the nightshade family, into your diet. A 1-cup serving of the oddly shaped fruit delivers 10% of your recommended daily fiber intake and has no fat or cholesterol. If bad experiences with eggplant recipes in the past have turned you away from this food, consider giving it another look. When properly prepared, eggplant can be delicious.

As with any fresh produce, the key to successful cooking with eggplant is starting with high-quality fruit. For your eggplant recipes, look for specimens that have been recently harvested. According to The Kitchn, these ones will be the least bitter. Smaller eggplants also have a better flavor than larger ones. Pass on too-soft eggplants at the store, and keep them in a cool, dry place in your kitchen (not in the fridge) until ready to use.

When it comes to picking recipes, you can always turn to standbys like eggplant Parmesan, ratatouille, and baba ghanoush when you’re looking for a way to use these purple fruits. But aubergines are more versatile than many realize, as these five eggplant recipes prove. 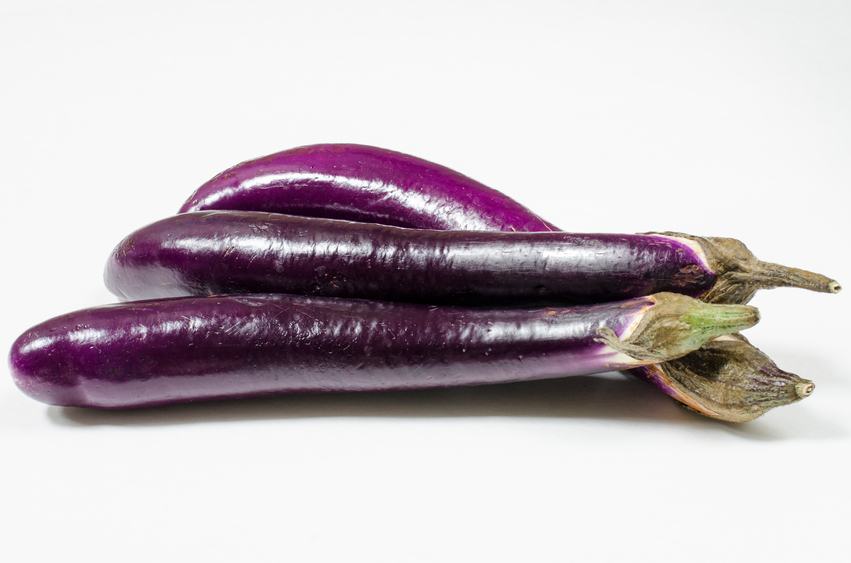 In this dish — known as khayan thee hnut — eggplant is simmered in a sauce made of dried shrimp, ginger, garlic, paprika, and turmeric. Look for smaller Japanese eggplants, which are long and skinny (kind of like a purple zucchini) compared to the pear-shaped ones you see most often in grocery stores in the U.S. These fruits have a thinner skin and fewer seeds, making them perfect for this recipe, which comes from Saveur.

Add remaining oil to pan; fry garlic paste, the paprika, and turmeric, stirring constantly, until fragrant, 1 to 2 minutes. Return shrimp paste to pan; add eggplant and 2 cups water; boil. Reduce heat to medium; simmer, stirring occasionally, until eggplant is tender, 8 to 10 minutes. Serve with rice on the side. 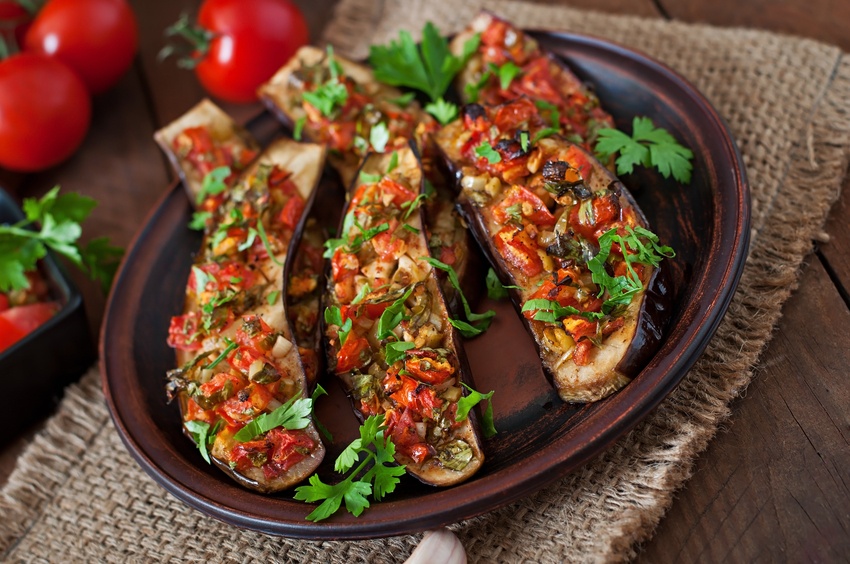 Give peppers a rest and try this easy recipe for stuffed eggplant instead. The eggplants are sliced in half and then filled with a mix of ground beef, pepper, onion, herbs, and cheese for a simple yet hearty meal the whole family will enjoy. Recipe from the Food Network’s Michael Chiarello.

Cut the eggplant in half and scoop out the center, leaving enough meat inside the skin so that it holds its shape when baked. Boil the scooped-out center part until very soft, about 10 to 12 minutes.

Meanwhile, in a medium sauté pan heat 1 tablespoon olive oil over medium heat. Season the beef with salt and pepper. Add the seasoned ground beef to the pan and sauté until all of its liquid is evaporated and the beef begins to brown slightly. Drain the beef, removing the extra, unnecessary fat. Let cool briefly and chop the cooked beef so that there are no large chunks of meat. In another medium sauté pan over medium heat add the remaining 2 tablespoons olive oil and sauté the onions, peppers, and garlic together.

In a bowl mix together the cooked eggplant, vegetables, cooked beef, herbs, 1 cup of the cheese, breadcrumbs, and the egg. Fill the scooped-out eggplant halves with this mixture, dividing it evenly among the 2 halves.

Top with chopped tomatoes and the remaining ¼ cup of grated cheese, season with salt and pepper, place on an oiled oven tray or baking dish, and bake for 50 minutes in preheated oven. Let cool briefly, slice widthwise and serve. 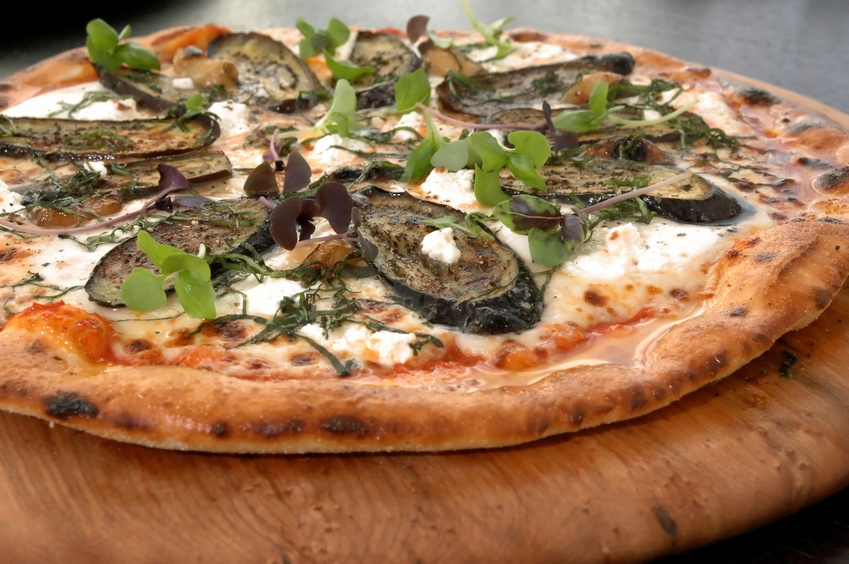 Roasted eggplants make the perfect topping for a simple pizza in this no-sauce recipe from Epicurious. Though this recipe calls for making your crust from scratch, you can skip that step and use a store-bought one if you’re in a rush.

Directions: Cut eggplant into 1/3-inch-thick rounds and arrange in a single layer on a foil-lined large baking sheet. Lightly brush both sides with oil and season with salt. Broil 2 to 3 inches from heat until golden brown and tender, 3 to 8 minutes on each side.

To make the dough, dissolve yeast in warm water. Blend flour and salt in a food processor. Add oil and blend. With motor running, add yeast mixture all at once, blending until dough forms a ball. Knead dough on a lightly floured surface for 5 minutes. Put in an oiled large bowl and turn to coat. Let rise, covered with plastic wrap, in a warm place until doubled in bulk, 1 to 1 ¼ hours. While dough is rising, put a pizza stone on lowest rack of oven (remove other racks) and preheat oven to 500 degrees Fahrenheit.

Dust dough with flour on a floured surface, then shape and stretch into a 12- to 13-inch round. Sprinkle a baker’s peel generously with flour and carefully transfer dough to it. Jerk peel; if dough sticks, lift it and sprinkle flour underneath.

Toss together cheeses and sprinkle one-quarter over dough. Cover with eggplant, overlapping it, and sprinkle with remaining cheese. Heat oil in a small skillet over moderate heat until hot but not smoking, then cook garlic and red pepper, stirring, until just fragrant, 30 to 40 seconds. Spoon evenly over eggplant.

Line up far edge of peel with far edge of stone and tilt peel, jerking it gently. When edge of pizza touches stone, quickly pull back peel to transfer to stone (do not move pizza) and bake until dough is crisp and browned, 12 to 15 minutes. Slide peel under pizza to remove from oven. 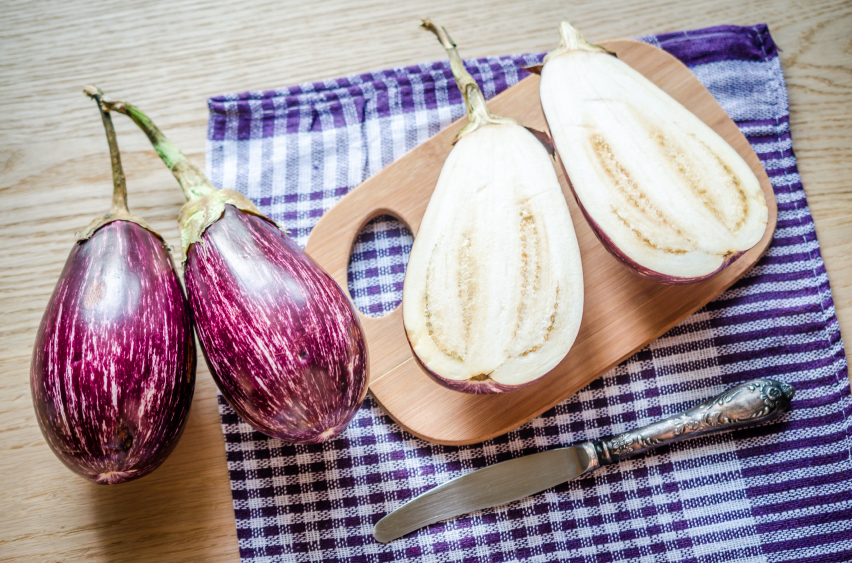 When you need a quick weeknight meal, look to this simple eggplant and chicken stir fry, which will be ready in under 30 minutes. This recipe from Center Cut Cook calls for peeling the eggplant, which means you lose some of the fiber that’s in the fruit’s skin, but it delivers a tastier dish. Before tossing everything in the pan, make sure your chicken and eggplant pieces are all roughly the same size to ensure even cooking.

Add 1 tablespoon of sesame oil to a large skillet and turn heat to medium-high. Once oil is hot, add the chicken and onion to the pan. Cook for 6 to 8 minutes, until the chicken is brown and the onion has softened. 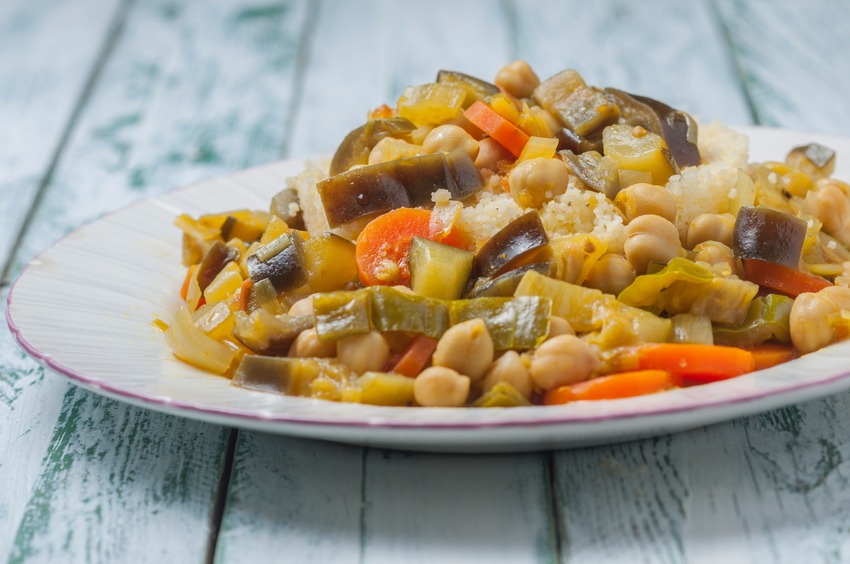 Tagines are traditionally made in lidded earthenware pots (also known as tagines), but you don’t need any special equipment to make this eggplant recipe from Blue Apron. The North African-inspired dish also includes whole-wheat couscous, chickpeas, and ras el hanout, a spice blend used in Moroccan and other North African cuisines. If you can’t find it in your local grocery store, use this recipe to make your own. Curious about the labneh? It’s a cheese made from strained yogurt. You can make it yourself or look for it in specialty stores.

In a small pot, heat 1¼ cups of water and a big pinch of salt to boiling on high. Once boiling, stir in the couscous and remove from heat. Cover and let stand 4 to 6 minutes, or until the water is absorbed and the couscous is tender. Stir in a drizzle of olive oil and season with salt and pepper to taste.

While the couscous cooks, in a medium pot, heat 2 teaspoons of olive oil on medium-high until hot. Add the garlic and ras el hanout; season with salt and pepper. Cook, stirring frequently, 1 to 2 minutes, or until the garlic is softened and the ras el hanout is toasted and fragrant. Add the diced tomatoes; season with salt and pepper. Cook, stirring occasionally, 3 to 5 minutes, or until slightly reduced in volume.

While the tagine cooks, heat a small, dry pan on medium-high until hot. Add the almonds and toast, stirring frequently, 2 to 4 minutes, or until fragrant. Transfer to a small bowl.

In a small bowl, combine the labneh with a splash of water; season with salt and pepper to taste. To plate your dish, divide the couscous and tagine between 2 dishes. Garnish with the toasted almonds, seasoned labneh and mint (roughly chopping the leaves just before adding).