A trip to the grocery story can be a walk down memory lane. You might spot the Lunchables and PopTarts you stopped buying long ago. But sometimes, the most memorable foods are the ones you can’t find on shelves anymore. Food trends come and go, and you probably forgot about the snacks you bought decades ago that are long gone. You can chalk up the loss of your favorite ’90s foods to changing tastes (and nutrition guidelines). Read on for the best ’90s foods you can’t buy anymore.

Think the iconic Cheez Balls from Planters are basically the same thing as the cheese puffs, cheese balls, and cheese doodles you can still find at the grocery store? Think again. Many ’90s kids think Cheez Balls perfected the artificial cheese flavor. They argue modern cheese puffs and cheese curls just don’t compare to this childhood treat (even Utz Cheese Balls, which seem to be the closest alternative on the market). Cheez Balls’ discontinuation in 2006 didn’t stop devoted fans from petitioning Kraft Foods to manufacture them again.

Next: A popular cereal was never the same after being reformulated.

You can still buy Kix at grocery stores. But they won’t taste the same as Berry Berry Kix. In the latter’s coveted cereal box, you didn’t just get round spheres of cereal like regular Kix; you also got pink and purple berry-shaped bites. Conveniently, they turned the milk in your bowl colorful and sugary. General Mills still technically makes Berry Berry Kix. But as this Facebook page explains, the reformulated cereal “tastes disgusting” — nothing like the cereal you ate in the ’90s.

Next: A shortbread-and-fudge cookie’s run was cut short.

Keebler’s Magic Middles cookies featured shortbread with chocolate fudge inside. Complex reports they peaked in popularity in the late ’80s. But they were still around for ’90s kids to enjoy. As Complex explains, “The soft cookie surrounding the spot of fudge is a junk food grail.”

According to a Facebook page — aptly titled “BRING BACK Keebler MAGIC MIDDLE COOKIES!!!” — Keebler planned to “try making Magic Middles and sell them at Wal-Mart.” But then the company changed course; this Wal-Mart product page says the cookies are “no longer available.” With some patience, you can follow this Serious Eats recipe to make your own Magic Middles.

In the ’90s, Pepsi tried a lot of things. Most of them didn’t stick around for long. As Oola explains, Pepsi introduced Pepsi Blue after Crystal Pepsi flopped. Pepsi Blue “was said to be berry-flavored but really tasted more like liquefied cotton candy,” according to the publication. It sounds like something kids would love. But Pepsi Blue didn’t make it in the end.

Next: A bite-sized candy made famous on television

Next: These chips took on a new dimension.

You have to admit Doritos has been nothing if not creative with its snack releases over the years. Doritos 3D were a favorite as soon as they released in the mid-’90s. This food was exactly what it sounds like: puffed chips filled with air and released in a variety of flavors. Frito-Lay discontinued them in the early 2000s. But fans kept petitioning for the company to bring them back. So it did — sort of. Doritos 3D chips are reportedly being produced and distributed in Mexico. However, they won’t taste like the Doritos 3D chips you remember from the ’90s because they have a subtle queso flavor.

Next: This sugary snack is still available in Canada

We can’t talk about ’90s foods without mentioning Dunk-a-roos. Betty Crocker’s snack-sized treat included cookies and icing to dunk them in. Dunk-a-roos’ mascot was a kangaroo, who sometimes appeared on the cookies. A few flavor combinations you might remember? Vanilla icing with chocolate cookies, chocolate icing with graham-flavored cookies, and strawberry icing with vanilla cookies.

General Mills officially discontinued Dunk-a-roos in the United States in 2012. And the company can’t market the snack to children because of nutritional guidelines. But you can still buy the snack in Canada. So General Mills has targeted nostalgic adults with a “Smugglaroos campaign,” encouraging Canadians to share Dunk-a-roos with their American friends and family.

Next: A condiment that helped you play with your food

Bored with your regular red ketchup? Then, you probably lived through the part of the early 2000s when Heinz rolled out strange-colored ketchup in shades, such as Funky Purple, Awesome Orange, Totally Teal, Stellar Blue, and Passion Pink. Fast Company reports the first EZ Squirt was “Blastin’ Green.” The color was “created as a promotional ketchup in support of the first Shrek movie, and moms and kids came running.” Though the ketchups proved wildly popular, they didn’t last long on the market. They were discontinued in 2006.

Next: This frozen treat was a staple of ice cream trucks everywhere

If you loved frozen treats as a kid, you probably remember Flintstones Push-Ups. “Mention the Flintstones Push-Up to any person born in the ’90s, and I guarantee you’ll be met instantly with a wave of nostalgic glee,” Yahoo Food warns. “The cardboard tube with attached push-up stick and the soft, pastel-colored sherbet were truly a match made in summertime heaven.” Orange might have been the most popular flavor. But you could also choose lime or grape. You can still buy Orange Push-Ups. But they just aren’t the same without the Flintstones on the packaging.

Next: A fruity treat just as much fun to play with as it was to eat 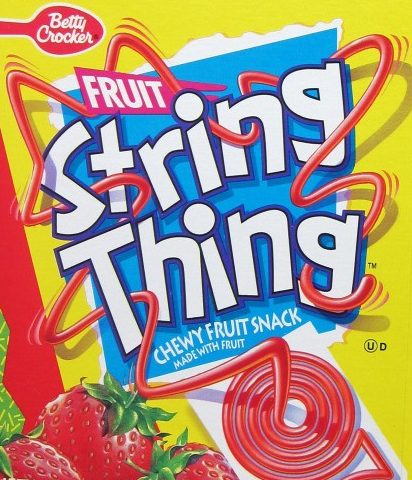 Complex ranks Fruit String Things near the top of its list of the greatest fruit snacks of all time. And we can’t argue with that. These fruit snacks “were much more fun to play with than they were to eat,” the publication explains. “But they were also delicious, don’t get it twisted.” If nothing else, ’90s kids’ love for Fruit String Things — as well as Fruit by the Foot and Bubble Tape — demonstrates that they loved to play with food. Even the General Mills Tumblr admits, “We miss you, String Thing.”

Next: A New Age Coca-Cola product

Even if you weren’t allowed to drink soda, perhaps your parents approved the occasional bottle of Fruitopia, a sugary beverage that came in bright colors and wacky flavors. Atlas Obscura reports Fruitopia “was engineered in response to a threat“: the public’s waning love for soda.

Coca-Cola created the drink in a variety of flavors, with what Atlas Obscura characterizes as “new age-sounding names like Citrus Consciousness, Strawberry Passion Awareness, and Grape Beyond.” The labels featured zen sayings. And after some intense marketing, Fruitopia seemed to be everywhere — at least until its popularity waned and Coke gave up on it in 2003.

Next: The Ghostbusters drink everyone had to have

What do you get when you combine the late-’80s and early-’90s Ghostbusters obsession with kids’ insatiable appetite for sugary snacks and drinks? Hi-C’s Ecto Coolers. The product was actually the same drink as classic Hi-C, just in packaging that took advantage of the Ghostbusters craze. The blatant marketing move sounds strange, but wasn’t (and isn’t) too far out of the ordinary for junk food marketed toward kids.

Complex recalls, “What did a citrus drink have to do with a slimy ghost? Not a damn thing. That’s the open secret of most of the junk food and drinks marketed at children.” Oola reports that “Ecto Coolers became a hit throughout the late ’80s and ’90s.” But despite a brief revival for the Ghostbusters remake, you still can’t buy this beverage anymore.

Nineties kids remember a time when cookies weren’t the only way you could get your Oreo fix. Complex explains Oreo O’s eliminated the temptation to eat way too many Oreos — or they just let you enjoy the taste of the deliciously chocolatey cookies at breakfast. “Fortunately, this cereal alleviated the creme-induced guilt by turning the cookie into a breakfast food.” The cereal launched in 1997 and came in both the classic chocolate flavor, as well as a variation that included marshmallows flavored like Oreo filling. But the cereal was discontinued in 2007 everywhere except South Korea, where you can still purchase it.

Next: An iconic bubble gum brand 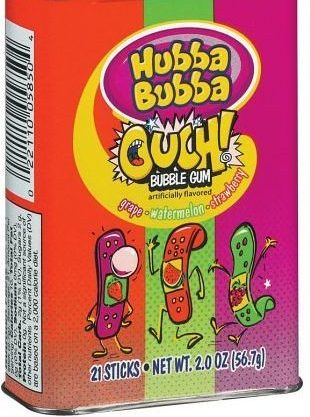 A ’90s favorite, Ouch! Bubble Gum came in a metal box that looked exactly like a Band-Aid tin (except for the neon colors). Each stick of gum — grape, watermelon, or strawberry — was wrapped to look like a bandage. Maybe that wouldn’t be enough to captivate today’s kids (hence its discontinuation). But in the ’90s — the era of Bubble Tape, Bubble Jug, Dubble Bubble, and even Skittles Bubble Gum — apparently all you needed was bubble gum and a gimmicky packaging idea.

Next: Snapple’s attempt at taking on the elements

Remember Snapple Elements? If you drank these fruit-flavored beverages as a kid, you probably recall the most popular flavors: Earth, Rain, Sun, and Fire. Those were the flavors Snapple first introduced. Fire was a dragonfruit flavor, Rain was agave, Earth was grape and cranberry, and Sun was starfruit and orange. But you might have also sampled Meteor, Spark, Turbulence, Atomic, Diet Air, Diet Ice, Velocity, Volcano, Voltage, Sky, Gravity, or Altitude. And maybe you tried the teas that later appeared in the line, including Moon, Lightning, and Infusion.

Next: A beloved fruit snack

When you weren’t drinking soda, you could eat soda-shaped fruit snacks thanks to Soda-Licious. A petition to bring back the snacks claims that “Soda-Licious was one of the best fruit snacks enjoyed by children and adults in the 90’s.” Can’t argue with that, can you? These snacks didn’t pretend to be healthy, unlike many other fruit snacks on the market. That makes us just a little bit nostalgic for that purple box and the delicious gummies inside.

Next: A popular pizza treat

You can still buy Ore-Ida’s Bagel Bites at the grocery store. (Look for flavors like cheese and pepperoni, three cheese, sausage and pepperoni, and supreme.) But it would be a lot harder to get your hands on a box of Stuffed Bagel Bites. These delicious snacks had the pizza toppings on the inside of the dough. They came in flavors, such as pepperoni and cheese and three cheese, and were just as easy to microwave. Cue up Jimmy Fallon’s ode to bagel bites, and you’ll be just as nostalgic as the ’90s kids who petitioned to bring Stuffed Bagel Bites back from the graveyard of discontinued snacks.

Next: These fruity drinks sometimes came in black bottles with mystery flavors

The best ’90s snacks weren’t all solid foods. Squeezits came in a bottle you had to squeeze to enjoy the fruit-flavored drink. Bustle recalls that “with flavor names like Chucklin’ Cherry and Grumpy Grape and the tagline ‘Squeeze the fun out of it,’ it appealed to a crowd that liked to play with their food as much as possible.” You could even find mystery flavors in black bottles, as well as bottles that came with pellets you could drop in to change the drink’s color. General Mills made these fruit-flavored drinks from the 1980s until 2001.

Sure, you can still buy Lunchables. But they definitely aren’t the same as the ones you ate in the ’90s. Take Oscar Mayer’s line of Taco Bell Lunchables as the perfect example. Complex mourns the loss of this particular brand of Lunchable, explaining, “Long before we were frequenting the Taco Bell drive-thru at 3 a.m., we were taking these to school. These D.I.Y. tacos and nachos were built by taking a tortilla (or a chip), topping it with beef product, and smearing it with a packet of red sauce. Yes, we said packet. All Packets Everything.” If that doesn’t take you back to your childhood, we don’t know what will.