Florida prepares for Hurricane Irma by declaring a state of emergency as residents brace for the storm, which strengthened to a Category 5 storm early Tuesday. Landfall is predicted to hit the southeastern state over the weekend.

Hurricane Irma with winds of 179 mph has now officially passed the maximum strength of Hurricane Katrina which had winds of 175 mph. pic.twitter.com/gHLGQklo1I

Florida Gov. Rick Scott declared the state of emergency on Monday for the state’s 67 counties. “Hurricane Irma is a major and life-threatening storm, and Florida must be prepared,” Scott said in a statement. The state was last hit with a hurricane last October, when Category 1 storm Matthew brushed up along its east coast before heading north to make landfall in South Carolina. 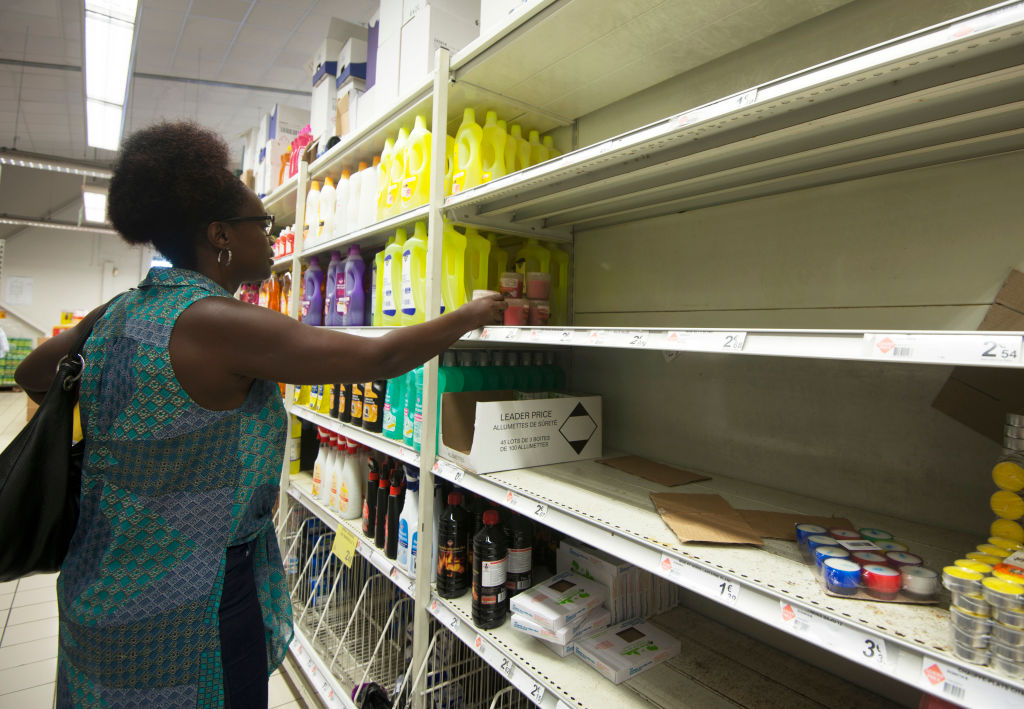 A woman looks at candles in a supermarket in Pointe-a-Pitre, on the French overseas island of Guadeloupe on September 4, 2017, as part of preparations for arrival of Hurricane Irma. | Helene Valenzuela/AFP/Getty Images

Scott urged all Floridians to be prepared Monday evening, tweeting, “I urge all Floridians to remain vigilant and stay alert to local weather and news and visit FLGetAPlan.com today to get prepared.” Earlier, he tweeted further instructions: “Use today to buy hurricane supplies and make sure disaster kits are ready. Be prepared for Hurricane Irma now. floridadisaster.org/supplykit.htm”

Use today to buy hurricane supplies and make sure disaster kits are ready. Be prepared for Hurricane Irma now. https://t.co/ymXjrTHewW https://t.co/RhIgh88tjf

If Irma were to make landfall in Florida, the United States would be hit by two back-to-back major hurricanes, after Harvey battered the state of Texas in August, resulting in catastrophic flooding and 65 confirmed deaths to date.

Tuesday morning, Irma was located about 270 miles east of Antigua and Barbuda, heading west at 175 mph and expected to reach both by late Tuesday or early Wednesday, then possibly hitting the U.S. Virgin Islands and Puerto Rico on Wednesday afternoon, reported CNN.

The National Hurricane Center identifies a Category 5 storm as having winds over 157 mph. “Catastrophic damage will occur,” the center says in a description of this level of storm. “A high percentage of framed homes will be destroyed, with total roof failure and wall collapse. Fallen trees and power poles will isolate residential areas. Power outages will last for weeks to possibly months. Most of the area will be uninhabitable for weeks or months.”

“Irma is now one of the strongest hurricanes we have witnessed in the last decade as a Cat 5 storm with winds of 175 mph,” tweeted Fox News Senior Meteorologist Janice Dean.