18 Foods Banned Around the World

No two people have the same favorite foods. (Though lots of us do choose the same comfort foods.) But did you know some foods are so bad that the United States government — or governments around the world — have decided to ban them?

Americans eat many foods other countries have banned and vice versa. Some of these banned foods are unhealthy, or even dangerous, to eat. And the production of others endangers the animal populations involved. Other banned foods are just kind of weird. Curious about which foods are banned and why? We’ve collected some of the most interesting examples of banned foods, including some you’ve probably eaten more than once.

The U.S. banned haggis back in 1971, according to the BBC. That’s when the USDA forbade sheep lung, one of the key ingredients of haggis, in food products. British politicians have repeatedly tried to get haggis back on American menus. Scotland’s national dish takes the form of a savory pudding. It contains the sheep’s heart, liver, and lungs. We admit haggis doesn’t sound all that appetizing, but clearly some Americans disagree. Just take Alton Brown, who offers his own recipe for the dish. (For the record, his recipe uses the tongue instead of the lungs.) 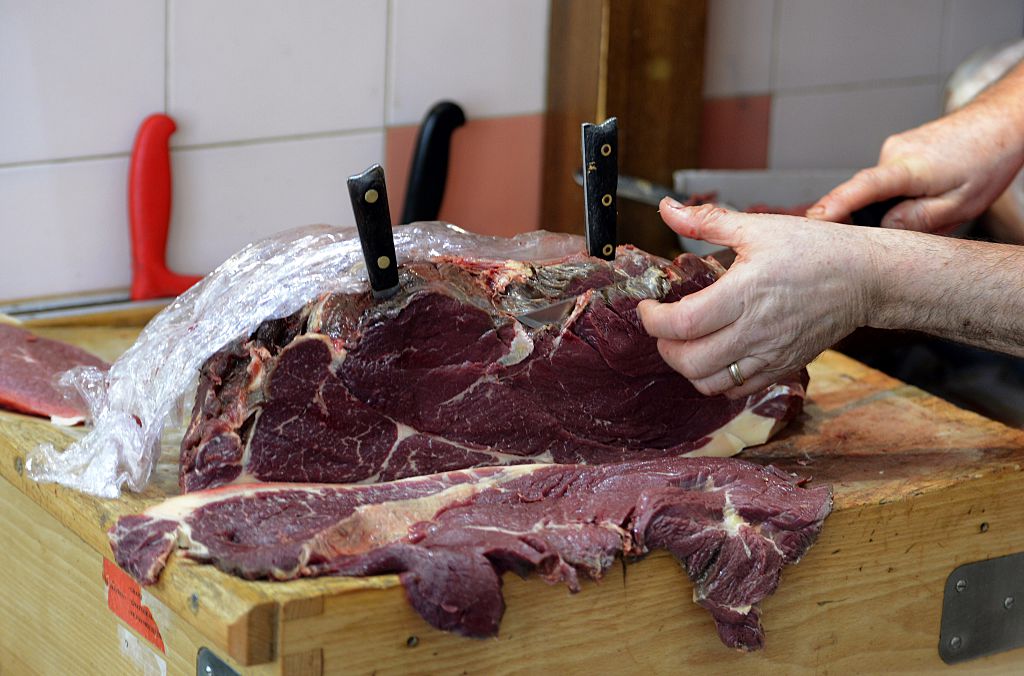 According to Smithsonian Magazine, the U.S. hasn’t outlawed eating horse meat. But the government has traditionally forbidden the slaughtering of horses. Snopes reports that a U.S. spending bill technically opened the door for horse slaughterhouses to reopen. How did that happen? The bill lifted a ban on using federal funds to inspect horse slaughterhouses. However, regulators have no extra money to fund inspections. So far, they’ve seen little interest in the production of horse meat. And that probably won’t change very soon. According to the Smithsonian, the array of antibiotics and drugs given to horses “makes them unfit for our plates.”

A couple of countries have banned farm-raised salmon. | iStock.com/g215

Farm-raised salmon sounds like a healthy food. After all, seafood offers numerous health benefits. But things aren’t always as they seem. Spoon University notes that Australia and New Zealand have banned this kind of salmon, typically labeled “Atlantic salmon.” Toxins and antibiotics are featured heavily in the fishes’ diet, as are smaller fish that can be contaminated. Consequently, salmon retain chemicals that might cause eyesight damage and cancer in people who regularly consume these fish. Furthermore, if you’re concerned about the environmental issues associated with salmon farming, you should avoid farm-raised fish. Seafood Watch recommends opting for wild salmon from responsible producers. 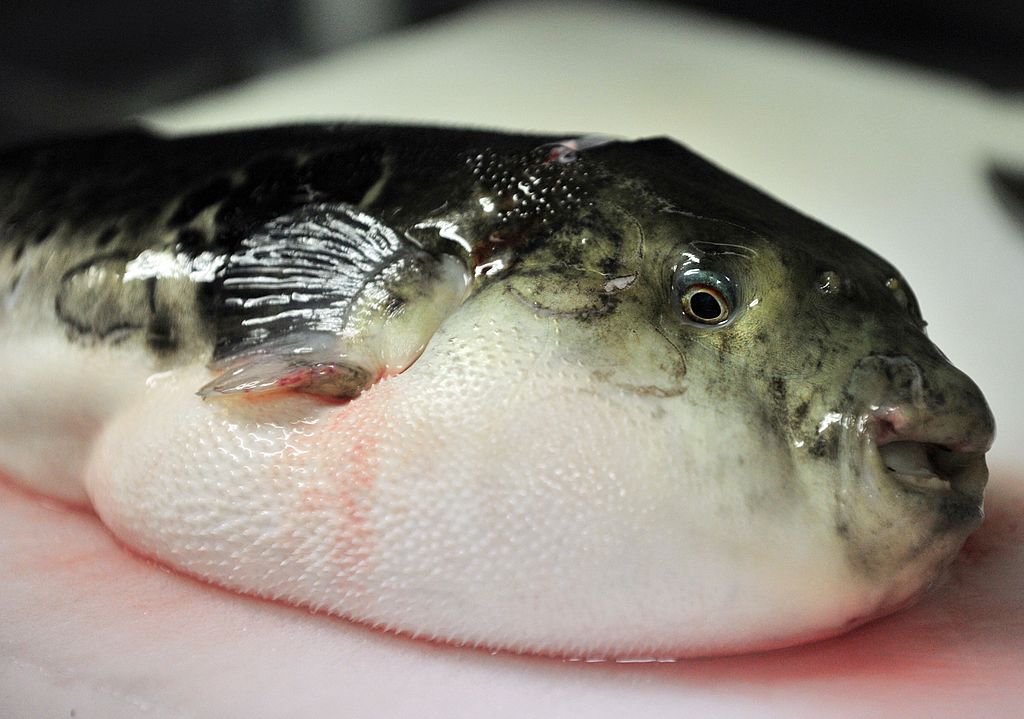 Pufferfish is a delicacy in Japan but difficult to find in the U.S. | Shikazu Tsuno/AFP/GettyImages

Fugu, or pufferfish, is a Japanese delicacy that’s all but banned in the U.S. The BBC reports that fugu “is so poisonous that the smallest mistake in its preparation could be fatal.” That might sound like an exaggeration. But the intestines, ovaries, and liver of fugu contain a poison called tetrodotoxin. Time reports that the chemical is “1,200 times deadlier than cyanide.” The U.S. doesn’t technically ban fugu. But chefs have to train for two to three years to obtain a fugu-preparing license. The upshot? Fugu is both dangerous and expensive to try in one of the few restaurants that serve it.

Genetically engineered food is a pretty controversial topic on its own. But genetically engineered papaya is especially so — to the degree that it makes the list of banned foods. USA Today reports that “about 60% of the papaya grown in the United States, all in Hawaii, has been genetically engineered to allow it to withstand the ringspot virus.” Scientific American reports that the European Union banned imports of genetically modified crops for 20 years. But the World Trade Organization ruled the ban violated trade rules. Still, countries, including Japan and South Korea, distrust even Hawaii’s organic papaya. That illustrates just how controversial the United States’ only commercially grown GMO fruit has become.

The Jamaican fruit ackee is one of the banned foods in the U.S. | iStock.com

Curious about which banned foods you can’t find in the United States? There’s probably no better place to start than ackee, the national fruit of Jamaica. BuzzFeed reports the fruit is traditionally boiled and cooked with salted cod. Ackee is safe to eat if it’s ripened properly. But unripe ackee is high in hypoglycin A and B. These toxic compounds cause Jamaican vomiting sickness, which at its most severe can result in coma or death. As a result, the FDA banned all ackee until 2000. At that point, a few manufacturers were approved to sell either frozen or canned ackee to U.S. consumers. Yet the import of fresh ackee is still banned.

The U.S. has banned cheese made with fly larvae. | iStock.com

Would you ever try cheese that’s full of fly larvae? The U.S. government wants to make sure you don’t get your hands on it. Smithsonian Magazine reports that casu marzu, a Sardinian cheese, is forbidden in the States. Producers make casu marzu by introducing fly larvae into pecorino, a hard cheese. The larvae promote “advanced fermentation.” Then, as they hatch, they eat through the cheese. The idea is that cheese connoisseurs will eat the softened cheese before the maggots die. Perhaps they do — but not in the U.S.

The wealthy class has long served caviar, or salt-cured fish eggs. But if regular caviar wasn’t enough of a delicacy, there’s Beluga caviar, produced in the Caspian Sea. The United States Fish and Wildlife Service has banned imports of beluga caviar because beluga whales are considered “critically endangered” under the Endangered Species Act. The New York Times reports that populations have declined by up to 90%. Black Sea fisheries once provided more than 40% of the beluga caviar imported to the U.S. But beluga caviar now makes the list of banned foods as conservation efforts take priority.

Because many shark species are threatened, shark fins are banned in several states. According to the World Wildlife Fund, people use shark fins to make Asian soup. Consequently, humans kill around 100 million sharks annually. And unfortunately, overfishing depletes populations worldwide. So regulators are acting. BuzzFeed reports that the Shark Finning Prohibition Act of 2000 and the Shark Conservation Act of 2010 strengthen conservation efforts. Furthermore, the Shark Fin Trade Elimination Act of 2016 would make it illegal to “possess, buy, sell, transport, or trade shark fins or any product containing shark fins.” 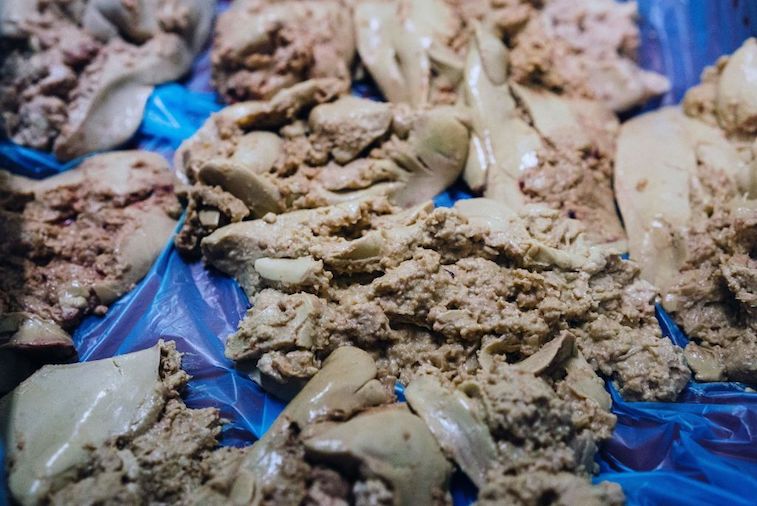 Foie gras means “fatty liver” and refers to ducks or geese that are force-fed pounds of grain to make their livers swell. Unsurprisingly, animal rights groups have a major problem with this so-called delicacy. PETA reports that birds force-fed by the foie gras industry have a mortality rate up to 20 times that of a control group. Another problem with the industry? Foie gras is made only from male birds, so female chicks are inhumanely killed to be processed into cat food. Consequently, California has banned foie gras. But a federal judge overturned the ban in a move that activists are sure to challenge.

Smithsonian Magazine reports that raw milk is a controversial addition to the list of banned foods. Raw milk simply refers to unpasteurized milk. Many people actually consider raw milk to be a healthier option. But the CDC warns that “raw milk can carry harmful bacteria and other germs that can make you very sick or kill you. While it is possible to get foodborne illnesses from many different foods, raw milk is one of the riskiest of all.” Raw milk can cause diarrhea, stomach cramps, and vomiting. And in rare cases, it can also cause kidney failure, paralysis, and death. Consequently, about half of the states in the U.S. forbid the sale of raw milk.

A surprising addition to the list of banned foods in the United States are Kinder Surprise chocolate eggs. These Italian sweets feature a tiny toy hidden in a plastic capsule. But as Der Spiegel reports, a 1938 U.S. law bans inedible objects inside food products. The idea behind that law? Small children might not know there’s something inside, so the toy could pose a choking hazard. Each year, U.S. customs seizes tens of thousands of Kinder eggs from people’s luggage. Fans of the chocolate have petitioned the government to change its stance. Yet such petitions have been unsuccessful so far.

Many American foods include artificial food dyes. But Spoon University reports that governments in Austria, Finland, France, Norway, and the United Kingdom have banned these dyes. Researchers blame the petroleum-based chemicals in food dyes for serious health problems, including brain tumors and hyperactivity. Additional noteworthy correlations are other cancers, allergic reactions, and nerve cell deterioration. Talk about a great reason to opt for naturally colored snacks and desserts.

Many countries have banned bread with potassium bromate. | iStock.com/gashgeron

Next up on the list of banned foods is bread. (And you thought carbs were only off limits to followers of celebrity-endorsed diets.) LiveScience reports that many American bread manufacturers use an oxidizing agent called potassium bromate to bleach bread dough and increase its elasticity. The addition of potassium bromate yields soft, fluffy bread. But it can cause cancer in the thyroid and kidneys if you consume enough of it. Some bakeries have stopped using it. But others, including those that make fast food buns, still use it. Potassium bromate is banned in Brazil, Canada, China, and Europe.

Brominated vegetable oil, or BVO for short, sounds like something you’d want to avoid. And it definitely is. The Mayo Clinic reports this additive keeps the citrus flavoring from separating in sodas and sports drinks. This controversial ingredient is banned in Europe and Japan but not in the United States. BVO contains bromine. That’s worrying because bromine seems to build up in the body. The Mayo Clinic notes that only a few studies have investigated potential safety issues. Yet some reports have suggested excessive amounts of soda containing BVO can lead to memory loss, skin issues, and nerve problems.

The name ractopamine sounds just as scary as this chemical actually is. This feed additive either accelerates weight gain or promotes leanness in animals, depending on the dosage. But researchers determined that ractopamine might cause tachycardia and other cardiovascular effects in people. Consequently, ractopamine has been banned in China, Europe, Russia, and Taiwan. Yet the United States continues to allow it. That means you’re probably buying ractopamine-laced pork and beef.

Canada and the EU have banned milk with rBGH. | iStock.com

Thinking this one sounds scary right away? You’re not far off. Health.com reports that ever since the FDA approved recombinant bovine growth hormone, or rBGH, people have worried about it. This synthetic hormone increases milk production in dairy cows. By itself, rBGH has little effect on humans. Yet researchers worry that manipulating growth hormones in cows might increase another hormone called insulin-like growth factor. That, in turn, could mimic the effects of human growth hormone in some harmful ways, such as increasing your risk for prostate cancer or breast cancer. The American Nutrition Association notes that Canada and European nations have banned rBGH. But the U.S. has not.

Some countries ban snacks with the fat substitute olestra. | iStock.com/Magone

A particularly scary thing about the foods we eat is we’re almost never familiar with all of their ingredients. An example of an ingredient you might have never heard of is Olean. It’s the brand name of olestra, a fat substitute manufacturers use in snacks, such as potato chips. Olean adds no fat, calories, or cholesterol. It seems like a great invention, especially if you’re shopping for fat-free snacks. But the ingredient came under fire for causing severe side effects, including diarrhea, flatulence, stomach cramps, and greasy stools. As a result, regulators in Canada and the United Kingdom decided to ban it. Due to the side effects, they’ve also added snacks that use olestra to the list of banned foods.