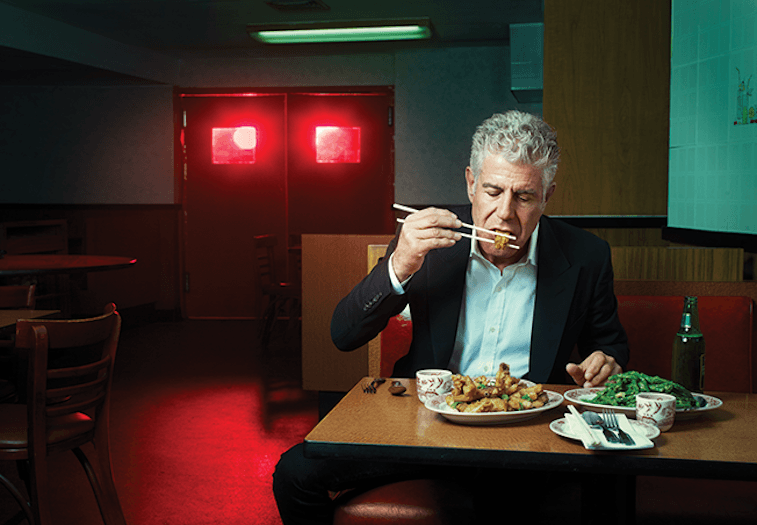 It’s no secret Anthony Bourdain had a history of criticizing chefs and their dishes. He may have inspired you to try new things, but the sharp-tongued chef and Parts Unknown host had his limits when it came to many foods and drinks. Check out the foods and beverages Bourdain insulted over the years, including one popular sandwich he despises (on page 10).

Bourdain hates ranch dressing. And he can’t understand why Americans love it. | iStock.com

First We Feast asked Bourdain his opinion on Ben Adler’s statement, “Ranch dressing is what’s wrong with America.” Bourdain responded, “You know, if you ranch something, does it make it better? Probably not. It’s not a flavor I particularly understand. But I can well imagine circumstances where I might think like, ‘This ranch is, like, totally awesome.’ Probably all alone with no one watching.”

Next: If Bourdain can’t handle this dish, can anyone?

Some people like their fried chicken extra hot. Bourdain definitely isn’t one of them. | iStock.com/husayno

When Bourdain did a Reddit “Ask Me Anything,” he revealed he doesn’t understand extra-hot fried chicken. Asked about his Parts Unknown experiences, he mentioned eating “Nashville Hot Chicken,” which is seasoned liberally with cayenne pepper. “That was truly, truly terrifying,” Bourdain said. “… Unless you’ve got three or four days to spend in a bathroom, I really advise against that.”

Next: Bourdain wasn’t afraid to call out fancier foods.

Bourdain hates the taste of truffle oil. (And it’s not even made from truffles.) | iStock.com

An ingredient Bourdain slammed on The Tonight Show: truffle oil. The chef said it’s a horrible ingredient “about as edible as Astroglide and made from the same stuff.” Bourdain might not be far from the mark.

As Serious Eats explains, truffle oil isn’t actually made from truffles. “It’s made from an organic compound called 2,4-Dithiapentane — derived either naturally or from a petroleum base — mixed with olive oil.

Next: Bourdain insulted one of America’s favorite drinks.

Many people love tasting and analyzing craft beer. But Bourdain definitely isn’t one of them. | iStock.com

Speaking to Adweek about his beer consumption on Parts Unknown, Bourdain admitted, “I don’t drink the best beer in the world on the show. It’s a problem that comes up a lot actually.” He explained, “The angriest mail I get is from beer nerds — people who are craft beer enthusiasts and see me drinking a cold, available beer from a mass production. And they get really cranky with me, and they assume that I’m plugging it or something. In fact, I just like cold beer, and my standards rise and fall depending on access to cold beer.”

The chef told Thrillist, “I haven’t made the effort to walk down the street 10 blocks to the microbrewery where they’re making some Mumford and Sons IPA.”

Next: Bourdain criticized what was possibly the biggest food trend of the last decade.

Though he admits to liking bacon, Bourdain doesn’t approve of adding bacon to everything — even to your burger. | iStock.com/rez-art

Remember when bacon appeared on everything from burgers to ice cream? Bourdain told the LA Times, “I love bacon, but I don’t think we need it on everything. I think there’s a tendency to over-jack and over-umami food these days.”

Next: Lunch-goers everywhere rethought their orders.

It seems like a safe thing to order at just about any restaurant. But Bourdain doesn’t understand the American taste for chicken Caesar. | iStock.com

Chicken breast served over a Caesar salad, aka Chicken Caesar, appears on Bourdain’s Crimes Against Food list. The chef writes, “Why? They’re going to cook the chicken to sh*t anyway.” In his cookbook, Appetites, Bourdain warns readers, “God does not want you to put chicken on your Caesar.”

Next: Heinz will do just fine.

Bourdain is not impressed by restaurants that make their own ketchup. In fact, he’d rather have the cheap bottled stuff. | iStock.com/Miroha141

The chef avoids the house-made ketchup you find at an increasing number of U.S. restaurants. “You have to find a house-made ketchup that’s better than the platonic idea of ketchup,” Bourdain explained. “Which is the same cheap ass ketchup you always had.” When ordering a burger or hot dog, he steers clear of any ketchup a restaurant makes itself. “I love hot dogs,” he said. “I like ketchup, but together they’re a problem!”

When it came to light that President Donald Trump orders his steak well-done with ketchup, the food world collectively shuddered. Bourdain told Town and Country, “It hurts me. I think that’s a window into his soul. Anyone who’s that indifferent to food is problematic for me.”

He continued, “As a chef, it always hurt me if I was serving a nicely aged côte de boeuf, and I heard they dumped ketchup all over it — that hurt me too. Something died inside me.”

Next: A breakfast with none of the comforts from home.

The chef confessed to Thrillist his disdain for home fries is “rooted in the fact that, for most of the low points of my professional career, I was a breakfast or a brunch cook … It’s the smell of failure.” Bourdain also hates the preparation: “You make them in huge amounts, and you re-heat them,” he said. “Most of the home fries I have in diners are not good, they’re not cooked all the way through, they’re not crisp.”

Bourdain is skeptical of potatoes for breakfast in general. “I’m hardly an advocate for healthy living, but it seems to me a big pile of buttered toast is good, bacon is good, sausage is good, eggs is good. Do we really need the potatoes also? I’m not convinced that we do.”

It’s not just you. Bourdain also really hates that third slice of bread in the middle of a club sandwich. | iStock.com

In Bourdain’s cookbook, Appetites, the chef compares the club sandwich to Al Qaeda. He explains, “I’m really irritated by that useless middle slice of bread on the club sandwich. It’s been there forever; it’s not a trend. It’s lasted for decades and why, when we can so easily dispense with it?”

As Thrillist reports, Bourdain has ranted against the club sandwich before. On his Crimes Against Food list, the chef wrote, “You know who invented the middle slice? Enemies of freedom. Their mission? Sap our will to live by ruining our sandwich experiences through ‘tectonic slide.'”

Next: Perhaps the greatest food lie of all time

Hate the audacity of Kobe sliders? Bourdain does, too. | iStock.com

Adweek asked Bourdain which food trends he would “call bullsh*t on.” The chef answered, “Have we mentioned Kobe? You know, Kobe meatballs, Kobe sliders, Kobe burgers? That’s always bullsh*t.” It’s not the only time the chef criticized what Forbes calls “the great Kobe beef lie.” (Feeling lost? Many restaurants claim to offer Japanese Kobe beef. But if they did have this coveted meat, they wouldn’t make it into burgers.)

Bourdain said, “There is no food crime worse — in fact the very epicenter of douchedom is the Kobe slider. If you see Kobe slider on a menu at a restaurant that you’ve walked into, turn on your heels and leave.”

Next: Bourdain ruined our appetites with this food.

Bourdain wasn’t shy about his disdain for hollandaise sauce and other brunch foods. | iStock.com/SoLeaux

In his book Kitchen Confidential, Bourdain wrote brunch is “a dumping ground for the odd bits left over from Friday and Saturday nights.” He continues, “How about hollandaise sauce? Not for me. Bacteria love hollandaise. And nobody I know has ever made hollandaise to order … Remember, brunch is only served once a week — on the weekends. Cooks hate brunch.”

Next: The time Bourdain enraged a whole state

Bourdain has some strong words for Frito pie. | iStock.com

Bourdain famously insulted the Frito pie from the Five & Dime General Store in New Mexico on Parts Unknown. He explained the dish as “canned Hormel chili and day-glow orange cheeselike substance dropped … right into a bag of Fritos.” He added, “In just six minutes, I’ve achieved a depth of self-loathing that it usually takes a night of drinking to achieve.”

Later, Adweek asked Bourdain about the episode (and the subsequent backlash from offended New Mexicans). He replied, “You know, late at night, stoned, I will very much enjoy some Frito pie, but I don’t think a human alive could honestly look at a camera and not confess that if you’ve ever cleaned up after a dog … that sort of wet, warm heft in hand. I knew that dead weight well.”

Next: Perhaps the most loved (and hated) fall trend

Bourdain most definitely does not approve of your pumpkin spice latte. | Starbucks

Pumpkin spice lattes, pumpkin beer, and pumpkin pastries … This gourd plant appears everywhere each fall. But Bourdain had none of it. In his AMA, the chef identified pumpkin spice a trend he’d like to die. He wrote, “I would like to see the pumpkin spice craze drowned in its own blood. Quickly.”And USA Today reports Bourdain once said of the pumpkin spice trend, “I’m deathly against it.”

Next: Even God is against this food, according to Bourdain.

Bourdain mentioned the brioche bun isn’t the right choice for a burger; it even received an entry on his Crimes Against Food list. The chef wrote, “The hamburger bun is designed to absorb grease, not add greasiness to the experience. A proper hamburger bun should retain its structural integrity, playing its role as delivery vehicle for the meat patty until the last bite. The brioche bun, woefully unsuitable for this role, crumbles.” Ultimately, Bourdain concluded, “God is against the brioche bun.”

Next: Don’t put yourself through this food act, according to Bourdain.

During his Reddit AMA, Bourdain identified food trends he wishes would die. Juice cleanses were one. He wrote, “I don’t understand the juice cleanse. I mean, if you’ve ever had a colonoscopy, the doctor gives you something that will cleanse you right quick, so I don’t really understand juice cleanses.”

Bourdain also mentioned it to Thrillist. He repeated his lack of understanding about the “herd mentality around juice-cleansing.” He did admit, “These people are selling little bottles of coconut water for like, two and a half bucks. … At least people are thinking about what they’re putting in their mouths. So, I mean, I guess that’s positive.”

Next: Most doctors side with Bourdain on this food trend.

Gluten-free pasta might impress some people. But not Bourdain. | iStock.com

Few doctors would recommend a gluten-free diet without a medical reason. In fact, a recent study found restricting gluten can have harmful health effects on people who don’t have celiac disease. Bourdain told Adweek, “Look, before you start boring me to death at a party about how you got gluten-free, you know, if you think you have a disease as serious as celiac disease, shouldn’t you see a f*cking doctor before you make this big move?” He added, “I don’t think half of these people even understand what they’re talking about.”

Next: The ultimate nightmare for Bourdain

Bourdain hates the Unicorn Frappuccino, too — and Starbucks, for that matter. | Starbucks

Town and Country asked the Parts Unknown host for his thoughts on the Unicorn Frappuccino: “Wow, that’s like four things I hate all in one sentence: Starbucks, unicorns, and the colors pink and purple,” Bourdain replied. “Also a Frappuccino! It’s the perfect nexus of awfulness. Just add pumpkin spice to that mix, and you can nuke the whole county.”