Few things in life are as wonderful as kicking back to watch your favorite NFL teams on Sundays, but the experience loses a little of its luster when you find yourself eating mediocre takeout. That’s where our Game Day Grub series comes in. Each week, we’ll bring you seven recipes for some of your favorite football foods. It’s going to be a delicious season.

Once the football starts to stretch into the the colder months, chilled foods don’t cut it anymore. While many of the eats typically associated with football are hot, nothing warms you up from the inside like a steaming bowl of soup. Because this food category is so broad, there’s one for every diet and palate. Get started with these seven rib-sticking recipes. 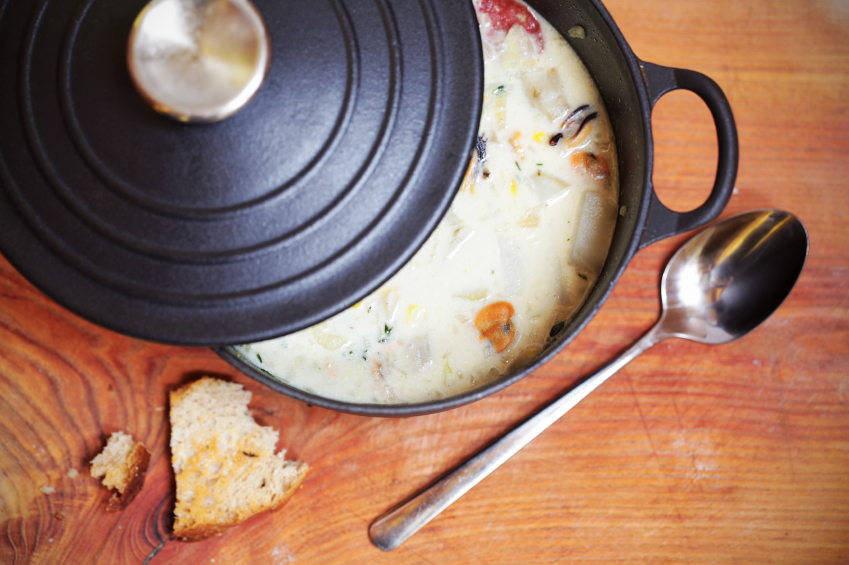 The name of this recipe will surely draw criticism from some folks, especially those loyal to Manhattan clam chowder, but skeptics might change their mind after they get a bite of this soup from The New York Times. It’s rich without being too thick, and minimal ingredients help it come together in no time. This recipe also gets major points for using fresh clams instead of the canned variety. Be sure to rinse the shellfish a few times before beginning so you don’t end up with sandy soup.

Directions: Put the clams in a large, heavy dutch oven, add 4 cups of water, then set over medium-high heat. Cover and cook until clams open, about 10 to 15 minutes. Discard any that don’t open. Strain broth in a sieve lined with cheesecloth or paper towels and set aside. Remove clams from shells and set aside.

Rinse out the pot, then return to the stove. Add butter and turn heat to medium low. Add bacon and cook, stirring occasionally, until fat renders and pork browns, about 5 to 7 minutes. Remove bacon and set aside.

Add leeks to bacon fat and cook, stirring frequently, until softened but not brown, about 10 minutes. Stir in potatoes and wine. Continue to to cook until wine evaporates and potatoes start to soften,  about 5 minutes. Add enough clam liquid just to cover. Reserve any additional liquid for another use. Add thyme and bay leaf to the pot, partially cover, and simmer until potatoes are tender, about 10 to 15 minutes.

Chop clams into small pieces, then stir into soup along with cream. Season with pepper, remove from heat, and fish out thyme and bay leaf. Let sit for a few minutes, then serve garnished with parsley. 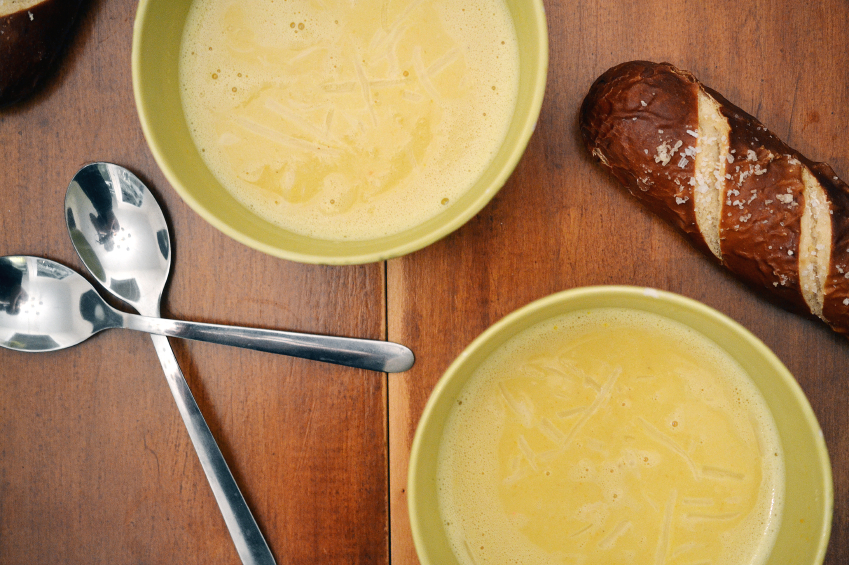 Though most people love the two main ingredients in beer cheese soup, it’s often a gross, gloppy concoction. Epicurious gets it right with this dreamy cheddar and ale soup. Sharp cheese, some basic veggies, Worcestershire sauce, and mustard power ensure a flavorful finished dish that’s just rich enough. A little bit of salty bacon crumbled over the top makes it even better.

You don’t have to break the bank on cheese for this soup. In fact, the super pricey ones that have been aged for years might not be the best choice since they can have a little bit of a granular texture. Ask for something sharp that melts well. Also, avoid pre-shredded cheddar. Most of these products contain cornstarch or potato starch, which will leave your soup too thick.

Directions: Wash leeks in a bowl of cold water, agitating with hands to remove grit. Lift leeks out of water and drain in a colander.

Add cheese by handfuls, stirring, and cook until cheese has melted, 3 to 4 minutes, being careful not to boil. Discard bay leaf. Serve sprinkled with bacon. 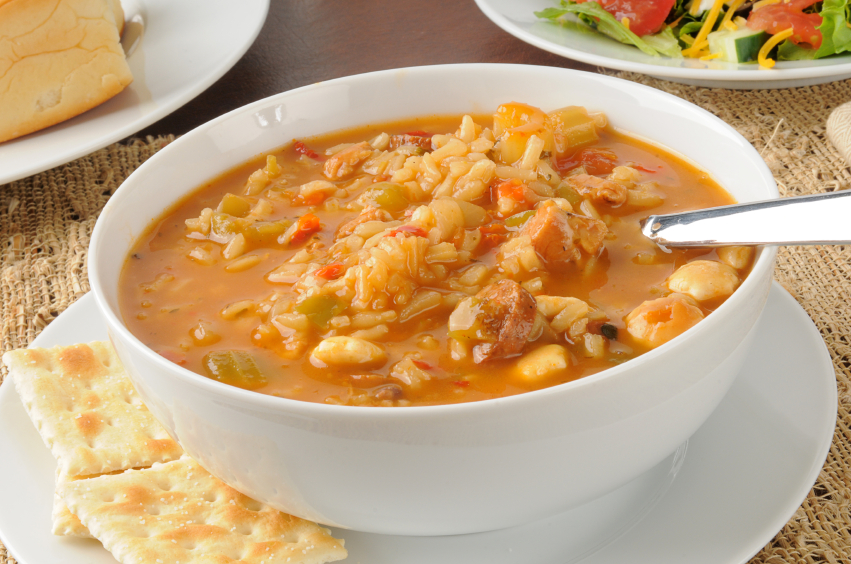 Gumbo is one of those recipes that can take the better part of a day. Food & Wine keeps the flavor, but simplifies the method with this faster chicken and sausage version. Seafood lovers will want to try stirring in some small shrimp or crab during the last few minutes of cooking. If you can’t find frozen okra in your grocery store, check the canned food aisle. Just drain and rinse the canned veggies before adding them to the soup.

Directions: In a large stainless-steel pot, heat oil over medium heat. Whisk in flour and cook, whisking, until beginning to brown, about 4 minutes. Reduce heat to medium low. Stir in the onion, celery, and bell pepper. Cook, until beginning to soften, about 7 minutes. Add okra, bay leaf, thyme, oregano, salt, black pepper, cayenne, and tomatoes. Cover and cook for 5 minutes.

Stir in broth and smoked sausage. Bring to a boil, reduce heat, and simmer for 15 minutes. Add chicken and simmer just until cooked, 4 to 5 minutes longer. Remove bay leaf.

Meanwhile, bring a medium pot of salted water to a boil. Stir in the rice and boil just until done, about 10 to 12 minutes. Drain. Serve rice in bowls and ladle gumbo over the top. 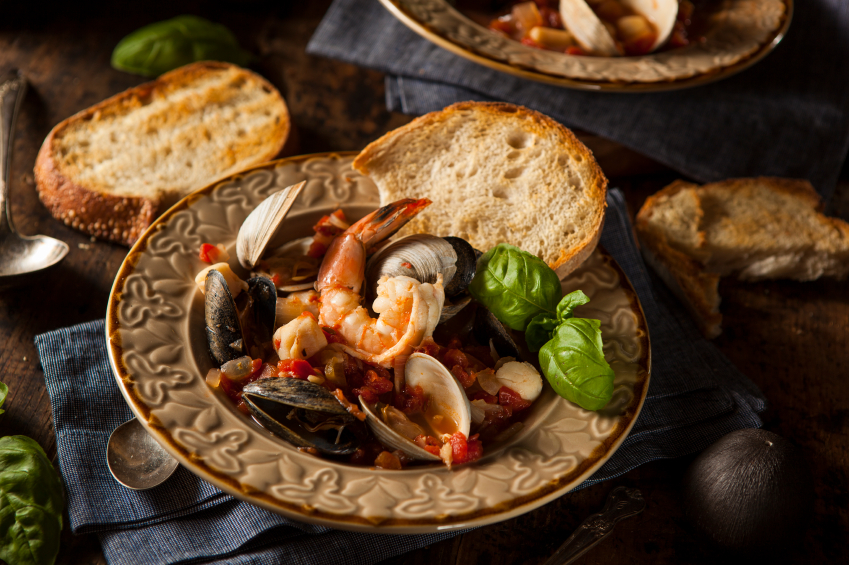 The combination of garlic, tomatoes, and chile flakes might lead you to believe this seafood stew originated in Italy. While it’s true Italian fishermen created this flavorful dish, it was actually invented in San Francisco at the end of the 19th century. Since this location is also known for sourdough, a bowl often comes with a few slices of the toasted bread.

This fast version from Serious Eats is one of the easiest recipes you’ll find, and the flavor certainly doesn’t suffer. For a more intense seafood flavor, use clam juice instead of chicken broth. And feel free to substitute whatever fish and crustaceans look good at your market.

Add crab and stir to combine. Add stock and tomatoes. Bring to a simmer and season with salt and pepper. Stir in fish, scallops, shrimp, and clams. Cover and simmer until clams open and all seafood is cooked, about 10 minutes. Sprinkle with scallions and serve with bread. 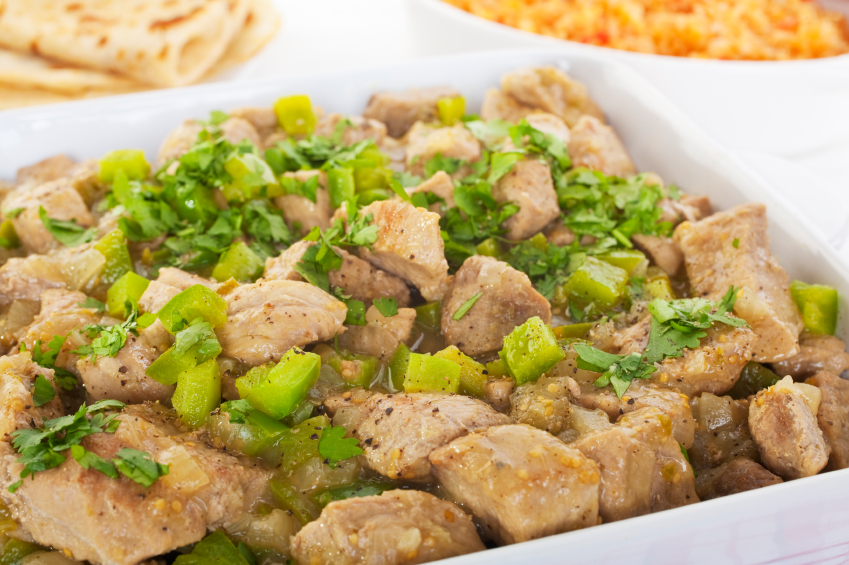 We’ve already covered most of your basic chili needs, so it’s time to bring the stew’s green cousin to the spotlight. The Kitchn’s pork stew gets its green hue from tomatillos and green chiles. These ingredients also create a flavorful broth that’s just a little bit tart. A red chile salsa makes a great topping that also adds an impressive pop of color. Try this one from Saveur.

Directions: Preheat boiler and arrange oven rack a few inches away. Place chiles on a sheet pan and cook, turning occasionally, until charred all over, about 15 to 20 minutes. Wrap peppers in aluminum foil in bundles of three or four. Set aside.

Meanwhile, broil tomatillos until charred, flipping once, about 5 to 10 minutes. Peel tomatillos and chop. Stem and seed the chiles, then chop.

Heat a few tablespoons of bacon grease or oil in a Dutch oven over medium-high heat. Pat pork dry with paper towels and season with salt and pepper. Working in batches, brown pork until deeply colored on all sides, 3 to 4 minutes per batch. Remove with a slotted spoon to a large bowl, and continue with remaining pork.

Reduce heat to medium, add onions, and cook until soft, 5 to 7 minutes. Add garlic, cumin, oregano, and bay leaves. Stir until incorporated, about 1 minute. Add vinegar, and scrape bottom of the pan with a spoon to remove browned bits. Add chicken stock, peppers, and tomatillos. Bring to a boil, reduce heat, cover, and simmer until pork is tender, 2 to 2½ hours.

Peel and dice potatoes. Add to stew and cook until tender, about 30 to 40 minutes. Season stew with salt and pepper. Serve with rice or tortillas and garnish with cilantro. 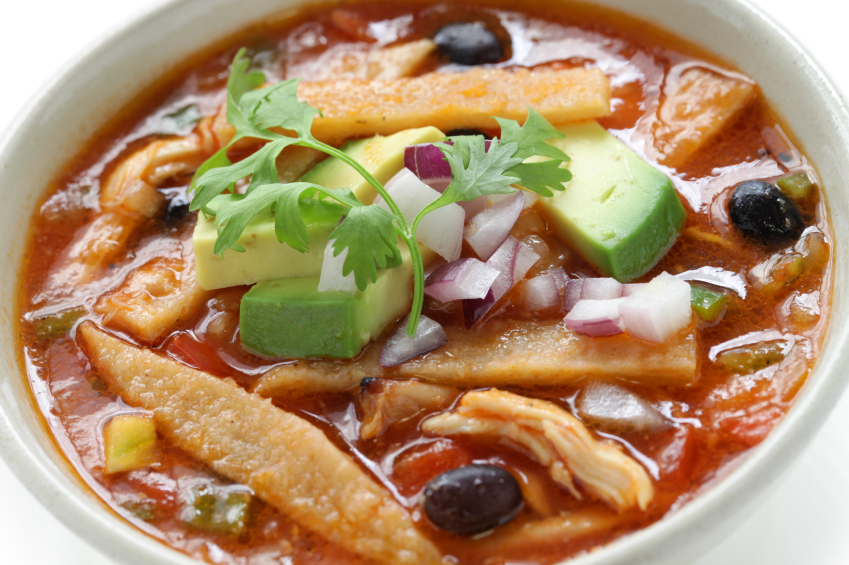 Gimme Some Oven uses a slow cooker to turn this restaurant favorite into an incredibly simple recipe you can make any time. Just add everything to the insert, then set it for low or high based on your schedule. Finally, remove the chile pod, shred the chicken, and this meal is ready.

The soup alone is pretty spectacular, but the real fun of chicken tortilla soup comes with the toppings. If you’re having company, keep the slow cooker on the warm setting and set up a topping bar with tortilla chips, avocado, sour cream, salsa, shredded or crumbled cheese, cilantro, lime wedges, sliced radishes, and finely chopped red onion. Guests can ladle their own portions and customize however they want.

Directions: Add all ingredients except for the lime wedges to the insert of a slow cooker and stir to incorporate. Cook soup for 3 to 4 hours on the high setting or 6 to 8 hours on the low setting. Remove chicken from the soup and use two forks to shred into bite-size pieces. Fish out chiles, then return chicken to the soup. Stir to combine. Season with fresh lime juice. Serve with your choice of toppings. 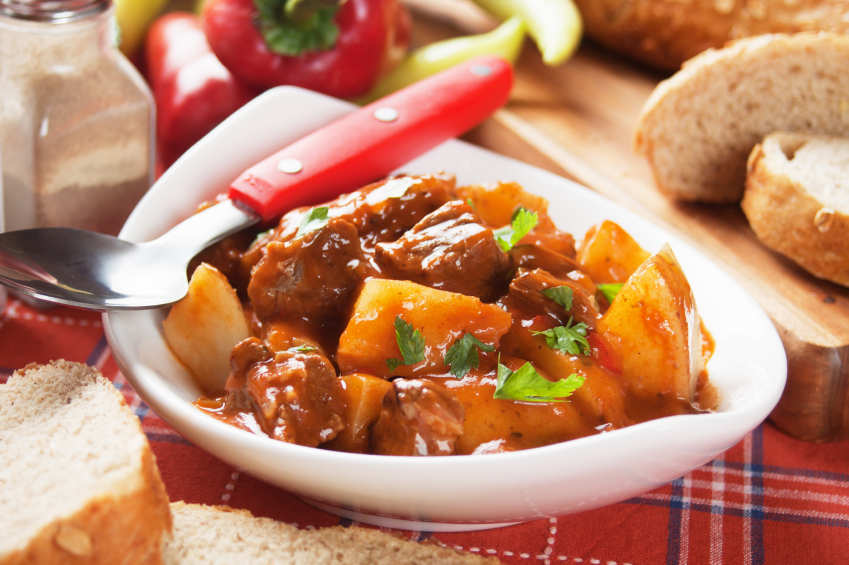 No soup lineup is complete without something seriously meaty. Giada De Laurentiis’s recipe, featured on Food Network, gives a decidedly fall feel to beef stew with the addition of butternut squash. A splash of Marsala adds extra depth, but you could substitute dry red wine or even a dark beer. This recipe only serves 4, so consider scaling up if you’ll be feeding a crowd.

Directions: In a large soup pot, heat 3 tablespoons oil over medium heat. Add onions, garlic, rosemary, and thyme. Cook until onions are tender, about 2 minutes. Add beef and continue to cook until beef is browned, about 5 minutes. Add Marsala, and use a wooden spoon to scrape up the brown bits from the bottom of the pan. Add squash and sun-dried tomatoes. Stir to combine. Add enough broth just to cover, and bring to a boil. Reduce heat to low and simmer, covered, for 1 hour. Season with salt and pepper. Sprinkle with parsley and serve with bread.