When was the last time you pulled out your cast iron skillet? These dark and heavy pans are great for adding flavor and texture to your dishes, but we don’t always reach for them first — especially when we’re making desserts. However, there’s all the reason in the world to try making your sweets in your skillet. Edges get crispy, crumbles get brown, and the centers stay gooey and soft. Plus, there’s normally minimal cleanup. Put your skillet to work as you try these delicious desserts. 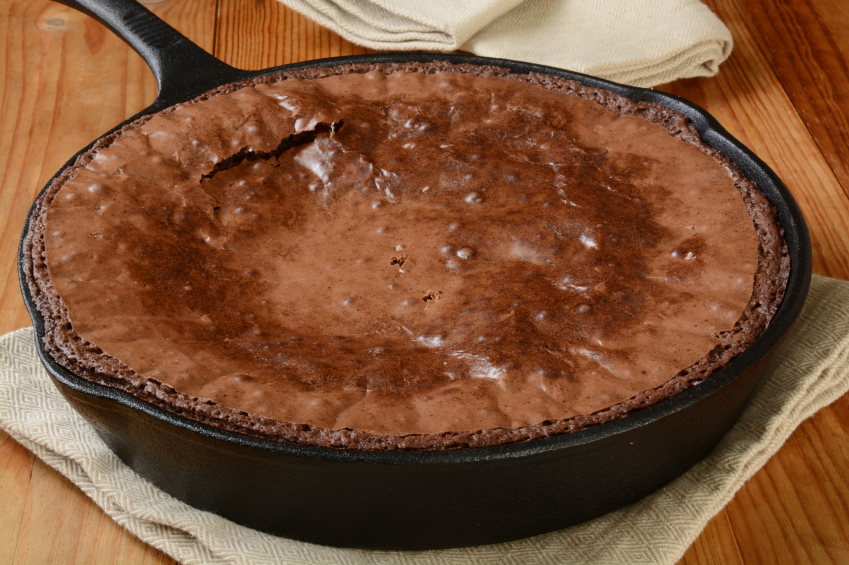 The only downside to making super gooey brownies is you usually have to wait a few hours for them to cool in order to cut them into squares. By baking the batter in a skillet, it’s pretty much understood that you’ll be scooping rather than cutting, so you can dig in right away. One of our favorite recipes for these molten brownies comes from Sally’s Baking Addiction. Because cast-iron pans retain heat so well, this goody will stay nice and warm as guests come and go.

Directions: Melt butter and chocolate in a medium saucepan over medium heat, stirring constantly, until almost melted. Remove from heat and continue to stir until smooth. Alternatively, melt in the microwave, cooking in 20 second intervals and stirring between each interval, until fully melted. Transfer to a large mixing bowl and cool for about 10 minutes.

Whisk the sugar into the melted chocolate, followed by the eggs and vanilla, mixing to thoroughly combine. Using a rubber spatula, fold in the flour, cocoa powder, and salt until just combined. Lastly, mix in the chocolate chips.

Pour batter into prepared skillet, transfer to oven, and bake 30 to 32 minutes, or until edges are dry and top looks shiny and cracked. Do not overbake. 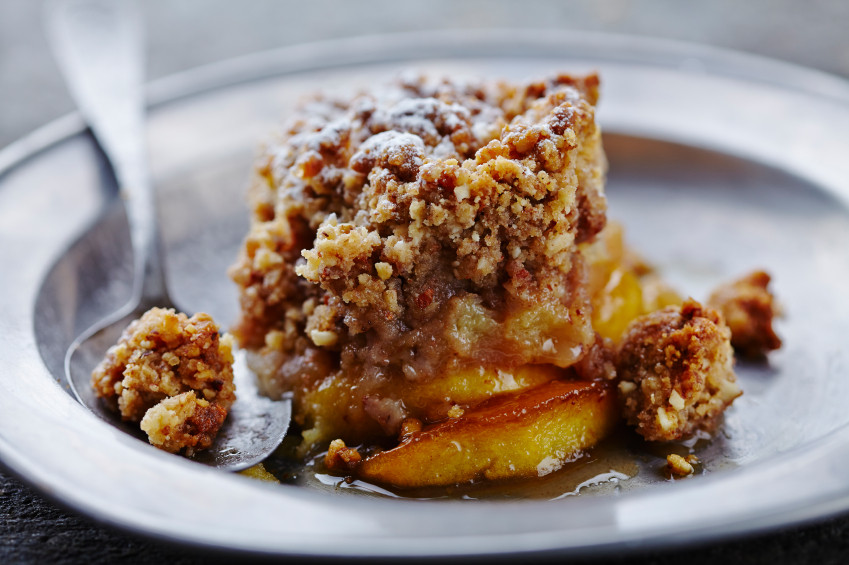 As much as everyone loves a slice of apple pie, it’s a tough dessert to pull off. For the same flavor and a lot less work, try a your hand at a crisp. Food Network’s apple dessert makes things even easier by using purchased granola to shortcut the topping. You can use any variety of cereal you like, but you might want to think about ingredients you like to pair with apples like cinnamon, pecans, and raisins.

Directions: Preheat oven to 350 degrees Fahrenheit. Meanwhile, melt butter in an oven-safe skillet over medium heat. Add granola, 1 tablespoon flour, and 1 tablespoon sugar. Toss until sugar is dissolved and granola is coated. Transfer topping to a bowl and set aside.

Pour apples into skillet and add pumpkin pie spice, lemon juice, and remaining sugar. Cook, stirring occasionally, until apples are juicy and slightly softened, 5 to 7 minutes. Stir in remaining flour. Scatter granola mixture over top and transfer skillet to oven. Bake until bubbling and apples are tender, about 35 to 40 minutes. Serve. 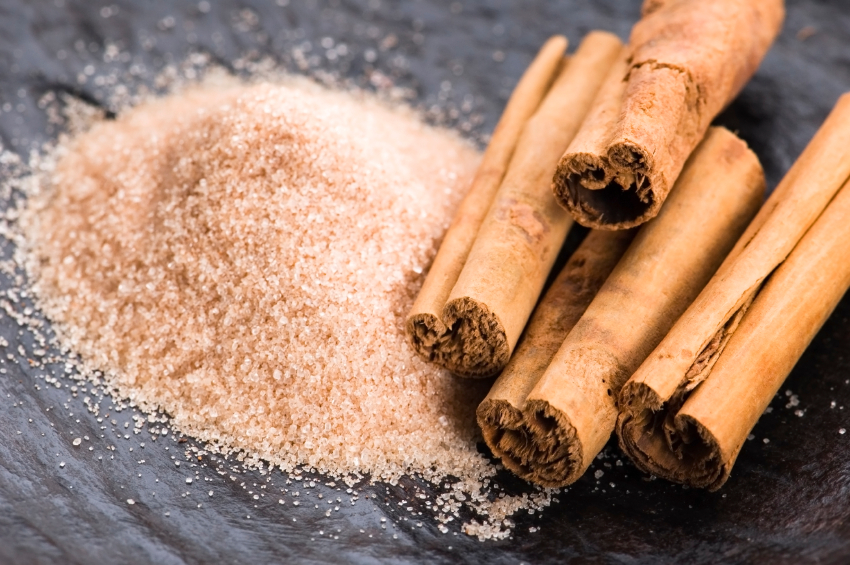 Making a skillet cookie is both more impressive looking and faster than baking individual treats, especially in the case of snickerdoodles. Instead of having to roll individual dough balls in cinnamon sugar, you just sprinkle it in the skillet and on top of the giant cookie. Give it a try with this cinnamon-spiced concoction from Foodie With Family. The baking time for this dessert can vary quite a bit, depending on your oven, so keep an eye on it after 25 minutes.

In the bowl of a stand mixer fitted with the paddle attachment, cream butter and sugar until light and fluffy. Add eggs and beat to combine. Add flour mixture and mix until combined. Chill dough for 30 minutes.

Bake cookie 30 to 45 minutes. Cookie is done when edges are browned and center is golden. Let cool for 20 minutes, slice into wedges, and serve. 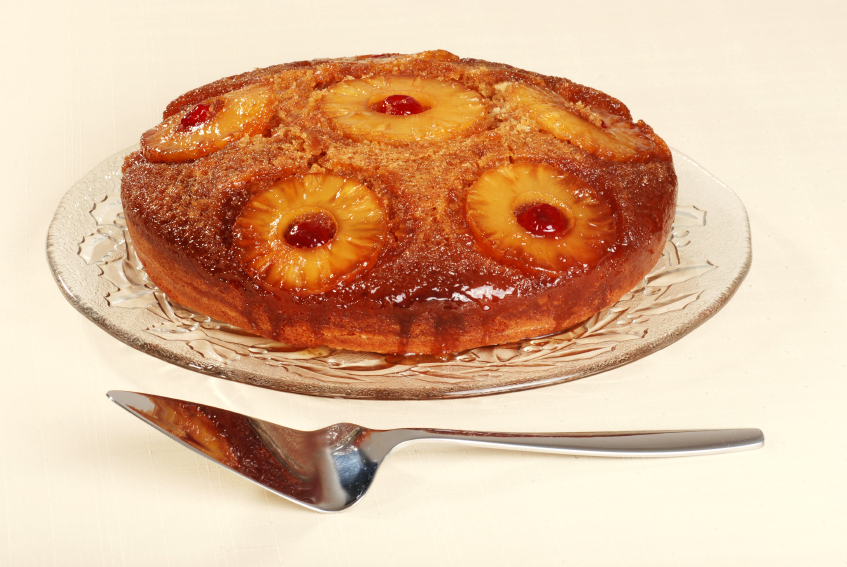 Perhaps the most obvious of all the skillet desserts out there, pineapple upside-down cake also happens to be one of the tastiest. Give this classic cake a go with Southern Living’s recipe. For a little more oomph, add a splash of whiskey to the brown sugar topping before adding the pineapple.

Bringing this cake to a party? Leave it in the skillet instead of inverting right away, so it’s easier to transport. When you arrive, heat the bottom of the skillet for a minute or two on a grill or stovetop. It will warm the caramel just enough to help the cake easily release from the pan when you flip it out.

Directions: Preheat oven to 325 degrees Fahrenheit. Melt butter in a 9-inch cast-iron skillet. Evenly spread brown sugar over the skillet. Drain pineapple reserving ¼ cup of the juice. Arrange pineapple rings over the brown sugar, making sure to leave in a single layer. Place a cherry in the center of each ring.

Beat egg whites until stiff peaks form, then carefully fold into batter. Spoon batter over pineapple slices in skillet. Bake 45 to 50 minutes, or until a toothpick inserted into the center of the cake comes out with a few moist crumbs attached. Cool cake in skillet for 30 minutes, then invert onto a plate. Serve. 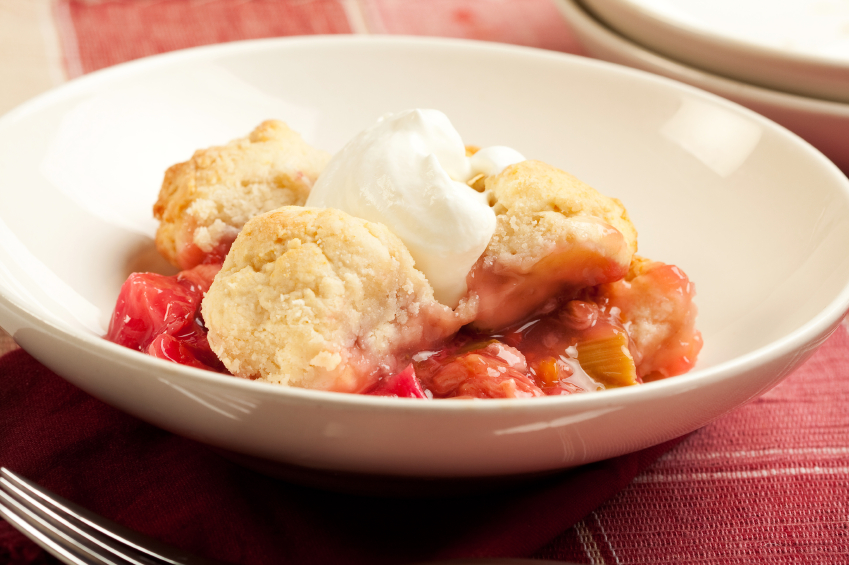 There’s no need to wait until spring to get your fill of strawberry desserts when you make Half Baked Harvest’s skillet fruit cobbler because it works perfectly well with frozen berries. We particularly like the biscuit topping for this recipe; it gets a hefty dose of cream cheese for added richness. When buying frozen strawberries, make sure you’re getting ones without added sugar, otherwise you’ll end up with a filling that’s mores syrup than fruit.

Directions: Preheat oven to 375 degrees Fahrenheit. Lightly grease an 11- to 12-inch cast-iron skillet with butter or cooking spray. Combine strawberries, sugar, lemon juice, vanilla extract, vanilla seeds, and a pinch of salt in the bottom of the skillet. Toss to combine.

Whisk flour and baking powder in a large bowl. Using a pastry cutter or a fork, cut butter into flour until you’re left with coarse crumbs, some about the size of peas. Whisk honey into buttermilk, then add to flour. Stir until just combined, being careful not to overmix, using your hands to gently knead at the end. Carefully fold in the cream cheese.

Transfer cobbler to oven and bake 40 to 45 minutes, or until filling is bubbling and biscuits are golden. Serve. 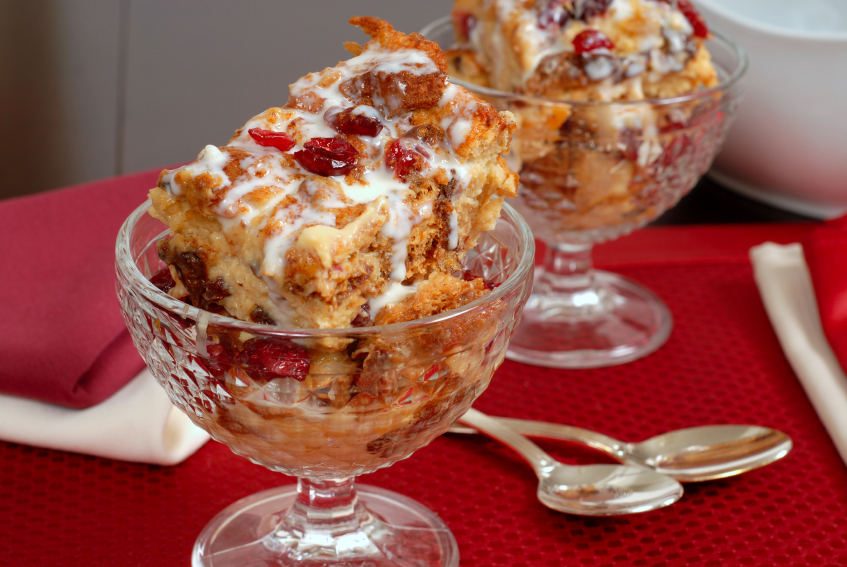 Bread pudding made with a basic white loaf is pretty tasty. Bread pudding made with croissants in unbelievable. See what you’ve been missing by baking Pampered Chef’s dessert with oranges and cranberries. The best part is probably the crispy topping, made by sprinkling some sugar over the top, then broiling the dish. It adds just enough crunch to an otherwise soft dessert.

Directions: Preheat oven to 425 degrees Fahrenheit and position rack in the center. Cut one orange into segments, then cut segments in half. Set aside. Zest remaining orange to get 1 teaspoon and juice to measure ¼ cup juice. Combine orange juice, water, and cranberries in a 10-inch skillet. Bring mixture to a boil and simmer for 2 minutes, or until cranberries are softened.

Whisk eggs and orange zest to combine in a medium bowl. Combine half-and-half and condensed milk in a microwave-safe bowl and heat for 3 to 4 minutes on high, or until hot. Slowly add milk mixture to eggs, whisking to combine. Pour custard over croissants in skillet, pressing to coat.

Sprinkle sugar evenly over the top. Bake bread pudding 14 to 16 minutes, or until an instant-read thermometer registers 155 degrees Fahrenheit when inserted in the center. Switch oven to broil and cook 3 to 4 minutes, or until top of pudding is golden. Serve. 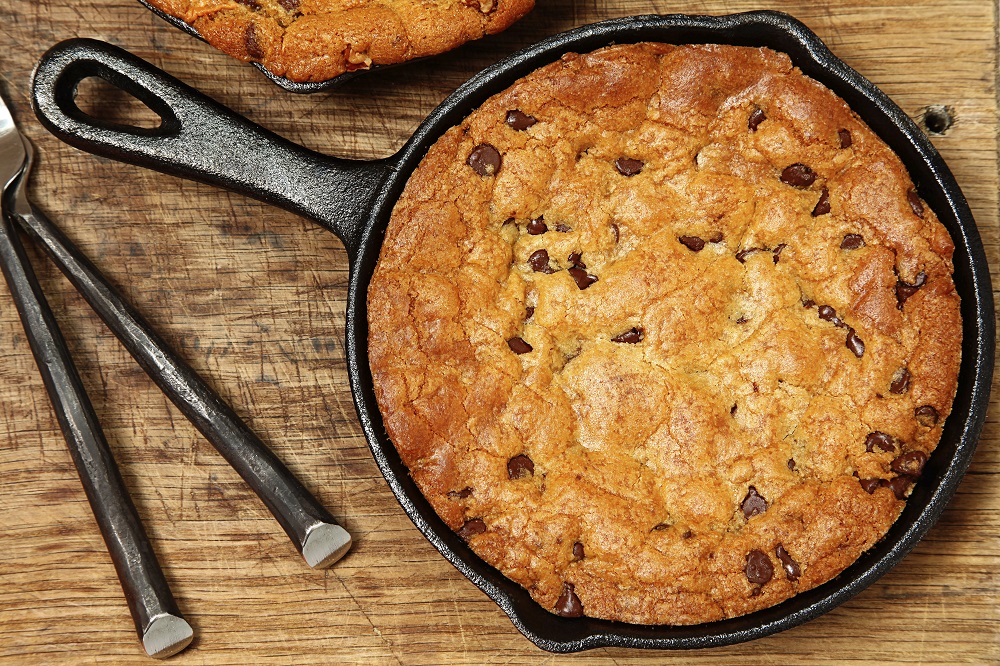 Like the perfect combination of all your favorite cookies, this massive skillet cookie from Creme de la Crumb is a must-make dessert. It’s also a good choice for those new to baking because it’s a lot harder to overbake this monster than individual treats. Though completely unnecessary, vanilla ice cream makes a fantastic addition.

Whisk flour, baking soda, salt, and oats in a medium bowl to combine. Using a stand or hand mixer, cream butter with both sugars until pale and fluffy. Add peanut butter, egg, and vanilla. Mix to combine. Add dry ingredients and mix just to combine. Fold in chocolate chips.

Using your fingers, press dough into prepared skillet, leaving ½-inch border around the edge of the skillet. Transfer to oven and bake 25 to 35 minutes. Serve warm cookie with ice cream.