Gerrymandering: Only Voters Can Fix It Thanks to the Supreme Court

The Supreme Court decided not to rule on gerrymandering on June 19, sending two redistricting cases back down to lower courts. That court sent Gill v. Whitford, a Wisconsin case, back for litigation on a district-by-district, rather than statewide, basis, Slate reports. Justices also considered preliminary relief improper in Benisek v. Lamone, a Maryland case. Gerrymandering gets complicated, so let’s break down how it works. 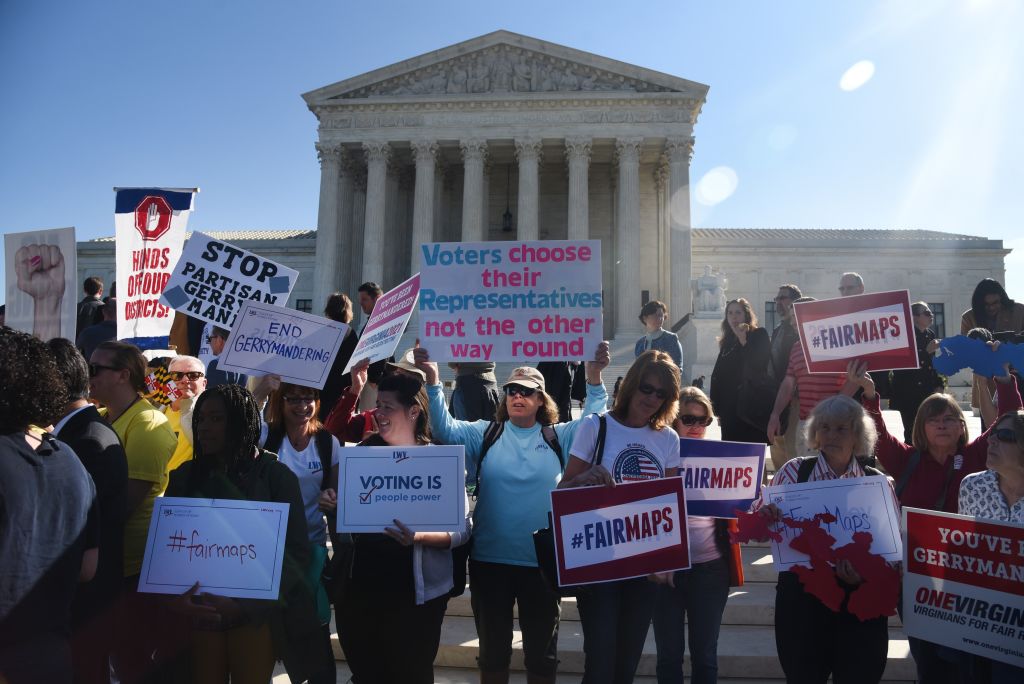 Gerrymandering refers to drawing an election map along lines that favor one party over another. In 2004, the Supreme Court disagreed on whether to refuse a legislative map organized that way, according to Slate.

At that time, Justice Anthony Kennedy declared that courts might have some say. Partisan gerrymandering threatens voters’ First Amendment rights, in that it impacts how their vote “counts.” However, Kennedy also decided that the courts would need reliable, manageable, and consistent “judicial standards” to determine what constitutes that infringement.

What happened in these cases?

As The Daily Beast explains, The plaintiffs in Gill v. Whitford figured out that the map tilts 60% vs 47%. However, individual politicians draw cross-party votes, too. In order to refute the impact of that, the Gill team cited a new statistic called the “efficiency gap.”

As its creator explains it in The New Republic, the efficiency gap measures “the difference between the parties’ respective wasted votes in an election, divided by the total number of votes cast.” A large efficiency gap, in turn, shows a more damaging gerrymander. Put simply, an efficiency gap of 7% or larger can mean the majority party also retains power indefinitely. That obviously disenfranchises voters from the minority party.

Why did the courts decide not to decide?

As Roberts put it, “[This] is a case about group political interests, not individual legal rights. But this court is not responsible for vindicating generalized partisan preferences. The court’s constitutionally prescribed role is to vindicate the individual rights of the people appearing before it.”

In Gill, the group of voters who sued Wisconsin Republicans did not satisfactorily prove that gerrymandering impacted their specific rights. Instead, Chief Justice Roberts wrote in his majority opinion, they “rested their case” on a “theory of statewide injury to Wisconsin Democrats.” This statewide injury, Roberts explained, didn’t give the plaintiffs enough standing for a suit.

Other courts have disagreed

Even though Roberts didn’t agree with the efficiency gap argument, other statistical standards and technologies can show the same thing. A Washington Post op-ed explained that those new standards have affected other maps. In Pennsylvania, they persuaded the state Supreme Court to overturn its congressional map as a partisan gerrymander. A federal judge panel in North Carolina also came to a similar conclusion.

This fall, as many as seven states plan to vote on ballot initiatives to instate independent redistricting commissions. Already, Arizona and California use independent bodies for line-drawing. Their maps rely on nonpartisan standards, instead. Maine has also enacted ranked choice voting. That revolutionary system allows a voter to choose a number of candidates, ranked by their most-favored to least-favored choice.

Why does this matter?

Citizen groups have stepped up and spoken out, to get the gerrymandered districts changed. More and more, state election interest has grown. That comes on the heels of President Donald Trump’s historic upset, and a number of other deeply contentious races since.

“What we have seen in the special elections is a significant spike in the interest, engagement, spending and energy by the liberal Democrats and progressive movement,” Matt Walter told The New York Times. The president of the Republican State Leadership Committee said voter energy appears higher than ever. “The spending is real. The organizational prowess is real. And the energy is real.”

Gerrymandered legislatures nationwide have a real effect on the districts they oversee. Most recently, they have advocated for voter ID bills, impacted voting rolls, and even limited early voting. In closely divided states like New Hampshire and North Dakota, that reach goes even deeper. Where U.S. Senate races can swing by just a few hundred votes, Republican lawmakers have passed voter restrictions. Those can, in turn, make it harder for Democratic populations to cast ballots.

It all comes down to measuring the impact

The issue in these two most recent Supreme Court cases comes down to jurisdiction. As The Daily Beast explains, the justices essentially punted the cases to lower courts for a lack of just that. The Chief Justice’s opinion said that “the opinion of the court rests on the understanding that we lack jurisdiction to decide this case, much less to draw speculative and advisory conclusions regarding others. The reasoning of this court with respect to the disposition of this case is set forth in this opinion and none other.”

In other words, lower courts will now have to decide how much gerrymandering constitutes injury to individual voters. Pretty much everyone — on both sides of the aisle — agrees that too much partisan gerrymandering registers as unconstitutional. But right now, no one knows exactly where to draw the line.