In most households, green bean casserole makes an appearance exactly twice a year, at Thanksgiving and at Christmas. Love it or hate it, this dish — traditionally made with a mix of milk, condensed cream of mushroom soup, and canned green beans, then topped with crunchy French-fried onions — has earned a permanent spot on holiday dinner tables around the country. Thirty million families serve green bean casserole on Thanksgiving and the ultra-simple recipe generates 70% of the traffic on Campbell’s website, according to NPR. (The original recipe was developed by the home economist working for the soup company in 1955.)

Still, many turn up their nose at conventional green bean casserole, rejecting the mix of canned and processed food that most recipes call for. But making a green bean casserole can involve more than just opening a few tins of soup, and it can even be a dish you look forward to during the holidays. If you’re skeptical about green bean casserole, one of these six recipes may help change your mind about the much-maligned dish.

1. Not Your Mama’s Green Bean Casserole 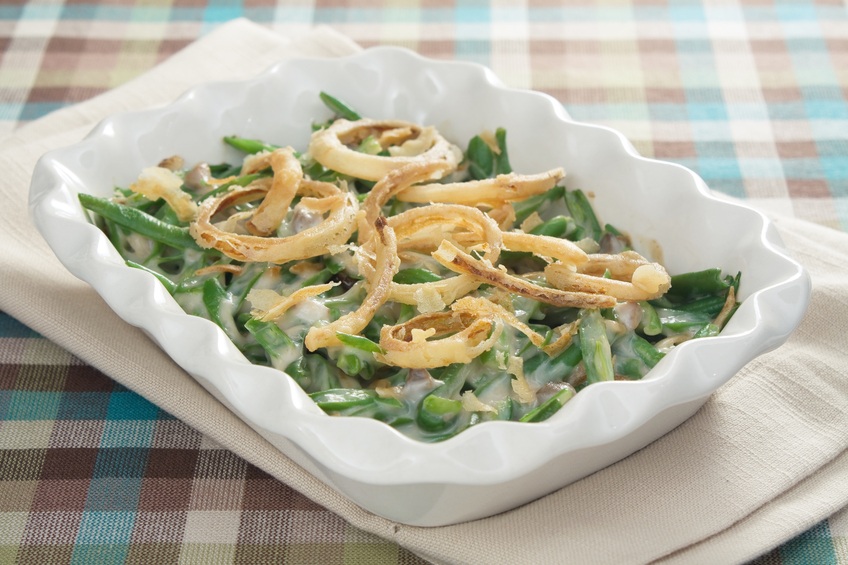 You can count on the Food Network’s Alton Brown to take green bean casserole from “blah” to “wow.” His recipe for the dish calls for a homemade crunchy onion topping, fresh green beans rather than canned, and a from-scratch mushroom sauce. The final dish isn’t much different from the original in concept, so it should please traditionalists, but it’s also tasty enough to win over even the most skeptical diners.

Combine the onions, flour, panko, and salt in a large mixing bowl and toss to combine. Coat a sheet pan with nonstick spray and evenly spread the onions on the pan. Bake in the oven until golden brown, tossing every 10 minutes, for approximately 30 minutes. Once done, remove from the oven and set aside until ready to use.

Turn the oven down to 400 degrees Fahrenheit.

While the onions are cooking, prepare the beans. Bring a gallon of water and 2 tablespoons of salt to a boil in an 8-quart saucepan. Blanch for 5 minutes. Drain in a colander and immediately plunge the beans into a large bowl of ice water to stop the cooking. Drain and set aside.

Melt the butter in a 12-inch cast iron skillet set over medium-high heat. Add the mushrooms, salt, and pepper and cook, stirring occasionally, until the mushrooms begin to give up some of their liquid, approximately 4 to 5 minutes. Add the garlic and nutmeg and continue to cook for another 1 to 2 minutes. Sprinkle the flour over the mixture and stir to combine. Cook for 1 minute. Add the broth and simmer for 1 minute. Add the half-and-half and cook until the mixture thickens, approximately 6 to 8 minutes.

Remove from the heat and stir in ¼ of the onions and all of the green beans. Top with the remaining onions. Place into the oven and bake until bubbly, approximately 15 minutes. Remove and serve immediately. 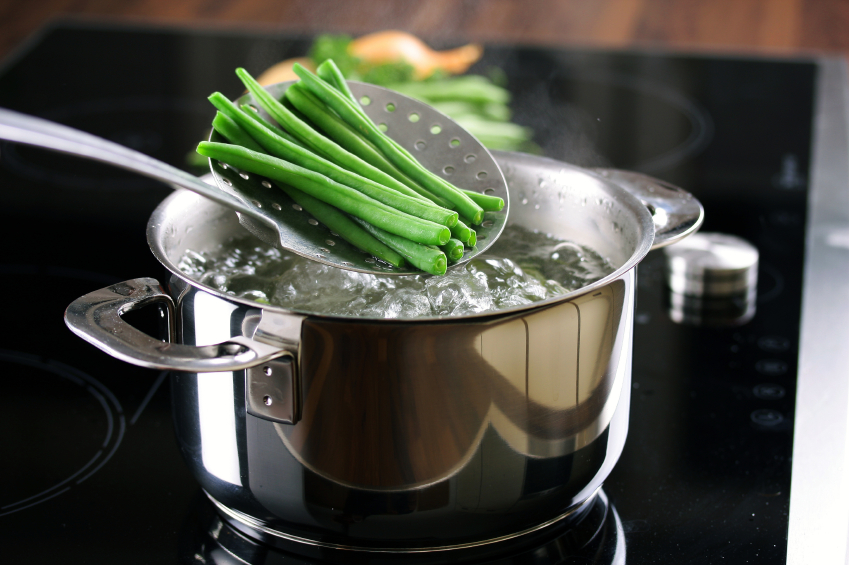 The Pioneer Woman takes the traditional green bean casserole to the next level with the addition of bacon, pimentos, and sharp cheddar cheese. The result is a creamy, cheesy dish you’re going to want to eat all year round.

Lightly salt a large pot filled with water. Bring to a boil, then drop the green beans into the pot. Cook for 3 to 4 minutes. As the beans cook, fill a bowl with ice water. Use a slotted spoon to remove beans from the pot and transfer to the bowl of cold water to stop the cooking process. Let beans cool, drain, then set aside.

Cook the bacon for 2 minutes in a heavy-duty skillet over medium heat. Add the diced onion and garlic and cook for 3 to 5 minutes more, until the bacon is fully cooked but not crisp and the onions are golden in color. Remove from heat and set aside.

Melt the butter in a saucepan over medium heat. Add the flour to the pan and quickly whisk to combine with the butter. Cook for 1 or 2 minutes, then add the milk and half-and-half. Continue to cook, whisking constantly, until the sauce thickens, about 2 minutes. Add the salt, pepper, and cayenne and whisk to combine, then stir in the grated cheddar cheese. If the sauce seems too thick, add a little chicken broth to thin it out.

Remove the sauce from heat and add the pimentos, then stir in the bacon and onions. Pour the sauce over the green beans and stir to combine. Pour green bean mixture into a large baking dish. Sprinkle panko breadcrumbs over top.

Bake for 30 minutes, until sauce is bubbly and panko crumbs are golden. Remove from oven, let cool slightly, then serve. 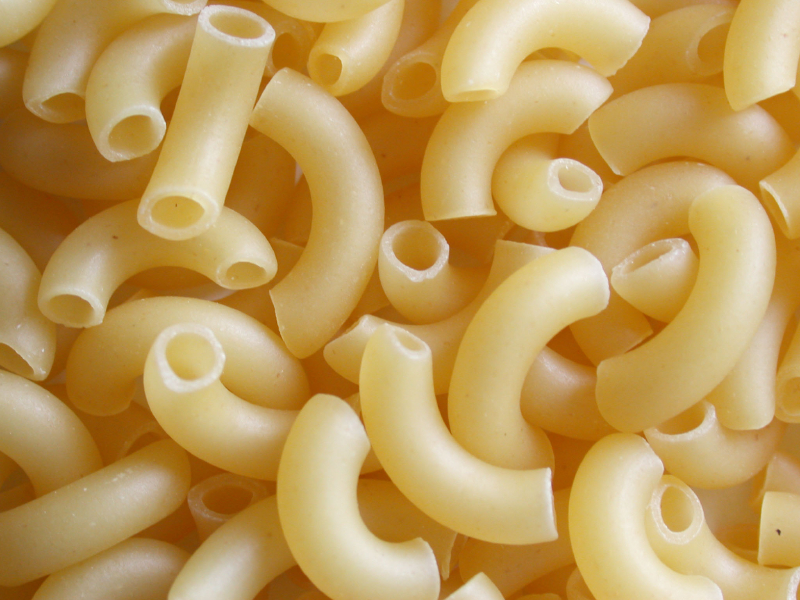 Two classic comfort foods — green been casserole and mac and cheese — come together in one delicious dish in this recipe from BBC Good Food. You can serve this cheesy dish with an arugula salad or pair it with fried chicken or another meat for a complete meal. If you can’t find the runner beans this recipes calls for, substitute regular green beans.

Directions: Put the oil in a medium saucepan over a medium heat, add the flour, and stir well. Still stirring, slowly pour in a little of the milk and mix well until smooth. Add a little more milk, repeating until all the milk has been added and you have a smooth sauce. Stir in the nutmeg, season, then take off the heat while you cook the pasta.

Heat oven to 425 degrees Fahrenheit. Bring a large pan of water to the boil, add the macaroni and boil for 8 minutes. Add the runner beans and green beans, and boil for a further 3 minutes.

Drain the pasta and the beans, and tip into a large gratin dish. Pour over the prepared sauce and tuck the chopped cheese in among the pasta, then top with the grated cheese and pumpkin seeds. Bake for 10 to 15 minutes or until the top is bubbling and golden. 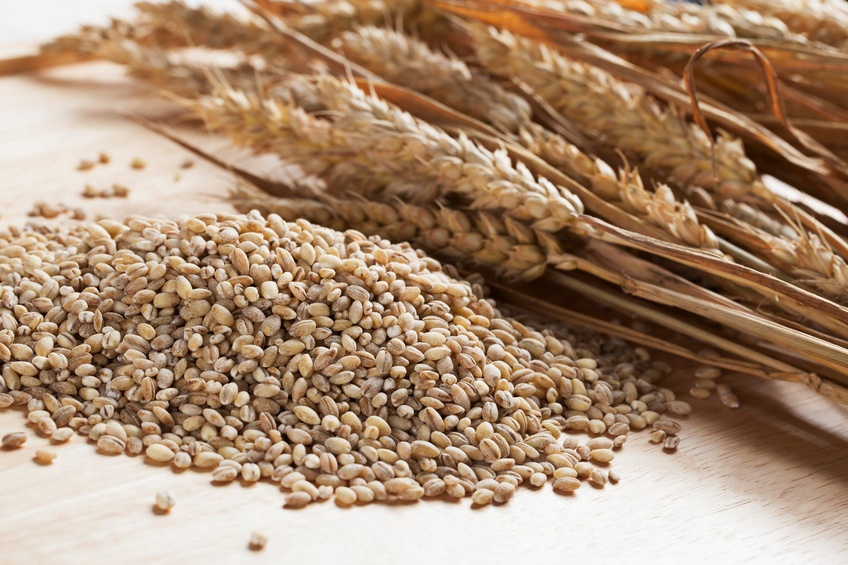 This creative take on green bean casserole bears just the faintest resemblance to the mushy version so many people are familiar with. There are fresh green beans in this dish, of course, but you’ll also find pearled barley and chicken. A velvety sauce is made with white wine and cream cheese, and it’s all topped with crumbled cheese crackers. Recipe from Country Living.

Whisk in cream cheese, one piece at a time, then Parmesan, until smooth. Season with ¼ teaspoon salt and ½ teaspoon pepper. Stir in chicken, barley, green beans, and parsley. Transfer mixture to the prepared pan.

Melt the remaining tablespoon butter in a microwave-safe bowl. Add cheese crackers and stir to coat; sprinkle over casserole. Bake until golden and bubbly, 25 to 30 minutes. Let stand 10 minutes before serving. 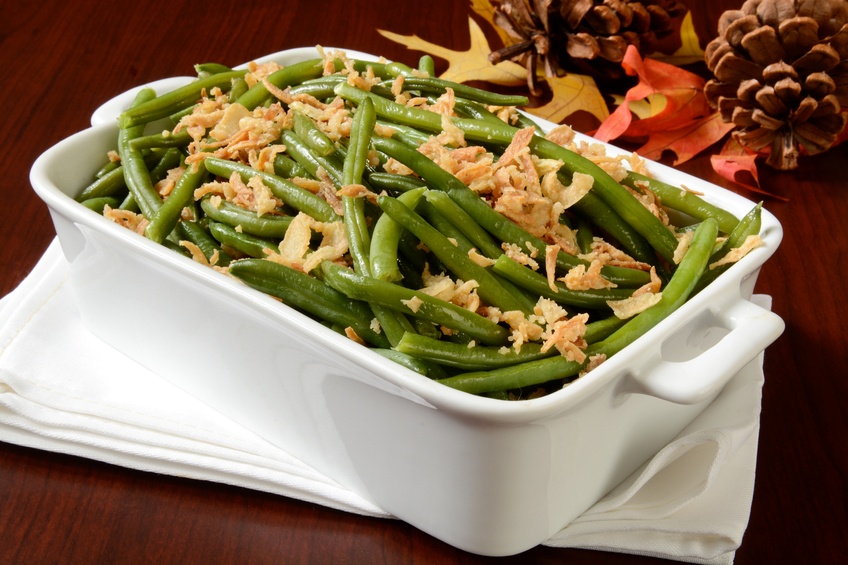 Indulgent green bean casserole is transformed into a light and healthy dish in this recipe from Oh My Veggies. Prepping this dish takes about 40 minutes, quite a bit longer than it takes to assemble the traditional casserole, but we think you’ll find the results well worth the extra effort.

For the onion topping

Directions: To make the fried onion topping, combine the soy milk and vinegar in the medium bowl. Add the onion rings, submerging as many as possible. Let soak for at least 30 minutes.

Combine the flour, salt, pepper, and cayenne pepper in a medium bowl or zip-top bag. Drain the onions, then transfer to the bag or bowl full of the flour mixture and toss to coat.

Add ¼ cup of oil to a large skillet and turn heat to medium-high. When the oil starts to shimmer, add the onions in a single, even layer. Cook for 2 minutes, then toss gently once or twice with a spatula. Cook for 2 minutes more, then flip again. Once the onions have started to turn brown and crispy, remove from pan and transfer to a plate lined with paper towels to drain. Repeat with any remaining onions, adding more oil to the skillet if needed.

Add the flour to the skillet and stir until a paste forms. Slowly pour in the soy milk, stirring constantly as you do so. Add the soy sauce, pepper, and green beans. Bring mixture to a simmer and reduce heat to medium-low. Cook until the sauce has thickened and the beans are bright great in color, about 10 minutes.

As the beans cook, preheat the oven to 350 degrees Fahrenheit. Pour the beans and sauce into a 9-inch baking dish (if you’re cooking in a cast-iron skillet, you can transfer the dish directly to the oven). Cook for 20 minutes, until the warmed through and bubbly. Remove from oven, top with the fried onions, then serve. 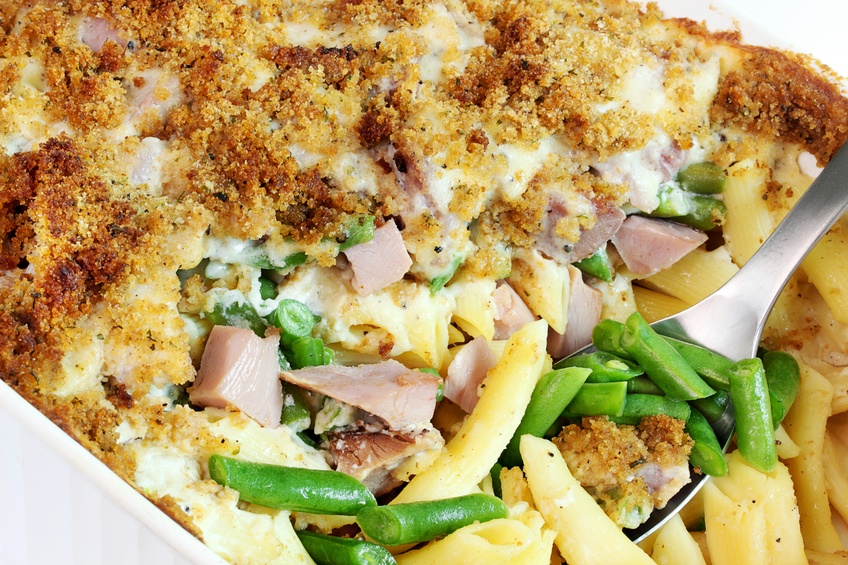 A tasty, cheesy casserole is the perfect way to use up leftovers like cooked ham or extra baked or boiled potatoes. This recipe from Thrifty Frugal Mom calls for both, as well as fresh green beans and a homemade cheese sauce. The result is a simple, filling dish that’s ideal for weeknight dinners.

Add the butter to a saucepan and turn heat to medium. Once the butter has melted, whisk in the flour, salt, pepper, onion powder, and garlic powder. Pour in the milk, stirring constantly until the mixture thickens. Remove pan from heat, stir in the cheese, and set aside.

Grease a 9-by-13-inch baking dish. Add potatoes to the dish, then top with the green beans and the ham. Pour the cheese sauce over. Combine the breadcrumbs with 2 tablespoons of melted butter. Sprinkle over the top of the casserole.