Once the appetizers, main dishes, and sides have been devoured at a cookout, sweets are usually some cookies a guest brought. No offense to those chocolate-studded goodies, but a great barbecue deserves a dessert that’s just as impressive as the pulled pork. Since the grill is already hot, you might as well use it to whip up a grilled dessert for you and your friends. We’ve found seven recipes that will earn you a standing ovation and they don’t require any special pastry skills. With a handful of great ingredients and a tiny bit of effort, dessert might be the highlight of your grilled feast. 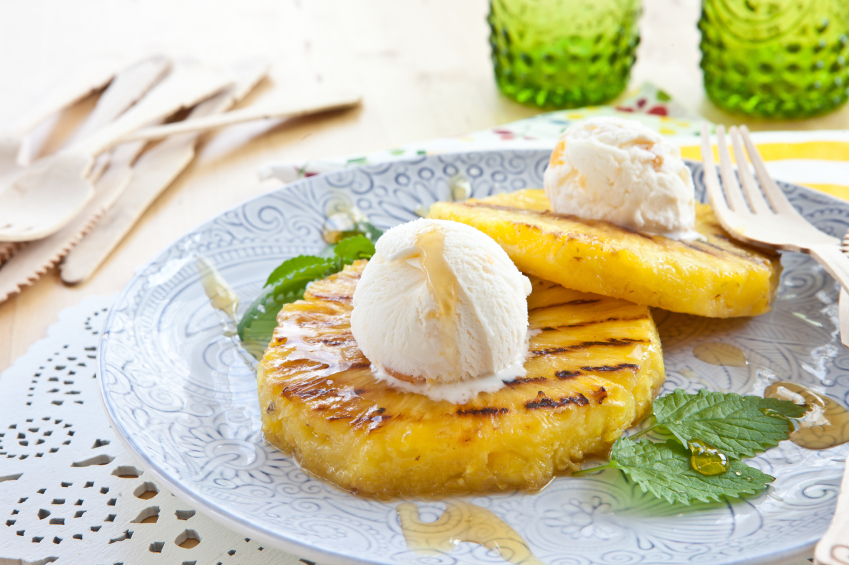 Grilling pineapple used to seem crazy, but now it’s almost more likely to show up on menus after a quick sizzle over a flame than it is raw. Taste why this grilled dessert is still one of the most popular ways to enjoy the flavorful fruit with this rum-spiked sundae from Serious Eats. The flavors of rum, pineapple, and coconut make this dessert taste like an island retreat. Sprinkle a little bit of lime zest on top to boost the tropical taste even more.

Directions: Preheat oven to 350 degrees Fahrenheit. Spread coconut in a single layer on a baking sheet and place in oven. Toast until coconut browns, about 10 to 15 minutes, stirring every 5 minutes to ensure even cooking. Remove to a small bowl, and set aside.

Add brown sugar, rum, butter, and vanilla to a small saucepan. Cook over grill until butter melts and sugar dissolves. Remove from heat. Brush pineapple slices with glaze, then grill, brushing and turning, until browned and lightly charred. Remove from heat.

Place three slices of pineapple on each plate, top with a scoop of ice cream, and sprinkle with toasted coconut. Serve. 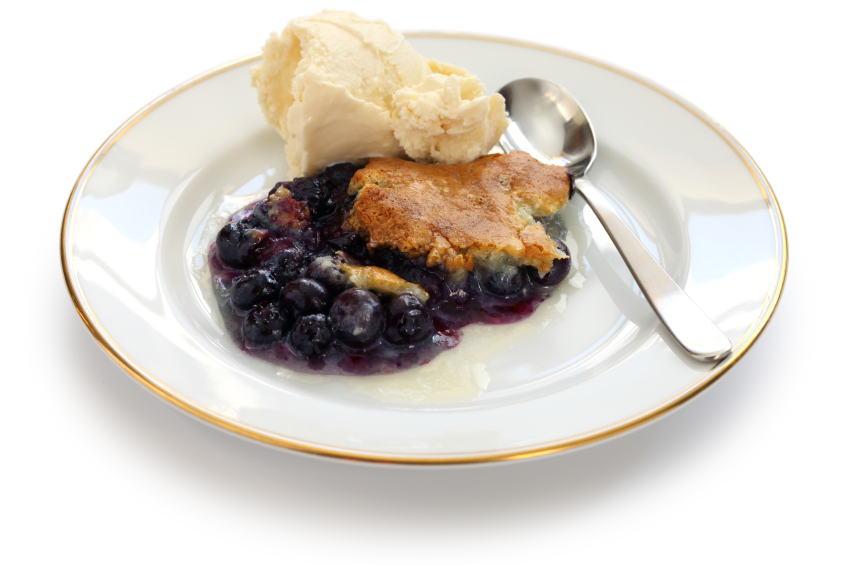 Making a grilled dessert can be low maintenance if you opt for turning the outdoor cooking equipment into an oven. Give it a try with Martha Stewart Living’s berry dessert. Just bring the fruit to a bubble with a bit of water and sugar right over the grates. Stir together an easy biscuit dough, dollop it over the top, and sprinkle with cinnamon sugar.  Close the lid, let the grunt cook for 20 minutes, then behold your dessert masterpiece.

This simple recipe tastes great the way it is, but the possibilities for variations are endless. Try cardamom instead of cinnamon for a different twist on the topping. You can also add tons of other flavors to the berries. Citrus zest, a splash of booze, and vanilla bean are all great choices.

Directions: Cook berries with ¼ cup sugar, water, and lemon juice in a cast-iron skillet set over medium grill until thickened, 10 to 15 minutes.

Cover skillet with parchment-lined foil. Cook on grill until dumplings are set and tops are dry, about 20 minutes. 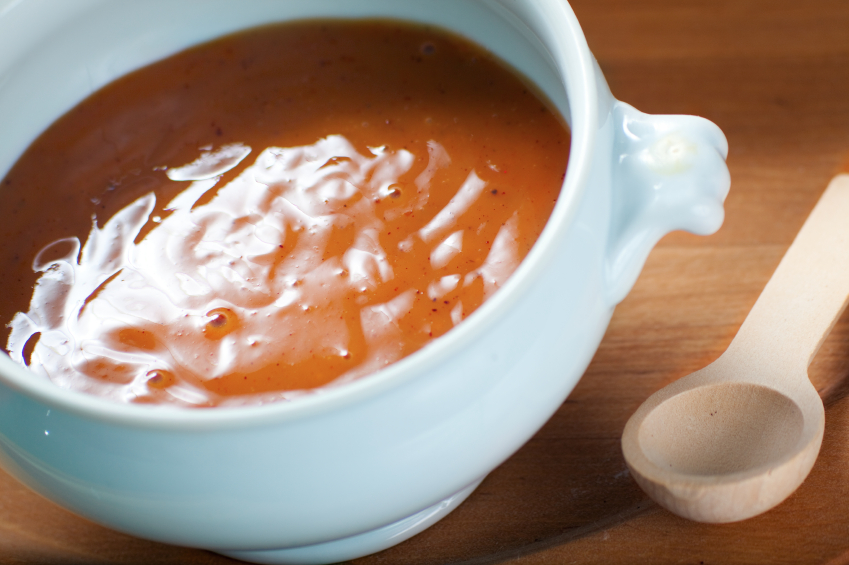 If you love dulce de leche, it’s time to upgrade to cajeta. This milk-caramel concoction is made the same way, but uses goat’s milk instead of cow’s milk to produce a confection that tastes more complex. It’s used in tons of Mexican desserts, but it’s not quite as common in the U.S. That may change once folks get a taste of Bobby Flay’s grilled pizza with cajeta and peaches, which he shared with Food Network. It’s as good as any pie, but much simpler.

You can make your own cajeta if you’d like a challenge, but jarred versions are available in most Latin supermarkets. Can’t find it? Dulche de leche is a fine substitute.

Directions: Melt butter and sugar in a small pot over a grill heated to medium. Add peaches  and stir to combine. Remove peaches and slice each half into quarters. Arrange peaches over cooked crust and drizzle with cajeta. Dollop with crème fraîche. Sprinkle with slivered almonds, cinnamon sugar, and torn mint leaves. Serve. 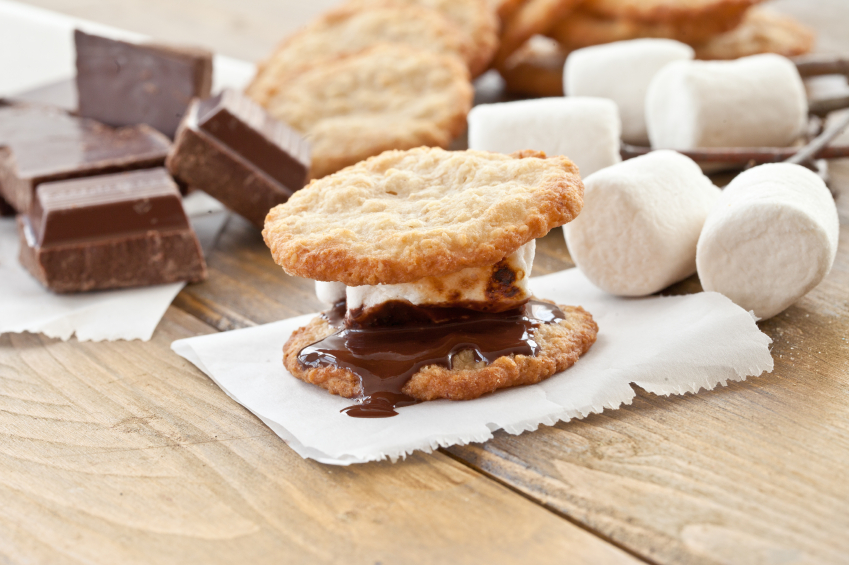 Dessert doesn’t have to be fancy to make an impression. Make Cat Cora’s peanut butter and cookie s’mores, featured on Today, for a dessert your guests will never forget. Graham crackers get replaced by some crispy chocolate chip cookies while a smear of peanut butter makes an unexpected, but delicious, appearance. This camp classic just got an upgrade.

Directions: Preheat grill to medium. Spread 1 tablespoon peanut butter on one side of four cookies. Top remaining cookies with once piece of chocolate and one marshmallow. Sandwich with peanut butter-covered cookies. Wrap each s’more in a piece of aluminum foil, and seal closed. Set on grill over indirect flame for 4 to 5 minutes or until chocolate and marshmallows melt. Open, and serve and once. 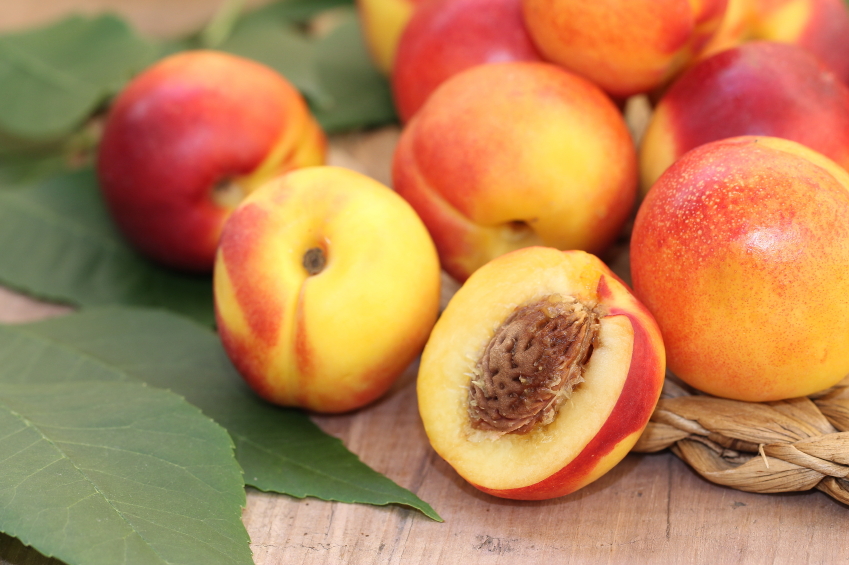 Nectarines on a cutting board | iStock.com

A basic nectarine crumble isn’t particularly difficult, but peeling and slicing all the fruit takes a little bit of time. Chowhound’s clever recipe makes the dessert faster and more fun for entertaining by using skin-on nectarines as individual dishes for the buttery topping. Start the fruit cut-side down, flip, top with a basic crumble mixture, then let the nectarines finish cooking. A dollop of sweetened mascarpone makes this dessert truly special.

Place pecans, brown sugar, butter, and cinnamon in a medium bowl. Mix with fingers, pinching, until moist and crumbly. Set aside. Whisk honey, brandy, and vanilla to combine in a small bowl. Set aside.

Brush both sides of nectarines with honey mixture, making sure to use all. Place cut-side down on grill. Cover and cook until marks appear, about 2 to 3 minutes. Flip, and evenly divide pecan mixture among nectarine halves. Cover, and cook until grill marks appear on second side and fruit softens, 3 to 4 minutes longer.

Remove from grill, and serve topped with mascarpone mixture. 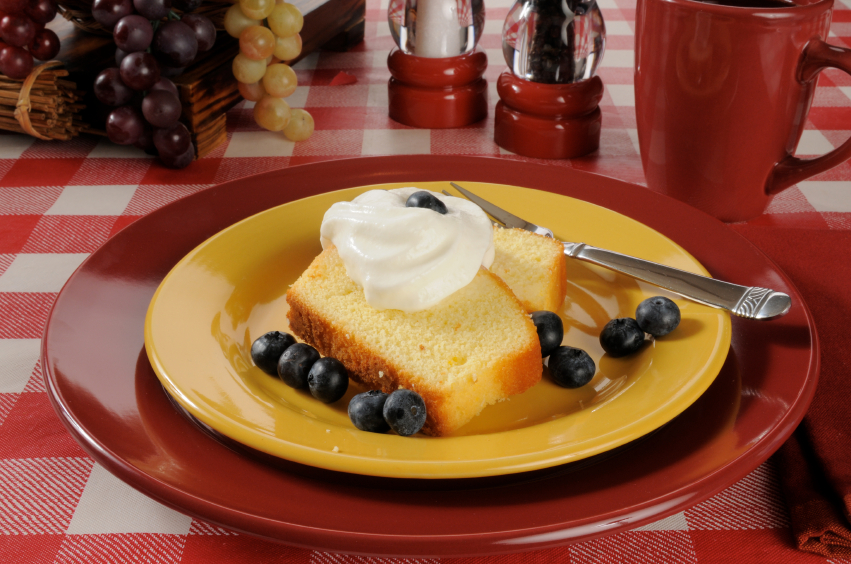 Take pound cake from fine to fantastic with Taste of Home’s grilled version topped with berries and whipped cream.  You don’t even need to turn on your oven for this dessert, because you can buy pre-baked pound cake at the store. Many bakery sections have fresh loaves available nearly every day, but you can also find it in the freezer aisle. Just be sure to let it thaw before you proceed.

Directions: In a large bowl, combine berries, 2 tablespoons sugar, and mint. Set aside.

In a small bowl, beat cream until it begins to thicken. Add remaining sugar, lemon juice, and lemon zest. Beat until cream holds soft peaks. Refrigerate until ready to use.

Preheat grill to medium heat. Spread butter over both sides of cakes slices. Grill, uncovered, over indirect heat 1 to 2 minutes per side, or until lightly golden. Serve cake with berries and whipped cream. 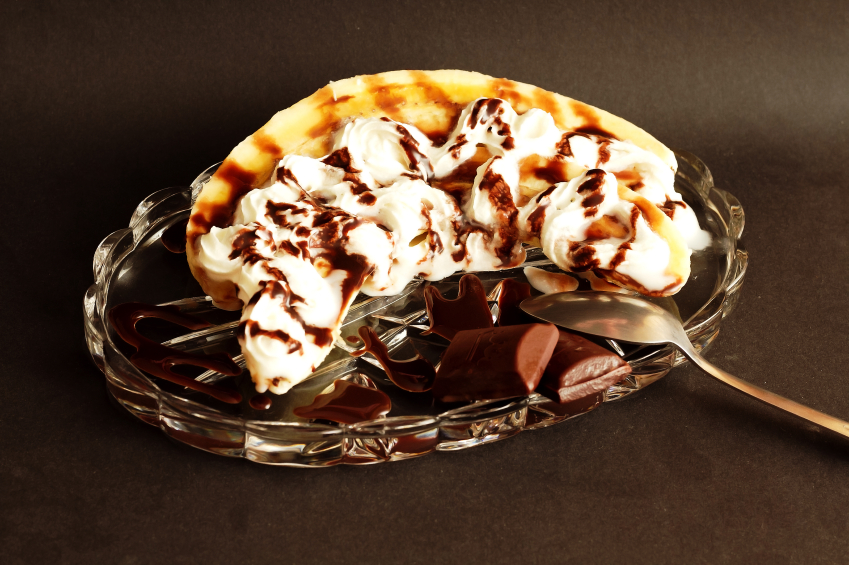 Grilled bananas glazed with rum, coffee ice cream, and a rich mocha sauce give new life to a classic banana split. Though Johnny Iuzzini’s recipe, featured on Food & Wine, sounds complicated, the method is simple. It does require some planning, though, as the bananas need to soak in the rum mixture for several hours. To make this recipe even easier, skip the sauce, and stir a bit of leftover coffee into some jarred hot fudge.

Meanwhile, whisk 1 cup water, granulated sugar, cocoa powder, and espresso powder in a medium saucepan. Bring to a boil, then whisk in cream and simmer over low heat, stirring occasionally, until thickened, about 40 minutes. Stir in the chocolate until melted. Remove from heat.

Light a grill. Drain bananas, and pat dry. Cut each banana in half lengthwise, and dip each in turbinado sugar. Grill over high heat until deeply caramelized, about 1 minute per side.