If you pour grease down the drain, flush wet wipes or feminine products, or generally abuse your sewer system, think again. The grossest thing you’ve ever seen came about as the result of these kinds of bad habits. And lucky you — it’s now on display at the Museum of London. If you like to gross yourself out, take a trip. But bring a puke bag, because it’s really something else.

The Beast does not mean what you think 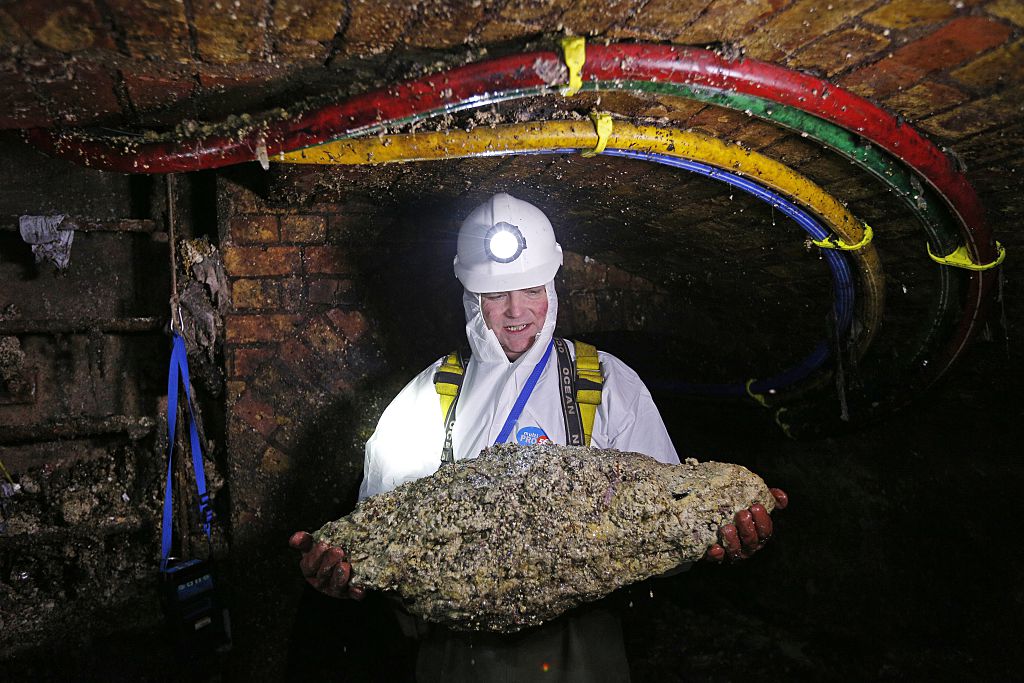 When you hear the term “the Beast,” you might think of a wild animal or a serial killer. But in London’s Whitechapel district, officials bestowed the name on a giant mass of congealed grease, flushed wet wipes, condoms, and other general grossness. According to The Guardian, the “fatberg” weighed the same as 11 double decker buses and stretched as long as two football fields. The fatberg weighed in 10 times larger than the one found in a sewer in Kingston, London, in 2013.

Next: What would have happened if they didn’t find it?

The fatberg would have risen up and taken over 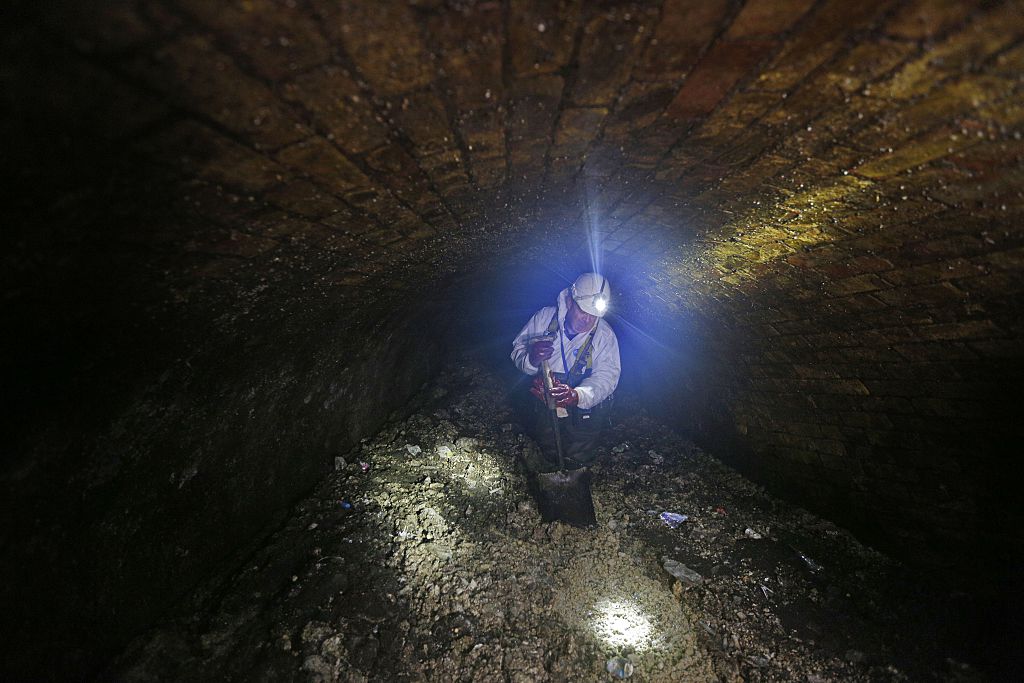 Sewer workers had to go down and break it up. | Adrian Dennis/AFP/Getty Images

Officials said if they did not discover the mass, it would have caused flooding in the sewer system underneath Whitechapel, east of London. That’s right — masses of raw sewage would have flooded the streets because people flushed garbage they shouldn’t have. Sewer maintenance workers armed with shovels and high-powered jets worked for weeks to break it up. At some points, they needed saws and the fatberg actually “ate” one of the tools.

Matt Rimmer, head of waste networks, said the task became as monstrous as the fatberg itself. “It’s basically like trying to break up concrete. It’s frustrating as these situations are totally avoidable and caused by fat, oil and grease being washed down sinks and wipes flushed down the loo.”

Next: The fatbergs follow a long and storied sewer history.

Noxious fumes led to the creation of the current system 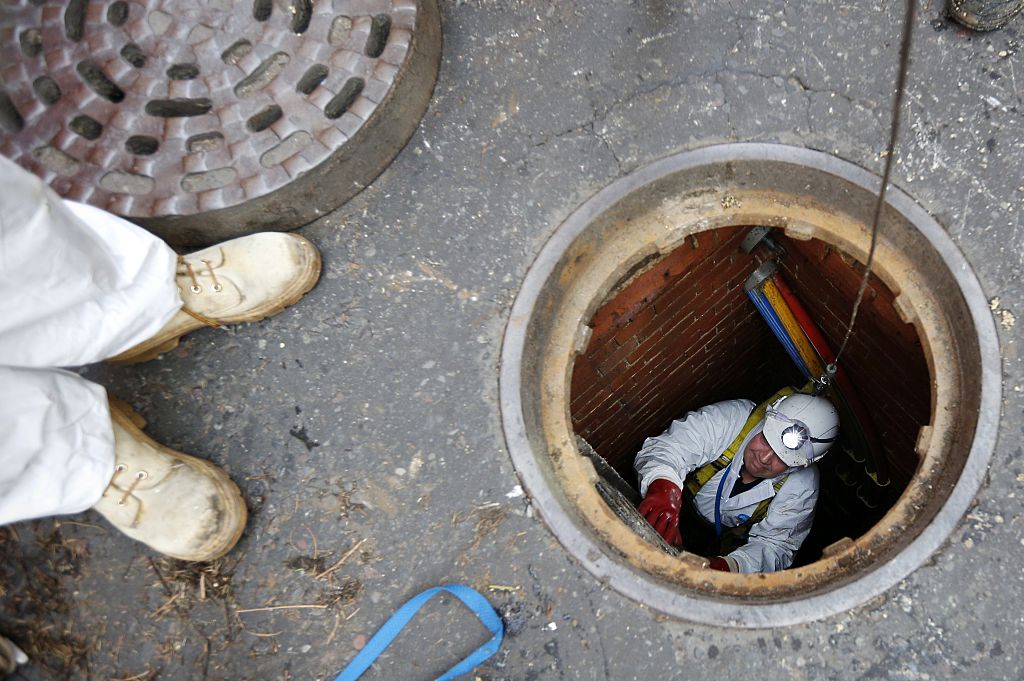 The sewer is struggling to keep up. | Adrian Dennis/AFP/Getty Images

The British sewer system dates back to the 19th century. Today, it struggles to keep up with modern plumbing and sewer needs, but it earned accolades as a modern feat at its construction. At the time, it really cleaned up the city’s threat of airborne and waterborne illness, as well as dangerous situations.

In 1846, noxious gases in the city’s river Fleet, which ran filled with sewage for about a century, detonated and destroyed three houses in the Clerkenwell neighborhood. The situation really came to a head in 1858, when the “Great Stink” nearly forced the House of Commons to evacuate.

Next: The London Museum commemorates this history. 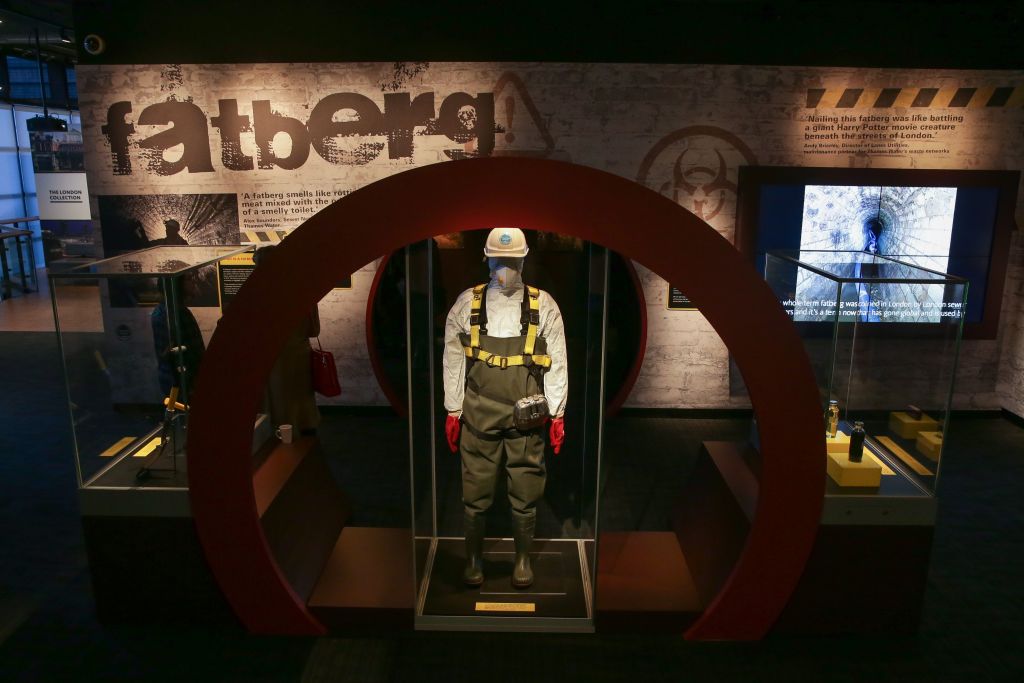 It’s as real as it gets. | Daniel Leal-Olivas/AFP/Getty Images

London museum-goers seem to really like their sewage. According to the museum, its collection already includes exhibits on London’s Victorian-era sewer system. “Here at the museum, we are all about reflecting the real lived experience of Londoners and it is part of our season exploring the highs and lows of London city life,” curator Vyki Sparkes said. “I don’t think you can get much lower than a fatberg.” A piece of the disgusting mass now lives in that exhibit, for visitors to enjoy.

Next: Getting it there took some doing.

It wasn’t easy to get The Beast into the museum 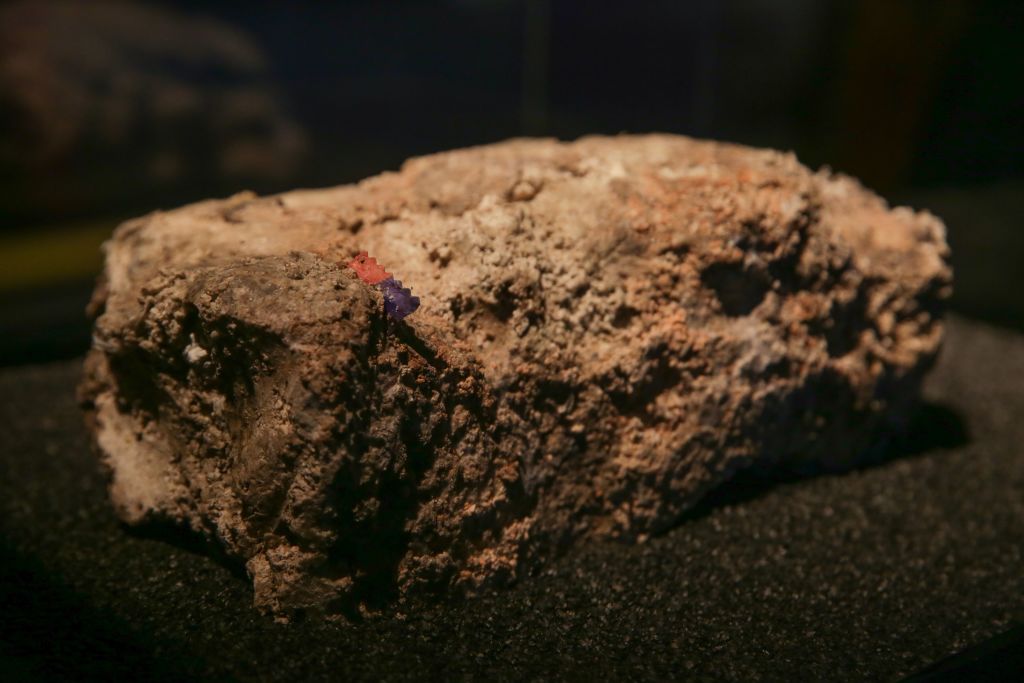 It is thankfully kept behind glass. | Daniel Leal-Olivas/AFP/Getty Images

Since workers broke up the fatberg into small pieces, in order to remove it from the subterranean system, not many large chunks survived. Museum curators also had to choose how to display the fatberg, which can still emit toxic gases and smells, well, amazingly bad. They chose to dry it, rather than freezing or pickling the specimen.

Sharon Robinson-Calver, who led the conservation team, said drain-fly larvae still live in the fat. The flies sometimes mature and fly out. “They seem quite happy,” she told The Smithsonian. “They’ve got a good food source. They pop out and fly around from time to time, which will be fascinating for visitors. It is part of the mystery of the fatberg, it’s the gift that keeps on giving.”

Next: The museum took precautions to keep the fatberg — and visitors — safe.

The fatberg probably won’t explode at the museum 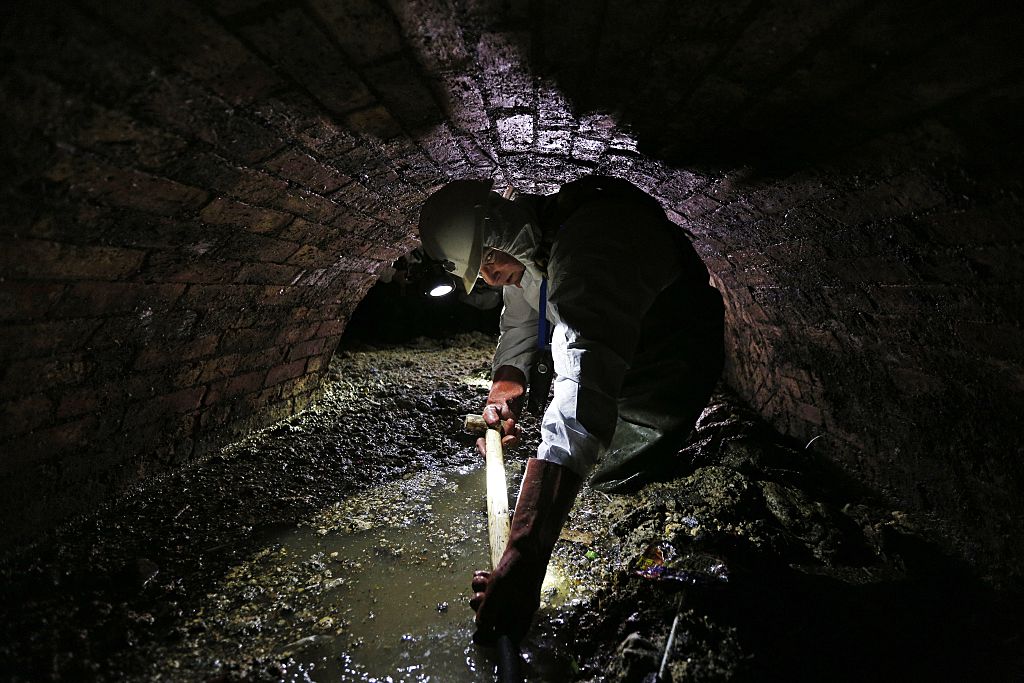 Museum conservation department member Andy Holbrook said the museum takes a “wait and see” approach to keeping the fatberg. Curators wanted a piece of a fatberg to display for a couple years when The Beast came along. They first X-rayed it to make sure it did not contain needles or any harmful objects. The samples have been sealed in special units, to prevent them from contaminating anyone.

Conservationists plan to keep it for six months, but they really don’t know what it will do during that time, or after. “I think we will wait and see,” he said. “It might explode. It might turn into a hundred million flies. We don’t know.” He paused. “I don’t think we are completely committed to keeping it.”

Next: The grossest thing at the London museum aims to educate visitors.

Let this serve as a lesson to all sewer-users 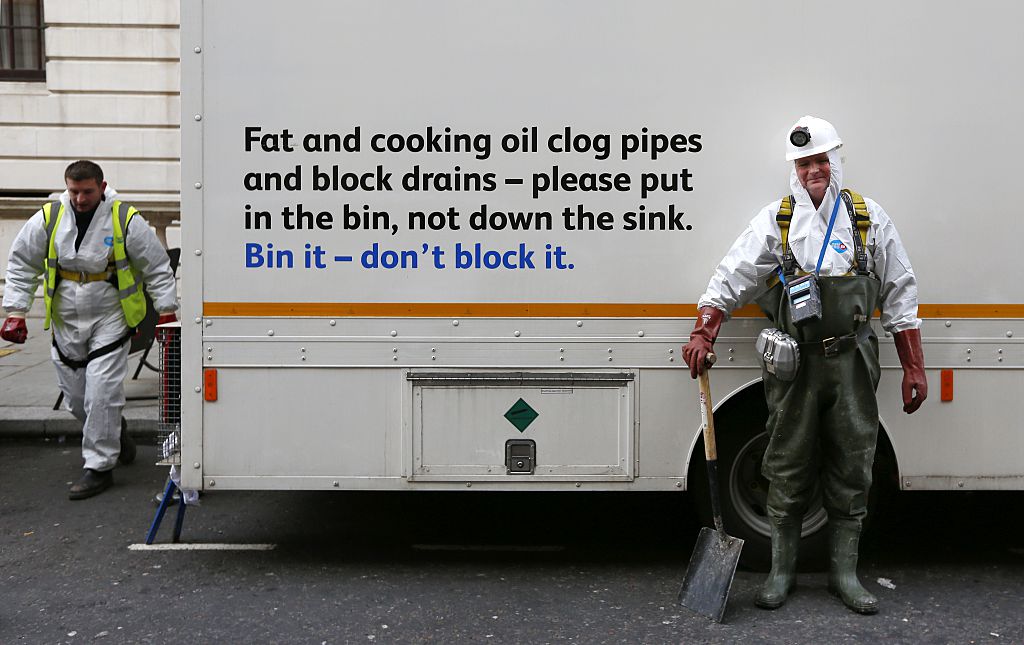 She’s hoping it serves as a warning. | Adrian Dennis/AFP/Getty Images

Becky Trotman at Thames Water told the BBC she hopes the display raises public awareness about the sewer system. So many people abuse their sewer privileges, but they need to remember that what they flush does not just disappear. “This display is a vivid reminder to us all that out of sight is not gone forever,” she explained. “So please help keep London and all the sewers flowing — don’t feed the fatberg.”